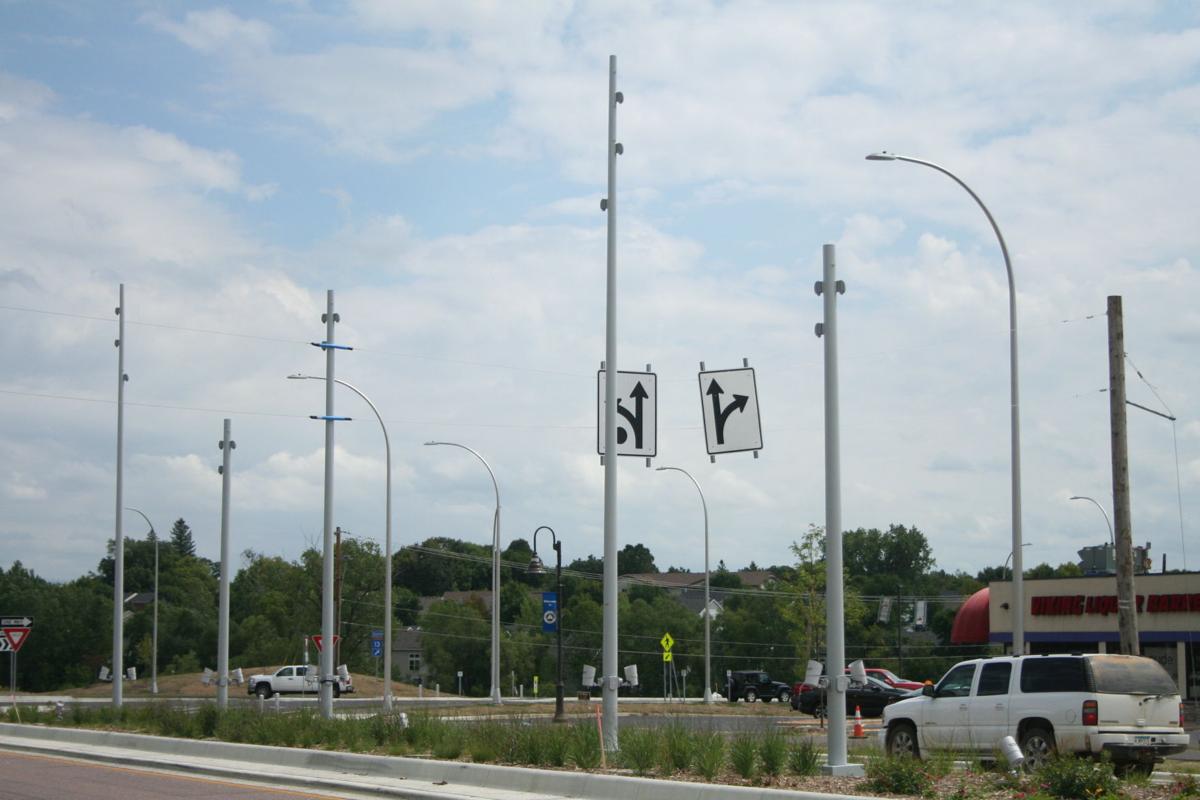 Poles placed in the median of County Road 21 in downtown Prior Lake will soon be strung with cables and lights to resemble sail boat masts. The center median monuments are some of the city’s final touches to the downtown Prior Lake reconstruction project. 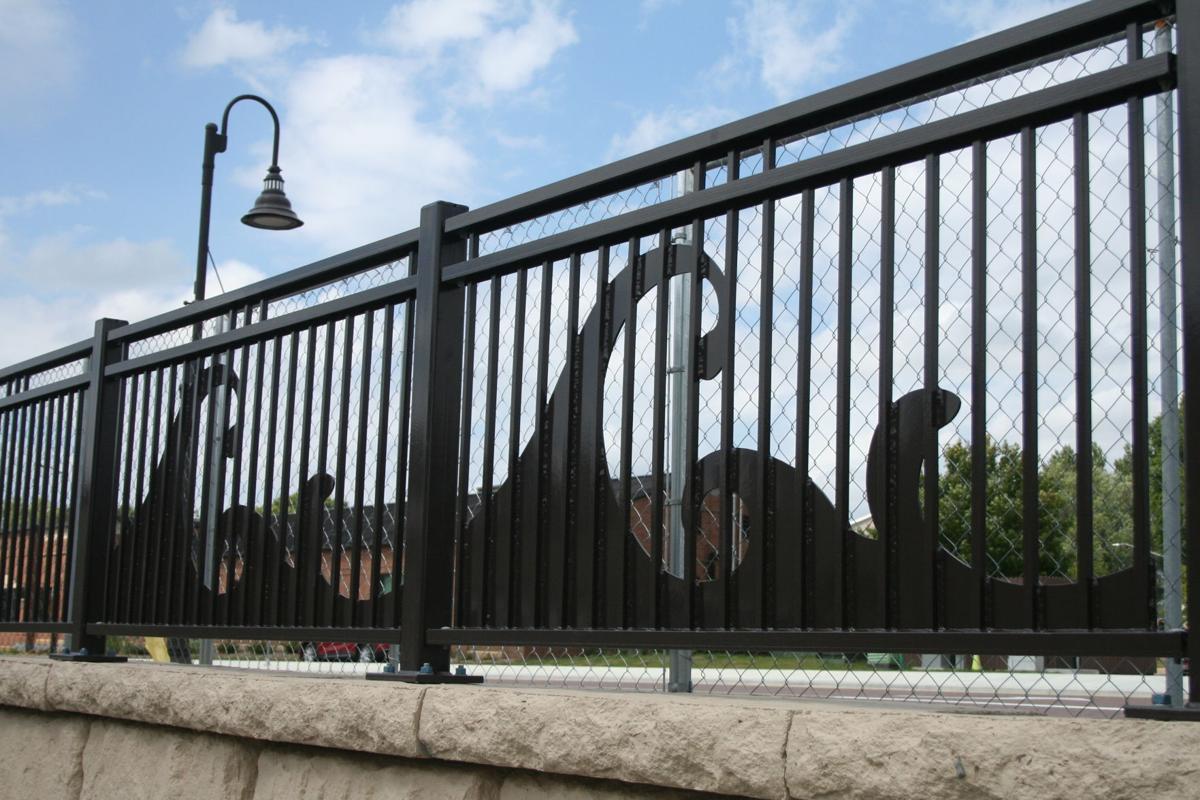 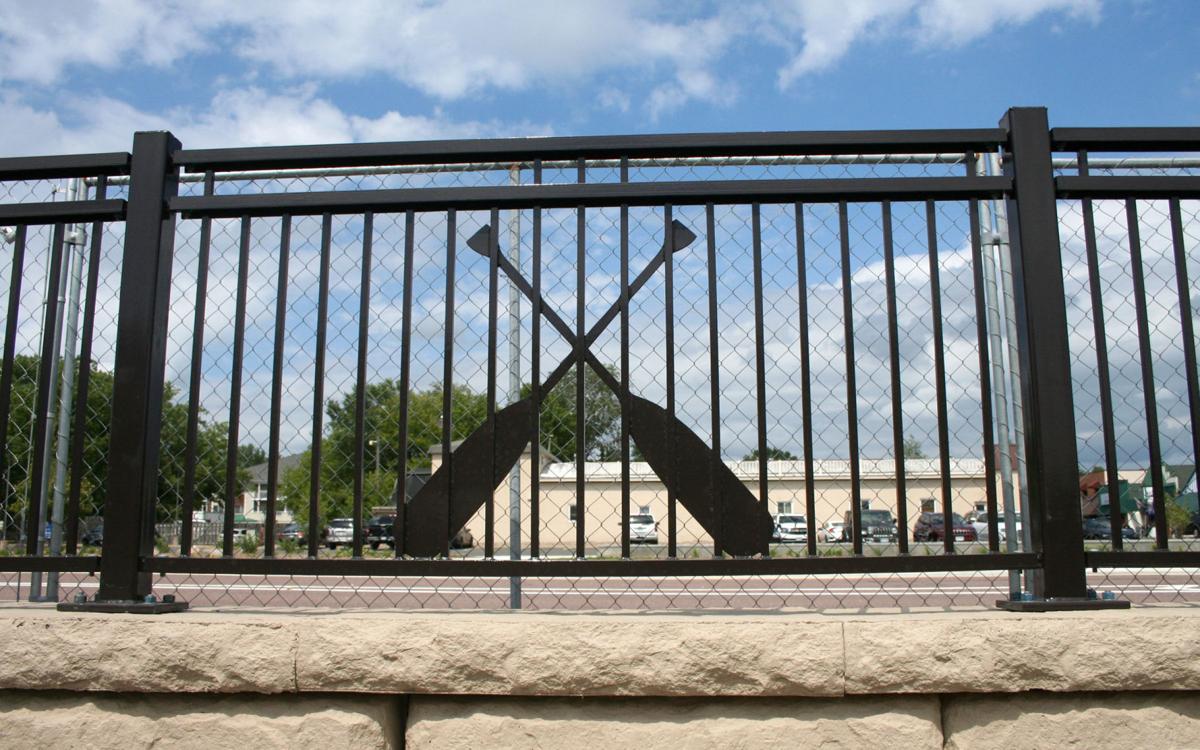 Decorative railing has been installed in Prior Lake as part of the city’s downtown construction project. The streetscaping elements are expected to be complete by mid August.

Poles placed in the median of County Road 21 in downtown Prior Lake will soon be strung with cables and lights to resemble sail boat masts. The center median monuments are some of the city’s final touches to the downtown Prior Lake reconstruction project.

Decorative railing has been installed in Prior Lake as part of the city’s downtown construction project. The streetscaping elements are expected to be complete by mid August.

Downtown Prior Lake is looking different as of late with the completion of the construction on County Road 21, a mural welcoming residents and visitors and now the installation of various streetscaping elements.

The community may also have noticed a new kiosk on the corner of County Road 21 and Main Avenue, decorative railing installed along the road and steel poles placed in the median.

“What we’ve got going is really the final details to the road to downtown Prior Lake,” said Prior Lake Mayor Kirt Briggs.

The five poles of different heights placed in the road median will soon be strung with LED lights to resemble sailboat masts.

“They are a reflection of what is the city of Prior Lake logo that being the sailboat and the masts that would hold up the sail,” Briggs said.

Decorative railing along the roadway features nautical images such as waves and oars, adding to the town’s “lake life” atmosphere.

A banner pole system is also in the midst of being installed over County Road 21 and will display rotating signage on upcoming events in Prior Lake.

“That small town feel is something that is part of who Prior Lake is and the banner poles communicate that like nothing else,” Briggs said. “Whenever you see a waving banner across a roadbed that truly goes back to what were times past.”

While the first message to be displayed on the banner is still in the works, it will be in support of small businesses and shopping locally, he added.

The streetscaping elements are meant to be reflective of Prior Lake’s two mottos: “A wonderful place to live, work and play for a lifetime” and “A vibrant and welcoming life-long community, offering a high-quality of life and a small town feel.”

“For me this was always going to be a road to Prior Lake not a road through Prior Lake and so now it truly will be special, impactful and the hope is it will create an emotive feel when you see the mural, the masts, the banners,” Briggs said. “Because anyone who’s seeing Prior Lake for the first time or if they’re seeing it for the thousandth time, they’re going to go, ‘this is a special place.’ It’s not like any other community that they’ve driven through.”

The vision for what Briggs calls the “community corridor” came from community members themselves.

The first meeting held in regards to the corridor improvement project was a visioning workshop, explained Maddie Dahlheimer, a landscape architect with Bolton & Menk who served as consulting designers and project engineers.

Workshop attendees, made up of stakeholders from the City of Prior Lake, Scott County, the Shakopee Mdewakanton Sioux Community, community members, businesses and residents, were given crafting materials and asked to build two different models. One model focused on their favorite memory of Prior Lake and while they were asked to build their ideal street for the other.

“That was the first meeting before we started talking about any engineering or traffic studies, it was very important for us to meet with the community first and get their take on what are the issues here and what is the vision that we’re trying to create,” Dahlheimer said.

The first meetings for the corridor project began in 2017. It’s been a long process but a fun challenge that Dahlheimer hopes provides a “sense of arrival,” she said.

“A lot of work, a lot of time goes into it, but at the end of the day a lot of those elements aren’t really seen. A lot of the improvements that we make might be underground or might fade into the background as oh, that’s infrastructure, but when you talk about streetscape elements that’s the piece that stands out to people, that’s the element that’s going to communicate the character of the community and say, hey this is Prior Lake this isn’t Lakeville or this isn’t some other community. You have arrived in Prior Lake.”

The anticipated completion date for the streetscaping elements is mid-August, but when the banner will be complete is still up in the air, said Director of Prior Lake Public Works and City Engineer Andy Brotzler.

The total cost of the County Road 21 Downtown Prior Lake Reconstruction project was roughly $13.5 million. The cost for the information kiosk, landscaping such as the native grasses planted in the median, and the banners were included in the bid for the construction project. The Rotary Club of Prior Lake donated funds toward the $12,000 banner and pole system.

The median monuments were originally included in the bid for the construction project, but were deemed too costly and removed from the county project, Brotzler said. The city moved forward with a separate project bid for the installation of the monuments, which came in at about $220,000 which was the estimated cost for that portion of the work.

“Because anyone who's seeing Prior Lake for the first time or if they're seeing it for the thousandth time, they're going to go, ‘this is a special place.'"