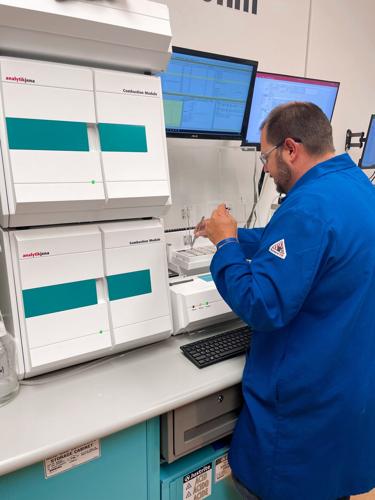 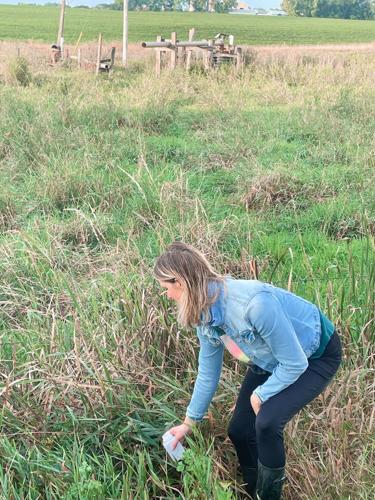 Nikki Christianson tests the water coming from a drain tile that fills the marsh on her property. 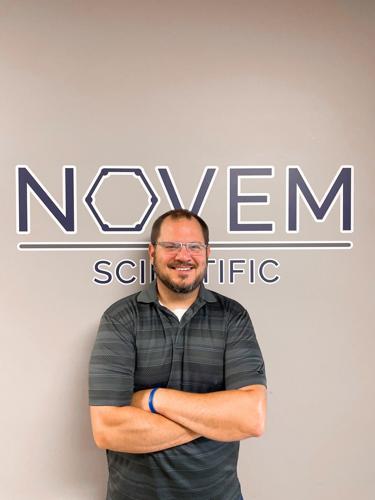 Andrew Christianson, CEO of Novem Scientific, located in Woodbury, stands in front of the company’s logo.

Nikki Christianson tests the water coming from a drain tile that fills the marsh on her property.

Andrew Christianson, CEO of Novem Scientific, located in Woodbury, stands in front of the company’s logo.

Prior Lake residents Andrew and Nikki Christianson are on a mission to raise awareness on groundbreaking testing that measures the total number of chemicals and pollutants found in Minnesota’s waterways.

The pair, who are married, recently formed a start-up lab — Novem Scientific located in Woodbury — which tests regularly for total PFAS in water samples. The lab works with any clients that want testing, including wastewater facilities, landfills and residents.

Andrew, CEO of Novem Scientific, said the company was built upon the notion that a lab should provide more than just numbers to their clients. He said they help walk their customers through their results.

“There’s a big push for regulations to help clean these harmful molecules out of our drinking water and lakes and rivers,” Andrew said. “That’s why Novem was founded to jump into consulting and testing services.”

According to the Christiansons, their lab is one of the only ones in the world capable of total PFAS testing.

‘Forever chemicals’According to the Centers for Disease Control and Prevention, per- and polyfluoroalkyl substances (PFAS) are commonly described as persistent organic pollutants, also known as “forever chemicals.” Residues have been detected in humans and wildlife, prompting concern. Because of their water and oil repellant nature, PFAS have been widely used in items such as food packaging, clothing and firefighting foam.

“There is still so much research that needs to be done with this emerging field of monitoring and testing,” she said. “Taxpayers’ dollars are being spent to test for only a limited amount of PFAS. They should be incorporating a total PFAS test to get the idea of how much is really in a sample in addition to their specific compounds.”

She added: “People care about where and how the government is spending their money. The public doesn’t know that all this money for testing may only be catching just a miniscule amount of the actual problem.”

According to previous reporting, in recent years, the MPCA has developed several new strategies aimed at preventing, managing and cleaning up PFAS pollution.

In Burnsville, groundwater samples at the Freeway Landfill found PFAS contamination at levels 714 times higher than the state’s health-based values, according to an MPCA study released last year. PFAS contamination was found at 97 percent of the closed landfill sites tested during the study.

The MPCA will also monitor for PFAS at the state’s active, permitted landfills and solid waste sites, including the Dem-Con Landfill in Shakopee and the Carver County compost facility at the Arboretum, according to the report.

Part of the solutionNikki Christianson added that undetected PFAS affects everyone if they are not monitored closely. She said the huge disparity in testing between Novem and government agencies needs to be known to the public.

“All the landfills around here and companies — they are only going to have to monitor less than one percent of the total PFAS compounds in their wastewater and leachate,” she said. “That is a lot of PFAS that could be seeping into our groundwater, streams, etc., that isn’t being accounted for. It affects us all.”

Andrew Christianson said their goal is to highlight the highest levels of pollutants in different kinds of waterways to help agencies find solutions to repair contaminated water.

“We do testing daily of groundwater, surface water, wastewater and we’re helping gain the data that will shed the light on some of these problems so that we can look further into it,” he said. “Novem is not really in the business of how to take care of the problem but we help those people by giving us a sample and we can tell them when it’s gone.”