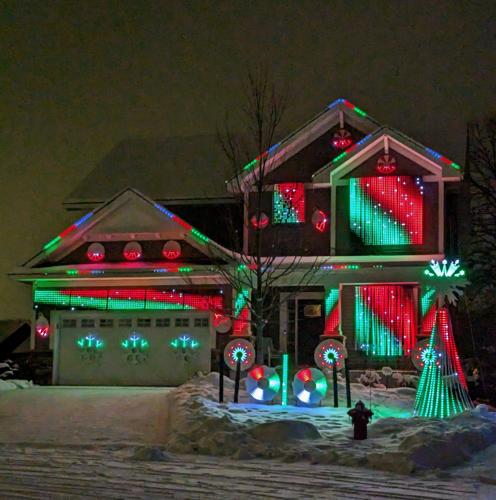 The Lights at the Cove, located at 3490 Cove Point Cir. NW in Prior Lake, returns for the seventh year in a row to dazzle residents and visitors with their festive holiday light display that is synced to holiday music. 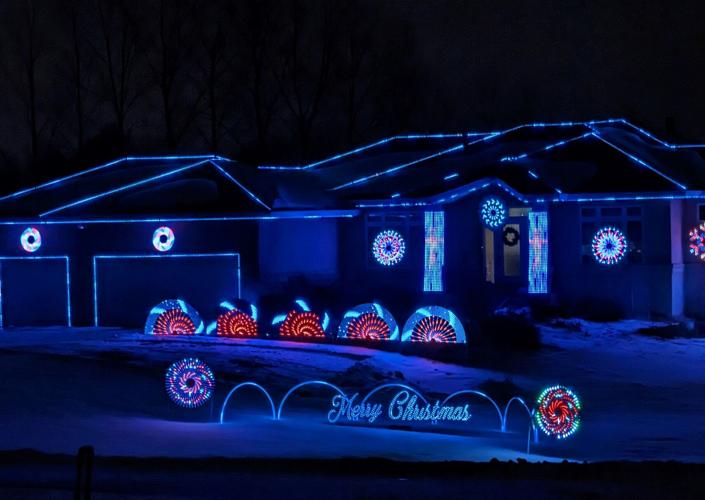 Lights on Mushtown, located at 17881 Mushtown Rd. in Prior Lake, lights up during a holiday light show. 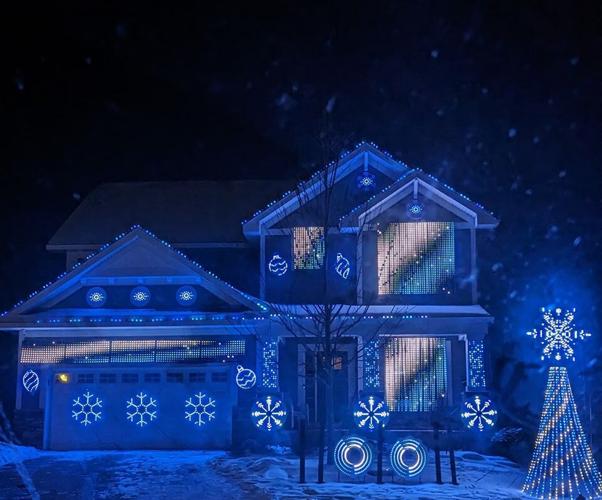 The Lights at the Cove, located at 3490 Cove Point Cir NW in Prior Lake, lights up the block with its festive holiday light display that is synced to holiday music. Spectators can tune in at 91.9 to listen. 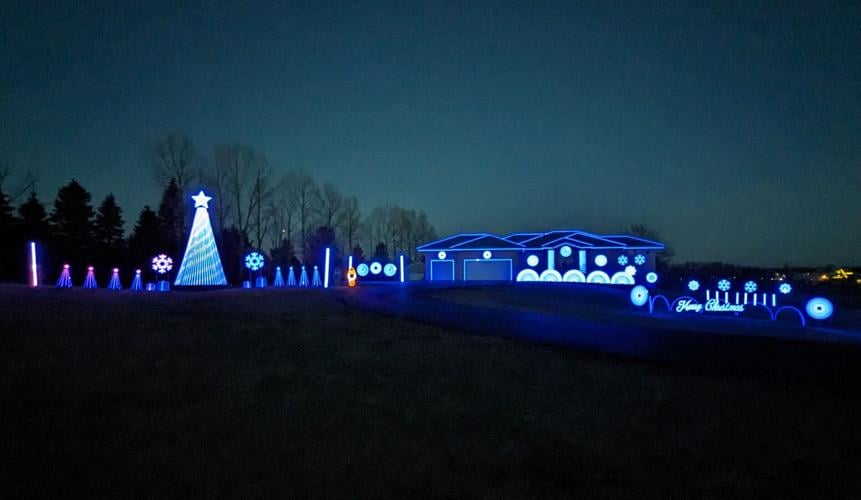 Lights on Mushtown, located at 17881 Mushtown Rd. in Prior Lake, welcomes spectators to watch his spectacular light show every night until Jan. 7, 2023. 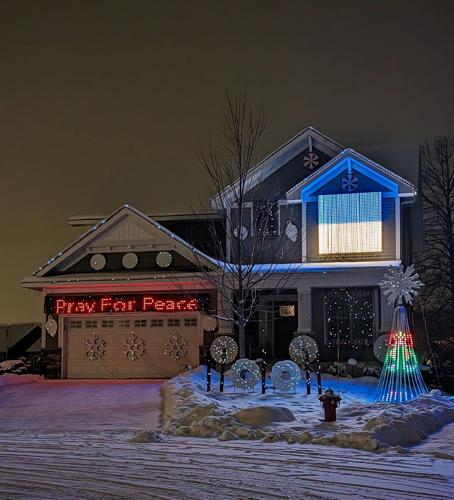 Lights at the Cove, located at 3490 Cove Point Cir NW in Prior Lake, shines bright during a holiday light show.

The Lights at the Cove, located at 3490 Cove Point Cir. NW in Prior Lake, returns for the seventh year in a row to dazzle residents and visitors with their festive holiday light display that is synced to holiday music.

Lights on Mushtown, located at 17881 Mushtown Rd. in Prior Lake, lights up during a holiday light show.

The Lights at the Cove, located at 3490 Cove Point Cir NW in Prior Lake, lights up the block with its festive holiday light display that is synced to holiday music. Spectators can tune in at 91.9 to listen.

Lights on Mushtown, located at 17881 Mushtown Rd. in Prior Lake, welcomes spectators to watch his spectacular light show every night until Jan. 7, 2023.

Lights at the Cove, located at 3490 Cove Point Cir NW in Prior Lake, shines bright during a holiday light show.

Two Prior Lake homes have been shining bright this holiday season with their elaborate display of synchronized lights and holiday music for the community to enjoy.

The Pexa family’s Lights at the Cove, located at 3490 Cove Point Cir NW, return with their perfectly synced Christmas lights for the seventh year in a row, dazzling residents and visitors with their festive light show which runs nightly from 5 to 9 p.m. until Jan. 1, 2023. There will be no shows on Christmas Eve or Christmas Day due to parking to allow neighbors to spend time with their families.

Jessica Pexa said she and her family usually start prepping in spring or early summer.

“We decide on elements and if new lights are needed in springtime and place the order fairly early in the year. We then start listening to holiday music and soliciting requests from family and friends so Mark can begin sequencing,” Jessica said. “The sequencing process can take about eight hours per song because he chooses the colors and effects and which elements to apply them to. Some people purchase sequences and upload them to save the work of this step, but Mark prefers to do it himself, and I think it’s incredible how he can make the musical moments pop with the lights.”

Mark Pexa, Jessica’s husband, said that setting up the light display is a lot more intricate then it looks. There are many things and parts that go into installing the lights before turning on the switch.

“I’m fortunate enough that there’s a really robust community out there with lighting enthusiasts. There’s a specific software that you can use for actually sequencing it and that software is called xLights,” Mark explained. “That’s where you do the work to do the sequencing of the music. You buy the music online like Amazon or wherever and you import that in and then program to actually sequence the music to the lights. Everything you see on the house you have laid out through this program.”

Jessica added that both she and her husband work in the information technology field and have knowledge on how to program.

“You upload a picture of your house and you put it in this program and you can draw within the application where the lights are going to go and the ornament shapes,” Jessica said. “He’s able to assign them within the program and basically apply the effects that way. It’s the coolest program because you can pick the colors, the twinkles and all the effects and import some graphics. This year we have Frosty up on the bedroom windows and he’s even moving his mouth when he’s singing. It adds so much to it.”

Jessica said her family started the Christmas light show in 2016 and have been adding onto it ever since.

“We started the year we moved in — in 2016,” she said. “But with this hobby, you start off small and then you kind of add on to things as you go. So, it’s been really fun to bring more into it every year.”

Mark said his mother, who passed away in 2019, is what inspired him to set up the high-tech light display.

“Back in 2015, we lived in Belle Plaine at the time and I was bringing my mom home back to her apartment in Chaska and I was driving down the road and I saw in the distance this house just flashing and all these different effects,” Mark recalled. “I actually missed the turn because I was going too fast and I turned around and went back and into the neighborhood and just saw this house, it amazed me. They used a different technology that I currently use but it just captured the essence of being with my mom and she was just in awe of this house. That’s kind of what started it for me.”

Mark said when his family moved to Prior Lake, he would bring his mother to visit and she would watch the light show multiple times.

“I would bring my mom out each year half a dozen times for her to watch it and she would watch two to three shows at a time and she would just be amazed,” Mark said. “It wasn’t just about the lights and the music, it was actually about spending time with her and having that bond. It was really something special for her as well, and as our show has grown, so has the amount of people who see it. After a couple of years we started going out giving candy canes and we got to be able to talk to some of the people that would come out and see who they are.”

Jessica said setting up the light display each year has been fun her whole family including their two children ages 9 and 11, as it is for the whole community and they always look forward to it every year.

“Our kids have always loved it too. It was such a wonderful way for them to do an activity with their grandmother who passed away and just getting to work with my dad because he’s an engineer, recently retired, and he’s been really instrumental with helping with all the set up and figuring things out like a big puzzle,” Jessica said. “We’ve been really fortunate, we’ve met friends because of it and made connections here in the community. We’ve just been really lucky for all the good that it has brought.

As for how much it cost for the Pexa family to put on the light show every year, Mark said their electric bill surprisingly doesn’t go up that much because the lights are LED, but he did add that it is not a cheap hobby.

“From an electrical standpoint, each month we see about $20 to $30 a month or so for running the show itself. It can be expensive to get started in the hobby,” he said. “If I were to tally up with everything we have on the house, I would probably say we have $10,000 to $12,000 worth of equipment outside the house.”

Not only do the Pexa’s put on a holiday light show for the community but they also give back at the same time.

This year, the Pexa family is collaboarting with Toy Corner to collect donations and cash for the organization.

“It started when I was surfing Facebook one day and noticed that the organization had partnered with the Prior Lake High School Junior Optimist Club and I reached out to both the junior optimists and Toy Corner,” Jessica said. “Toy Corner were so thankful and we were able to gather toys and cash this year and it was really a nice collab. They’re a wonderful organization and we’re happy to help.”

Jessica added that visitors should not feel obligated to come with a donation, but if anyone is interested in giving back they can certainly drop off a donation in between shows.

Like the Pexa’s, Brandau said he and family, which includes five children, start early in the year to set up their holiday light display at his home located at 17881 Mushtown Rd.

“I build it slowly throughout the year to get me to the point where it all needs to go out,” Brandau said. “I slowly put it out over a few weeks. This year we had a nice weekend right before Halloween and that was the weekend I started dragging everything out.”

Brandau began his holiday light show endeavor in 2020 but said he has always decorated with traditional lights prior.

“I’ve always done traditional Christmas lights and I always added every year,” he said. “I wanted to do this set up every year and finally I said I was going to buy a couple of things and the Christmas before 2019, I bought the stuff for the next year and have been adding every year.”

Brandau also added the hobby can get quite expensive but totally worth every penny.

“It costs way more than it should. I prefer not to say the cost but it’s not cheap,” Brandau laughed. “We do it for the kids and family and the amount of community feedback we get of how much their families love it it, makes me want to pour more into it. When it comes to the bill, in reality it’s only about $15 to $20 for the month of December. It’s a lot cheaper to run the show than people think.”