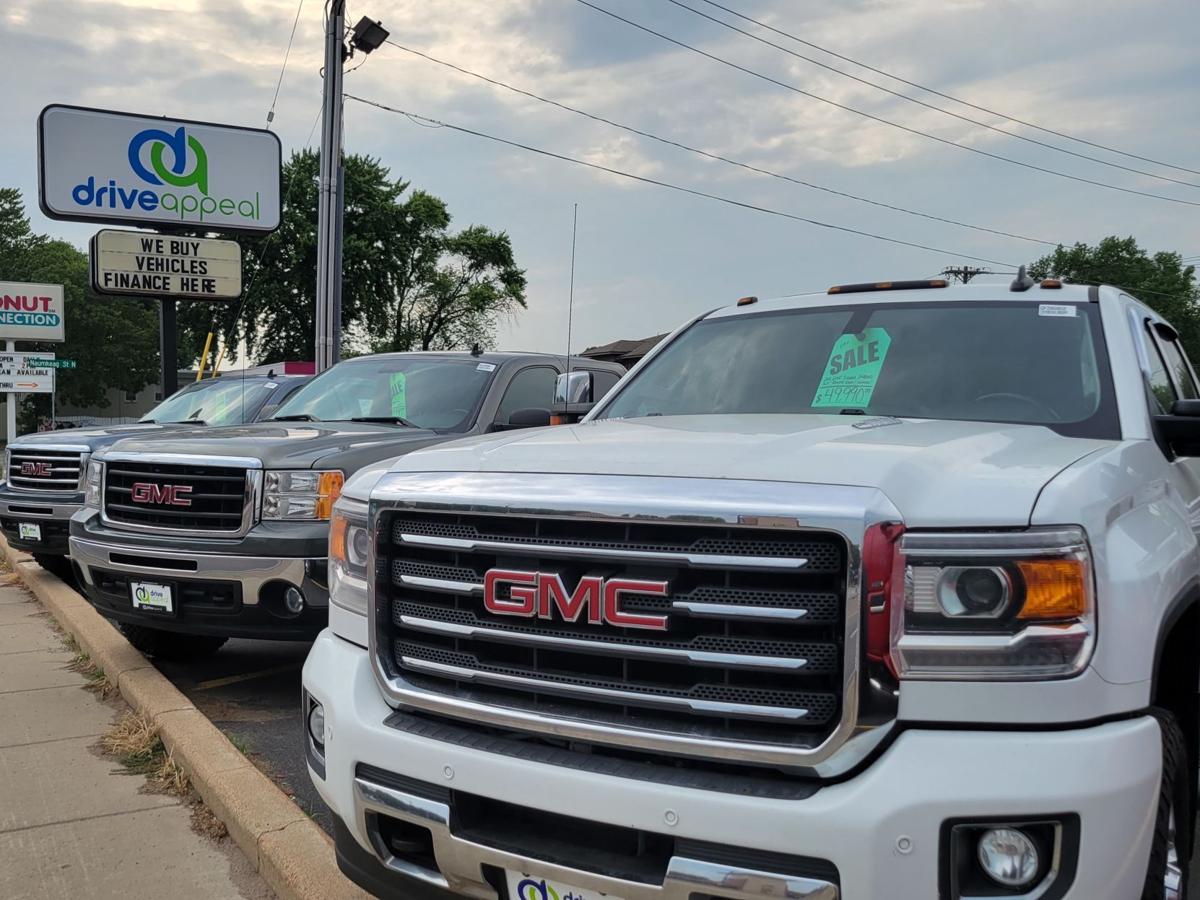 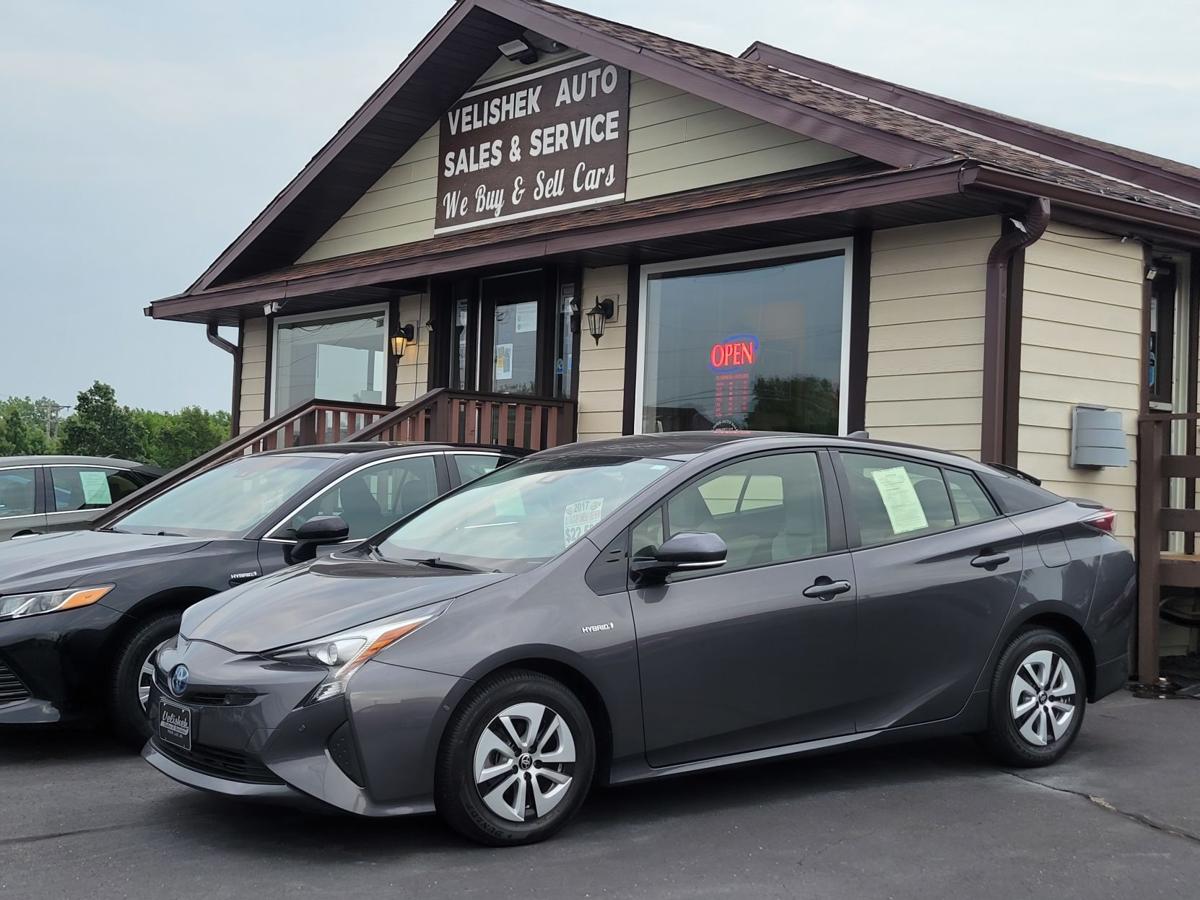 Used cars sit in the lot of Velishek Auto Sales Inc along Highway 13 in Prior Lake. 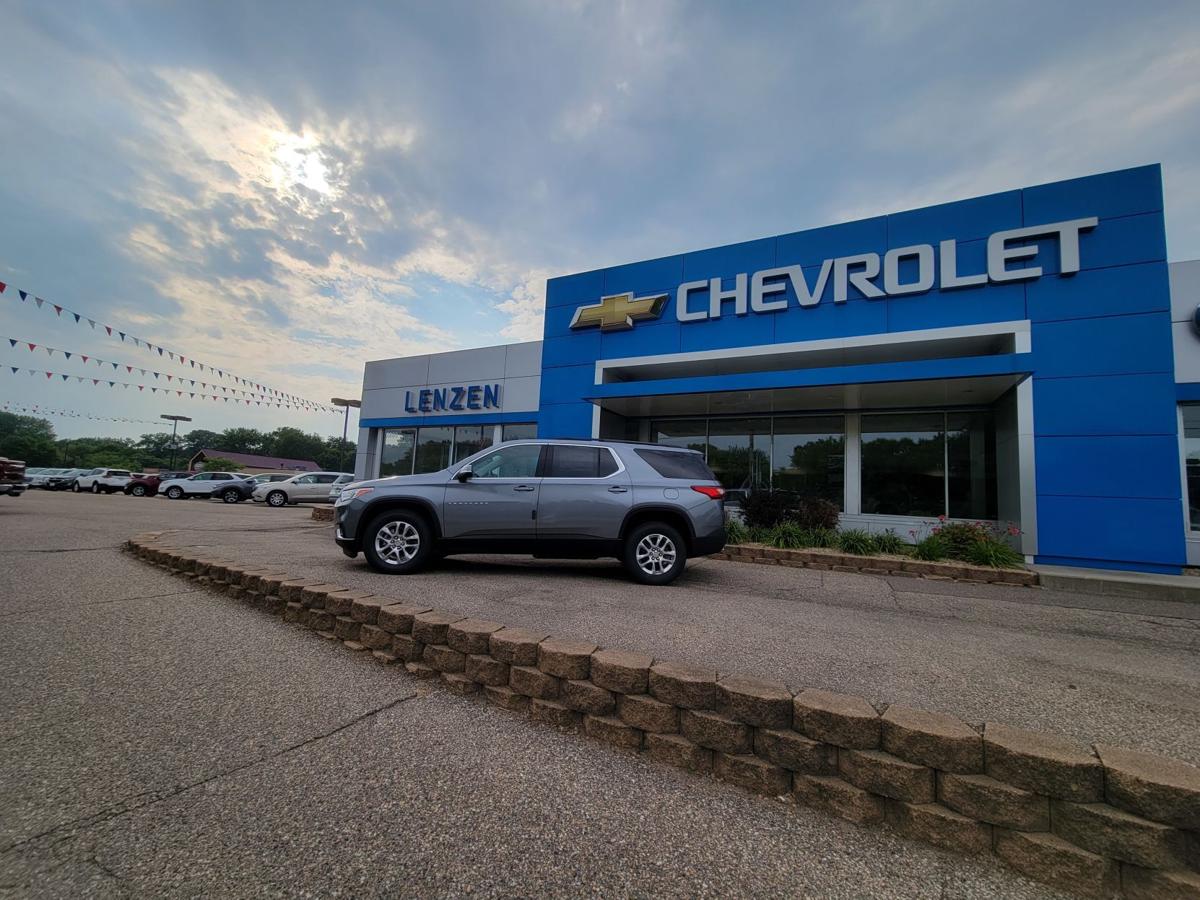 A vehicle for sale sits in front the Lenzen Chevrolet-Buick auto dealership at 2860 Chaska Blvd. in Chaska. 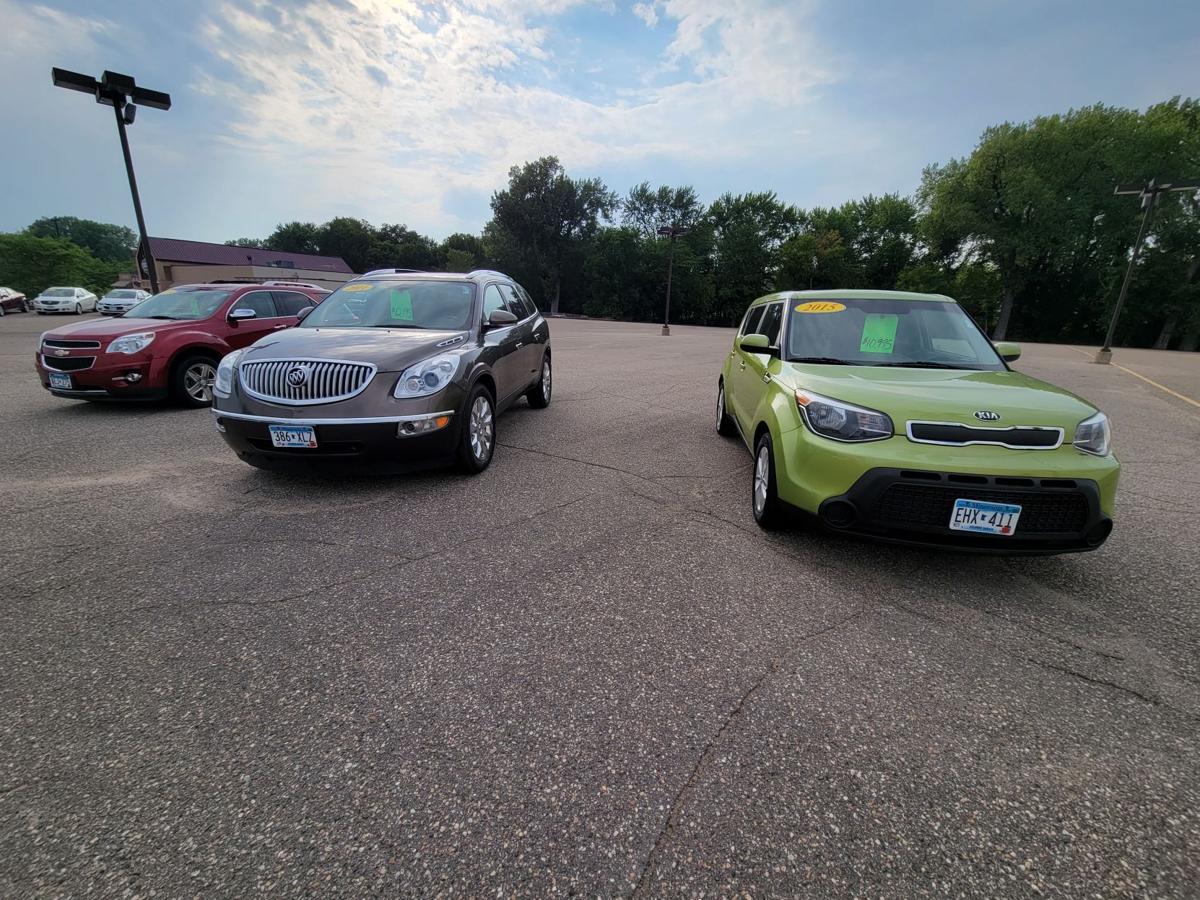 Used cars sits in the lot of the Lenzen Chevrolet-Buick auto dealership in Chaska. 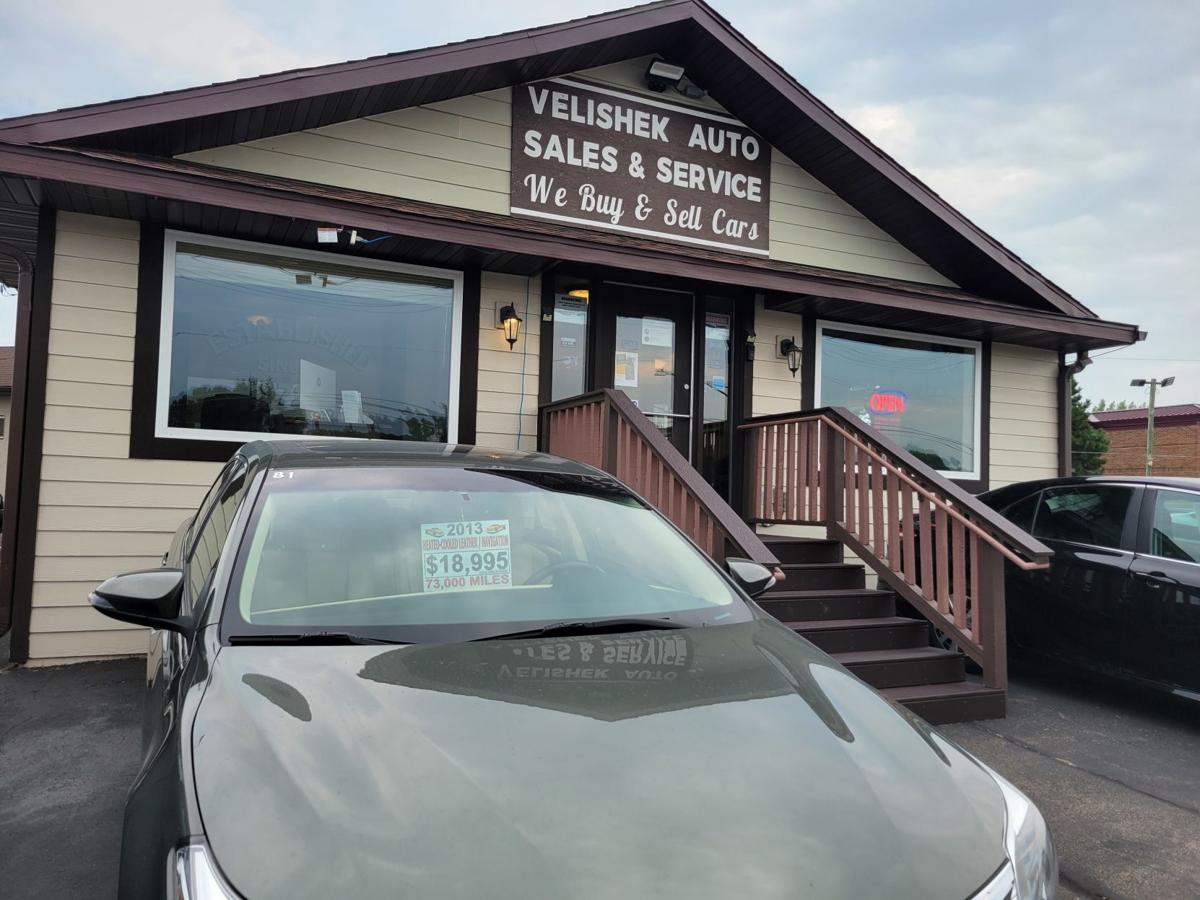 The price of used cars has surged during the past year according to Michael Sjulstad, sales manager at Velishek Auto Sales in Prior Lake. 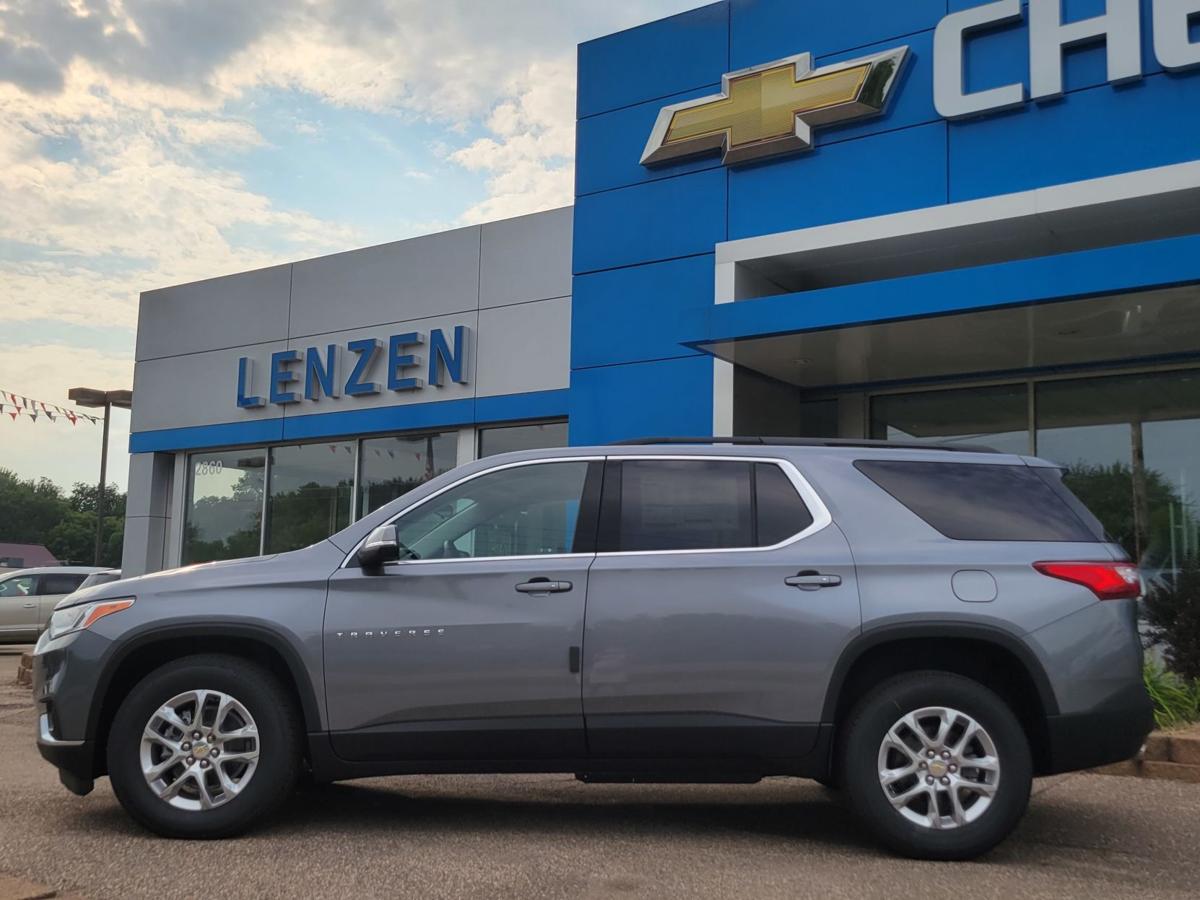 A vehicle for sale sits in front the Lenzen Chevrolet-Buick, Inc. auto dealership at 2860 Chaska Blvd. in Chaska.

Used cars sit in the lot of Velishek Auto Sales Inc along Highway 13 in Prior Lake.

A vehicle for sale sits in front the Lenzen Chevrolet-Buick auto dealership at 2860 Chaska Blvd. in Chaska.

Used cars sits in the lot of the Lenzen Chevrolet-Buick auto dealership in Chaska.

The price of used cars has surged during the past year according to Michael Sjulstad, sales manager at Velishek Auto Sales in Prior Lake.

A vehicle for sale sits in front the Lenzen Chevrolet-Buick, Inc. auto dealership at 2860 Chaska Blvd. in Chaska.

If you’re thinking of buying a sweet new ride this summer using stimulus check savings, you might want to rethink your purchase because new and used car prices are soaring nationwide due to a global microchip shortage.

The devastating chip shortage is affecting automakers and dealerships all over the world including the Twin Cities metro leaving dealers and consumers struggling to get their hands on vehicles.

According to experts and industry leaders, the shortage of computer chips — which modern cars need in order to operate everything from infotainment systems to special safety features and more — is being caused in large part by the pandemic, after auto factories briefly shut down production.

Ford, General Motors and Chevrolet are among the hardest-hit manufacturers, according to data by Automotive News. Ford has shut down production of 325,000 vehicles including nearly 110,000 units of the popular F-Series pickup truck. GM and Stellantis had to abandon 278,000 and 252,000 vehicles, respectively. Following the F-Series, the most impacted models are the Jeep Cherokee, which shut down 98,584 units, Chevrolet Equinox lost 81,833 units, Chevy Malibu lost 56,929 units and the Ford Explorer, which had to forfeit 46,766 units.

“It’s hard to get anything with this chip shortage on all the vehicles, these new vehicles haven’t been coming out,” said Michael Sjulstad, sales manager of Velishek Auto Sales in Prior Lake. “We’re sitting anywhere from 85 to 100 vehicles on our lot when we usually have 130. Everybody is trying to buy inventory right now but the prices are so high it’s hard to get your hands on them.”

Prices through the roofUsed car prices climbed a staggering 30% while new car and truck prices climbed about 5% over the past year through June according to the Consumer Price Index report from the U.S. Department of Labor.

Rocky Dehmlow, owner of Rod Dehmlow Auto Sales & Services in Prior Lake, said the surge in prices is affecting sales due to not having enough product to sell and used car prices being too high. He said most of the used autos he sells are in the $23,000 to $28,000 range. A used car that would normally cost $20,000 is now higher in value by $4,000 to $6,000.

“I’m also just running low on inventory,” Dehmlow said. “We have about 25% of what we normally would have in stock. This is bad for the consumer as well because people are having to pay way too much for a vehicle. It is what it is if you have to get one, but much like the housing industry, it’s a little bit frustrating. You feel like you’re paying premium plus money.”

Joe Heim, store manager of Drive Appeal in Shakopee, has also seen an increase in prices over the course of the pandemic

Dehmlow added that the microchip shortage is worsened by a strong demand for chip manufacturers to supply chips for personal electronics — such as phones and laptops — as more people worked from home during the pandemic.

the boxWith this said, local auto dealers are thinking outside the box trying to sell anything they can. Some dealers are calling and emailing former customers offering to buy back cars they sold a year or two earlier because demand for used vehicles is as strong as it is for new cars.

Dehmlow is also looking into different ways to add and sell more inventory at his dealership.

“We’re working harder to get vehicles in trade when someone does come in to buy a vehicle,” said Dehmlow. “We’re really trying all different things, trying to handle a little bit more specialty stuff than what we usually do and something a little different that not every dealer has got.”

“It’s not really affecting us, it’s affecting the customers because they’re paying more money because the values in cars are getting higher. We just go with what the market is,” said Jose Rubio, owner of Quality Motors Sales in Jordan.

Heim, at Drive Appeal in Shakopee, said costumers are more willing to jump the gun and buy whatever inventory is available.

“People are willing to pull the trigger a lot quicker if you have something they want because they might not be there tomorrow,” said Heim. “I would say find what you want if you need a new or used car but make sure you’re not overpaying because we won’t try and pay the ridiculous high prices and then make it up selling the car overpriced. We’re still trying to maintain reasonable prices. It’s just tough.”

Is there a silver lining?Sjulstad, at Velishek Auto Sales in Prior Lake, said a return to normalcy rests on the microchip manufacturers.

“It all depends when they can start making new chips for Chevy, Ford, Toyotas, etc. As soon as they start making some chips I think there will possibly be some more inventory,” said Sjulstad.

Dehmlow said he is hopeful that within the next 60 or 90 days things will start to turn around a little and start looking like it should again.

“We’re telling people about this every time they come in when they’re asking why we don’t have any cars in stock,” said Dehmlow. “I’m telling people, if you don’t absolutely have to buy a car then wait it out a little bit, you’ll get a better deal.”

Rubio said some customers have no choice but to buy a car even though they know they are expensive at the moment.

“I’m just trying to keep my prices the best I can so people can buy, that’s all we can do right now,” said Rubio.

Although Dehmlow said he thinks things will turn around within the next few months, some analysts and local dealers say it could stretch until 2022, but it will eventually resolve — it’s just a matter of when.

“I heard it can be up to a year before the microchip shortage is resolved,” said Heim. “However, the new car manufacturers have been still building the cars and setting them aside waiting for the microchips. So, I feel when they catch up they’re going to have to implant a lot of new vehicles to make room for 2022 models. I guess the outlook would be that it will kind of crush the high used car values that’ll drop pretty rapidly because people will be able to buy a brand new car for not a whole lot more than what they can get a used one for.”

As far as solutions go in the meantime, Heim said there really are none at the moment, all they can do is hope for the best for both auto dealers and consumers.

“Our hands are tied and it’s a competitive business. So, everybody is looking to do the same thing by getting cars as cheap as they can,” he said. “It’s just a matter of sourcing and being smart about what you pick and choose and not overpaying. That’s all we can do at the moment. The solution really isn’t in our control at all.”