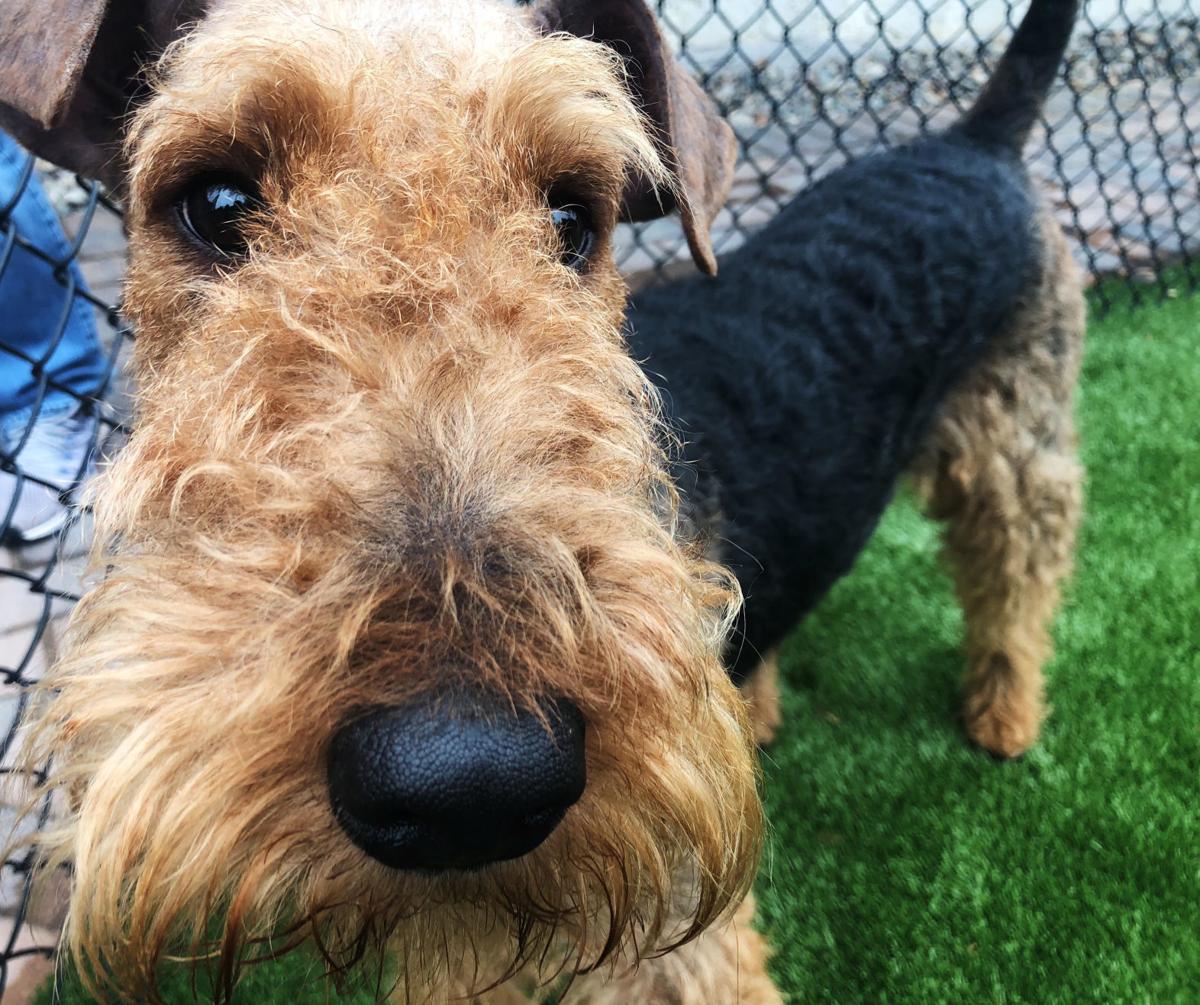 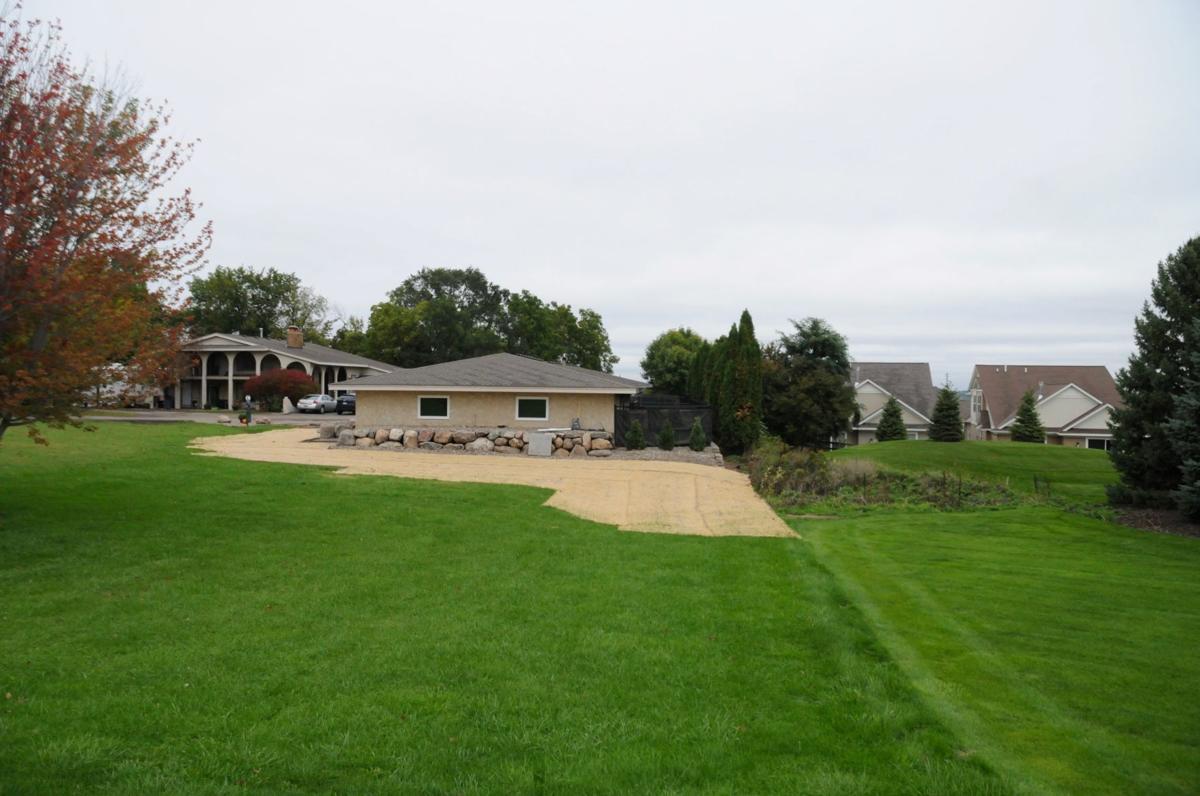 The Bluff High Kennels and the home of Wayne and Annette Masterson are separated by a landscaping barrier and less than 30 feet between the property lines. 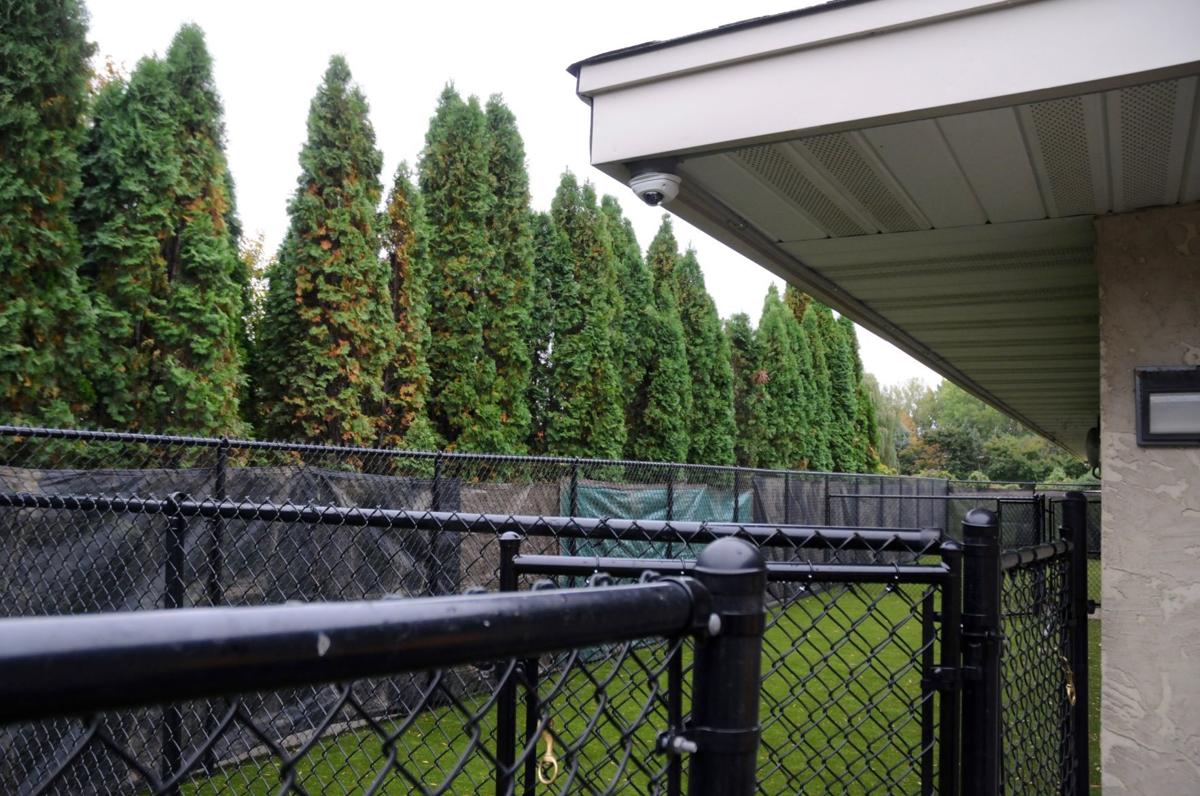 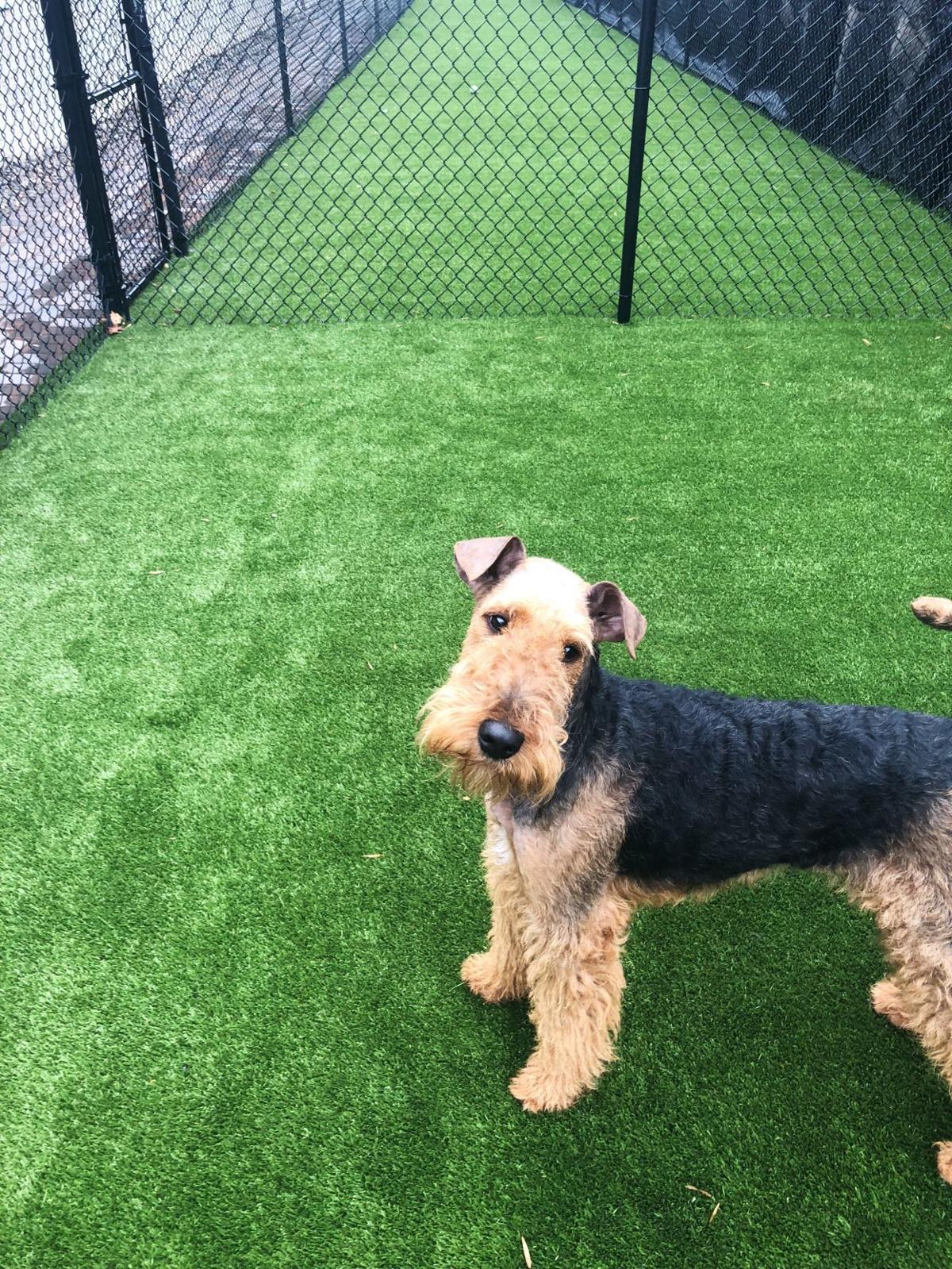 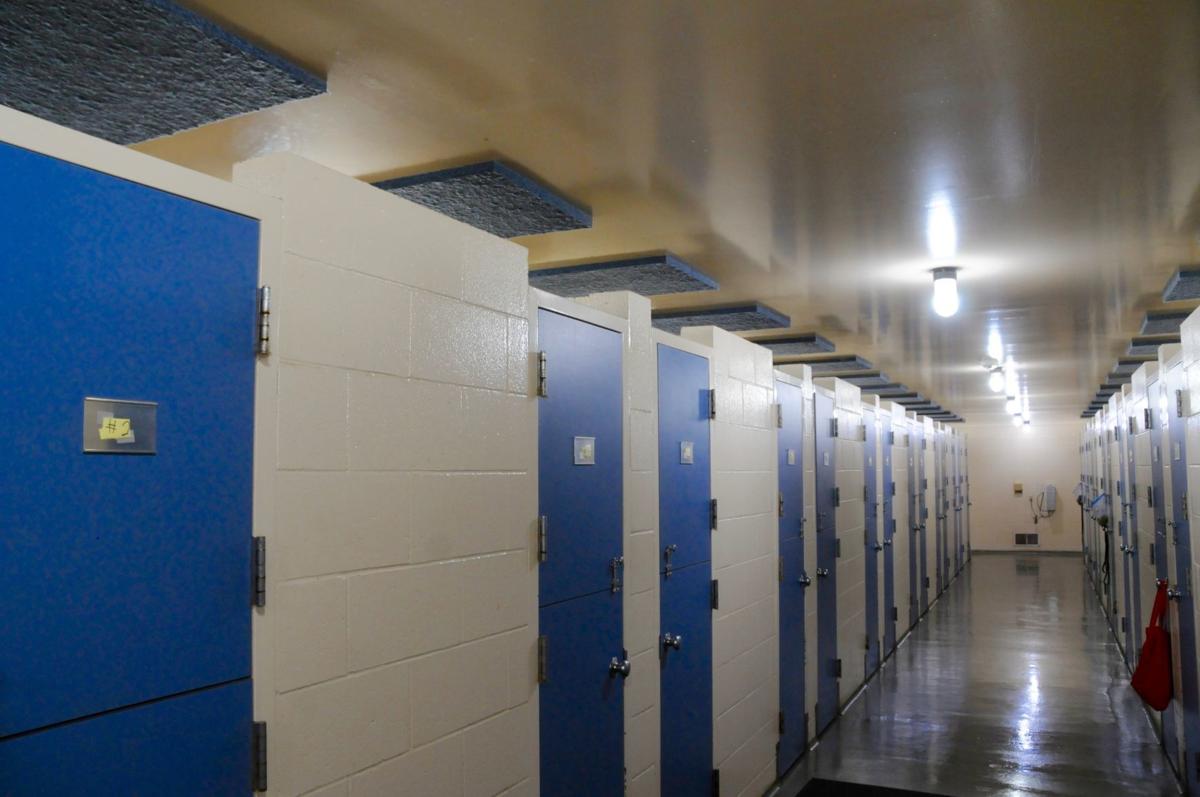 Doug Carlson, the owner of Bluff High Kennels in Savage, added acoustical tiles to help reduce echoing inside the kennel. 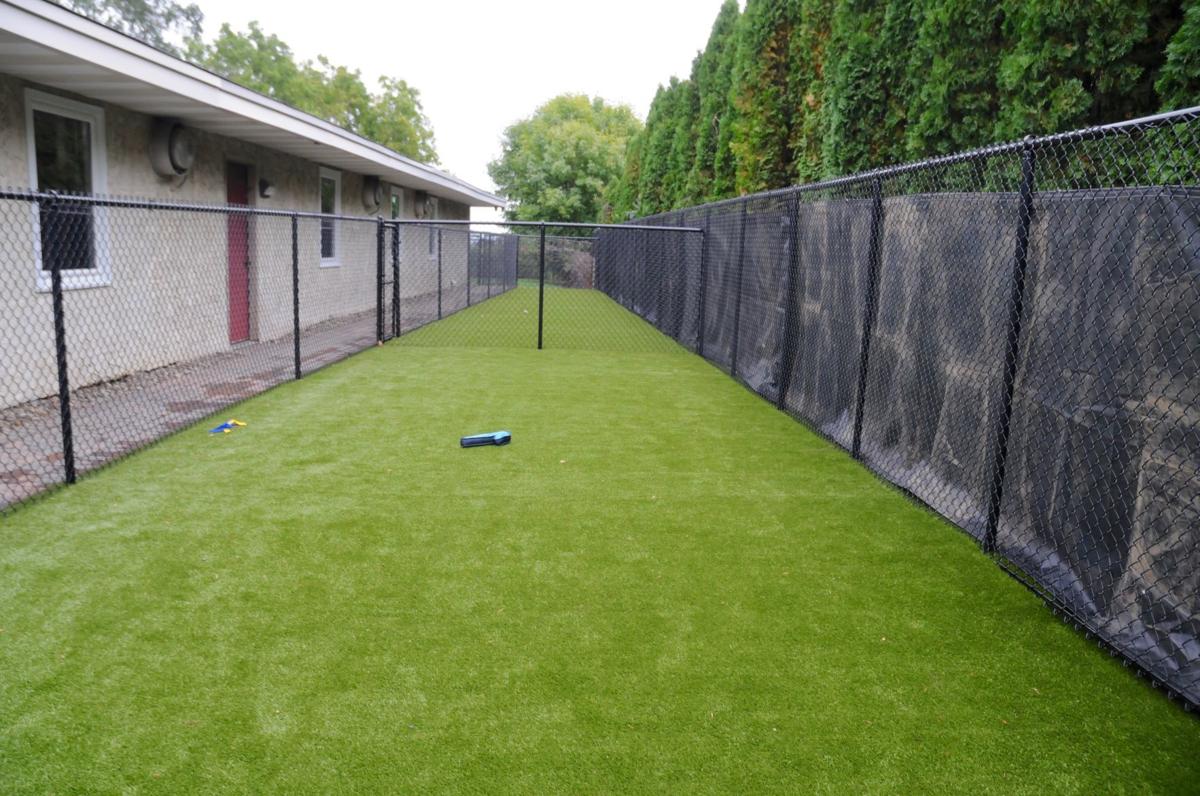 The Bluff High Kennels and the home of Wayne and Annette Masterson are separated by a landscaping barrier and less than 30 feet between the property lines.

Doug Carlson, the owner of Bluff High Kennels in Savage, added acoustical tiles to help reduce echoing inside the kennel.

Savage residents Doug and Mandy Carlson are putting the finishing touches on tens of thousands of dollars in improvements to their dog boarding business, Bluff High Kennels, that they hope will dampen the sound of barking.

In June, an amendment to their operating permit began holding the commercial kennel to residential noise standards in response to a legal battle waged by new neighbors.

The kennel’s improvements included installing acoustical tiles to the kennel’s ceiling and replacing all the windows and doors. Outside, the Carlsons leveled the land, replaced the fence and have begun installing sound-absorbing panels on it. They also replaced rock with antimicrobial canine grass.

Much of the work focused on the east-facing outdoor dog area that faces the neighboring residential area.

“We are trying to do stuff that helps the dogs, too,” Doug Carlson said in an interview early this month.

The kennel operated without a complaint for nearly 40 years. That changed in June 2017, when Wayne and Annette Masterson purchased a newly-constructed home in the Trout Run Preserve housing development on a dead-end private street. A landscaping buffer of trees, a boulder wall and around 20 feet between the property lines separate the home from the kennel building and outdoor dog enclosures.

In February 2018, an attorney representing the Mastersons urging city staff to terminate the kennel’s permit, arguing the Carlsons were non-compliant because of barking heard by the Mastersons.

In emotional testimonies given before the Savage Planning Commission and city council, the Mastersons claimed that constant barking could be heard from dogs at the Bluff High Kennels.

“As you can tell by the recordings, the nuisance we are experiencing is material,” Annette Masterson said during a May 10 Planning Commission hearing after playing recordings of barking dogs.

“It is definitely having adverse effects on my and my husband’s health and happiness, let alone the enjoyment of our property” she said, becoming choked-up.

In June, the Savage City Council approved a plan for enforcing residential sound restrictions, including the city’s habitual barking ordinance, on the kennel. The plan also included enforcing a sound standard known as NAC 1 by having city staff conduct quarterly sound studies of the property. Under the new rules, the kennel’s permit could be terminated after five noise violations are recorded in a rolling twelve-month period.

Savage Planning Manager Bryan Tucker earlier this month emailed Doug Carlson and said the site improvements look good and the efforts are appreciated. The outdoor dog runs near the Masterson’s home were not being used during the construction of the new fence. He added in the email, “For what it’s worth, the neighbors have contacted us to say that the temporary removal of the east side kennels has provided a respite from the outdoor barking.”

Doug Carlson said that this conflicts with Annette Masterson’s statements made previously before the planning commission, arguing they are “never released” from the barking noise because it comes from inside the kennel.

“None of it makes sense to me,” Carlson said. “I’m doing everything I can and I just don’t get it.”

The Mastersons didn’t respond to the Savage Pacer’s request for an interview. They previously declined requests for an interview and sent statements and answers to questions via email.

On July 1, a citation was issued to Doug Carlson for being in violation of the residential habitual barking code. Scott County District Court held a hearing on the citation last month. According to Carlson, a stay was placed on the citation — meaning he won’t have to pay the fee unless he receives another citation within a year. Carlson said he had to pay around $450 in court fees.

Documents for the citation weren’t available from the court online or from city officials by press time.

Doug Carlson said he isn’t hopeful that their problems are over.

“These dogs are our family,” Mandy Carlson said. “This is our home. We don’t want to cause waves with the city or anybody — we really don’t — but we also want to keep our business.”

The Mastersons legal argument stemmed from language in the kennel’s permit from the 1970s, which said the kennel should be soundproofed. In June, the city amended the Carlsons’ permit to clarify the requirements for soundproofing and to put forth a plan to hold the kennel accountable for barking that can be heard on adjacent properties.

The Mastersons blasted the city’s decision to amend the permit. Before the city reached that decision, Annette Masterson called the Carlson amendment request an “an application to obtain leniency and special privileges” and “an avoidance tactic that makes a mockery of our distress.”

In an email to the Savage Pacer on June 27, Annette Masterson declined to comment on their plans for further legal action.

Peggy Pallas lives directly across the street from the Mastersons in a home that is also nestled near the kennel’s property line. Pallas said she has never had any issues with barking or anything related to the kennel in five years of living in her home.

“I will stand in front of a judge with Annette on one side and Wayne on the other side and deny that there is habitual barking, and I live in the same place that they do,” she said.

She also said that the Mastersons spend roughly half of the year living in Arizona. Tax records confirmed that they own property in Arizona.

“I think it’s really sad that someone who isn’t even a full-time resident has caused financial and emotional distress on a young family for no reason other than she’s a bully,” Pallas said.

Pallas remembers working with a representative of Ron Clark Construction when she closed on her home. She said that all homeowners in the neighborhood signed a disclosure acknowledging the kennel’s proximity, and the Mastersons’ home was discounted in an effort to help sell the home immediately next to the kennel.

“We all had to sign a document, an informed document, that we were aware of and willing to live next door to a kennel,” she said.

In addition to being good neighbors, Pallas said that the Carlsons have always been kind people.

“Leave them alone, let them live their life,” Pallas said. “It just breaks my heart for them.”