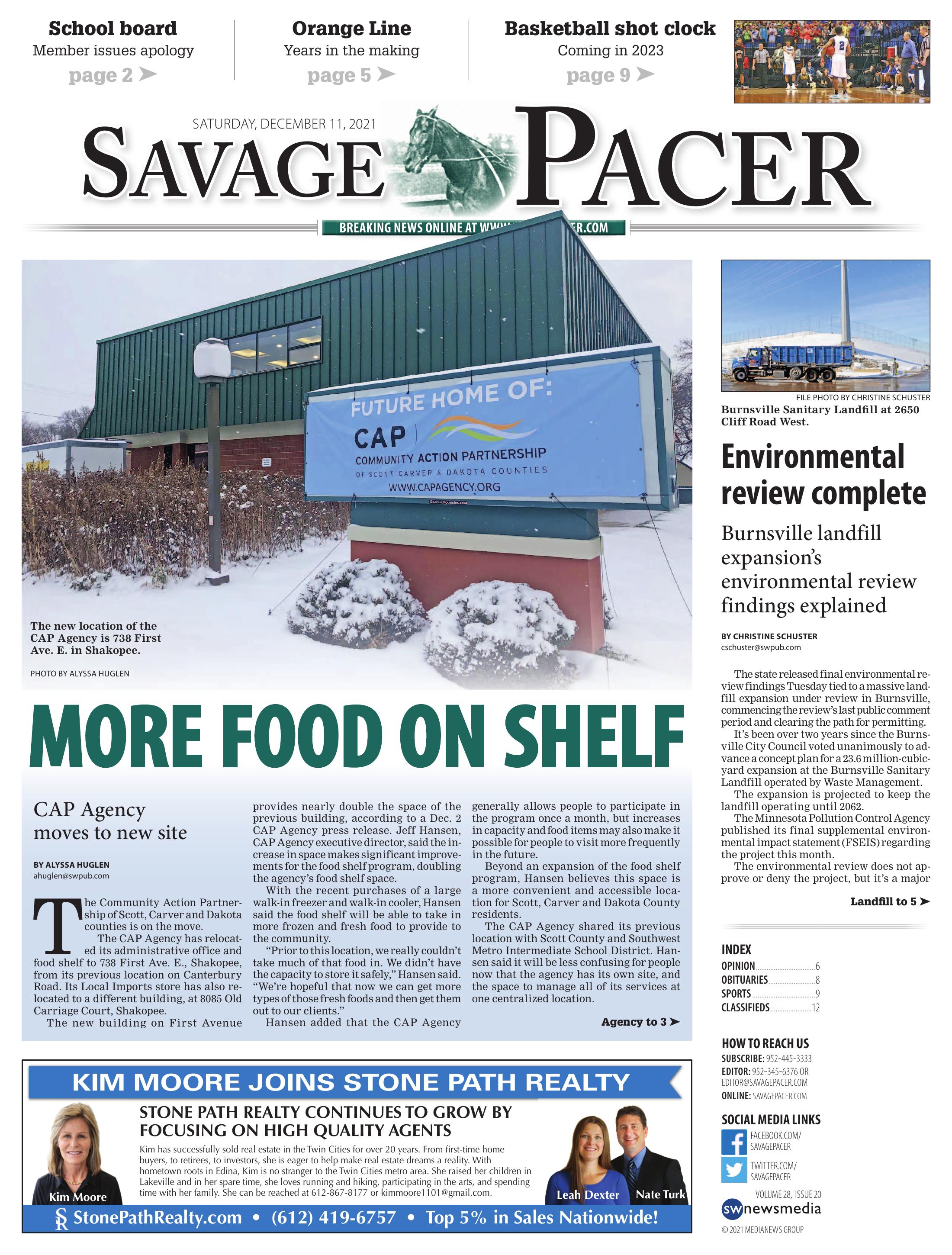 The new location of the CAP Agency is 738 First Ave. E. in Shakopee.

The food shelf space at the new CAP Agency location is double the previous size and designed like a typical market grocery store.

Increased space at the new CAP Agency location allows for a new walk-in freezer and cooler for its food shelf.

The Community Action Partnership of Scott, Carver and Dakota counties is on the move.

The CAP Agency has relocated its administrative office and food shelf to 738 First Ave. E., Shakopee, from its previous location on Canterbury Road. Its Local Imports store has also relocated to a different building, at 8085 Old Carriage Court, Shakopee.

With the recent purchases of a large walk-in freezer and walk-in cooler, Hansen said the food shelf will be able to take in more frozen and fresh food to provide to the community.

“Prior to this location, we really couldn’t take much of that food in. We didn’t have the capacity to store it safely,” Hansen said. “We’re hopeful that now we can get more types of those fresh foods and then get them out to our clients.”

Hansen added that the CAP Agency generally allows people to participate in the program once a month, but increases in capacity and food items may also make it possible for people to visit more frequently in the future.

Beyond an expansion of the food shelf program, Hansen believes this space is a more convenient and accessible location for Scott, Carver and Dakota County residents.

The CAP Agency shared its previous location with Scott County and Southwest Metro Intermediate School District. Hansen said it will be less confusing for people now that the agency has its own site, and the space to manage all of its services at one centralized location.

He anticipates other CAP Agency services, including housing support and childcare, to remain mostly unchanged as far as the agency’s ability to serve its clients.

According to Hansen, the CAP Agency served more people in 2021 than during the height of the pandemic in 2020. He said it goes to show that the agency’s work is incredibly important during this time.

“I think it’s more important than ever,” Hansen said. “It shows us that we’re a really vital safety net for a lot of people who live in our communities.”

Around a year ago, the other two organizations sharing the previous location with the CAP Agency began plans to move. Hansen said the agency would not have been able to afford staying there as the sole tenant, causing them to look into moving.

He said while initial plans took shape around spring this year, the moving process happened this fall.

Scott County and CAP Agency entered into a $1.7 million loan agreement in February for the purchase and renovation of a building. Then at a Nov. 16 meeting, the Scott County Board of Commissioners passed a resolution to increase the loan amount by $225,000, bringing to the loan up to $1,925,000.

Hansen said the CAP Agency has not taken all this money, but rather has borrowed as needed.

The city of Shakopee is purchasing the CAP Agency’s previous site. The agency’s revenue from the sale will go toward payment of the loan, according to county documents. The agency’s operating revenue and a mortgage against its new facility serve as additional security for the loan. From there, the county’s portion of the proceeds from this sale will help cover the remaining loan balance.

Scott County Commissioner Mike Beard commended county staff at the Nov. 16 meeting for working with the CAP Agency on a loan that “protects both the taxpayers and the CAP Agency and gives them every opportunity for success on that new building.”

Hansen agreed that the partnership between the CAP Agency and Scott County has been very helpful in helping the agency successfully move.

“I really want to highlight the partnership … [and] put through my gratitude to Scott County and their willingness to help us make this move as well as the CAP Agency staff and volunteers,” Hansen said.

The CAP Agency is not yet seeing people in person at its new location, but Hansen said services continue to run efficiently and safely like they have throughout the pandemic. Most of the agency’s staff are working and serving clients remotely, and the food shelf continues to provide a fully contactless experience for anyone participating in the program.

“The staff that we have at the CAP Agency is absolutely phenomenal and doing everything they can to try to meet everybody’s needs,” Hansen said. “We believe this work is incredibly crucial and incredibly important.” 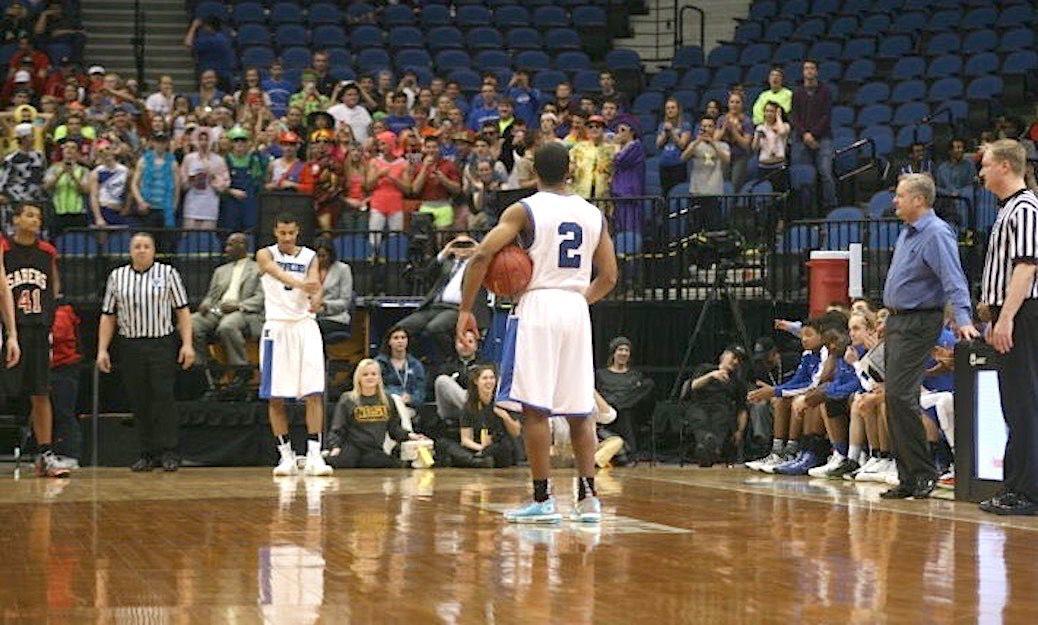 Hopkins holds the ball to take the last shot for the entire four-minute, first overtime session in the Class 4A state semifinals versus Shakopee in 2014. Hopkins won in four overtimes, but that game is often referred to as the need to adopt a shot clock for high school basketball.

It’s been over two years since the Burnsville City Council voted unanimously to advance a concept plan for a 23.6 million-cubic-yard expansion at the Burnsville Sanitary Landfill operated by Waste Management.

The expansion is projected to keep the landfill operating until 2062.

The environmental review does not approve or deny the project, but it’s a major procedural hurdle required by state law.

While the review determined the expansion would have “no impact on groundwater,” the findings come with a catch.

While the expansion itself doesn’t increase risks of groundwater contamination, the environmental review found the project could prevent future clean-ups of other contaminants found at the landfill, which could ultimately impact the groundwater.

The Burnsville Sanitary Landfill began its operations in 1962 before regulations required a synthetic liner be installed underneath the waste.

The Freeway Landfill and Dump, roughly two miles east, began operating without a liner during the same decade.

The Freeway Landfill closed in 1990, but the Burnsville Sanitary Landfill kept pace with changing laws and modernized its site to continue accepting waste with the addition of liners and leachate collection systems.

However, the unlined portion of the landfill remains.

State environmental officials say the unlined waste at the Freeway Landfill threatens water quality, but the contamination risk is held-off by water pumping operations at a nearby quarry.

Kraemer Mining and Materials, which borders both the Burnsville Sanitary Landfill and the Freeway Landfill, pumps out millions of gallons of groundwater each day in order to mine limestone.

The pumping operation provides municipal water supply to Burnsville and Savage, and it also artificially lowers the area’s water table.

So, what about the unlined waste at the Burnsville Sanitary Landfill?

The state’s modeling predicts the water table may also come into contact with the unlined waste at Burnsville Sanitary Landfill when the quarry ceases pumping operations.

According to the MPCA, the waste proposed to be added in the expansion would be placed in lined, modern-day waste cells. However, some of those cells are proposed to be placed on top of the existing unlined portions of the landfill.

The environmental review determined the water table already periodically reaches the unlined portions of the landfill during flooding on the Minnesota River, but “no significant changes” in groundwater quality have been noted during flooding.

The environmental review also states the proposed expansion doesn’t increase risks to groundwater quality, partially because the expansion itself wouldn’t change the depth or span of unlined portions, or impact the flow of groundwater.

But the report does acknowledge indirect risks of piling new waste on top of the unlined waste.

If the groundwater contamination related to the unlined waste occurred, the expansion may “impede corrective action,” the review states.

“The unlined waste is a major concern for the city of Bloomington,” said Glen Markegard, the city’s planning manager.

In an interview Tuesday, Markegard called it “short-sighted” to expand a landfill within the Minnesota River Valley.

“It’s a permanent facility,” he emphasized. “It’ll be there until the next glacial age.”

Since 2019, Bloomington officials have pushed back on the expansion plans, while Burnsville officials have supported the project, which ties into the city’s vision for redevelopment of the Freeway sites along the riverfront.

This summer, Bloomington officials asked the MPCA to order the clean-up of unlined waste at Burnsville Sanitary Landfill, in addition to cleaning up the Freeway sites.

Matt Croaston, a communications strategist with the MPCA, said the agency does have the authority to order corrective actions, including clean-ups.

“During the permitting process, the unique site characteristics and additional data needs will be evaluated and used to determine if and what clean up or corrective actions may be needed,” Croaston wrote in an email to Southwest News Media. “So, removing the waste from the unlined cells could be an option, if there is potential risk to warrant it.”

The FSEIS public comment period closes Dec. 24. Once the MPCA signs-off on the environmental review, the path will be clear for Waste Management to seek necessary permits.

Permitting authorities for the landfill expansion include the MPCA, the city of Burnsville, Dakota County, the U.S. Army Corps of Engineers and the Lower Minnesota River Watershed District.

Yet, the majority of the household waste sent to the landfill doesn’t need to be there, according to an analysis of the waste stream.

The environmental review found nearly half of landfilled material is organics, such as food waste. Another 20% is recyclable materials.

Like many of the metro area’s waste management facilities, the Burnsville Sanitary Landfill will reach capacity in the next couple of years without an expansion.

However, the waste landfilled in Burnsville could be diverted to other facilities, such as the Central Disposal Landfill in Winnebago, Iowa and the Pine Bend Landfill in Inver Grove Heights.