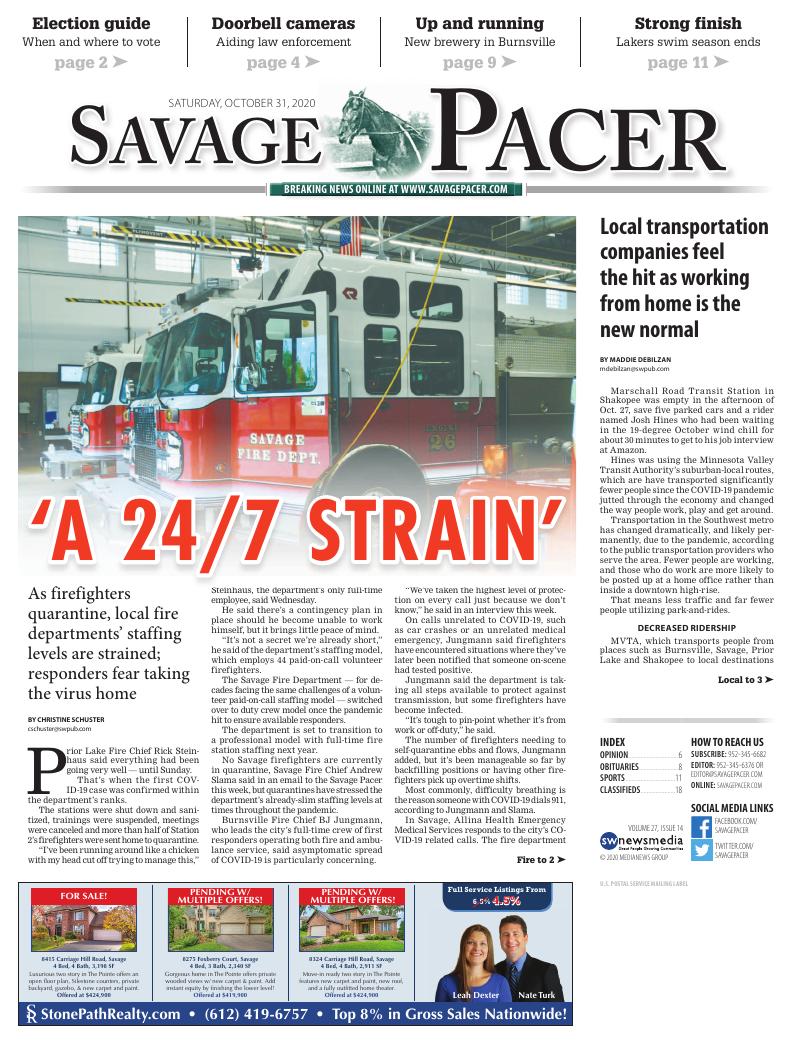 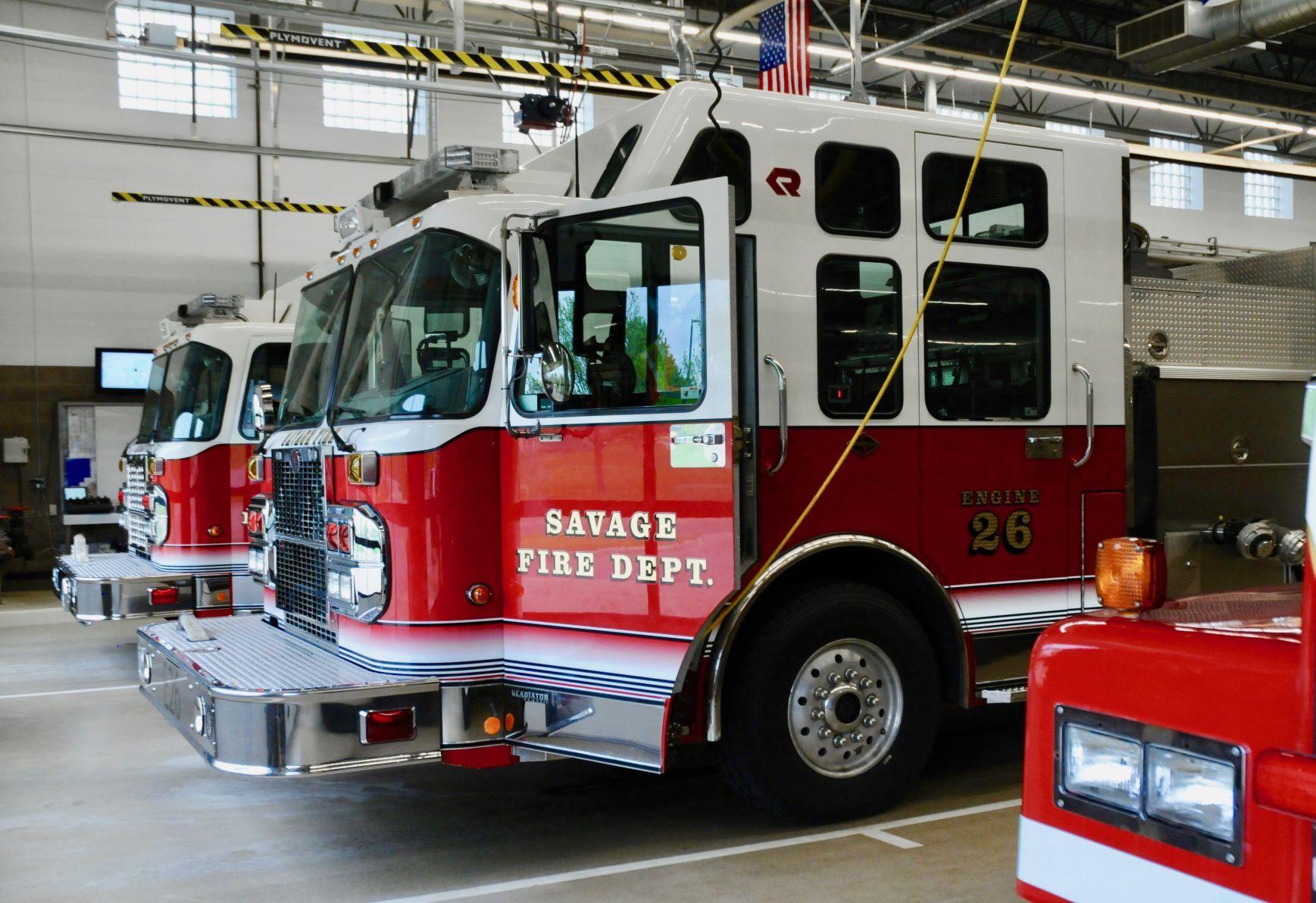 Josh Hines boards a bus that will take him from the Marschall Road Transit Station to his job interview at the Amazon Fulfillment Center in Shakopee Oct. 27. He was the only person at the station.

Marschall Road Transit Station in Shakopee was empty in the afternoon of Oct. 27, save five parked cars and a rider named Josh Hines who had been waiting in the 19-degree October wind chill for about 30 minutes to get to his job interview at Amazon.

Hines was using the Minnesota Valley Transit Authority’s suburban-local routes, which are have transported significantly fewer people since the COVID-19 pandemic jutted through the economy and changed the way people work, play and get around.

Transportation in the Southwest metro has changed dramatically, and likely permanently, due to the pandemic, according to the public transportation providers who serve the area. Fewer people are working, and those who do work are more likely to be posted up at a home office rather than inside a downtown high-rise.

MVTA, which transports people from places such as Burnsville, Savage, Prior Lake and Shakopee to local destinations and downtown, has seen a 60% decrease in ridership from 2019.

Most of that is due to Express rides falling off. MVTA is running about 59% of the routes it was pre-COVID.

MVTA’s Express rides, which transport people from the metro to the city, mostly for work purposes, have taken a complete nosedive, according to an Oct. 20 Shakopee City Council presentation by Luther Wynder, MVTA Chief Executive Officer. Express ridership with MVTA is down about 95%, Wynder said.

Though the ridership numbers tanked in March with the start of the pandemic, the ridership trend line has continued to slant slightly upwards from that month.

It’s not all “doom and gloom,” Wynder said. Although local service routes are limited, MVTA recently started offering local service routes on the weekends for residents who are reliant on public transportation. That means residents without cars can get to the grocery store, a weekend work shift or church without calling a friend for a lift. And it’s good news for local businesses, too.

“The guy at GameStop said it was the best thing to happen for his business since the PS4 was released,” Wynder said.

The local weekend service in Shakopee has so far served about 50% of the number of riders who use it during the week, which Wynder said is encouraging, because it means there are people who need weekend local service who are now getting it.

Home offices have become the norm for employees who are able to work from home — a model that has taken shape largely due to a statewide order which states Minnesota employees “must telework if you can” regardless of the employer.

Minnesota state workers were informed last week that they’ll most likely continue telecommuting “through at least June 2021,” according to memos sent to workers last week.

The decision affects about half of the roughly 56,000 state workers who currently work from home and has no bearing on non-state employees, though many other large employers in the state, such as Target, have already released similar announcements.

The logic of working from home until June is simple: that’s when the school year ends, according to Chris Kelly, spokesman for Minnesota Management and Budget, the agency that oversees the state’s human resources apparatus.

The goal is to stem the spread of the virus, which has been blamed for contributing to more than 2,300 deaths in Minnesota since March.

John Hagenmiller, the Marketing and Public Outreach Manager at SouthWest Transit, said Wells Fargo and U.S. Bank, whose employees make up a large portion of SouthWest Transit’s Park and Ride tickets, are “all over the board” when it comes to who comes into work and who doesn’t, but for the most part, the people who used to take advantage of the Park and Ride no longer do.

“The majority of the people who used our service pre-COVID are not transit dependent,” Hagenmiller said. “Most were going to jobs downtown. They’ve got a Buick and a Chevy sitting in the driveway at home; they’re riding by choice.”

“Nobody is going to those jobs downtown,” Hagenmiller said. “I don’t think that landscape will ever be the same as it was pre-COVID.”

Hagenmiller said on top of taking the hit from Express ridership dropoffs, the transportation company didn’t do special events this year such as the Minnesota State Fair or professional sports game buses.

“Those special event buses all attributed to ridership and money at the fare box,” Hagenmiller said.

MVTA is experiencing a similar toll from the cancellation of special events. August, which is the month MVTA has the highest ridership by far due to state fair park-and-rides, was a wash this year.

Fewer routes means fewer buses. SouthWest has shuttered 10 buses that were garaged for the state fair. It’s still hovering around 75 buses, but now, many of those buses are parked, Hagenmiller said. Staff is down about 50%, though many of those people were able to transfer to partner agencies or take positions in facilities to clean and sanitize the buses.

As for what will happen next year, Hagenmiller said transportation companies can only throw darts. If social distancing is still required, it will be a huge challenge to continue to provide special event services.

“With special events, we need to have those buses full,” Hagenmiller said. “And I don’t know when we’ll see that again.”

For now, Hagenmiller said all SouthWest Transit can do is continue to provide community support where it can. Local express routes are still operating, and it began partnering with two local food shelves to deliver groceries for residents who can’t get to the food shelf.

“We don’t know what’s going to happen just yet,” Hagenmiller said, adding, “we are trying to get involved with our communities.”

Additional reporting by Dave Orrick from the Pioneer Press. 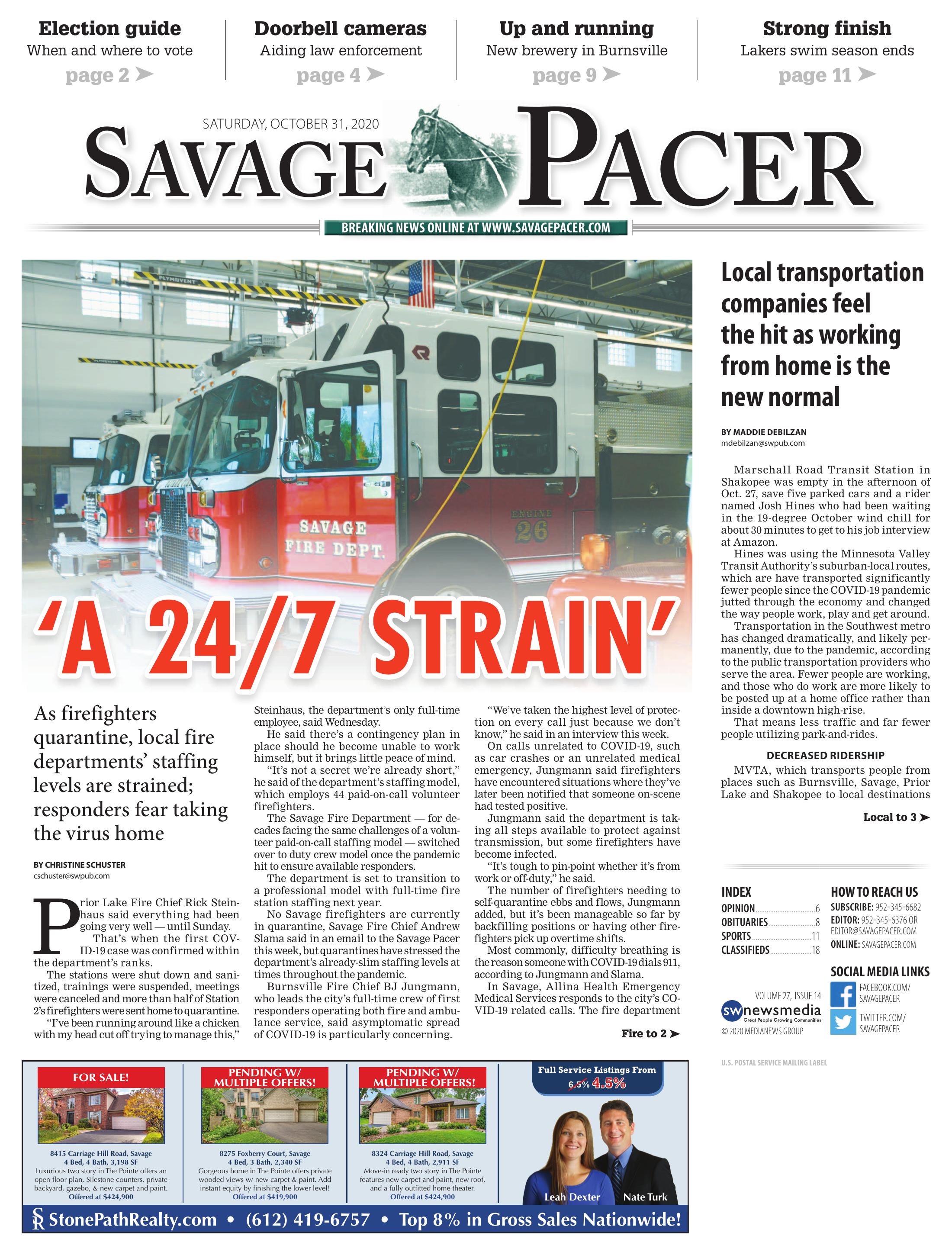