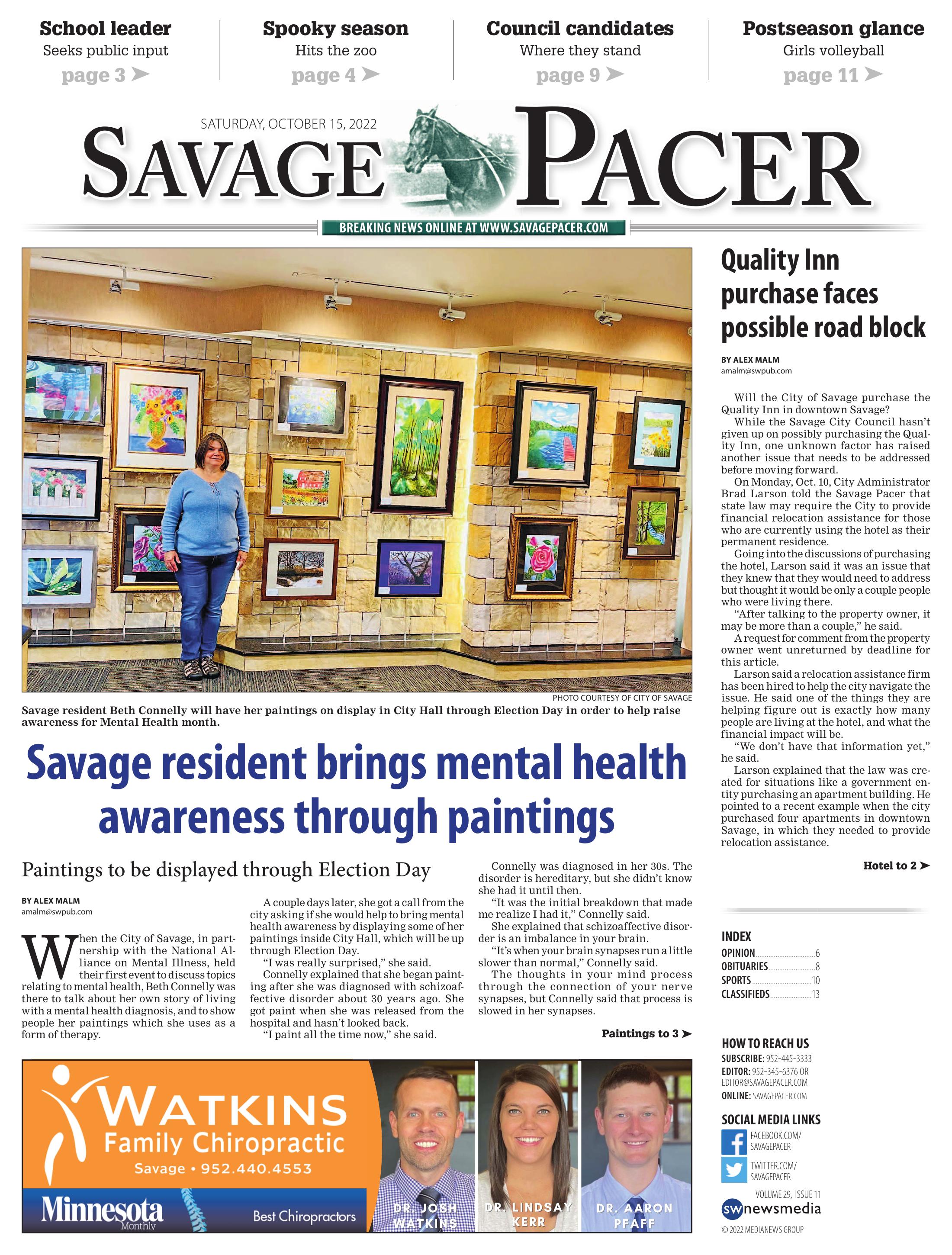 Savage resident Beth Connelly will have her paintings on display in City Hall through Election Day in order to help raise awareness for Mental Health month.

When the City of Savage, in partnership with the National Alliance on Mental Illness, held their first event to discuss topics relating to mental health, Beth Connelly was there to talk about her own story of living with a mental health diagnosis, and to show people her paintings which she uses as a form of therapy.

A couple days later, she got a call from the city asking if she would help to bring mental health awareness by displaying some of her paintings inside City Hall, which will be up through Election Day.

“I was really surprised,” she said.

Connelly explained that she began painting after she was diagnosed with schizoaffective disorder about 30 years ago. She got paint when she was released from the hospital and hasn’t looked back.

“I paint all the time now,” she said.

Connelly was diagnosed in her 30s. The disorder is hereditary, but she didn’t know she had it until then.

“It was the initial breakdown that made me realize I had it,” Connelly said.

She explained that schizoaffective disorder is an imbalance in your brain.

“It’s when your brain synapses run a little slower than normal,” Connelly said.

The thoughts in your mind process through the connection of your nerve synapses, but Connelly said that process is slowed in her synapses.

Connelly said she takes an antipsychotic medication to quicken the brain synapses.

“Undiagnosed, (schizoaffective disorder) can destroy your life and your heart and your loved ones,” said Connelly.

She said she is thankful she had the support she needed and was able to get her life back together.

With her mental health condition, it comes with highs and lows. Her paintings display that.

“I use my emotions in it,” Connelly said.

She said before displaying her art in City Hall, she never really displayed her work.

“It’s real personal to me because I put all my feelings into my art,” Connelly said.

Now, she says she knows that it can help others by bringing awareness to mental health by putting the paintings on display.

“It was time for me to reach out,” Connelly said.

One example of something she painted is a “darker piece” of a moon-lit forest with snow on the ground. Connelly said she painted it when she was feeling low and depressed.

Another painting is of a tree with lots of shades and shadows. She said that it is a painting of a photograph from Bear Lake that reminds her of her father.

In addition to painting and the love and support of her family, Connelly said exercising and getting outside are important therapeutic activities.

“I think you need to do things to keep your mental health stable,” she said.

Connelly also enjoys journaling. She said that she writes down her thoughts, and when she has a “low” or feels one coming on, she is able to read those positive thoughts, which uplifts her.

She also has her rescue dog that she got two years ago after retiring, which has become her therapy dog.

Connelly said she has spoken at a NAMI meeting that was geared towards caregivers. She said that she knows very well the importance for them to get encouragement.

“I was able to turn my life around with a lot of love and support,” Connelly said.

While she doesn’t like to sell her art for a profit, Connelly said that she has given away the vast majority of the approximately 500 paintings she has painted over the years. It includes donating paintings to various silent auctions for good causes.

Connelly says she plans on attending the city’s other events that are happening once a month for five months.

“Undiagnosed it can destroy your life and your heart and your loved ones."

Will the City of Savage purchase the Quality Inn in downtown Savage?

While the Savage City Council hasn’t given up on possibly purchasing the Quality Inn, one unknown factor has raised another issue that needs to be addressed before moving forward.

On Monday, Oct. 10, City Administrator Brad Larson told the Savage Pacer that state law may require the City to provide financial relocation assistance for those who are currently using the hotel as their permanent residence.

Going into the discussions of purchasing the hotel, Larson said it was an issue that they knew that they would need to address but thought it would be only a couple people who were living there.

“After talking to the property owner, it may be more than a couple,” he said.

A request for comment from the property owner went unreturned by deadline for this article.

Larson said a relocation assistance firm has been hired to help the city navigate the issue. He said one of the things they are helping figure out is exactly how many people are living at the hotel, and what the financial impact will be.

“We don’t have that information yet,” he said.

Larson explained that the law was created for situations like a government entity purchasing an apartment building. He pointed to a recent example when the city purchased four apartments in downtown Savage, in which they needed to provide relocation assistance.

“This one is way more trickier because it’s a hotel,” Larson said.

Asked if the city would be able to circumvent the process because the hotel isn’t zoned for permanent residence and there are no leases, Larson said based on discussion he has had with the city lawyer, there isn’t much precedent for it.

Larson said one complicating factor is that under the law, the city must provide comparable living situations for where they are now.

“How do you put someone in a comparable apartment when they were really treating a hotel room as an apartment?” Larson said. “We’re going to have to figure it out as we go.”

Larson said that those being relocated have a couple different options. They can take the cash amount they are entitled to and find their own place to live, or the relocation assistance specialist can help them find a place to live.

“There’s a deadline they need to make a decision by,” Larson said.

In the situation with the city’s most recent apartment purchase, he said three people took the cash and a fourth received help from the relocation specialists.

Larson pointed out the situation with the Quality Inn highlights the issue of housing and the lack of housing that meets people’s needs. He said he doesn’t think people are living at the hotel by choice.

“I don’t think it’s good really for a person to begin with,” Larson said. “We want people to be in quality homes whatever level that is for them.”

Larson said as far as buying the hotel goes, the plan is for the city to do it on their own. From there, they would begin the process of determining what the best use for the property would be.

He said city leaders may be able to work with different community partners, depending on what is built. Another option, Larson said, would be to find a developer that has plans for the property that they like and sell it to them directly.

The Savage City Council is expected to get an update during a closed session meeting on Monday. He said he doesn’t think it will be a cut and dry decision, as he is uncertain they will have all the facts they need at that time.

“If the Council wants to move forward, we will. If not, we won’t,” he said.