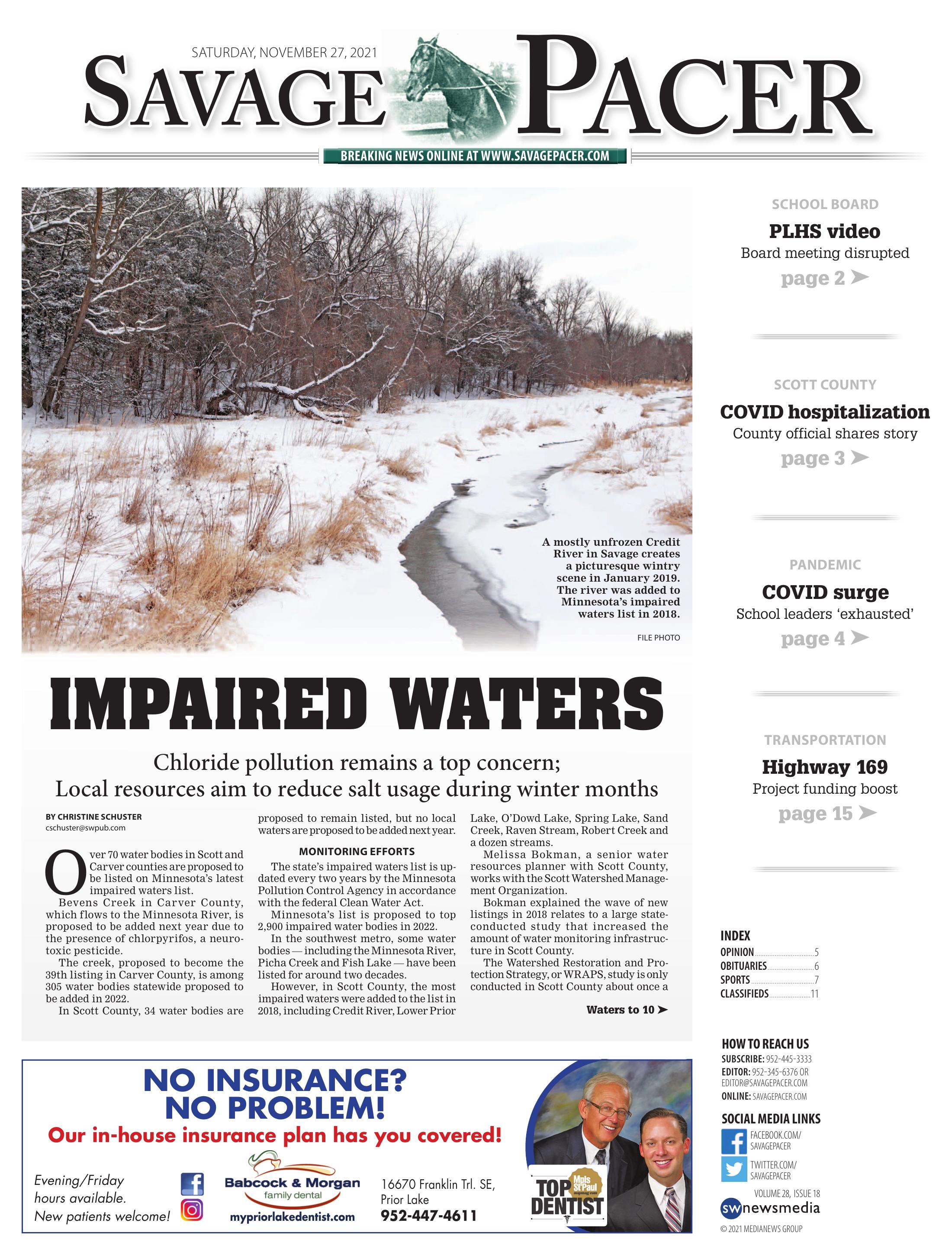 A mostly unfrozen Credit River in Savage creates a picturesque wintry scene in January 2019. The river was added to Minnesota’s impaired waters list in 2018.

Over 70 water bodies in Scott and Carver counties are proposed to be listed on Minnesota’s latest impaired waters list.

Bevens Creek in Carver County, which flows to the Minnesota River, is proposed to be added next year due to the presence of chlorpyrifos, a neurotoxic pesticide.

The creek, proposed to become the 39th listing in Carver County, is among 305 water bodies statewide proposed to be added in 2022.

The state’s impaired waters list is updated every two years by the Minnesota Pollution Control Agency in accordance with the federal Clean Water Act.

In the southwest metro, some water bodies — including the Minnesota River, Picha Creek and Fish Lake — have been listed for around two decades.

However, in Scott County, the most impaired waters were added to the list in 2018, including Credit River, Lower Prior Lake, O’Dowd Lake, Spring Lake, Sand Creek, Raven Stream, Robert Creek and a dozen streams.

Bokman explained the wave of new listings in 2018 relates to a large state-conducted study that increased the amount of water monitoring infrastructure in Scott County.

The Watershed Restoration and Protection Strategy, or WRAPS, study is only conducted in Scott County about once a decade, she said.

Cedar, McMahon and O’Dowd are among local lakes that are monitored through sample collection by local residents who live near the shoreline.

For impaired waters in Minnesota, there’s a wide variety of pollutants or stressors found in the water.

Sediment, for example, harms aquatic organisms by creating cloudiness in the water and preventing sunlight from reaching aquatic plants.

Mercury, which is found in fish throughout Scott County, is an atmospheric pollution that originates from smoke stacks and other industrial sources.

Polychlorinated biphenyls, or PCBS, are a class of toxic chemicals — once widely used in products — that’ve been found in fish in the Minnesota River.

Excess sediment and nutrients are common impairments, but Bokman said listings for bacteria and chloride are becoming increasingly common.

Shelby Roberts, an education and outreach specialist with the Scott Soil and Water Conservation District, said one teaspoon of salt is enough to permanently pollute five gallons of freshwater in any water system, including a lake, river or stream.

Salt is heavy and sticky, Roberts explained, so it can stick to sediment in fresh water, causing disruptions to dissolved oxygen levels when it sinks to the bottom of the water body.

The webinar will be held Wednesday, Dec. 15 from 6-6:45 p.m. and registration is available online at scottswcd.org/news-and-events.

For more information on impaired waters, the MPCA will host a series of public meetings in December. More information can be found online at www.pca.state.mn.us/water/minnesotas-impaired-waters-list.