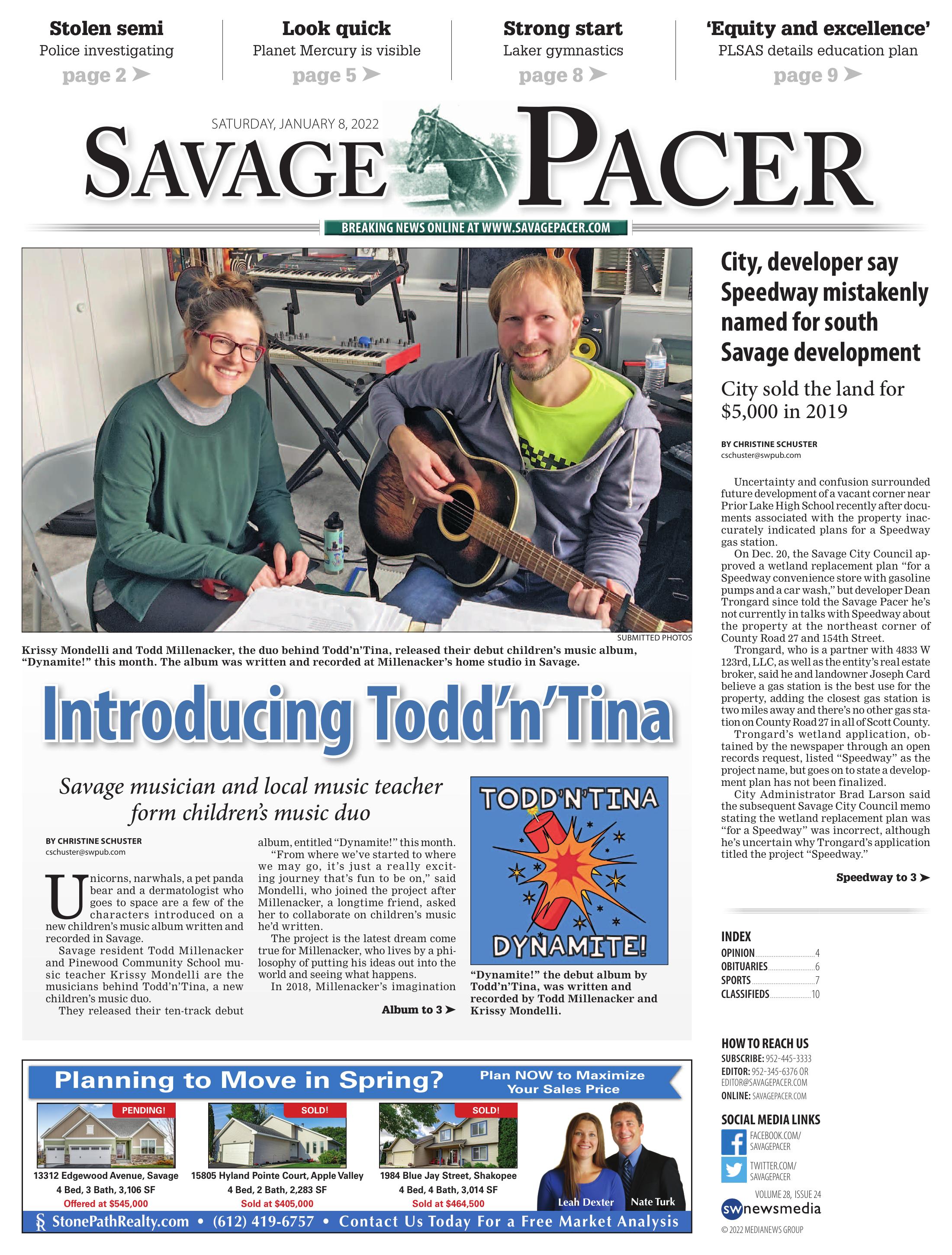 Unicorns, narwhals, a pet panda bear and a dermatologist who goes to space are a few of the characters introduced on a new children’s music album written and recorded in Savage.

They released their ten-track debut album, entitled “Dynamite!” this month.

“From where we’ve started to where we may go, it’s just a really exciting journey that’s fun to be on,” said Mondelli, who joined the project after Millenacker, a longtime friend, asked her to collaborate on children’s music he’d written.

The project is the latest dream come true for Millenacker, who lives by a philosophy of putting his ideas out into the world and seeing what happens.

In 2018, Millenacker’s imagination led him to hike 96 laps up the tallest peak of the Hyland Hills Ski Area in Bloomington to mirror hiking Mount Everest.

One year later, he swam nine miles at an indoor pool in Eden Prairie to replicate swimming the English Channel.

In the music world, Millenacker’s been resurrecting a lost art in advertising by selling quirky commercial jingles to companies including Little Caesars.

“The children’s music is not that much different than jingles in the sense that you just kind of make a fantastical world and universe and just kind of throw it out there,” Millenacker said in a recent interview.

And, whatever success awaits, both Millenacker and Mondelli said the fun of making music together is what drives their work forward.

And sometimes, both agree, you can’t take yourself too seriously.

Even the band’s name, Todd’n’Tina, pokes fun at being “slightly out-of-touch, middle-aged” children’s musicians, the duo joked. “Tina” is another nickname for Krissy’s full name, Kristina.

The album name, “Dynamite!” is drawn from the “TNT” in the band’s initials.

Jokes aside, both Millenacker and Mondelli have diverse professional music backgrounds.

Mondelli holds a master’s degree in music education and has taught music at various grade levels for over 20 years. She began playing piano at the age of five.

Millenacker, who began guitar lessons in fifth grade, has played in bands since he was a teenager and recorded around a dozen albums.

On the first day of the school year, Mondelli played one of Todd’n’Tina’s songs, entitled “Silly String,” for her students during a classroom activity.

To her surprise, students began singing the hook right along with the recording — she hadn’t told them it was her own music.

“This is amazing,” she remembers thinking. “Kids are really going to like this.”

Since then, Todd’n’Tina have released three music videos, shot by Millenacker’s jingle collaborator, Kris Verplank, and edited by Mondelli.

The duo plans to play live shows this spring, where they hope to continue winning over both honest and tough critics — young children.

“I figure we’ll get about two more records, then we’ll have the bitter break-up as a band and then the behind-the-music special,” Millenacker joked.

A reunion tour would also be in order.

Todd'n'Tina's music is available for download on iTunes and Spotify.

Music videos are available at toddntina.com.

Get it touch or request a free download of the "Dynamite!" CD at toddntinamusic@gmail.com

A convenience store with gasoline pumps and a car wash is envisioned for the development of a vacant corner near Prior Lake High School in Savage.

Uncertainty and confusion surrounded future development of a vacant corner near Prior Lake High School recently after documents associated with the property inaccurately indicated plans for a Speedway gas station.

On Dec. 20, the Savage City Council approved a wetland replacement plan “for a Speedway convenience store with gasoline pumps and a car wash,” but developer Dean Trongard since told the Savage Pacer he’s not currently in talks with Speedway about the property at the northeast corner of County Road 27 and 154th Street.

Trongard, who is a partner with 4833 W 123rd, LLC, as well as the entity’s real estate broker, said he and landowner Joseph Card believe a gas station is the best use for the property, adding the closest gas station is two miles away and there’s no other gas station on County Road 27 in all of Scott County.

Trongard’s wetland application, obtained by the newspaper through an open records request, listed “Speedway” as the project name, but goes on to state a development plan has not been finalized.

In an email to the Savage Pacer, Trongard said other possible uses for the site could include a dance studio, dog daycare or housing.

“We would like to move forward with site preparation work to make this site more attractive for possible end users,” he wrote, adding no exact user has been identified at this time.

Desire for a gas station

A convenience store with gasoline pumps and a car wash is envisioned for the development, according to the wetland replacement plan application.

At the time, city officials said it would be a great location for a convenience store and gas station.

The city had owned the land for over 15 years as a remnant parcel from previous road construction, but officials hadn’t seen much interest from developers, according to Larson.

“The location is great, the quality of the site is poor,” Larson said.

Challenges for development on-site include a significant hill, wetlands, a gas line, setback requirements associated with the nearby Credit River and the property’s triangular shape.

The purchase agreement between the city and landowner initially stated the land would be developed within one year, but the Savage City Council has since granted extensions.

Larson said the extensions gave the landowner more time to work with the private property owner to the east, but the parties never reached an agreement.

“Unfortunately, due to circumstances beyond our control, we have failed in our efforts to acquire additional property,” a representative of the landowner wrote to city officials in November.

Through their business entity, Trongard and Card are looking to purchase wetland credits from the City of Savage to move forward with development.

Minnesota’s wetland banking program, administered by the state Board of Water and Soil Resources, allows landowners and developers to purchase wetland “credits” to offset environmental impacts of development on wetlands.

In November, a representative of the landowners wrote a letter to city officials proposing a wetland credit transaction to mitigate the wetland impacts planned for the development.

State law puts forth wetland replacement requirements, but the property under review for the Speedway development doesn’t have adequate acreage to establish a new wetland, according to a proposal submitted to the city.

The development team is proposing to instead meet the mitigation requirements by purchasing 0.76 acres worth of wetland bank credits from the City of Savage’s wetland bank.

The city previously acquired around 10-acres worth of wetland credits when it built a larger-than-required wetland behind the homes on 125th Street and Ensign Avenue, according to City Administrator Brad Larson.

“We can use those wetland credits for city projects or as an economic development tool,” Larson said.

On Dec. 15, the Savage Economic Development Commission reviewed a proposal from the developer to purchase 0.76 acres worth of wetland credits for $1 per-square-foot, or roughly $33,105.

Market rate for the city’s wetland credits would be approximately $1.14 per-square-foot, bringing the purchase cost to $37,740, according to city documents.

The Economic Development Commission, which makes recommendations to the Savage City Council, supported moving forward with the wetland credit transaction, but voted in favor of a market rate price for the city’s wetland credits.

The existing wet meadow wetland proposed to be filled for development has been degraded and bisected by previous developments.

If city officials move forward with the wetland banking transaction, the money would go towards creating higher quality wetlands in the future, according to Larson.

The Savage City Council is set to discuss the request at the work session on Monday, Jan. 10. The city’s work sessions are open to the public, but not televised.

Editor’s note: This story originally published on Dec. 30 and cited a Dec. 20 Savage City Council document, which indicated plans for a Speedway gas station to be developed. The story has since been updated to reflect new information about the development plans for the property.