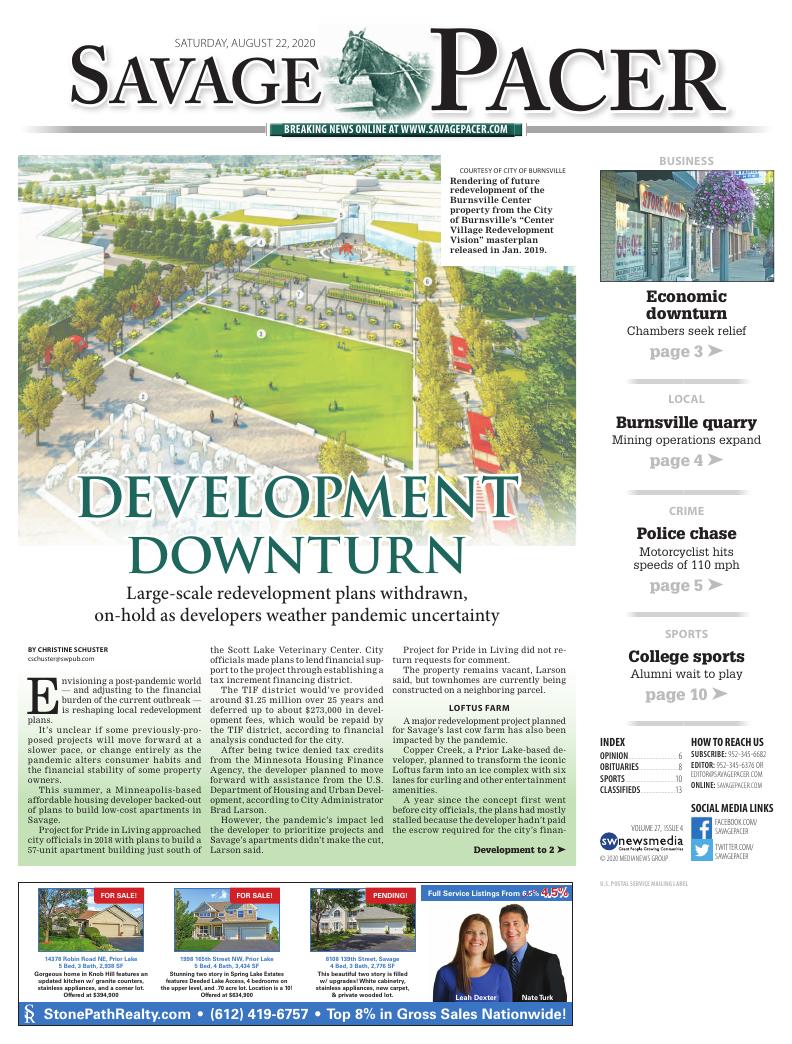 Rendering of future redevelopment of the Burnsville Center property from the City of Burnsville’s “Center Village Redevelopment Vision” masterplan released in Jan. 2019.

Top: An affordable housing development previously proposed for Savage. The developer is no longer moving forward with the plans. Bottom: The curling center proposed to be built on the Loftus Farm. The developer withdrew the application for this project in May and hasn’t yet resubmitted.

Envisioning a post-pandemic world — and adjusting to the financial burden of the current outbreak — is reshaping local redevelopment plans.

It’s unclear if some previously-proposed projects will move forward at a slower pace, or change entirely as the pandemic alters consumer habits and the financial stability of some property owners.

This summer, a Minneapolis-based affordable housing developer backed-out of plans to build low-cost apartments in Savage.

Project for Pride in Living approached city officials in 2018 with plans to build a 57-unit apartment building just south of the Scott Lake Veterinary Center. City officials made plans to lend financial support to the project through establishing a tax increment financing district.

The TIF district would’ve provided around $1.25 million over 25 years and deferred up to about $273,000 in development fees, which would be repaid by the TIF district, according to financial analysis conducted for the city.

After being twice denied tax credits from the Minnesota Housing Finance Agency, the developer planned to move forward with assistance from the U.S. Department of Housing and Urban Development, according to City Administrator Brad Larson.

However, the pandemic’s impact led the developer to prioritize projects and Savage’s apartments didn’t make the cut, Larson said.

Project for Pride in Living did not return requests for comment.

The property remains vacant, Larson said, but townhomes are currently being constructed on a neighboring parcel.

A major redevelopment project planned for Savage’s last cow farm has also been impacted by the pandemic.

Copper Creek, a Prior Lake-based developer, planned to transform the iconic Loftus farm into an ice complex with six lanes for curling and other entertainment amenities.

A year since the concept first went before city officials, the plans had mostly stalled because the developer hadn’t paid the escrow required for the city’s financial analysis to begin.

In late-May, the city received a request from the developer to withdraw the application.

“Our understanding is that they intend to resubmit,” Bryan Tucker, the city’s planning manager, said this week.

City staff met with the developer within the last month, he added, and were told the proposal would be moving forward without major changes to the concept.

However, city staff say they aren’t sure when the plans will return to the table.

In June, developer Greg Schweich told the Savage Pacer closures at city hall slowed the process but estimated the plan would return shortly.

Schweich could not be reached for additional comments before press time Thursday.

CBL owns the majority of the mall, and Macy’s, JC Penney and Seritage each own one anchor store space.

The company’s financial report filed with the Securities and Exchange Commission on Aug. 17 stated six of its loans, each secured by one of the company’s malls, were in default as of June 30.

Outstanding debt on Burnsville Center totals approximately $64.2 million, according to the report.

On Wednesday, CBL Properties announced it had entered into a restructuring support agreement to eliminate approximately $900 million in debt and $600 million of “other obligations”.

Bankruptcy filings are to be expected this fall.

“In order to implement this comprehensive restructuring, the RSA contemplates that the company will commence voluntary Chapter 11 protection in the U.S. Bankruptcy Court on October 1, 2020,” Stephen D. Lebovitz, Chief Executive Officer of CBL Properties, said in a statement.

Experts had predicted CBL would be the first publicly traded mall owner to file for bankruptcy during the pandemic, according to a report by CNBC. The company reported second quarter losses of $81.5 million compared with a net loss of $35.4 million in the second quarter of 2019. From April through July, CBL reported a rent collection rate of approximately 54%.

Stacey Keating, a spokesperson with CBL Properties, confirmed the restructuring support agreement does not impact the status of Burnsville Center.

“Customers can continue to expect business as usual at the property,” she wrote in an email.

In 2018, the City of Burnsville set out to define the longterm plans for the redevelopment of Burnsville Center and surrounding businesses on either side of County Road 42.

The “Center Village Redevelopment Vision”, a 165-page report released in Jan. 2019, details the city’s hopes to unite property owners around a redevelopment vision that centers around walkable, mixed-use spaces.

Consultants on the project said a domino-effect is likely once the first major change occurs.

“If they can redevelop Sears right, they can help a lot of other big box retailers that are going through similar struggles,” Damon Farber President Thomas Whitlock, a consultant for the city, said at a public meeting in Nov. 2018. “The challenge for them is they have 200 sites around the country — what’s going to make this site rise to the top for them and what does the partnership with the city look like.”

Dean said the mall’s foreclosure doesn’t have any immediate impact on their vision for the site, or what might come next.

She said the city is interested in facilitating redevelopment by partnering with a developer whose plans align with the city’s vision, but they’re open to new ideas, too.

“If somebody were to come to the city with a plan that looked a little different than what’s in the vision I don’t think that’s off the table,” Dean said. 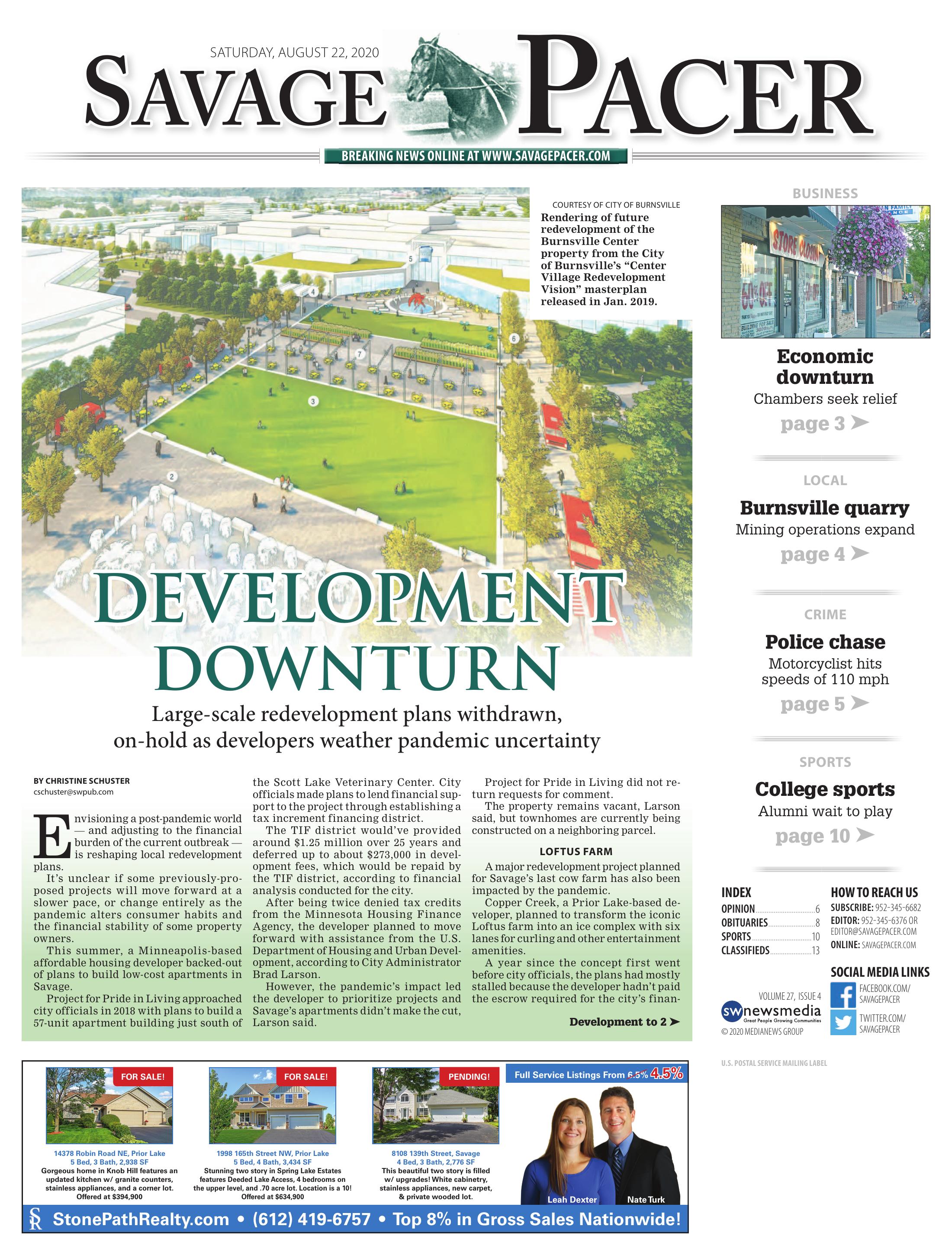