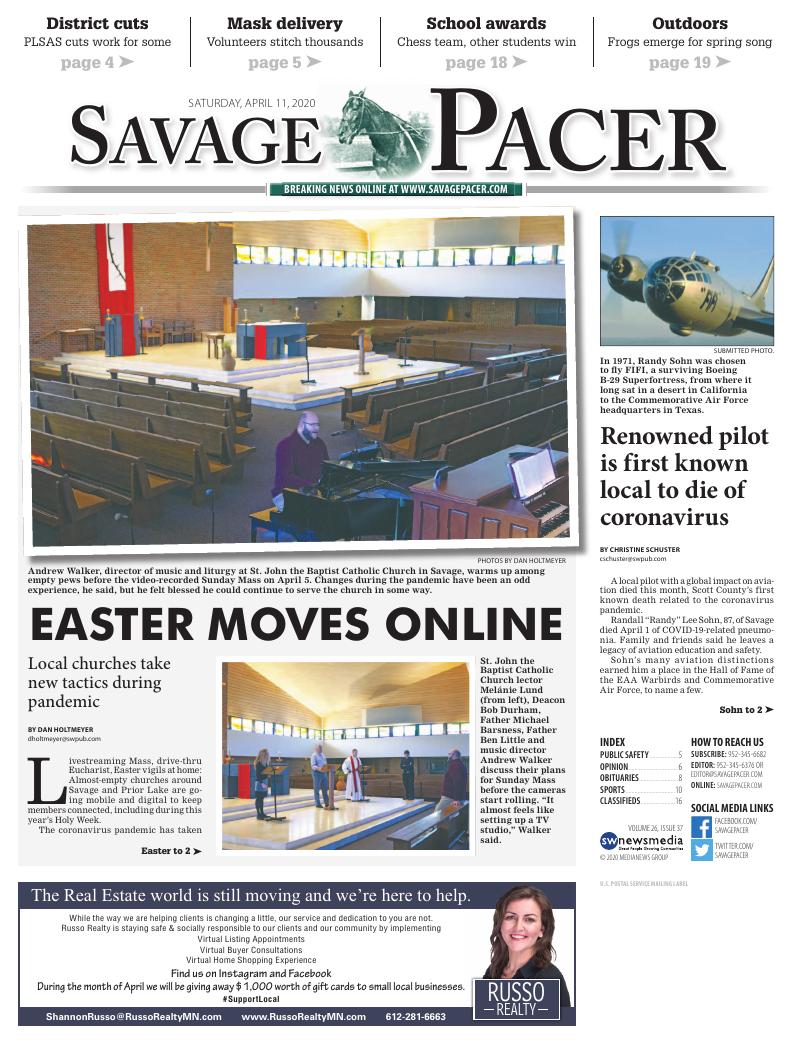 Andrew Walker, director of music and liturgy at St. John the Baptist Catholic Church in Savage, warms up among empty pews before the video-recorded Sunday Mass on April 5. Changes during the pandemic have been an odd experience, he said, but he felt blessed he could continue to serve the church in some way.

Priest Tom Walker, right, and others begin evening Mass on Saturday, April 4, in a nearly empty St. Michael Catholic Church in Prior Lake, which was recorded and broadcast for members at home. St. Michael and other area churches have gone online during the coronavirus pandemic, including for the Easter holiday.

Communion wafers and single servings of wine wait for St. Paul’s Lutheran Church members early Sunday, April 5, who drove up to the curb for the Eucharist.

Head elder Glen Dahn, center, and others at St Paul’s Lutheran Church held a Eucharist drive-thru on Sunday, which dozens of members participated in. “There’s lots of ways to do church,” Dahn said.

Livestreaming Mass, drive-thru Eucharist, Easter vigils at home: Almost-empty churches around Savage and Prior Lake are going mobile and digital to keep members connected, including during this year’s Holy Week.

The coronavirus pandemic has taken away the typical church experience, the physical community of sharing spaces among hundreds of families, several priests and churchgoers said. But in many cases it also brings spiritual meaning and enduring relationships.

“We’re having such a powerful shared experience; all of us are going through this together,” said Dan Poffenberger, lead pastor at Shepherd of the Lake Lutheran Church, recalling the core Christian teaching of loving neighbors.

“This is an opportunity for people of faith to live that out in a really important way.”

Crowds at houses of worship across the state have dwindled in recent weeks as Gov. Tim Walz and other officials closed down public gathering places and urged Minnesotans to avoid groups and stay home as much as possible.

Signs of the gradual change were still around last weekend, like a bottle of hand sanitizer at St. John the Baptist Church in Savage with no visitors to use it and the strips of tape closing off alternating pew rows at St. Michael Catholic Church in Prior Lake.

The weekly sermons and hymns have continued, broadcast through local TV channels, church websites and social media pages. Generally the typical weekend’s series of services has condensed to a single recording, though Good Friday and other days of Holy Week will in many cases get their own videos, too.

“It’s going as well as anyone could expect,” said Ben Little, one of St. John the Baptist’s priests, adding the approach has gotten an enthusiastic response from parishioners. But it’s a diminished event in some ways.

“There really is no replacement for what we do,” he said. “Our sacraments rely so much on an in-the-flesh experience.”

Some churchgoers nonetheless said they were happy church was still happening in any form.

“We need it now more than ever,” said Elece Shoquist, who was one of dozens of people who drove to St. Paul’s Lutheran Church curb for a communion wafer and single-serve cup of wine Sunday after the morning’s service broadcast. “I think it’s as good as it can be.”

The pandemic has prodded several churches to branch out in new ways, such as phone-calling trees to check in with every family each week with Shepherd of the Lake and Savage’s Glendale United Methodist Church.

Poffenberger said Shepherd of the Lake is sending out daily packages of recorded songs and tutorials for holding the Easter vigil during the night before Easter Sunday. Such services have become more personal and intimate, he said, filmed close-up and from his and other members’ homes.

“I’m hoping that opens up a new kind of relationship between me and the congregation,” Poffenberger said.

The coronavirus has also left its mark on the sermons themselves, given the pervasive uncertainty and anxiety about what’s happening, several pastors said. Easter, with its theme of Jesus’ resurrection after suffering, and other Bible passages offer lessons in such times, they added.

And those messages are still binding people together from their separate homes, Walker said, pointing for example to a recent funeral, when people from multiple locations joined the service and left comments that became a record for the future.

“There’s a lot of consolation knowing your fellow parishioners are tuning in at the same time,” said Melánie Lund, a lector at St. John the Baptist. “I do feel very connected and united.” 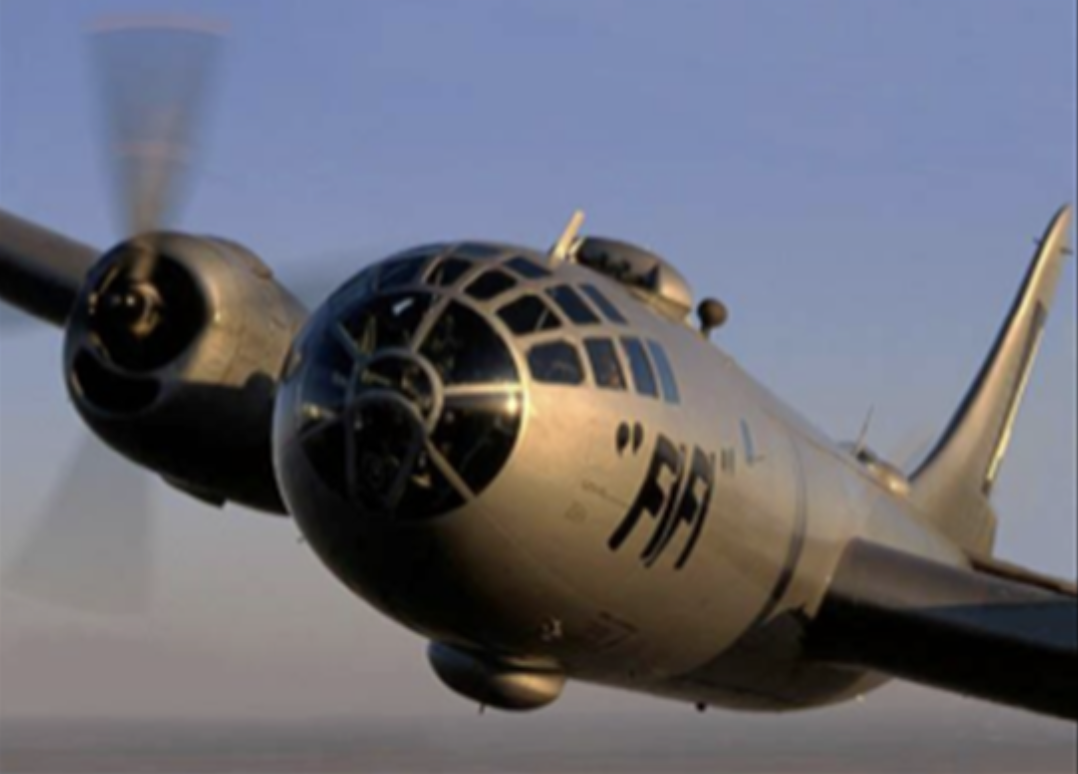 Submitted photo In 1971, Randy Sohn was chosen to fly FIFI, a surviving Boeing B-29 Superfortress, from where it long sat in a desert in California to the Commemorative Air Force headquarters in Texas.

In 1971, Randy Sohn was chosen to fly FIFI, a surviving Boeing B-29 Superfortress, from where it long sat in a desert in California to the Commemorative Air Force headquarters in Texas. 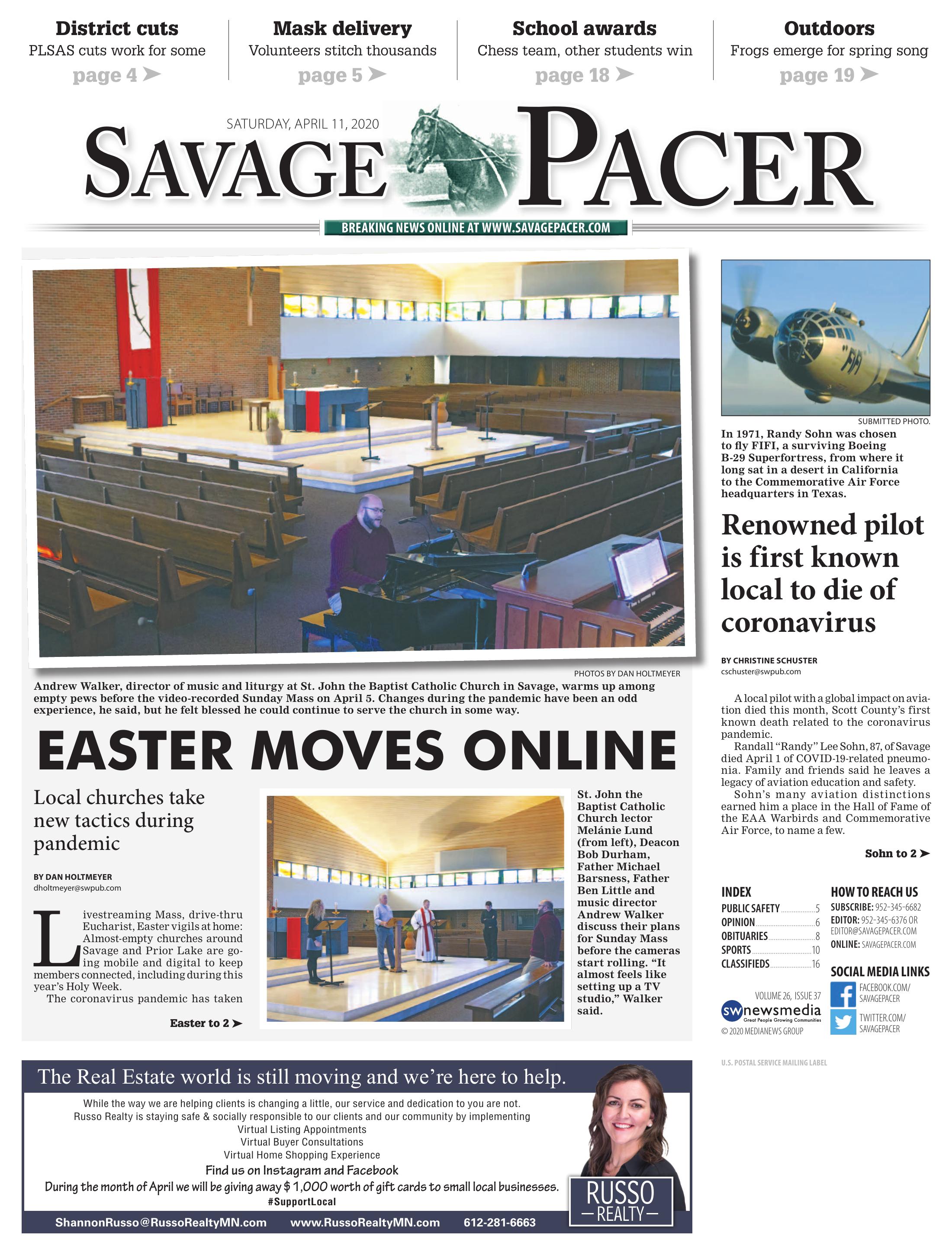