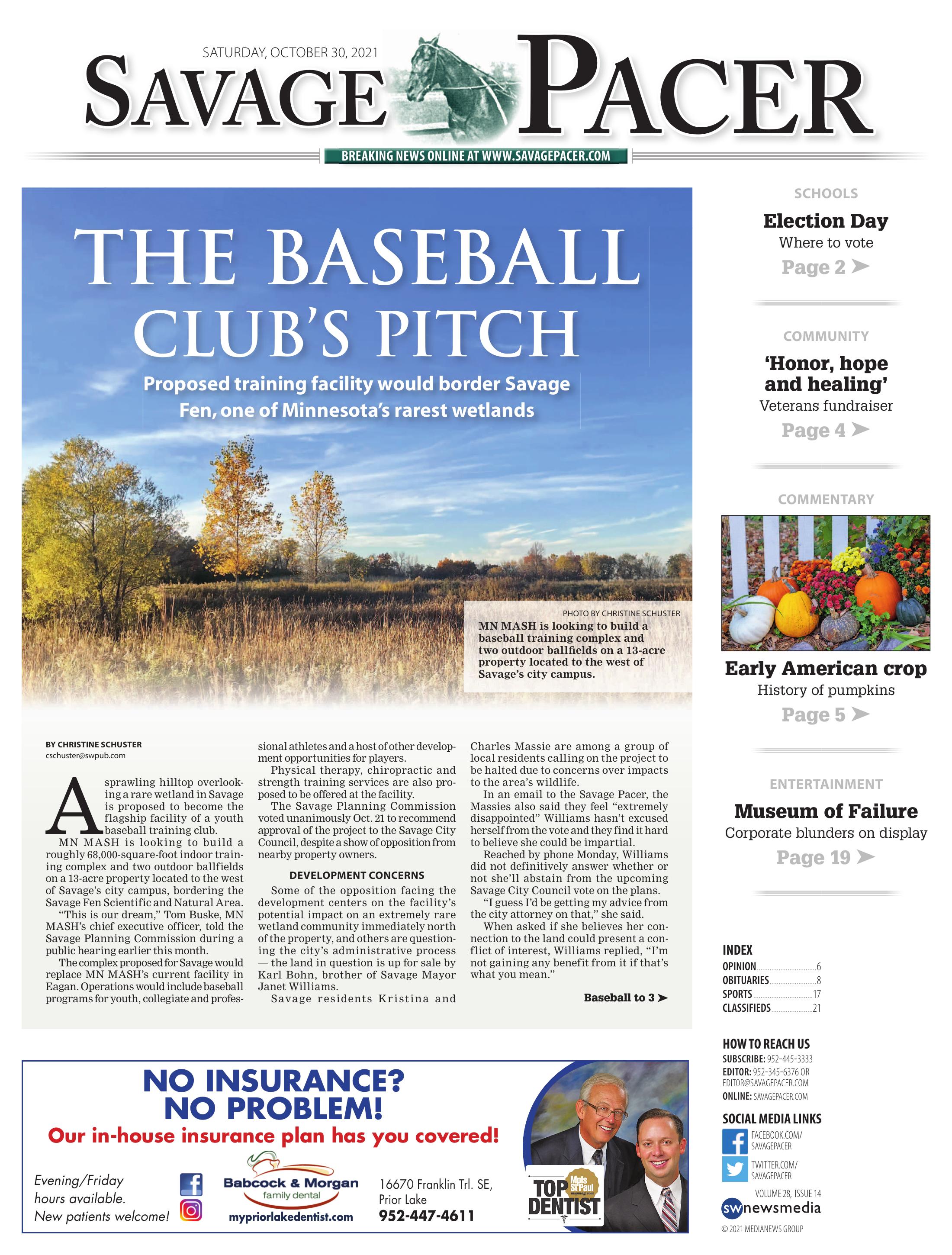 Courtesy of ISG/City of Savage

A sprawling hilltop overlooking a rare wetland in Savage is proposed to become the flagship facility of a youth baseball training club.

MN MASH is looking to build a roughly 68,000-square-foot indoor training complex and two outdoor ballfields on a 13-acre property located to the west of Savage’s city campus, bordering the Savage Fen Scientific and Natural Area.

“This is our dream,” Tom Buske, MN MASH’s chief executive officer, told the Savage Planning Commission during a public hearing earlier this month.

The complex proposed for Savage would replace MN MASH’s current facility in Eagan. Operations would include baseball programs for youth, collegiate and professional athletes and a host of other development opportunities for players.

The Savage Planning Commission voted unanimously Oct. 21 to recommend approval of the project to the Savage City Council, despite a show of opposition from nearby property owners.

Some of the opposition facing the development centers on the facility’s potential impact on an extremely rare wetland community immediately north of the property, and others are questioning the city’s administrative process — the land in question is up for sale by Karl Bohn, brother of Savage Mayor Janet Williams.

Savage residents Kristina and Charles Massie are among a group of local residents calling on the project to be halted due to concerns over impacts to the area’s wildlife.

In an email to the Savage Pacer, the Massies also said they feel “extremely disappointed” Williams hasn’t excused herself from the vote and they find it hard to believe she could be impartial.

Reached by phone Monday, Williams did not definitively answer whether or not she’ll abstain from the upcoming Savage City Council vote on the plans.

“I guess I’d be getting my advice from the city attorney on that,” she said.

When asked if she believes her connection to the land could present a conflict of interest, Williams replied, “I’m not gaining any benefit from it if that’s what you mean.”

Still, what some local residents are claiming may be a conflict of interest has been a point of contention as the project moves through the city’s planning process.

Last Thursday, the Savage Planning Commission swiftly reprimanded a resident who mentioned the relationship between Williams and Bohn during a public hearing.

Commissioner Drew Christensen, a former state representative, asserted local resident Mike Clairmont had violated the meeting’s code of conduct when Clairmont asked whether or not the commission would consider the relationship between Williams and Bohn in their discussions and recommendations surrounding the project.

“Nope, you don’t get to say,” Chair Stacey Crakes interrupted, stating Clairmont’s comment had nothing to do with the public hearing. The commission voted unanimously to move the project forward.

In an interview Tuesday, Crakes said the commission is tasked with determining whether or not the project meets the guidelines from a land-use perspective.

“Invoking personalities as part of the discussion is not a part of what we are to be evaluating,” Crakes said, adding Williams has “no financial gain whatsoever from this project.”

The Savage City Council is scheduled to vote on the plans during their regular meeting on Monday, Nov. 1.

Last year, the League of Minnesota Cities published a lengthy memo on navigating ethical dilemmas in public office, including conflict of interest dynamics.

In one opinion letter from the 1970s, the Attorney General advised a council member was not disqualified from voting on a rezoning because his father owned the legal title to the land in question.

In 2009, Bohn sold a significant portion of his property to conservation efforts, which added nearly 70 acres to the Savage Fen Scientific and Natural Area.

With the Bohn family’s former farm property located approximately one mile to east, Williams said there might be a misconception that the property her brother owns once belonged to the family farm. It never did, she said, but rather, Bohn purchased the land himself.

Over the decades, city staff have reviewed numerous development proposals for the scenic landscape.

Other concepts reviewed for the land recently centered on high-density housing. However, according to Savage City Administrator Brad Larson, none of the proposals for development have reached the formal review process until now.

“This project borders the Savage Fen Scientific and Natural Area, an extremely rare and sensitive natural resource that is home to many state-listed species,” Melissa Collins, a regional environmental assessment ecologist with the Minnesota Department of Natural Resources, wrote to city staff.

The rarest find within the neighboring wetland complex is one of Minnesota’s largest remaining calcareous fen communities. The fen is home to one of the rarest native plant communities in the state, according to the DNR.

In emails obtained by the Savage Pacer, Collins outlined over a dozen potential impacts the development might inflict on the ecologically-sensitive area.

Colonial waterbirds, Blanding’s turtles and the federally-endangered rusty-patched bumblebee are among a host of rare species that have either been documented on site or have a high probability of using the area’s habitat.

The use of netting to capture foul balls and the ballpark’s lighting both pose a risk to bird and bat species, according to Collins. Additionally, the facility’s lighting may disrupt a wide variety of wildlife, including insects and turtles.

“Due to the short notice we received about this project, we are still coming to understand specific project details and respond with a thorough review of potential impacts to protected species,” Collins wrote in an email to city staff on Monday.

Around 90% of the club’s clientele is youth and over 1,000 families are served by the company’s 30 teams and programming.

If the development is approved, a two-part construction schedule would begin this fall. The outdoor ballfields, all made of artificial turf, would be completed in 2023 at the earliest. 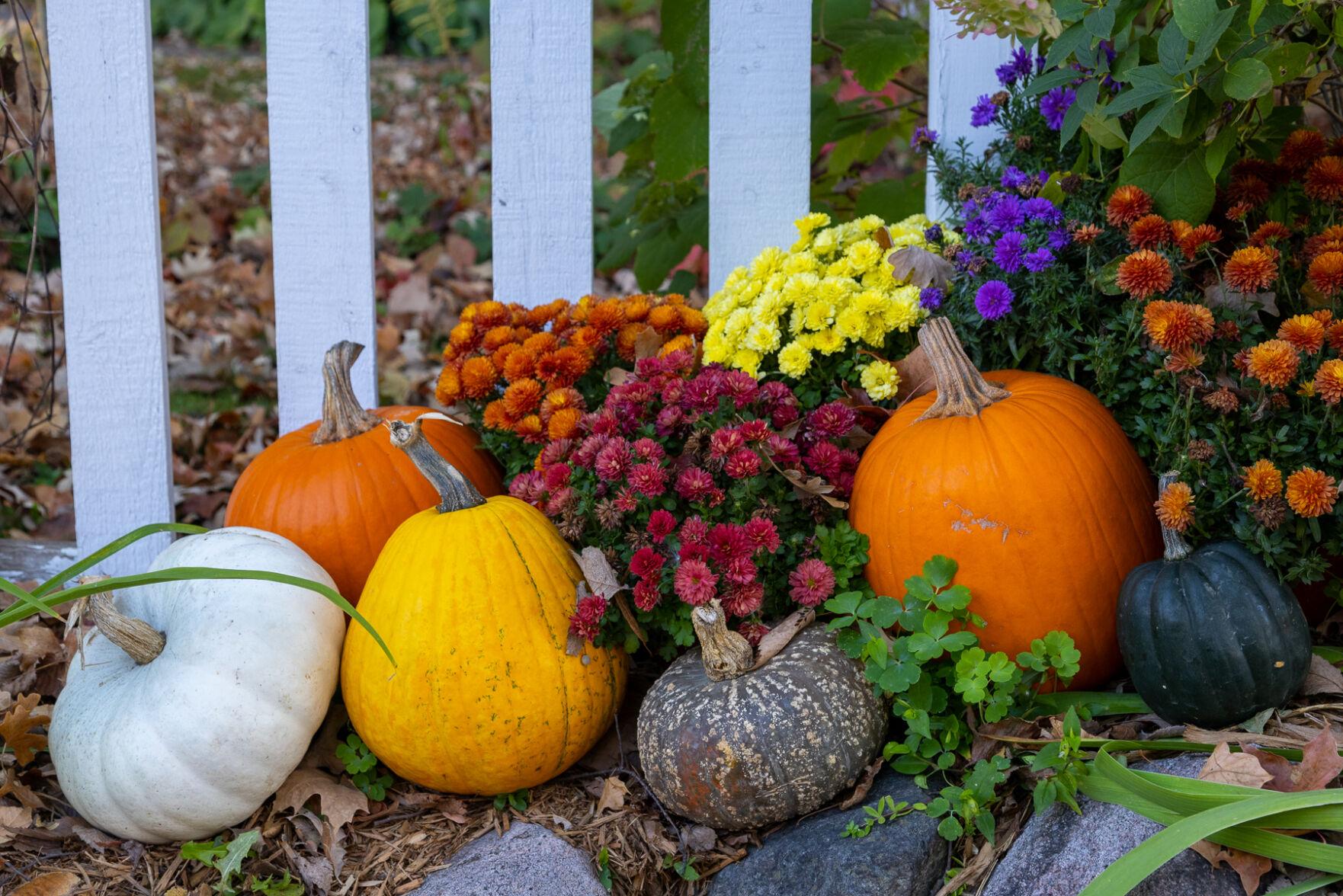 Native peoples in Mexico started growing pumpkins for food over 11,000 years ago.