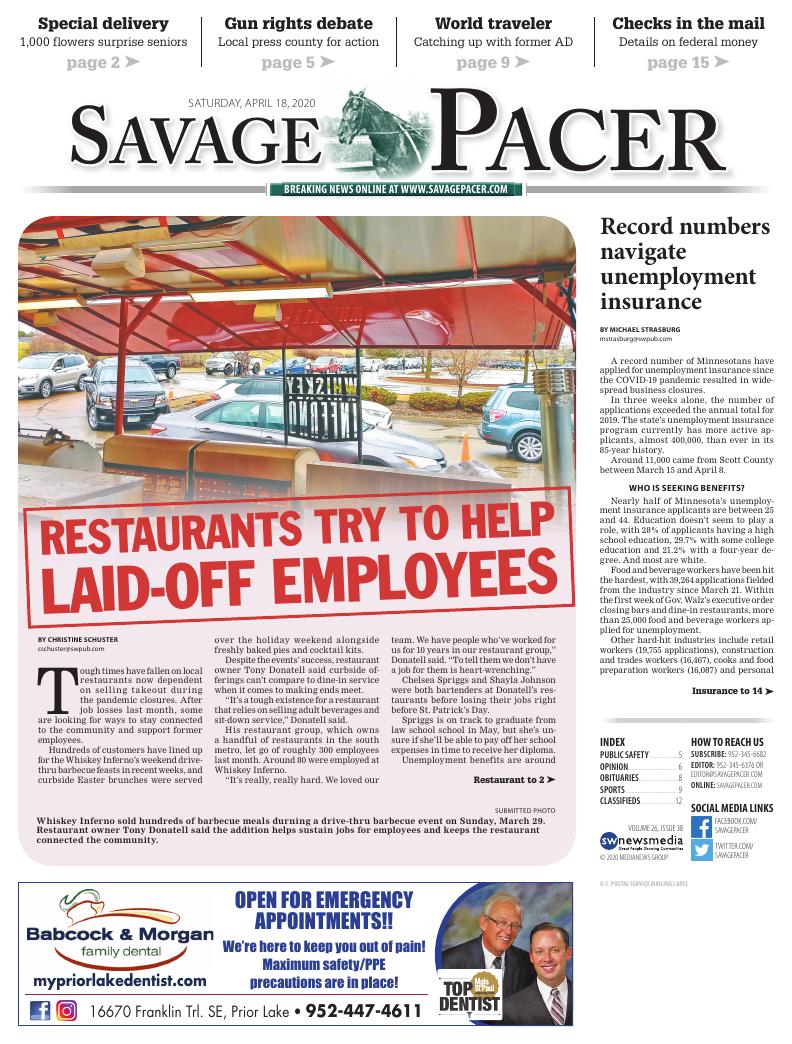 Tough times have fallen on local restaurants now dependent on selling takeout during the pandemic closures. After job losses last month, some are looking for ways to stay connected to the community and support former employees.

Hundreds of customers have lined up for the Whiskey Inferno’s weekend drive-thru barbecue feasts in recent weeks, and curbside Easter brunches were served over the holiday weekend alongside freshly baked pies and cocktail kits.

“It’s a tough existence for a restaurant that relies on selling adult beverages and sit-down service,” Donatell said.

His restaurant group, which owns a handful of restaurants in the south metro, let go of roughly 300 employees last month. Around 80 were employed at Whiskey Inferno.

“It’s really, really hard. We loved our team. We have people who’ve worked for us for 10 years in our restaurant group,” Donatell said. “To tell them we don’t have a job for them is heart-wrenching.”

Chelsea Spriggs and Shayla Johnson were both bartenders at Donatell’s restaurants before losing their jobs right before St. Patrick’s Day.

Spriggs is on track to graduate from law school school in May, but she’s unsure if she’ll be able to pay off her school expenses in time to receive her diploma.

Unemployment benefits are around $200 a week, she said. “That’s a slow shift bartending.”

To help former employees and their families get by during difficult times, Donatell opened a food shelf for laid-off employees at one of his restaurants in Eagan.

Johnson, a single mom, has stopped by the food shelf for essential items. Her mom and stepdad, who help her with child care, are also out of work.

“It’s really helpful just to keep money in our pockets,” she said. “Even just going in and getting mac and cheese and bananas and fresh fruit.”

Food shelf donations are collected during the weekend drive-thru specials. The items go to employees in need and other local donation sites.

The weekend event also allows for a regular-sized staff, Donatell said, even if it’s only for a day or two. Other former employees, including Spriggs and Johnson, come back to volunteer to take their mind off things and support the company.

“It’s just nice to be serving people, that’s what we do,” Donatell said.

Donatell said buying gift cards is one of the best ways to support the business. Gift cards purchased during the closure will serve as loyalty cards once the restaurant reopens. Cardholders will be given 10% off on their orders for a year.

When the restaurant will reopen is unclear, but Spriggs and Johnson both said they plan on returning to their bartending jobs. In the meantime, they miss the connection bartenders form with regular customers.

“I have no idea how their lives are going or even if they’re OK,” Spriggs said, but she believes a big reunion awaits at the end of the closures.

The restaurant filled the night before the closures took effect with customers paying out extra tips to employees.

“I feel like every patron we’ve ever had came in that night just to say goodbye to us,” she said. “I cried so many times. It was so heartwarming because they just wanted to make sure we’d be okay.”

Jana Whitt, the general manager of McHugh’s Public House, said the restaurant laid off around 60 staff members last month, but the local support for take-out and delivery carries an important impact on keeping jobs available.

“Them coming and buying a burger and tipping when they are here — that’s the most helpful,” she said. “We want everything going to staff right now — McHugh’s is going to be OK.”

Whitt said she’s been busy calling employees to make sure they have what they need during the pandemic.

“If you need a box of cereal, gallon of milk, whatever you need — reach out,” she tells them. “They’re so important to us. They are the ones at the end of this that are going to turn this around.”

A record number of Minnesotans have applied for unemployment insurance.

A record number of Minnesotans have applied for unemployment insurance since the COVID-19 pandemic resulted in widespread business closures.

In three weeks alone, the number of applications exceeded the annual total for 2019. The state’s unemployment insurance program currently has more active applicants, almost 400,000, than ever in its 85-year history.

Who is seeking benefits?

Nearly half of Minnesota’s unemployment insurance applicants are between 25 and 44. Education doesn’t seem to play a role, with 28% of applicants having a high school education, 29.7% with some college education and 21.2% with a four-year degree. And most are white.

Emergency workers — like firefighters, law enforcement and military — are among the least affected, with less than 100 applicants in each field. More than 4,000 company executives have applied for unemployment insurance.

But as the pandemic continues to strain commerce, more and more workers are looking at what options are available for laid-off, furloughed and reduced-hour employees.

The Minnesota Department of Employment and Economic Development offers unemployment insurance for workers who can’t work, have their hours reduced or were laid-off as a result of the pandemic. Individuals who fit those descriptions can visit uimn.org to begin the process.

The online application system is available Monday through Friday from 6 a.m. to 6 p.m. and can take about 15 minutes to complete. Anyone can apply on Thursdays and Fridays; applications are limited to certain social security numbers Monday through Wednesday.

Applicants will need their driver’s license number or other state government identification number ready along with 18 months of employment history — including dates of employment, pay rates and each employer’s name, address and phone number.

Applications can also be completed over the phone Monday-Friday between 8 a.m. and 4:30 p.m., but DEED asked people to try online most often due to the high volume of applications.

DEED recommends individuals apply for benefits as soon as they lose their job or their hours are greatly reduced, because payment cannot be claimed for the period before an account is created.

In most cases, if an individual is unsure whether they qualify for the program, DEED recommends filling out an application anyway — if they’re eligible, the application should be approved.

Minnesota’s weekly unemployment payments are usually half a worker’s gross weekly wage, but since March 29 applicants have been eligible to receive an additional $600 weekly as part of the federal Coronavirus Aid, Relief, and Economic Security Act.

More information on COVID-19 unemployment benefits is at mn.gov/deed/newscenter/covid. 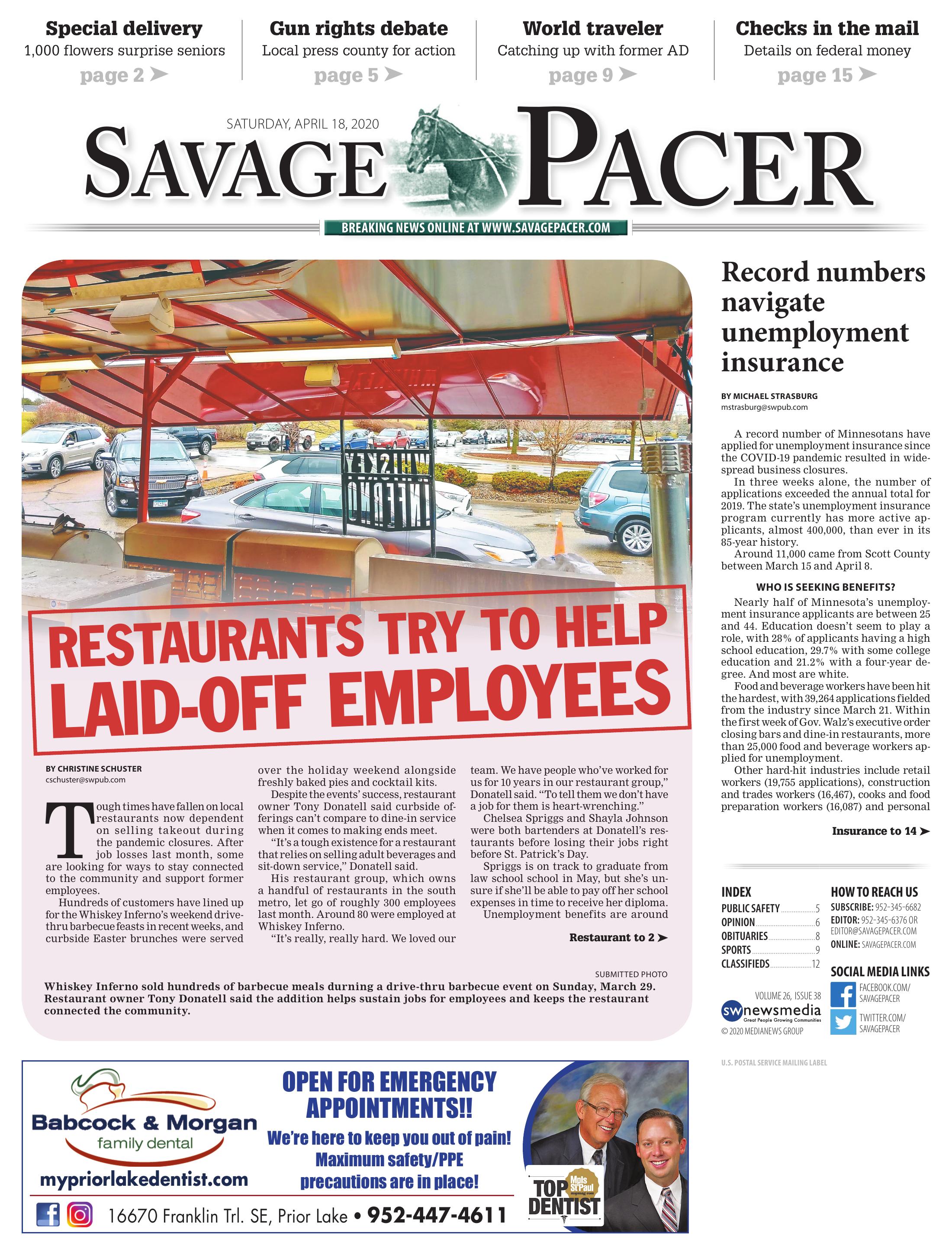