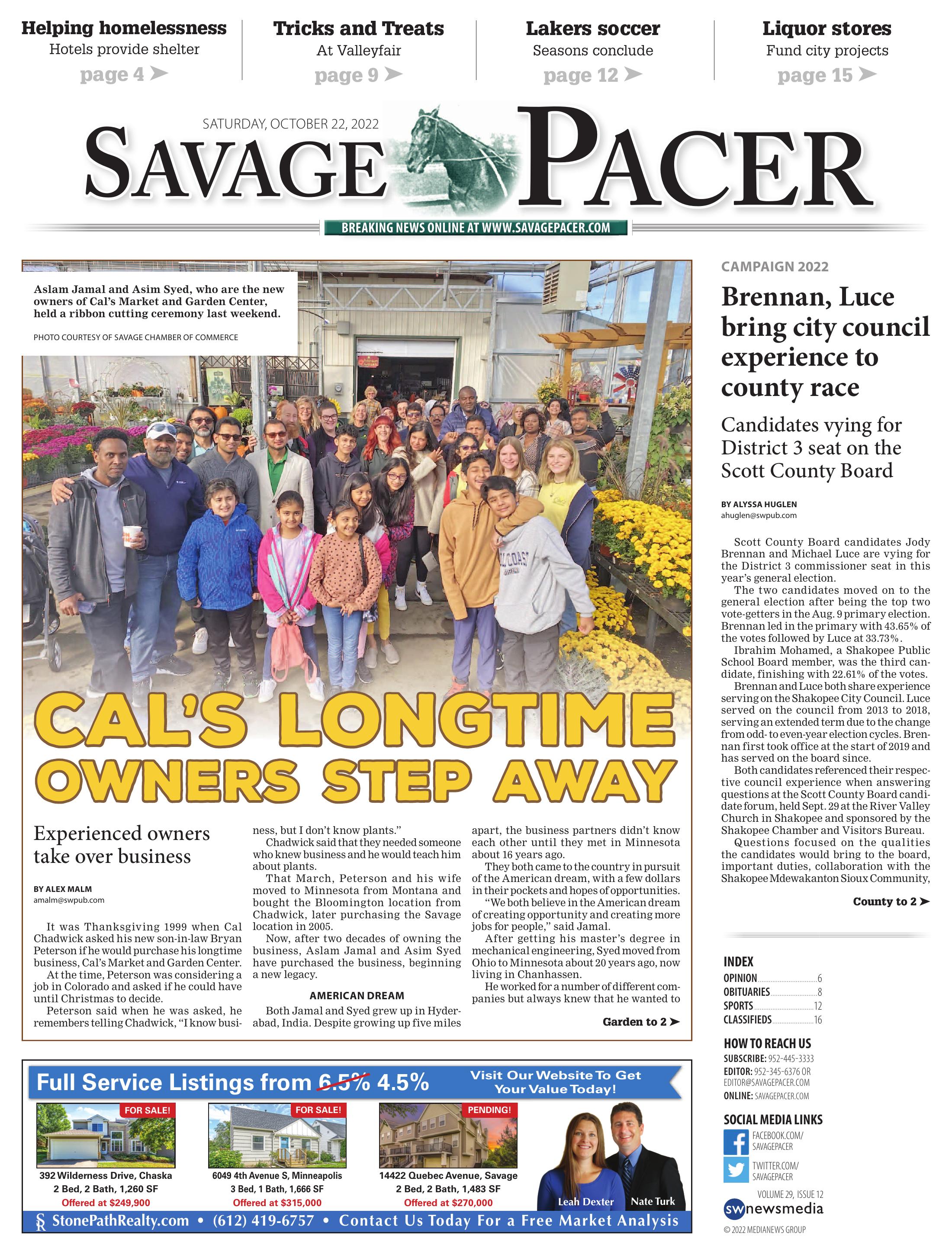 Aslam Jamal and Asim Syed, who are the new owners of Cal’s Market and Garden Center, held a ribbon cutting ceremony last weekend.

It was Thanksgiving 1999 when Cal Chadwick asked his new son-in-law Bryan Peterson if he would purchase his longtime business, Cal’s Market and Garden Center.

At the time, Peterson was considering a job in Colorado and asked if he could have until Christmas to decide.

Peterson said when he was asked, he remembers telling Chadwick, “I know business, but I don’t know plants.”

Chadwick said that they needed someone who knew business and he would teach him about plants.

That March, Peterson and his wife moved to Minnesota from Montana and bought the Bloomington location from Chadwick, later purchasing the Savage location in 2005.

Both Jamal and Syed grew up in Hyderabad, India. Despite growing up five miles apart, the business partners didn’t know each other until they met in Minnesota about 16 years ago.

They both came to the country in pursuit of the American dream, with a few dollars in their pockets and hopes of opportunities.

“We both believe in the American dream of creating opportunity and creating more jobs for people,” said Jamal.

After getting his master’s degree in mechanical engineering, Syed moved from Ohio to Minnesota about 20 years ago, now living in Chanhassen.

He worked for a number of different companies but always knew that he wanted to own a business one day, saying that even back in India, he wanted his dad to own his own business.

Syed eventually would go on to own his own businesses before taking over Kahnke’s Tree Farm in McLeod County about three years ago with Jamal.

Then on 9/11, his company’s office located in the twin towers collapsed, and he was without a job for a few years.

During that time, Jamal said he did a number of different jobs, including working at a gas station, washing floors and doing what he could to put food on the table.

He eventually got a job with Best Buy and moved to Minnesota in 2006.

Jamal said he and Syed both believe in giving back to the community, including creating opportunities and more jobs.

“America gave us so much in our life the last 20-25 years, so we want to give back,” said Jamal. “We are really thrilled to be part of the Savage community.”

As a longtime staple in the community, Cal’s has had many traditions that have gone on for decades.

It includes things like having a petting zoo every fall, which is being continued this month through the end of October.

Carina Peterson, whose father owned the business before her husband purchased it, said she enjoys the fall festival every year. When her kids were growing up, she enjoyed watching them go through the maze, with Chadwick saying that it was “pretty great.”

She also enjoyed going to the tree farm each year to cut down the trees for the business.

“We would actually go out to the farm where they would cut down the trees for Cal’s,” said Carina.

Bryan Peterson, who will stay on for a year to help with the transition, said that over the years, they got offers from different developers, but never sold to them. He said they are happy they were able to find someone who would continue to operate it as a greenhouse.

“I like the idea that it’s a family-owned business still,” said Bryan.

Over the weekend, the business had a grand opening event and they were asked if they would still celebrate Christmas even though they were of Muslim faith.

“We have employees that celebrate (Christmas), that means we extend the celebration to them,” said Jamal.

Jamal said that they plan to continue the legacy that was started and hope to expand it.

“Our plan is to take Cal’s to the next level,” said Jamal.

Scott County Board candidates Jody Brennan and Michael Luce are vying for the District 3 commissioner seat in this year’s general election.

The two candidates moved on to the general election after being the top two vote-getters in the Aug. 9 primary election. Brennan led in the primary with 43.65% of the votes followed by Luce at 33.73%.

Ibrahim Mohamed, a Shakopee Public School Board member, was the third candidate, finishing with 22.61% of the votes.

Brennan and Luce both share experience serving on the Shakopee City Council. Luce served on the council from 2013 to 2018, serving an extended term due to the change from odd- to even-year election cycles. Brennan first took office at the start of 2019 and has served on the board since.

Both candidates referenced their respective council experience when answering questions at the Scott County Board candidate forum, held Sept. 29 at the River Valley Church in Shakopee and sponsored by the Shakopee Chamber and Visitors Bureau.

Questions focused on the qualities the candidates would bring to the board, important duties, collaboration with the Shakopee Mdewakanton Sioux Community, the success rates of county programs, and business and economic development.

An audio recording of this candidate forum has been posted on the Shakopee Chamber and Visitors Bureau website and YouTube page. “Meet the Candidate” interviews for both Brennan and Luce are also featured on these sites.

Discussing qualities and experience, Luce brought up his time on the city council and involvement building an inclusive playground in town. “Part of my background is I had five years on the city council, and I listened to people,” he said. “I also hooked up with one of the groups that built the inclusive playground down at the park that I believe is a crowning achievement for our city. I was very honored to be part of it … and I would love to be part of additional things like that.”

Brennan, in her response, talked about her history establishing relationships in the area and how listening has helped strengthen her decision-making process.

“I just think we have such a responsibility to the taxpayers and to the other organizations that we have to deal with that we have to be well-versed in whatever you do,” she said. “I read a lot, I study, I ask questions and I never look at just one side as the definite way to make a decision. I try to get as much information from all sides.”

The candidates were also asked about what they believe to be a board member’s duties.

“The most important duties is to set policies, set the budget and tax levy, and provide oversight for every division in Scott County,” Brennan responded. “A lot of those are mandated roles, but we have to make sure that they’re being fiscally responsible in how they implement those policies.”

Luce said it is important for any elected official to “listen to the people you are serving.”

Scott County programs became a major focus of the conversation when both candidates were asked about which programs they find successful versus those needing improvement.

“I think that Human Services is very successful, but they’re also an area that could use improvement,” Luce said. “There’s so many people needing help with COVID and everything else that’s going on in this country right now … and people are hurting.”

“We need to get things more in line,” he added, regarding possible solutions. “I’m willing and able to listen to anything and everything anybody has for ideas on how we can bring things closer together.”

Brennan’s response to the question first honed in on county planning and development, citing the success in planning out roads and busing years into the future as a prime example. She also highlighted county staff in divisions and roles like Human Services, jailers and the 911 dispatch team.

“I think we have great staff that are well dedicated to their jobs … they’re working under external pressures with low staffing, but they’re doing what they can to make it work. That’s been very important to our community,” Brennan said.

Asked to name the most important issues facing Scott County residents, Luce brought up his concerns with COVID and its lasting effect in other areas, including its impact on school systems and children’s stress levels. He said although he feels there’s a handle on it, there’s also still a need to do better.

The winner of the District 3 board seat will replace Commissioner Mike Beard, who has held the position since 2015. Beard announced in May that he would not be seeking reelection. The general election is on Nov. 8.