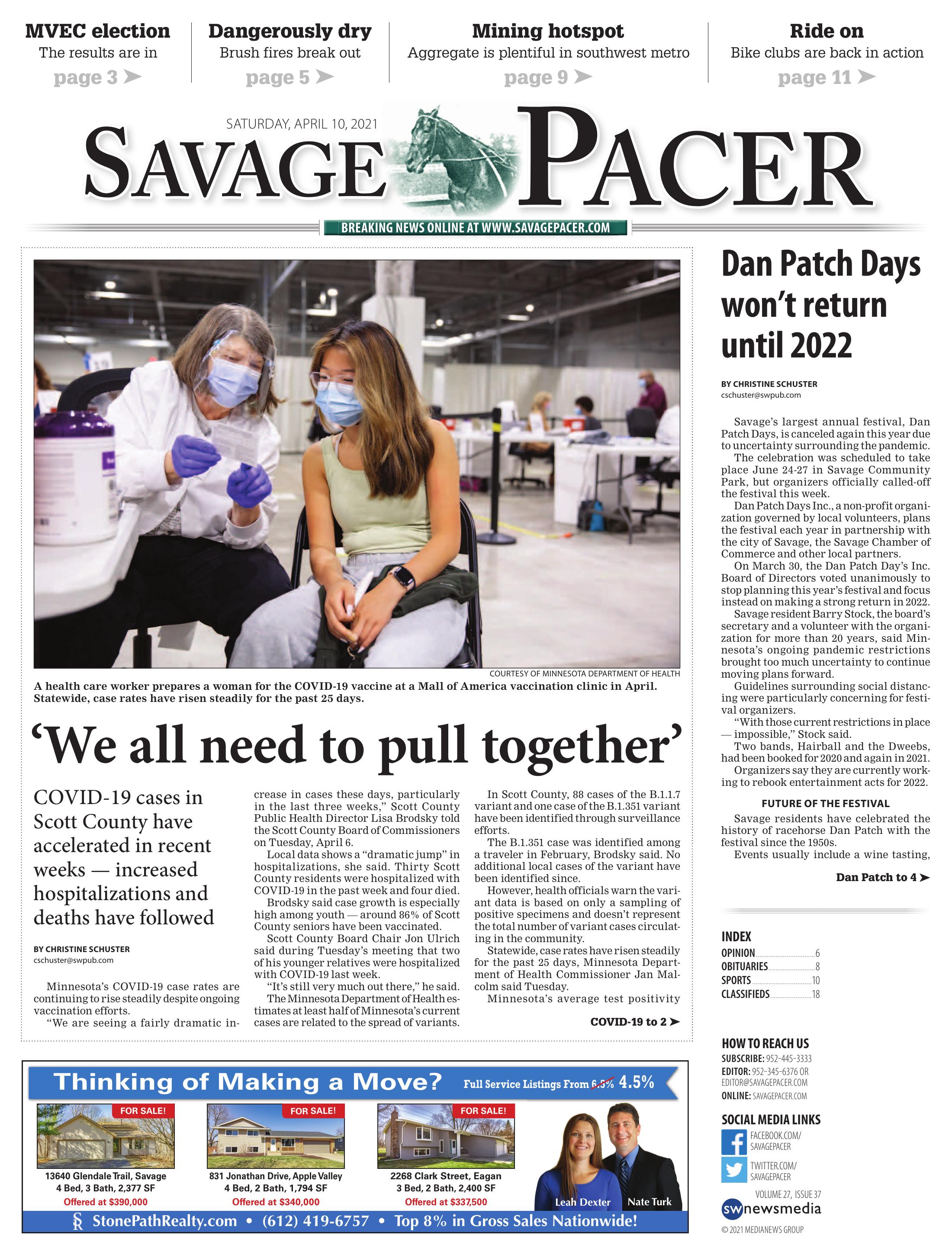 Aggregate is plentiful in southwest metro

"We are seeing a fairly dramatic increase in cases these days, particularly in the last three weeks," Scott County Public Health Director Lisa Brodsky told the Scott County Board of Commissioners on Tuesday, April 6.

Local data shows a "dramatic jump" in hospitalizations, she said. Thirty Scott County residents were hospitalized with COVID-19 in the past week and four died.

Brodsky said case growth is especially high among youth — around 86% of Scott County seniors have been vaccinated.

Scott County Board Chair Jon Ulrich said during Tuesday's meeting that two of his younger relatives were hospitalized with COVID-19 last week.

"It's still very much out there," he said.

In Scott County, 88 cases of the B.1.1.7 variant and one case of the B.1.351 variant have been identified through surveillance efforts.

The B.1.351 case was identified among a traveler in February, Brodsky said. No additional local cases of the variant have been identified since.

However, health officials warn the variant data is based on only a sampling of positive specimens and doesn't represent the total number of variant cases circulating in the community.

As of April 6, the state health department reports 497 Minnesotans are in the hospital being treated for COVID-19 with 114 in the intensive care unit.

COVID-19 related hospital bed usage is up by 40% in the last 10 days, Malcolm said Tuesday.

Distance learning for all students is recommended with 14-day case rates higher than 50 cases per 10,000 residents, according to MDH's guidelines.

In the prior reporting period, only three counties landed above this threshold.

On April 1, six schools in Scott County and nine schools in Carver County were listed as follows:

In March, the Shakopee Public Schools reported 114 newly confirmed cases among students — that's up from 67 confirmed student cases in February.

Last month's student caseload represents more than a quarter of the cumulative cases counted since September among both district students and staff.

Prior Lake-Savage Area Schools reports 154 students currently in quarantine as of April 1 after 11 cases were confirmed among students during the prior week.

To curb variant spread, MDH is recommending all school-age youth and their families be tested for COVID-19 every two weeks through the end of the school year. Youth involved in any extracurricular actives or sports should be tested weekly, guidance states.

In Scott County, over 42,000 residents, or roughly 39%, have received at least one vaccine dose and roughly 23%, have completed the two-dose series.

Burn restrictions are currently in place for 36 Minnesota counties due to fire conditions, according to the Minnesota Department of Natural Resources.

The results are in

Bike clubs are back in action

The celebration was scheduled to take place June 24-27 in Savage Community Park, but organizers officially called-off the festival this week.

Dan Patch Days Inc., a non-profit organization governed by local volunteers, plans the festival each year in partnership with the city of Savage, the Savage Chamber of Commerce and other local partners.

On March 30, the Dan Patch Day’s Inc. Board of Directors voted unanimously to stop planning this year’s festival and focus instead on making a strong return in 2022.

Savage resident Barry Stock, the board’s secretary and a volunteer with the organization for more than 20 years, said Minnesota’s ongoing pandemic restrictions brought too much uncertainty to continue moving plans forward.

“With those current restrictions in place — impossible,” Stock said.

Organizers say they are currently working to rebook entertainment acts for 2022.

Future of the festival

Savage residents have celebrated the history of racehorse Dan Patch with the festival since the 1950s.

Events usually include a wine tasting, pancake breakfast at the fire station, a horseshoe hunt, a parade in downtown Savage and a weekend of live music, food and fireworks.

While many festivals are planning to continue this summer, organizers of Dan Patch Days said they were concerned about having one of the first events on the summer calendar.

The governor’s restrictions may change before the end of June, but the time had come for Dan Patch Days organizers to begin spending operating dollars on the festival’s insurance and licenses — dollars that would be lost if the event needed to be canceled.

That’s too much of a risk, Stock said.

So rather than roll the dice, the organization’s current reserves will be saved to power the celebration in 2022 and ensure the festival’s return after the pandemic.

Beyond the pandemic, Stock said the future of Dan Patch Days rests on community support and connecting with more volunteers.

“We need more people to volunteer to either serve on the Board, or to help out with the celebration,” he said. “It’s a fun organization to be involved with.”

The board meets once a month throughout the year to plan the event.

Stock said he hopes 2022 will help replenish the organization’s reserves and build up a strong future for the event — however, he thinks new ideas and new faces will play a critical role in making that happen.