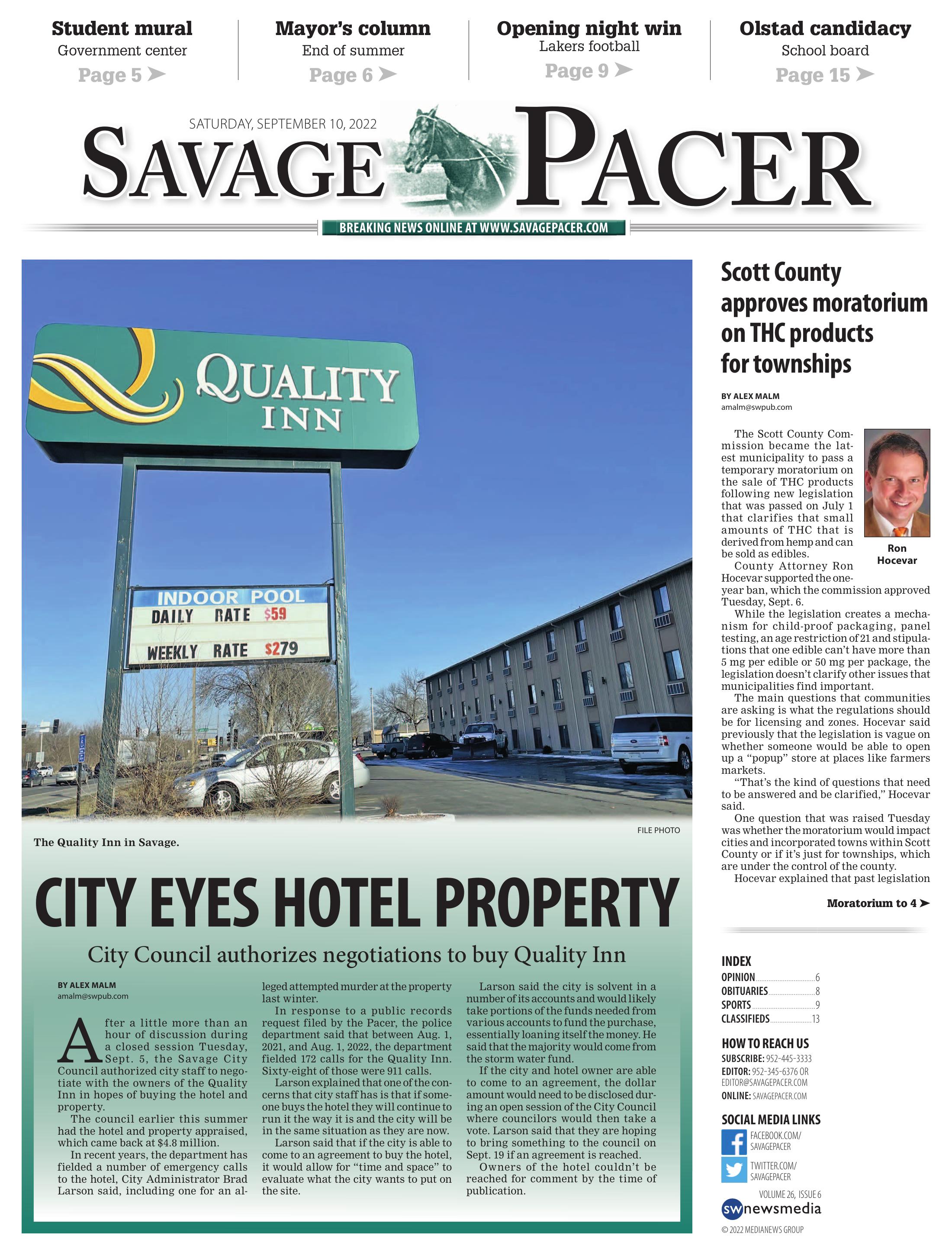 After a little more than an hour of discussion during a closed session Tuesday, Sept. 5, the Savage City Council authorized city staff to negotiate with the owners of the Quality Inn in hopes of buying the hotel and property.

The council earlier this summer had the hotel and property appraised, which came back at $4.8 million.

In recent years, the department has fielded a number of emergency calls to the hotel, City Administrator Brad Larson said, including one for an alleged attempted murder at the property last winter.

In response to a public records request filed by the Pacer, the police department said that between Aug. 1, 2021, and Aug. 1, 2022, the department fielded 172 calls for the Quality Inn. Sixty-eight of those were 911 calls.

Larson explained that one of the concerns that city staff has is that if someone buys the hotel they will continue to run it the way it is and the city will be in the same situation as they are now.

Larson said that if the city is able to come to an agreement to buy the hotel, it would allow for “time and space” to evaluate what the city wants to put on the site.

Larson said the city is solvent in a number of its accounts and would likely take portions of the funds needed from various accounts to fund the purchase, essentially loaning itself the money. He said that the majority would come from the storm water fund.

If the city and hotel owner are able to come to an agreement, the dollar amount would need to be disclosed during an open session of the City Council where councilors would then take a vote. Larson said that they are hoping to bring something to the council on Sept. 19 if an agreement is reached.

Owners of the hotel couldn’t be reached for comment by the time of publication.

The Scott County Commission became the latest municipality to pass a temporary moratorium on the sale of THC products following new legislation that was passed on July 1 that clarifies that small amounts of THC that is derived from hemp and can be sold as edibles.

“I am here to recommend to the board that you adopt Scott County ordinance 33,” County Attorney Ron Hocevar said.

While the legislation creates a mechanism for child-proof packaging, panel testing, an age restriction of 21 and stipulations that one edible can’t have more than 5 mg per edible or 50 mg per package, the legislation doesn’t clarify other issues that municipalities find important.

On Tuesday, the commissioners unanimously approved a one-year moratorium.

The main questions that communities are asking is what the regulations should be for licensing and zones. Hocevar said previously that the legislation is vague on whether someone would be able to open up a “popup” store at places like farmers markets.

“That’s the kind of questions that need to be answered and be clarified,” Hocevar said.

One question that was raised Tuesday was whether the moratorium would impact cities and incorporated towns within Scott County or if it’s just for townships, which are under the control of the county.

Hocevar explained that past legislation has allowed for county wide moratoriums and ordinances on different things. However, this isn’t one of those. “All the cities are on their own,” he said.

Some communities have already put in their own temporary moratoriums, including Jordan, Prior Lake, and Shakopee. Savage is expected to have a City Council workshop during its Sept. 12 meeting.

Hocevar explained that the temporary moratorium would be up to one year with the option of making it less if the commissioners come to a resolution sooner.

“You have to have a good faith discussion over the next year,” he said.

Hocevar said that during that time period it is expected that the legislature will work on clarifying the legislation.

Another issue that was raised was whether someone could still possess the THC products in a place where the temporary moratorium is in place.

Hocevar said it wouldn’t have an impact on anyone possessing the product as long as they are at least 21-years-old. He said, for example, that someone could go to a different city or town to buy the product and then bring it back home to consume.

Hocevar said it wouldn’t have an impact on the medical marijuana program or products that were legal before the July 1 legislation went into effect.