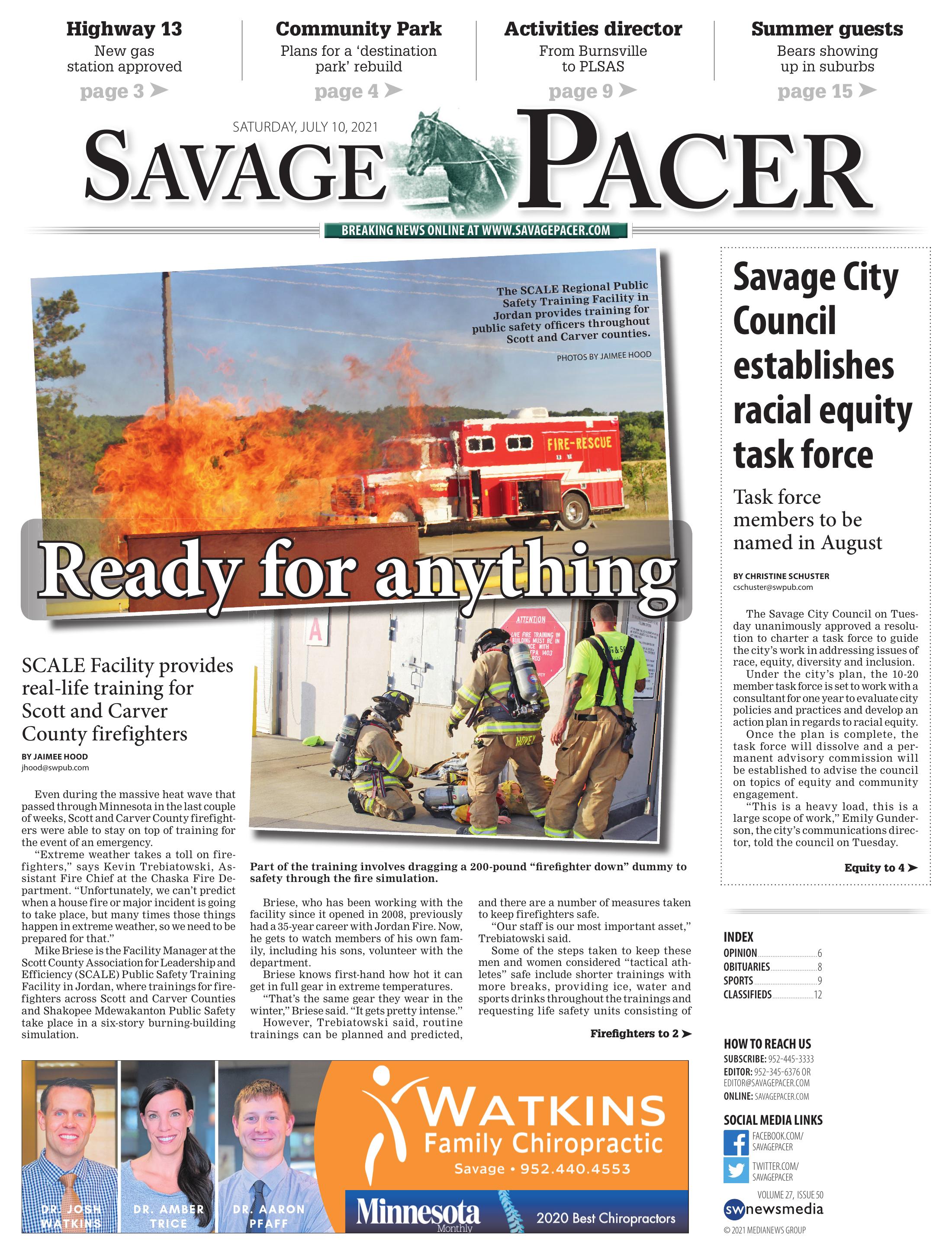 Part of the training involves dragging a 200-pound “firefighter down” dummy to safety through the fire simulation.

A small crew breaks in with an axe, readies their hose and enters the burning building.

A Brush Truck used by Jordan Fire, just one of the multitude of vehicles in their fleet.

Crew members outside the simulation man the fire truck, which has an emergency supply of water in case something were to go wrong.

Even during the massive heat wave that passed through Minnesota in the last couple of weeks, Scott and Carver County firefighters were able to stay on top of training for the event of an emergency.

“Extreme weather takes a toll on firefighters,” says Kevin Trebiatowski, Assistant Fire Chief at the Chaska Fire Department. “Unfortunately, we can’t predict when a house fire or major incident is going to take place, but many times those things happen in extreme weather, so we need to be prepared for that.”

Mike Briese is the Facility Manager at the Scott County Association for Leadership and Efficiency (SCALE) Public Safety Training Facility in Jordan, where trainings for firefighters across Scott and Carver Counties and Shakopee Mdewakanton Public Safety take place in a six-story burning-building simulation.

Briese, who has been working with the facility since it opened in 2008, previously had a 35-year career with Jordan Fire. Now, he gets to watch members of his own family, including his sons, volunteer with the department.

Briese knows first-hand how hot it can get in full gear in extreme temperatures.

“That’s the same gear they wear in the winter,” Briese said. “It gets pretty intense.”

However, Trebiatowski said, routine trainings can be planned and predicted, and there are a number of measures taken to keep firefighters safe.

“Our staff is our most important asset,” Trebiatowski said.

Some of the steps taken to keep these men and women considered “tactical athletes” safe include shorter trainings with more breaks, providing ice, water and sports drinks throughout the trainings and requesting life safety units consisting of tents, air conditioning units, misting fans and other tools to help keep firefighters cool.

Extreme weather isn’t the only obstacle local fire departments have faced over the past year and a half.

Typically, Trebiatowski said, the Chaska department trains at least once a week for two hours.

For the first few months of the pandemic at the beginning of 2020, they were unable to safely meet in-person, and switched to almost 100% online training.

Even now, Trebiatowski said, the Chaska department, like others in the region, uses smaller groups at staggered training times to allow for more spacing out of crews.

The SCALE facility in Jordan is one of only a few training facilities like it across the state of Minnesota, and it’s proved to be a valuable asset for nearby departments since it opened a little over a decade ago.

One of the key aspects of the facility is a multi-floor burning building simulation, which includes common situations firefighters may run into on the job like a kitchen fire, bedroom fire, locked door they must break into and lots of theatrical smoke.

There are also a variety of other “props” on fire including a dumpster, a car and a more contained unit where Briese said temperatures can get up to 1,500 degrees.

The blaze is never uncontrolled, though.

Multiple safety locks and switches prevent fire from spreading anywhere it’s not supposed to be, and allow experienced operators to turn off the flames at any time.

“It’s the closest to the real thing while still being safe,” Briese said.

Over the years, Briese has seen first-hand how valuable of a resource the facility is not only for the departments, but for the community as well.

“It’s a great resource that we have right here in our own backyard,” said Briese.

The Savage City Council on Tuesday unanimously approved a resolution to charter a task force to guide the city’s work in addressing issues of race, equity, diversity and inclusion.

Under the city’s plan, the 10-20 member task force is set to work with a consultant for one year to evaluate city policies and practices and develop an action plan in regards to racial equity.

Once the plan is complete, the task force will dissolve and a permanent advisory commission will be established to advise the council on topics of equity and community engagement.

“This is a heavy load, this is a large scope of work,” Emily Gunderson, the city’s communications director, told the council on Tuesday.

Gunderson said some city staff and council members will be chosen to serve on the task force, but the majority of its members will be local residents, local employees or local business owners who have expertise or relevant experiences in racial equity work.

“To date, over 25 individuals have already been identified — some are familiar faces and some are new to us,” Gunderson told council.

Under the city’s timeline, a recommendation to appoint task force members is set to go before the council in August and the task force will begin its work in September.

The resulting action plan is set to be presented to the council in December, 2022.