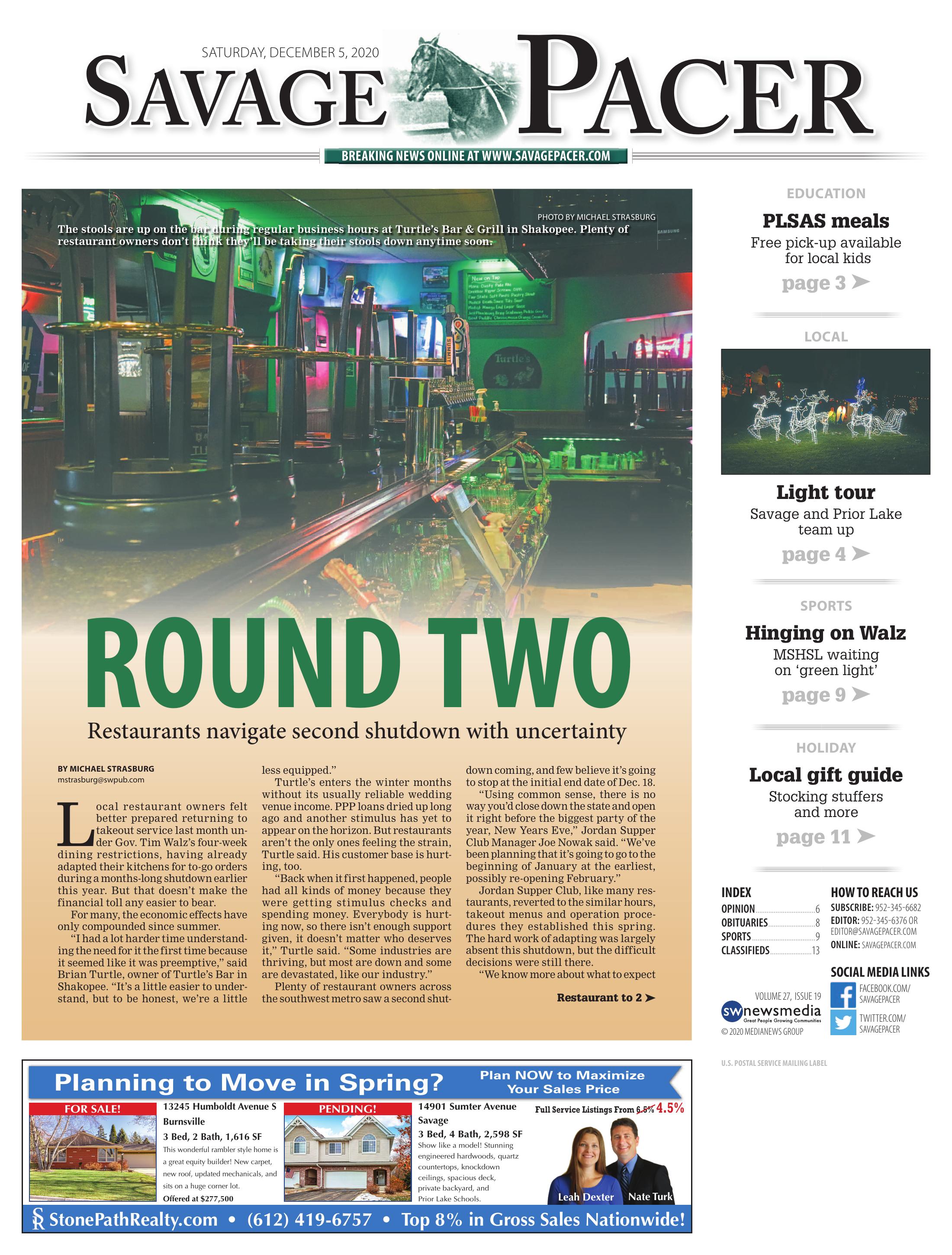 For many, the economic effects have only compounded since summer.

“I had a lot harder time understanding the need for it the first time because it seemed like it was preemptive,” said Brian Turtle, owner of Turtle’s Bar in Shakopee. “It’s a little easier to understand, but to be honest, we’re a little less equipped.”

Turtle’s enters the winter months without its usually reliable wedding venue income. PPP loans dried up long ago and another stimulus has yet to appear on the horizon. But restaurants aren’t the only ones feeling the strain, Turtle said. His customer base is hurting, too.

“Back when it first happened, people had all kinds of money because they were getting stimulus checks and spending money. Everybody is hurting now, so there isn’t enough support given, it doesn’t matter who deserves it,” Turtle said. “Some industries are thriving, but most are down and some are devastated, like our industry.”

Plenty of restaurant owners across the southwest metro saw a second shutdown coming, and few believe it’s going to stop at the initial end date of Dec. 18.

“Using common sense, there is no way you’d close down the state and open it right before the biggest party of the year, New Years Eve,” Jordan Supper Club Manager Joe Nowak said. “We’ve been planning that it’s going to go to the beginning of January at the earliest, possibly re-opening February.”

Jordan Supper Club, like many restaurants, reverted to the similar hours, takeout menus and operation procedures they established this spring. The hard work of adapting was largely absent this shutdown, but the difficult decisions were still there.

“We know more about what to expect and how many people we need to do each job,” said Joe Donatell, owner of Whiskey Inferno in Savage and Tequila Butcher in Chanhassen. “That takes a lot of anxiety out, but it doesn’t make it any easier, especially just before the holidays, to have to lay off at least half of our staff. It’s heartbreaking.”

Cuzzy’s Brick House was expecting a big year, celebrating 10 years in Chaska, and 20- and 25-year milestones at other locations in Victoria and Minneapolis. Instead, it spent the first two and a half months of the spring shutdown with its doors closed.

Now, Cuzzy’s owner Dan Lee is doing everything he can to keep his staff on the payroll.

“It’s been tough,” Lee said. “It hasn’t been good since (Gov. Walz) spoke on (Nov. 10). Business took a dramatic downturn at that point and now we’re trying to keep our staff employed — it’s the reason we’re open ... we’re trying to stop the bleeding a little and keep some people employed.”

Gov. Walz put forth a proposal last week that would provide direct aid to affected businesses and regulatory fee waivers for bars and restaurants, while Republicans have floated the idea of passing $400 million in business grants in addition to providing tax relief. Both sides have yet to come together to discuss the proposals in a special session.

On the federal level, Congress has reconvened for a short session that will end before Christmas. Both President Donald Trump and President-Elect Joe Biden in recent weeks have called for Congress to pass a new relief bill.

But for the time being, restaurants are on their own — resulting in a constant state of tracking finances, reassessing menus and developing gift card and other promotions in order to keep their heads above water.

But that can only work for so long — and so few.

Turtle said the industry needs federal support to weather the winter season without indoor dining. His restaurant, he said, is in a position — thanks to decades of community support — to take a loss and make it through the winter without aid. But plenty of others are not in the same boat.

“We’ll need federal help in the form of another PPP loan or something ... It’s going to be the strongest and the most efficient and the smartest that survive right now, that’s the only thing I can say. It’s really sad.”

Unlike many others in the industry, Lee owns the property for his restaurants. Despite mortgage payments, he has the option — if worst comes to worst — to cut his losses by closing his doors and weathering the storm until spring.

“Without an additional round of stimulus from the government, I don’t think a lot of people will be here come March or April, for a variety of reasons,” Lee said. “If people don’t own the property there are a lot of early-outs on leases.”

“We’re still paying utilities, we’re still paying all of our overhead, but we’re not allowed to serve customers,” Donatell said. “It’s really challenging, from a financial standpoint, to do what’s good for public health but receive basically no assistance.”

Looking ahead, a mixture of government aid, business acumen, loyal customers and a pinch of luck seem to be the recipe for success this winter — but those ingredients are increasingly hard to find. 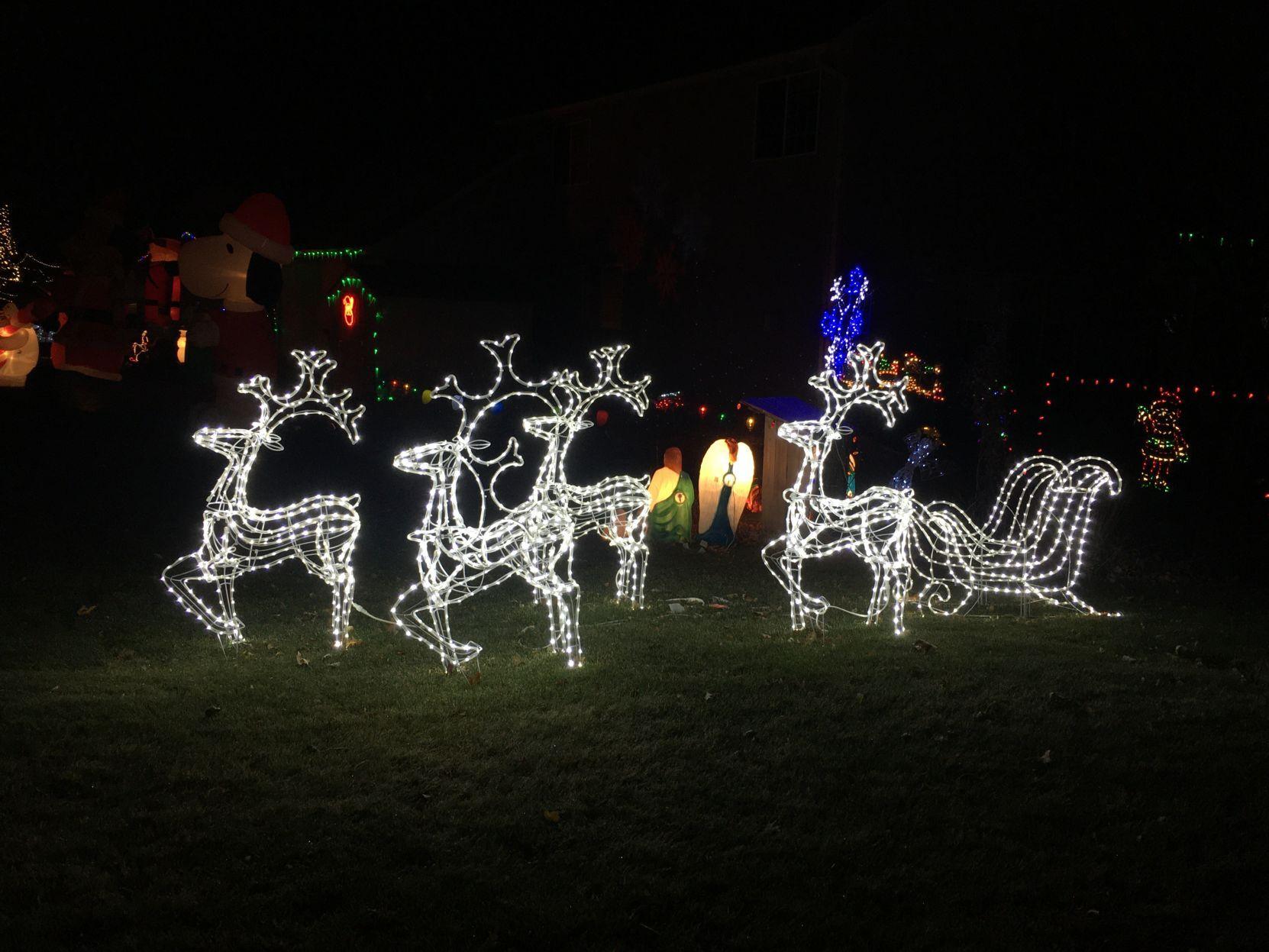 A Christmas display lights up the 8000 block of Carriage Hill Road in Savage. Residents can check the Making Spirits Bright Holiday Light Tour map to find homes with Christmas light displays throughout Prior Lake and Savage area through the month of December.