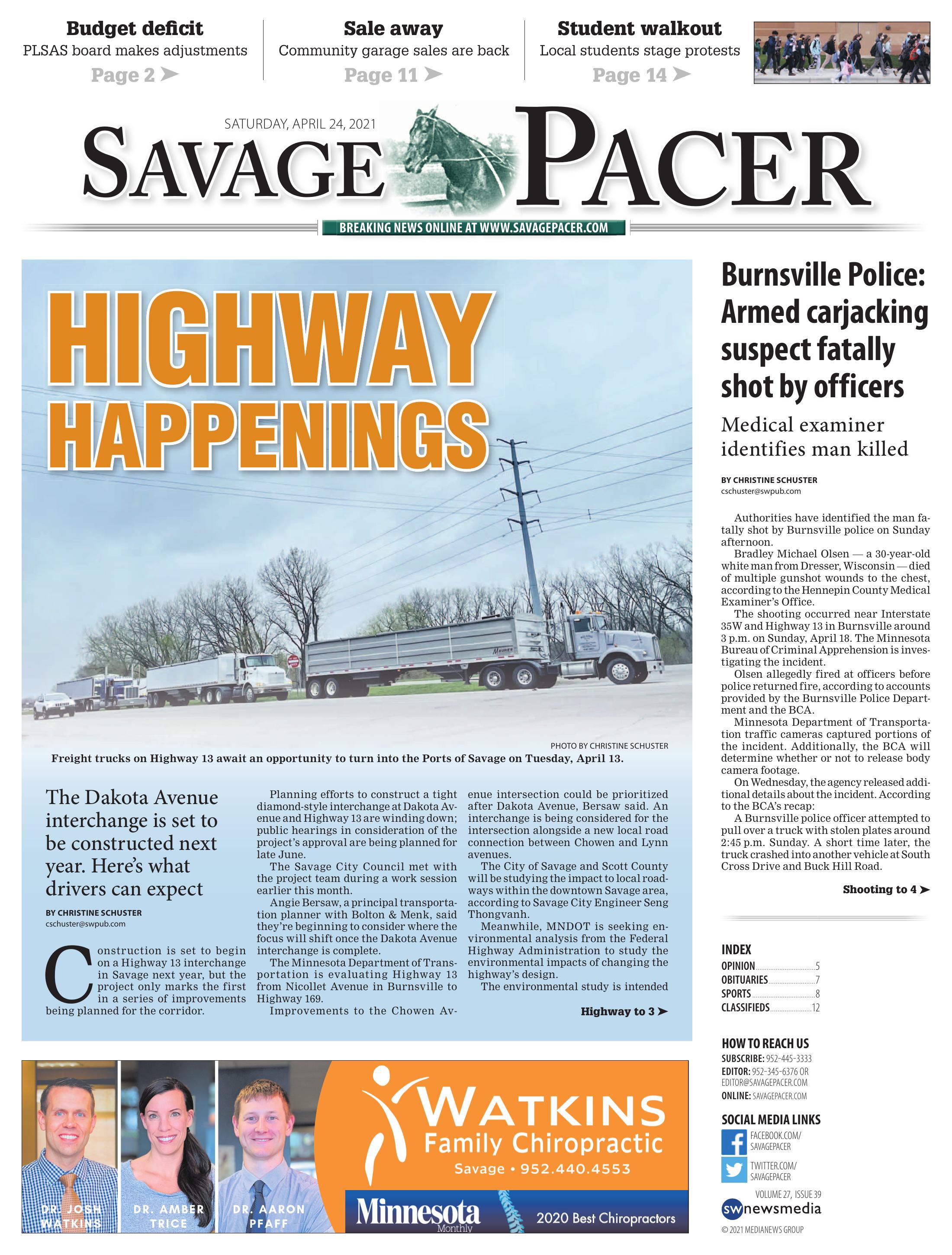 Courtesy of Minnesota Department of Transportation.

Construction is set to begin on a Highway 13 interchange in Savage next year, but the project only marks the first in a series of improvements being planned for the corridor.

Planning efforts to construct a tight diamond-style interchange at Dakota Avenue and Highway 13 are winding down; public hearings in consideration of the project’s approval are being planned for late June.

The Savage City Council met with the project team during a work session earlier this month.

Angie Bersaw, a principal transportation planner with Bolton & Menk, said they’re beginning to consider where the focus will shift once the Dakota Avenue interchange is complete.

The Minnesota Department of Transportation is evaluating Highway 13 from Nicollet Avenue in Burnsville to Highway 169.

Improvements to the Chowen Avenue intersection could be prioritized after Dakota Avenue, Bersaw said. An interchange is being considered for the intersection alongside a new local road connection between Chowen and Lynn avenues.

The City of Savage and Scott County will be studying the impact to local roadways within the downtown Savage area, according to Savage City Engineer Seng Thongvanh.

Meanwhile, MNDOT is seeking environmental analysis from the Federal Highway Administration to study the environmental impacts of changing the highway’s design.

The environmental study is intended to provide clearance for a variety of possible changes to the corridor.

State transportation officials say seeking environmental review for a larger footprint of design options will provide flexibility when funding becomes available for future improvements — not all the of designs on the table will be constructed.

The environmental review findings will be adopted following the public hearing being planned for late June.

The design is intended to improve safety and access to the commercial businesses along the Minnesota River.

The interchange may also include an aesthetic nod to the river port businesses, according to plans presented to Savage officials this month.

The project team is considering adding design elements that would connect to the surrounding natural environment, river and economic significance of the grain terminals.

Elements such as concrete engravings are being considered.

During construction of the interchange, Highway 13 will remain open with a single lane of traffic in both directions, according to Chris Chromy, a principal transportation engineer on the project with Bolton & Menk.

The south frontage road will also remain open, and U-turns at Quentin Avenue and Highway 101 will enable access to the river ports.

During the first phase of construction, traffic will be shifted into the existing westbound lanes while the elevated structures are built in the summer of 2022.

Traffic will then be shifted onto the new roadway while additional work is completed.

Four lanes are expected to re-open in the fall of 2022 ahead of the project’s completion in the spring or early summer of 2023. 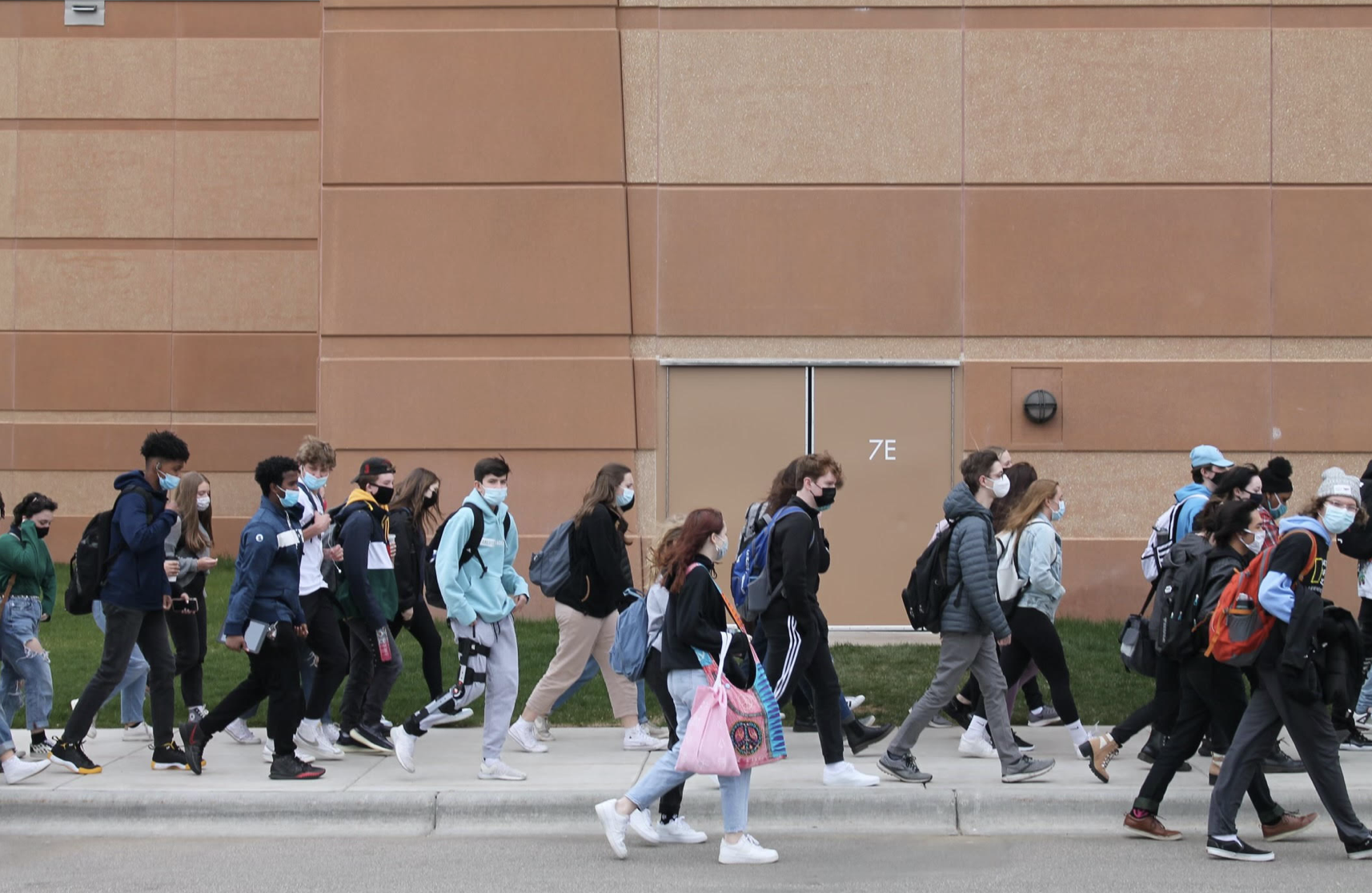 Students across Minnesota participated in a walkout Monday, April 19 in protest of racial injustices.

Minnesota Department of Transportation traffic cameras captured portions of the incident. Additionally, the BCA will determine whether or not to release body camera footage.

The Minnesota Bureau of Criminal Apprehension is investigating after Burnsville police shot and killed a man suspected in an alleged armed carjacking on Sunday, April 18.

Authorities have identified the man fatally shot by Burnsville police on Sunday afternoon.

Bradley Michael Olsen — a 30-year-old white man from Dresser, Wisconsin — died of multiple gunshot wounds to the chest, according to the Hennepin County Medical Examiner's Office.

The shooting occurred near Interstate 35W and Highway 13 in Burnsville around 3 p.m. on Sunday, April 18. The Minnesota Bureau of Criminal Apprehension is investigating the incident.

Olsen allegedly fired at officers before police returned fire, according to accounts provided by the Burnsville Police Department and the BCA.

Minnesota Department of Transportation traffic cameras captured portions of the incident. Additionally, the BCA will determine whether or not to release body camera footage.

On Wednesday, the agency released additional details about the incident. According to the BCA's recap:

A Burnsville police officer attempted to pull over a truck with stolen plates around 2:45 p.m. Sunday. A short time later, the truck crashed into another vehicle at South Cross Drive and Buck Hill Road.

The truck's driver, identified as Olsen, continued driving before the vehicle became disabled at South Cross Drive and Burnhaven Drive.

Olsen then fled the scene, the BCA alleges, and entered a restaurant in the 14000 block of Buck Hill Road. He snatched a customer's keys from their table and fled in their vehicle.

Olsen took the Highway 13 eastbound exit, slowed the vehicle and jumped out. He then ran onto Highway 13 and allegedly pointed a gun at an oncoming vehicle, which turned into the grass median to flee.

"As Olsen attempted to flee the area, officers on the entrance ramp discharged their firearms, striking Olsen," the BCA stated.

Olsen was pronounced dead at the Hennepin County Medical Center. There were no other injuries reported.

The BCA's investigation is ongoing. Once complete, the Ramsey County Attorney's Office will review the findings.