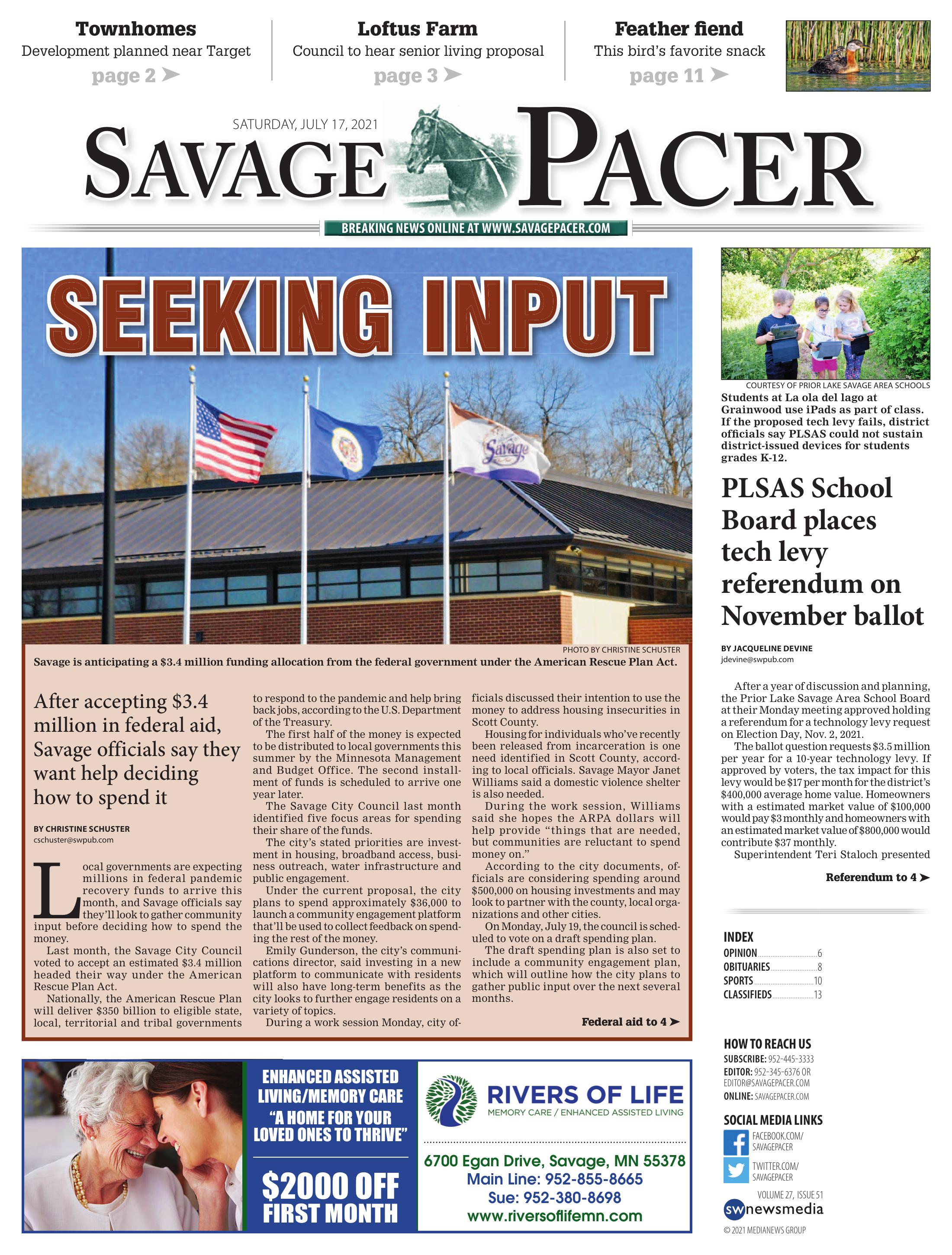 Savage is anticipating a $3.4 million funding allocation from the federal government under the American Rescue Plan Act.

Local governments are expecting millions in federal pandemic recovery funds to arrive this month, and Savage officials say they’ll look to gather community input before deciding how to spend the money.

Nationally, the American Rescue Plan will deliver $350 billion to eligible state, local, territorial and tribal governments to respond to the pandemic and help bring back jobs, according to the U.S. Department of the Treasury.

The first half of the money is expected to be distributed to local governments this summer by the Minnesota Management and Budget Office. The second installment of funds is scheduled to arrive one year later.

Under the current proposal, the city plans to spend approximately $36,000 to launch a community engagement platform that’ll be used to collect feedback on spending the rest of the money.

Emily Gunderson, the city’s communications director, said investing in a new platform to communicate with residents will also have long-term benefits as the city looks to further engage residents on a variety of topics.

During a work session Monday, city officials discussed their intention to use the money to address housing insecurities in Scott County.

Housing for individuals who’ve recently been released from incarceration is one need identified in Scott County, according to local officials. Savage Mayor Janet Williams said a domestic violence shelter is also needed.

During the work session, Williams said she hopes the ARPA dollars will help provide “things that are needed, but communities are reluctant to spend money on.”

According to the city documents, officials are considering spending around $500,000 on housing investments and may look to partner with the county, local organizations and other cities.

On Monday, July 19, the council is scheduled to vote on a draft spending plan.

The draft spending plan is also set to include a community engagement plan, which will outline how the city plans to gather public input over the next several months.

On Tuesday, the Scott County Board of Commissioners adopted a resolution accepting the county’s ARPA allocation of roughly $28.9 million.

“You would not believe the strings attached and the hoops we have to jump through to even spend $2,000 of this,” Board Vice Chair Mike Beard said. “I’m sure Washington means well, but they sent us almost $29 million dollars and made it incredibly difficult to spend it.”

Beard said county officials should try to lower expectations for the impact the money will have on Scott County’s levy.

“There are several counties around the state that’ve said ‘no thanks’ because the hassle of spending it is worth more than the few dollars they got from the feds,” he added.

The new round of federal aid will be less time-sensitive than the funds received last year under the Coronavirus Aid, Relief, and Economic Security (CARES) Act. 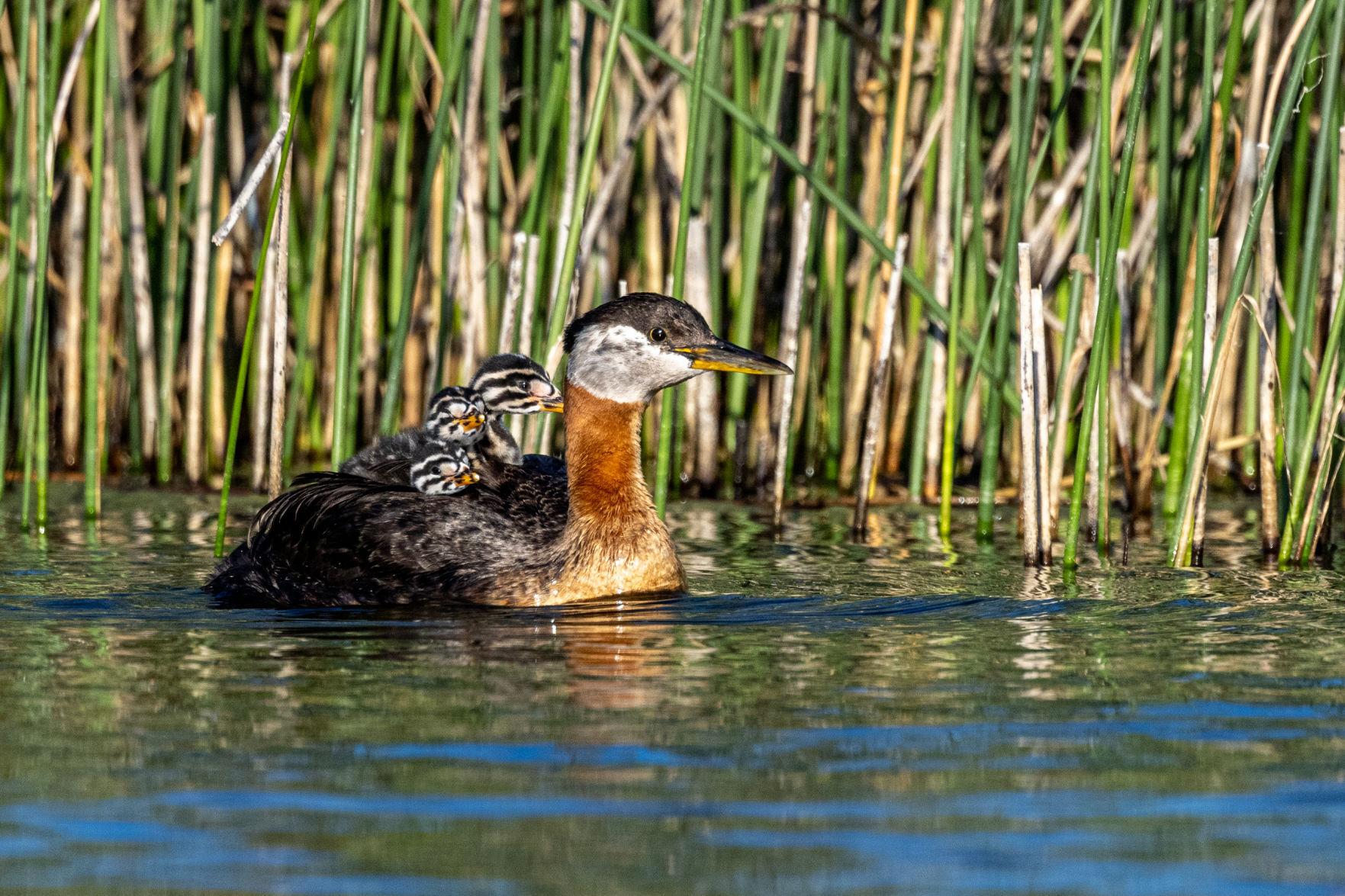 A red-necked grebe adult, with babies on its back.

Students at La ola del lago at Grainwood use iPads as part of class. If the proposed tech levy fails, district officials say PLSAS could not sustain district-issued devices for students grades K-12.

Top – The cafeteria and serving areas at Prior Lake High School.

After a year of discussion and planning, the Prior Lake Savage Area School Board at their Monday meeting approved holding a referendum for a technology levy request on Election Day, Nov. 2, 2021.

Superintendent Teri Staloch presented the final technology levy recommendation, reminding board members that PLSAS is one of the few districts in the region that does not have a voter approved levy dedicated to funding technology.

“This means we have to draw from our operating budget to support technology needs putting more pressure on all the other needs that our schools and our students have,” said Staloch. “For the past few years our technology budget has been relatively steady at about $3.5 million per year.”

Why a tech levy?Staloch said technology is becoming a critical component to classroom learning and having a voter-approved tech levy would help students and staff become more successful.

“Whether it’s the devices that students and staff use, the instructional software or curriculum resources or the infrastructure that helps keep our technology working, technology is an important part of our budget,” said Staloch. “Having a tech levy would provide us with a dedicated source of funding for our classroom and it would free up money from the General Fund for other student supports and our academic programs.”

If the tech levy passes in November, Staloch added, the funds would enable the district to provide all students and staff with devices to meet their needs as well as improve safety and security, classroom learning, network infrastructure and operational software plus technology support.

In addition, Staloch said it’s critical that the 10-year tech levy also builds in device replacement cycles so that staff and students have the technology that meets their learning and teaching needs.

The district has conducted several technology surveys presented to staff, students and the community along with student focus groups and input from other district groups.

“While the majority of our community believes that technology is absolutely essential for our students, the majority rate our technology quality as good, not excellent,” Staloch said. “That tells us we have room for improvement as we seek excellence in technology which is an area of critical importance to having excellence in our learning environment.”

If the proposed tech levy fails, district officials say PLSAS could not sustain district-issued devices for students grades K-12, and would need to further reduce the amount of devices it has for staff district-wide. Additionally, the district says there would not be adequate funding to replace aging security equipment, it would need to postpone new operational software, current staffing levels would remain static and there would be an additional financial burden on the General Fund, resulting in continued budget cuts.

Staloch stated that while the district is grateful for any additional state funding, those dollars have not kept pace with inflation and increasing educational costs.

“There’s been a lot of talk about COVID relief dollars going to schools and while we’re grateful for these COVID reliefs funds, these are one-time funds designated to help schools cover pandemic related costs and will not help with our long term budget sustainability,” Staloch said. “In fact, our combined COVID related costs and revenue losses have exceeded our relief funds by more than $4 million leaving us with a COVID related deficit.”

PLSAS were in the bottom five percent of all Minnesota school districts and charter schools in the amount of federal COVID relief dollars per student.

Board member Mary Frantz said having a tech levy in place really hit home for her during the pandemic after seeing some students struggle studying from home without proper equipment.

“Some of the districts that rank the highest have some of the best tech levies, and I think that’s a direct correlation and we should not ignore that statistic,” said Frantz. “It is heartbreaking to see the kids who do not have the devices they need in order to succeed. It really hit home during COVID when kids of all levels and backgrounds were crowded into the Caribou parking lot with an iPad typing eight page papers with their fingers.”

Frantz said in order for students to succeed in life it is crucial in today’s environment that they have the tools they need to advance after high school and beyond.

Board member Jonathan Drewes said after a year of discussing the proposed tech levy, he is ready to move forward with it.

“This is in the best interest of our students. Technology is something that 20 years ago made up a small portion of our budget, not just at school but at home, and it’s changed for all of us,” said Drewes. “We might hear from the community that it’s the wrong time and we’ll make adjustments, but I’m optimistic the community will support this.”

The district will prepare informational materials for community members, including a dedicated referendum website, presentations, materials and mailings. Questions can be directed to input@priorlake-savage.k12.mn.us.