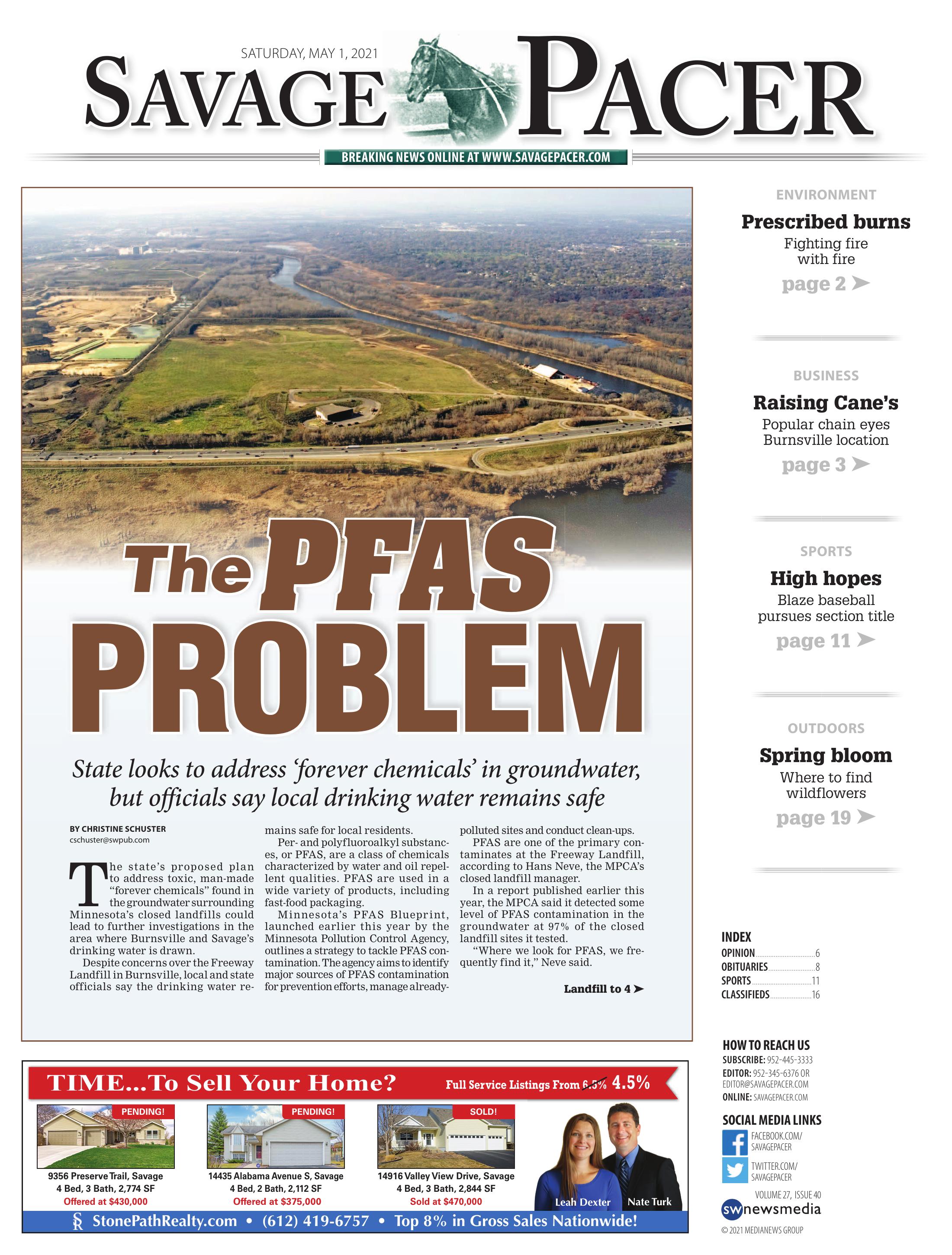 The state’s proposed plan to address toxic, man-made “forever chemicals” found in the groundwater surrounding Minnesota’s closed landfills could lead to further investigations in the area where Burnsville and Savage’s drinking water is drawn.

Despite concerns over the Freeway Landfill in Burnsville, local and state officials say the drinking water remains safe for local residents.

Per- and polyfluoroalkyl substances, or PFAS, are a class of chemicals characterized by water and oil repellent qualities. PFAS are used in a wide variety of products, including fast-food packaging.

PFAS are one of the primary contaminates at the Freeway Landfill, according to Hans Neve, the MPCA’s closed landfill manager.

In a report published earlier this year, the MPCA said it detected some level of PFAS contamination in the groundwater at 97% of the closed landfill sites it tested.

“Where we look for PFAS, we frequently find it,” Neve said.

The levels detected measured around 5% of the Environmental Protection Agency’s regulatory limit both times, according to Peterson.

The PFAS data released this year by the MPCA reflects testing conducted in 2018. Burnsville and Savage’s drinking water will be tested for PFAS again this year, but Peterson said he isn’t expecting any significant changes.

“PFAS stay in the human body for long periods of time,” according to the EPA. “As a result, as people are exposed to PFAS from different sources over time, the level of PFAS in their bodies may increase to the point where they suffer from adverse health effects.”

Dewatering operations at the quarry intercept the flow of millions of gallons of groundwater each day.

The water is then pumped southward and westward to water treatment plants, where it becomes the municipal water of Burnsville and Savage. The landfill, where the trash sits unlined, directly on bedrock, is north of the quarry.

“Our greatest concern about the Freeway Landfill is what happens when the quarry pumping stops,” Koudelka said.

Once the quarry’s pumping operations cease, models predict the water table will rise and saturate the waste at Freeway Landfill, thus contaminating Savage and Burnsville’s drinking water, according to the MPCA.

The MPCA is pursuing a cleanup of both the Freeway Landfill and Freeway Dump. A proposed bill in the Legislature would give the MPCA access to the land and enable moving forward with the bidding process.

The provision is needed because the property owner is uncooperative and won’t give the MPCA access to the land, according to Koudelka.

The state is proposing two options for cleaning up the sites.

In the dig-and-haul scenario, the waste would be excavated and dumped at an operating landfill.

Burnsville officials have widely expressed support for this option. In particular, local officials have supported bringing the waste to the nearby Burnsville Sanitary Landfill operated by Waste Management.

In a dig-and-line scenario, the waste would be excavated and then laid to rest on-site with an engineered liner underneath and cap overtop.

‘Why are we waiting?’

During the MPCA’s investigation, only one closed landfill site — the Gofer Landfill north of Fairmont — yielded higher PFAS values than the Freeway Landfill.

Billeye Rabbe, director of the Prairieland Solid Waste Management facility in Martin County, is a lifelong resident of Rutland Township, where the Gofer Landfill is located.

“It used to be the out of sight, out of mind mentality with a landfill,” she said.

Twenty years later, after the Gofer Landfill closed in 1986, it underwent a clean up similar to the dig-and-line solution being proposed for the Freeway Landfill.

“Luckily, I feel like we are doing the best thing that we can for the waste in our community because it’s being burned for electricity,” Rabbe said. “We’ve moved light years ahead, but now we have to go back and clean up messes.”

After the MPCA published its PFAS findings, Rabbe began fielding calls and emails from local residents wondering if they should buy bottled water. Rutland Township residents were surprised by the report, she said; they thought the previous clean-up solved their problems.

According to the MPCA, drinking water wells within a mile of the landfill were tested and PFAS was not detected. However, the agency said further investigation is needed to fully understand the problem.

Rabbe said she doesn’t want to keep waiting, but hopes lawmakers will act quickly to support investigations and clean-ups.

“Why are we waiting?” she said. “Why aren’t we doing more action?”

Additionally, she said she hopes the findings will inspire deeper thinking about PFAS use and landfilling.

“When you realize that it’s a product that’s eternal, it doesn’t go away — and then you look at the products it’s contained in — it’s very scary,” she said.