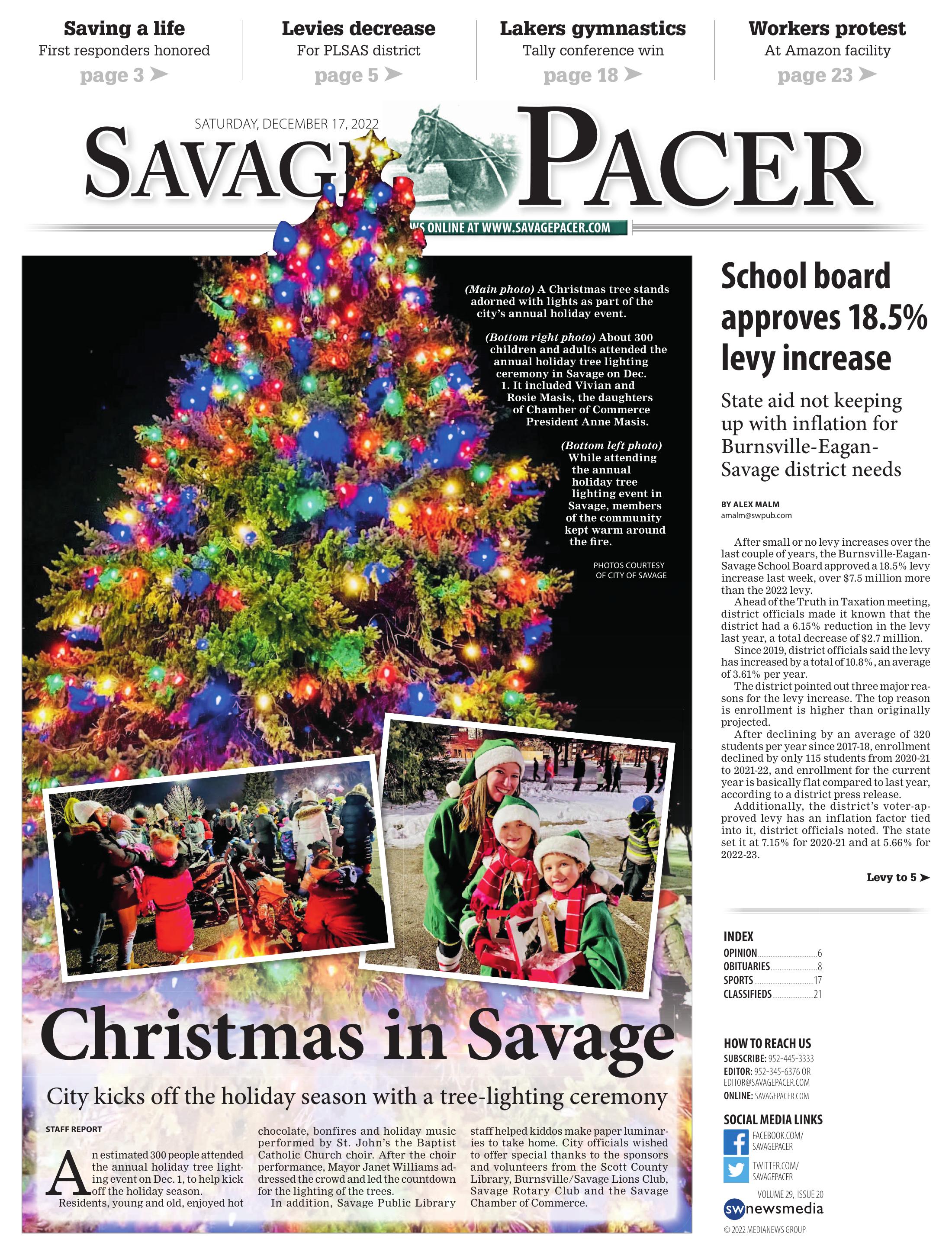 Savage_pacer
Christmas in Savage
Photo courtesy of City of Savage

Volunteers from the Scott County Library, Burnsville/Savage Lions Club, Savage Rotary Club, and the Savage Chamber of Commerce, helped with the annual holiday event in Savage.

Photo courtesy of City of Savage

About 300 children and adults attended the annual holiday tree lighting ceremony in Savage on Dec. 1. It included Vivian and Rosie Masis, the daughters of Chamber of Commerce President Anne Masis.

Photo courtesy of City of Savage

While attending the annual holiday tree lighting event in Savage, members of the community kept warm around the fire.

An estimated 300 people attended the annual holiday tree lighting event on Dec. 1, to help kick off the holiday season.

Residents, young and old, enjoyed hot chocolate, bonfires and holiday music performed by St. John’s the Baptist Catholic Church choir. After the choir performance, Mayor Janet Williams addressed the crowd and led the countdown for the lighting of the trees.

After small or no levy increases over the last couple of years, the Burnsville-Eagan-Savage School Board approved a 18.5% levy increase last week, over $7.5 million more than the 2022 levy.

Ahead of the Truth in Taxation meeting, district officials made it known that the district had a 6.15% reduction in the levy last year, a total decrease of $2.7 million.

The district pointed out three major reasons for the levy increase. The top reason is enrollment is higher than originally projected.

After declining by an average of 320 students per year since 2017-18, enrollment declined by only 115 students from 2020-21 to 2021-22, and enrollment for the current year is basically flat compared to last year, according to a district press release.

“This project is necessary for the effective operation of the school and will save money in the long run because of increased efficiency,” the release read.

For the 2022-2023 budget, 65.1% was made up of state aid. But the amount districts receive per student doesn’t match inflation, said Matthew Hammer, a senior municipal advisor with Ehlers.

“The current formula is $6,863 per student. If that kept up with inflation, it would have been a little over $8,000 per student,” Hammer said. “That’s about an 18% reduction in revenue over that time.”

Hammer said that due to the lack of state funding, it means the district pays about $12 million a year out of the general operating budget to offset the underfunding of education programs.

Stacey Sovine, executive director of administrative services, noted that there is no certainty that there will be any changes made to the state funding formula.

“That is through (fiscal year 2023), so through our current budget,” Sovine said. “We don’t know what the number is going to be going forward. I don’t expect that to back up but I don’t know exactly what it will increase either.”

Another large portion of the budget went to purchased services, a total of 13.1%. Hammer said that includes the transportation contract, a major part of that expense.

Capital expenditures made up 3.7% of the general fund budget, 2.4% went to supplies and materials and the rest went to other expenses.

While the school board isn’t expected to vote on a proposed budget for 2023-2024 until the summer, Superintendent Theresa Battle laid out a preliminary picture of what the budget could look like.

“Similar to our state, I am hoping that we develop a budget that reflects our expenditures, not only for the one year, but a look at the next year so a two-year period and continue funding what we value,” Battle said.

In a memo to the school board, the administration laid out some possible preliminary budget concerns including the impacts on projections.

“We expect single and possibly double-digit increases in costs for transportation, food, supplies and utilities,” the memo reads.

Another preliminary budget challenge are the one-time dollars given to school districts in response to COVID-19 known as the Elementary and Secondary School Emergency Relief Fund.

“ISD191 has received significant federal funds through (fiscal year 2024) and must be prepared with a sustainable budget without these funds,” the memo reads.

In a follow-up email, Aaron Tinklenberg, a spokesperson for the school district, said the district plans to use $3.4 million in federal pandemic relief funds to cover existing costs in 2023-24.

“After that, the district has to be prepared to balance its budget without that aid,” he said.

Despite the potential challenges and unknowns from state funding Battle said she is hopeful to present a palpable budget to the school board.

“I hope to submit a structurally sustainable and effective budget in addition to being good stewards of taxpayer dollars,” Battle said.