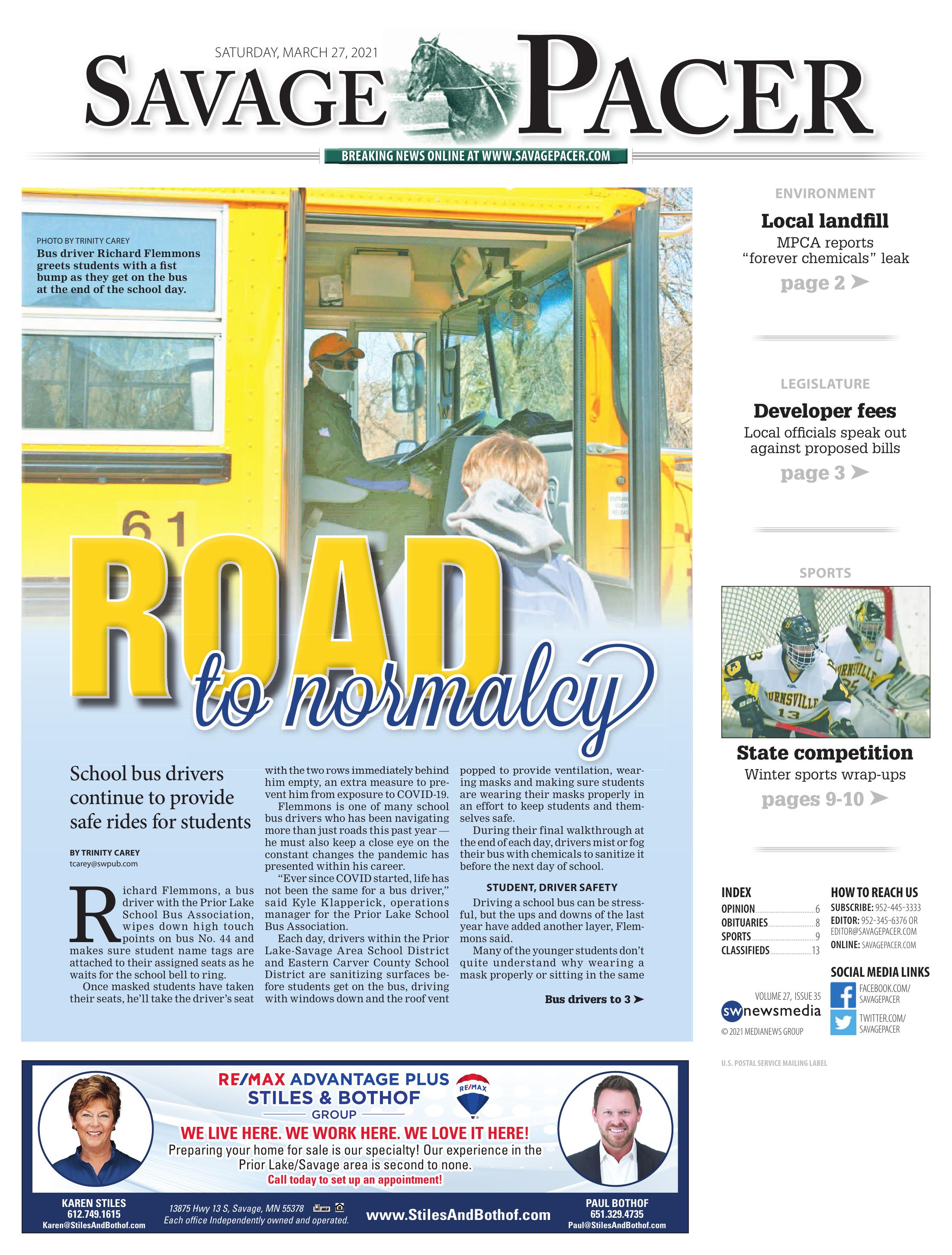 Richard Flemmons sits on his bus at the end of a school day. Bus drivers are wiping down highly touched surfaces, creating air flow in buses, following seating charts and making sure students are wearing their masks properly to ensure student safety on the roads.

Richard Flemmons, bus driver with the Prior Lake School Bus Association, does a walkthrough of his as he waits for the last bell of the day to ring and students to board his bus.

Bus driver Richard Flemmons greets students with a fist bump as they get on the bus at the end of the school day.

Driver with the Prior Lake School Bus Association Richard Flemmons stands outside bus 44.

Bus driver Richard Flemmons waits for students to board his bus at the end of a school day.

Richard Flemmons, a bus driver with the Prior Lake School Bus Association, wipes down high touch points on bus No. 44 and makes sure student name tags are attached to their assigned seats as he waits for the school bell to ring.

Once masked students have taken their seats, he’ll take the driver’s seat with the two rows immediately behind him empty, an extra measure to prevent him from exposure to COVID-19.

Flemmons is one of many school bus drivers who has been navigating more than just roads this past year — he must also keep a close eye on the constant changes the pandemic has presented within his career.

“Ever since COVID started, life has not been the same for a bus driver,” said Kyle Klapperick, operations manager for the Prior Lake School Bus Association.

Each day, drivers within the Prior Lake-Savage Area School District and Eastern Carver County School District are sanitizing surfaces before students get on the bus, driving with windows down and the roof vent popped to provide ventilation, wearing masks and making sure students are wearing their masks properly in an effort to keep students and themselves safe.

During their final walkthrough at the end of each day, drivers mist or fog their bus with chemicals to sanitize it before the next day of school.

Student, driver safetyDriving a school bus can be stressful, but the ups and downs of the last year have added another layer, Flemmons said.

Many of the younger students don’t quite understand why wearing a mask properly or sitting in the same assigned seat is so important, Flemmons said. They ask him why they can’t sit with their friends.

“We’re not mean bus drivers, we want to protect ourselves as well as you and the other students,” he has to explain.

Learning model changes also kept bus drivers on their toes and made it challenging to make a connection with students in the beginning of the school year, he said.

“You get a chance to know their name then you don’t see them for a few days,” Flemmons said. While following the necessary protocols and guidelines to ensure student safety, Flemmons also had concerns for his own health as an older driver approaching age 78.

Like lunch boxes and worksheets, masks sometimes forget to make their way to students’ backpacks and he has to provide them with one when they get on the bus. He prompts younger students to pull their mask over their nose and when kids stop showing up to school for a few days he starts to wonder what happened.

“We don’t know what they’re out for,” Flemmons said. “They said they were sick and I was kind of leery about that.”

So when the district called to say he would have the opportunity to receive the vaccine earlier this year, “it was a big relief,” Flemmons said, adding that full vaccination is another layer of protection between him and the students he transports.

Like teachers and staff, bus drivers within both districts have had the opportunity to receive the vaccine.

“Having that vaccine number one, will hopefully keep our drivers driving and number two, give our drivers a little bit more confidence that they’re going to remain healthy. A number of drivers in the school bus industry are older people who are either semi-retired or retired, so they were a little bit higher risk in the COVID pandemic,” John Thomas, transportation manager for Eastern Carver County Schools and president of Minnesota Association for Pupil Transportation, said. “To get them vaccinated gives them their own personal peace of mind as well as peace of mind for work.”

There hasn’t been any positive cases within the Eastern Carver County School District bus drivers, he added.

but staying busyThrough the initial closing of schools last March and changes between hybrid and distance learning models this academic year, drivers within the Eastern Carver County School District and Prior Lake-Savage Area Schools have continued working.

“For everybody and the drivers are just as included similar to the teachers and students and everybody else, it’s been a new challenge that you’ve never seen before and our drivers here in Eastern Carver County Schools have worked through it well,” Thomas said.

Both transportation companies have assisted in fulfilling district needs while students were learning entirely at a distance. Bus drivers were delivering meals to homes, transporting the students that were still attending school in-person and providing transportation for children in school daycare programs.

When there were days with no work available for drivers, Flemmons employer continued to pay him which he said provided another sense of relief during times of uncertainty.

Many school districts across the nation have dealt with bus drivers seeking different employment and driver shortages during the pandemic.

There haven’t been a lot of applications coming through the door since the start of the pandemic and a couple drivers decided not to come back this year due to the circumstances, but driver retention has been a priority within both transportation companies, Thomas and Klapperick said.

“We’ve been blessed with our drivers and their commitment not only to our county but to the district and helping us put forth the protocols and going out and doing that job day to day,” Klapperick said.

‘Back to the norm’Flemmons said it’s been a joy to see more students in his bus with the switch to hybrid learning, but he’s looking forward to the days where nearly 77 students are once again filling the bus seats.

“I’m hoping eventually the more we protect ourselves, all of us as students and bus drivers, we can get back to the norm,” he said.

That return to normalcy isn’t so far off as secondary students will soon transition back into classrooms four days a week.

“It means allowing the drivers to do what they do best, and that is transport kids to and from school, as safely and efficiently as possible,” Klapperick said. “It takes a very special person to drive a school bus. What COVID did is made us reevaluate our protocols to make sure we’re doing so safely but now that we’re digging out of that, it’s allowing these drivers to get back to what they signed up for and get back with their kids and get back into a normal routine.”

“Ever since COVID started, life has not been the same for a bus driver.” 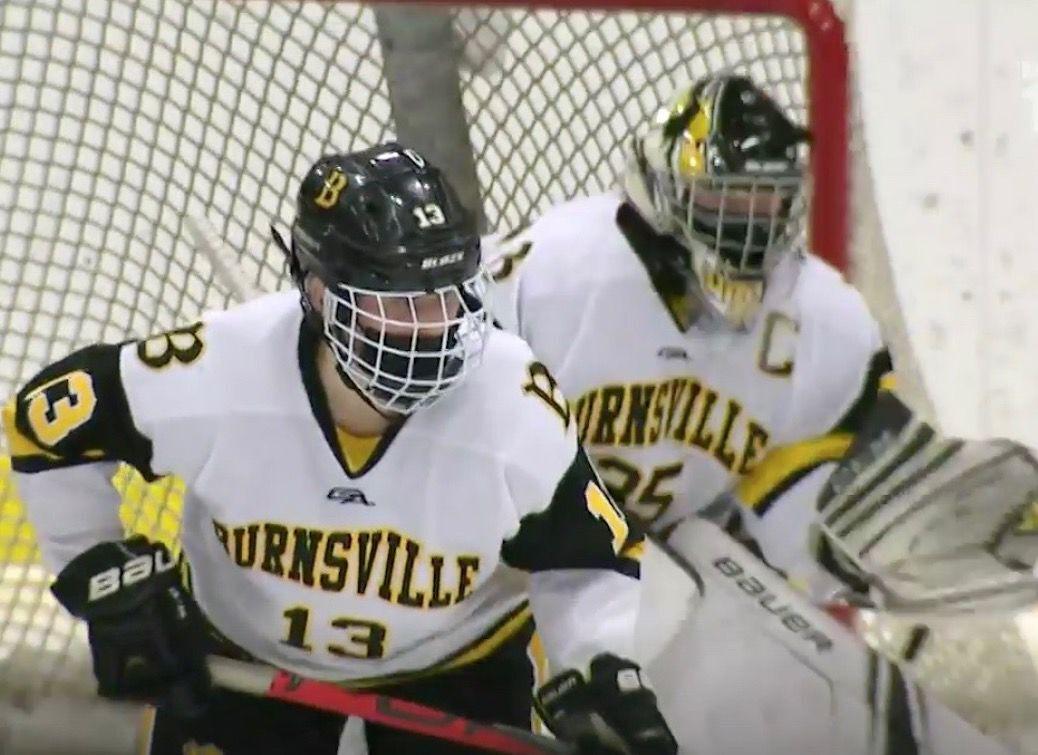