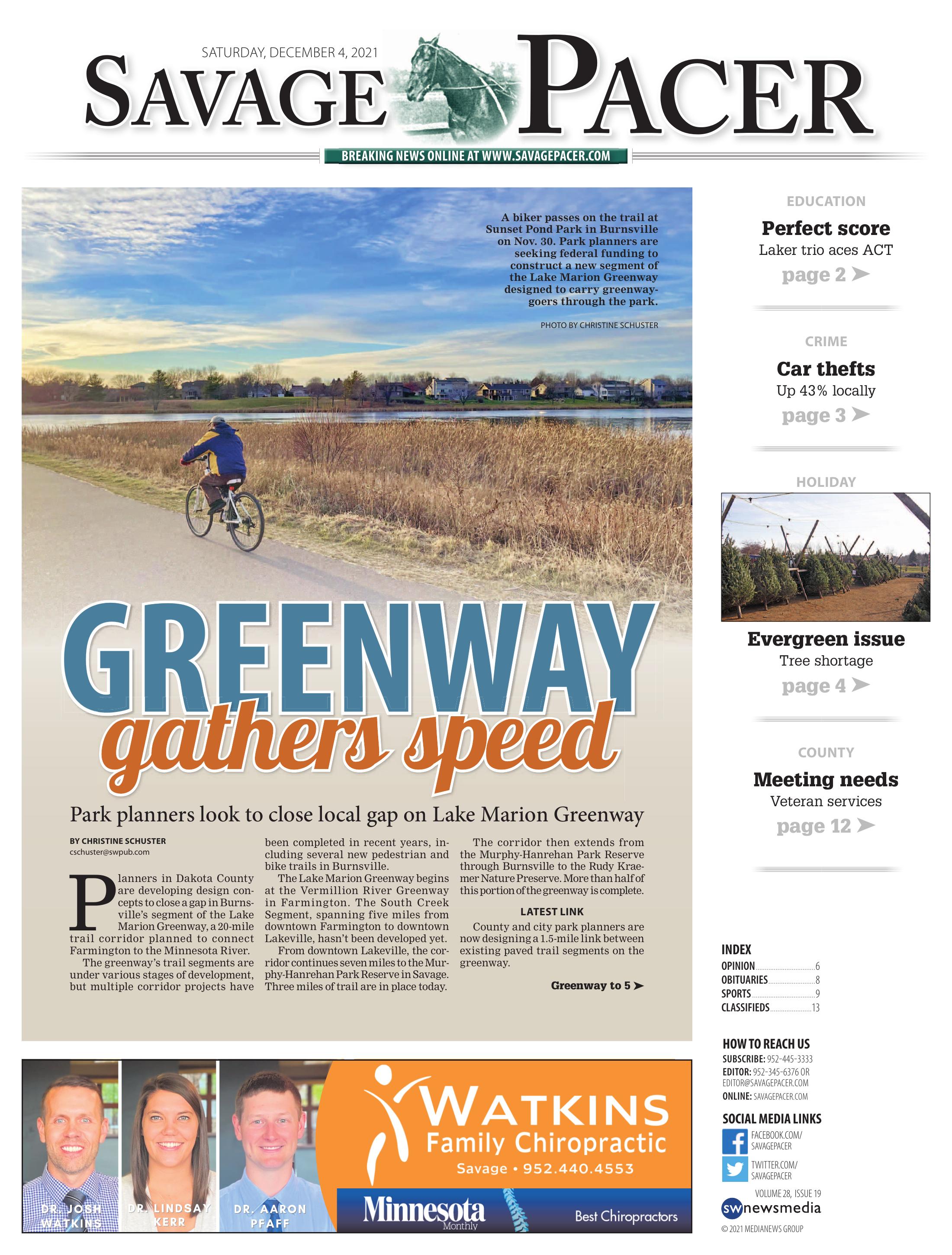 A biker passes on the trail at Sunset Pond Park in Burnsville on Nov. 30. Park planners are seeking federal funding to construct a new segment of the Lake Marion Greenway designed to carry greenway-goers through the park.

Sunset Pond Park in Burnsville is being evaluated for trail enhancements and a bike bypass trail in connection with the regional Lake Marion Greenway project.

A boardwalk at Kelleher Park in Burnsville, completed this year, established a new trail link on the regional Lake Marion Greenway.

Planners in Dakota County are developing design concepts to close a gap in Burnsville’s segment of the Lake Marion Greenway, a 20-mile trail corridor planned to connect Farmington to the Minnesota River.

The greenway’s trail segments are under various stages of development, but multiple corridor projects have been completed in recent years, including several new pedestrian and bike trails in Burnsville.

The Lake Marion Greenway begins at the Vermillion River Greenway in Farmington. The South Creek Segment, spanning five miles from downtown Farmington to downtown Lakeville, hasn’t been developed yet.

From downtown Lakeville, the corridor continues seven miles to the Murphy-Hanrehan Park Reserve in Savage. Three miles of trail are in place today.

The corridor then extends from the Murphy-Hanrehan Park Reserve through Burnsville to the Rudy Kraemer Nature Preserve. More than half of this portion of the greenway is complete.

County and city park planners are now designing a 1.5-mile link between existing paved trail segments on the greenway.

The segment beginning at Williams Drive, called the Rose Bluff Trail, connects Savage and Burnsville near the Rudy Kraemer Nature Preserve — the greenway is planned to eventually extend through northwest Burnsville to the Minnesota River.

A bypass for bikes

The sprawling Sunset Pond Park, overlooked by nearby homes, is already a hub for trail recreation, with a paved trail surrounding the 65-acre Sunset Pond and prairie restoration area.

The project team originally imagined a dual trail on the east side of the park to separate bikers from walkers and carry greenway-users to the north edge of the park.

However, according to city documents, public feedback gathered this fall indicated residents favored keeping one trail, softening some of the curves, widening it out and striping it to delineate bike lanes and walking areas.

Kirsten Gray, a consultant with WSB, is leading community engagement efforts for the project.

Gray said surveys show residents want regional connectivity on the trail system, however, minimizing disruptions to the natural area and safety for walkers are top concerns for this particular project.

Peterson said the route would utilize the existing shoulder on Judicial Road and offer bikers an alternative to the heavily-used, multi-use trail along Sunset Pond.

The bypass route would require at-grade crossing over the Canadian Pacific railroad track, but Peterson said the company has responded positively to the project team’s inquiries so far.

The Burnsville City Council is set to review the plans at a work session on Jan. 11. Additional open houses for public feedback are expected in February and March ahead of a grant application to be submitted in April.

Today, around one-third of the Lake Marion Greenway corridor has a paved trail in place, according to Mertens.

A new link opened at Kelleher Park this year. The trail features an expansive boardwalk to cross over a wetland and ties into bike lanes and a sidewalk in Savage.

With the new boardwalk in place, the City of Burnsville is also planning amenity upgrades and new safety features at Kelleher Park.

“The Lake Marion Greenway is going to provide tremendous opportunity for residents of Savage to be able to connect to a destination of their choice,” he said.

A paved underpass at County Road 42 connects Rose Park and Sunset Pond Park, and grade-separated crossings are being evaluated for Highway 13 in connection with upcoming, large-scale road improvements.

The final stop for the Lake Marion Greenway is eventually planned for the northwest quadrant of Burnsville.

Today, the quadrant along the Minnesota River is occupied by a closed landfill marked for clean-up and a limestone mining operation — both are set to be transformed by redevelopment in the city’s long-term vision for the riverfront area.

And while the Lake Marion Greenway ends there, other greenway projects under development could carry greenway-goers further.

In Eagan, two projects are being designed to complete a 12-mile segment of the Minnesota River Greenway from St. Paul to Interstate-35W in Burnsville. 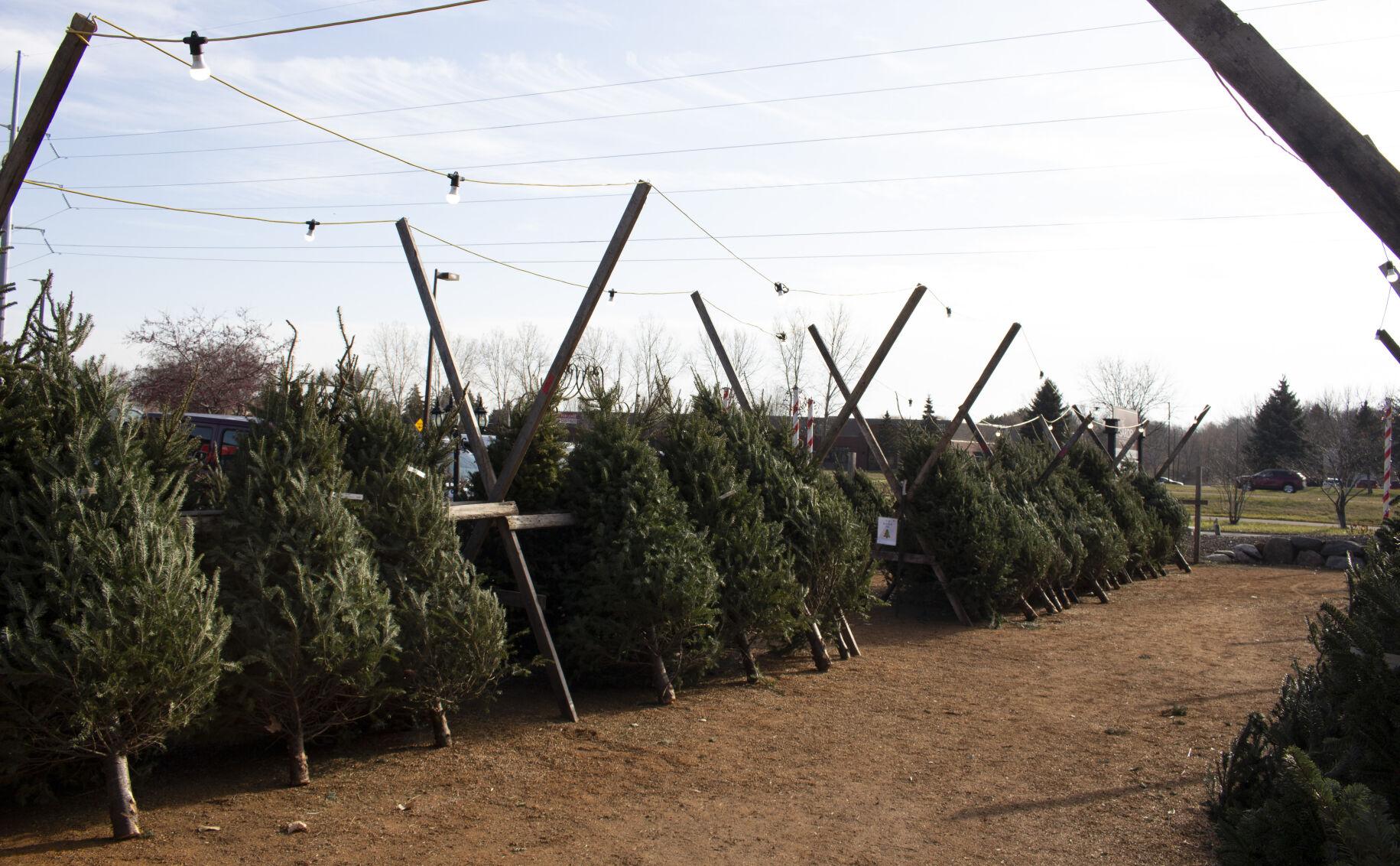