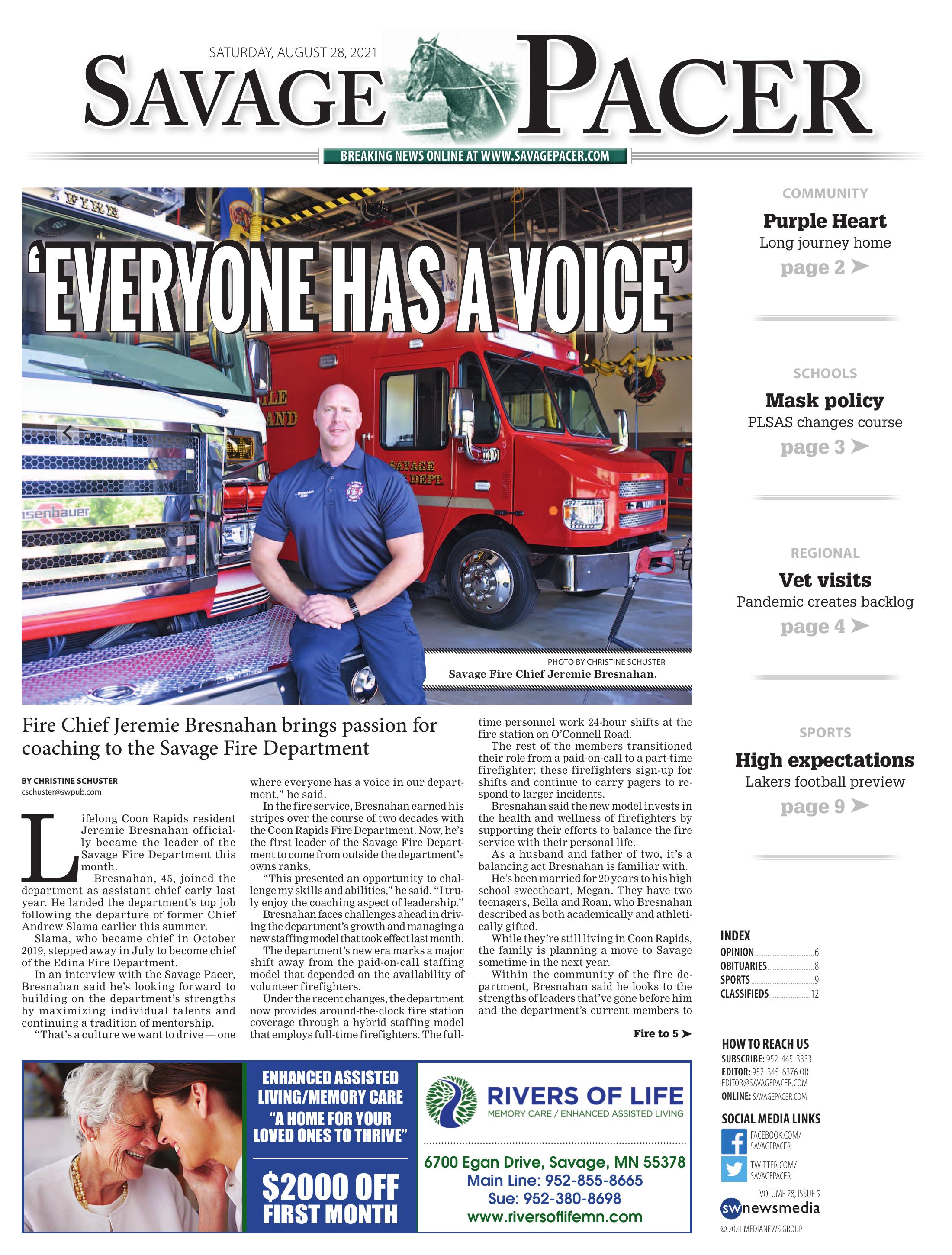 Slama, who became chief in October 2019, stepped away in July to become chief of the Edina Fire Department.

In an interview with the Savage Pacer, Bresnahan said he’s looking forward to building on the department’s strengths by maximizing individual talents and continuing a tradition of mentorship.

“That’s a culture we want to drive — one where everyone has a voice in our department,” he said.

In the fire service, Bresnahan earned his stripes over the course of two decades with the Coon Rapids Fire Department. Now, he’s the first leader of the Savage Fire Department to come from outside the department’s owns ranks.

“This presented an opportunity to challenge my skills and abilities,” he said. “I truly enjoy the coaching aspect of leadership.”

Bresnahan faces challenges ahead in driving the department’s growth and managing a new staffing model that took effect last month.

The department’s new era marks a major shift away from the paid-on-call staffing model that depended on the availability of volunteer firefighters.

The rest of the members transitioned their role from a paid-on-call to a part-time firefighter; these firefighters sign-up for shifts and continue to carry pagers to respond to larger incidents.

Bresnahan said the new model invests in the health and wellness of firefighters by supporting their efforts to balance the fire service with their personal life.

As a husband and father of two, it’s a balancing act Bresnahan is familiar with.

He’s been married for 20 years to his high school sweetheart, Megan. They have two teenagers, Bella and Roan, who Bresnahan described as both academically and athletically gifted.

While they’re still living in Coon Rapids, the family is planning a move to Savage sometime in the next year.

Within the community of the fire department, Bresnahan said he looks to the strengths of leaders that’ve gone before him and the department’s current members to navigate the path forward.

“I think every person in our department looks at the department through their own lens,” he said. “With that though, we always have blind spots.”

Additional training, guided by an internal training committee, is one of the ways Bresnahan said they’re working to invest in department members and develop the next generation of leadership from within.

Department members have also taken up additional tasks and focus areas based on their personal skills and interests, whether it be mechanics or public engagement.

“The interest our staff has in growth is second to none,” he said. “There’s nothing they aren’t willing to try or look into.”

Hometown: I spent the first part of my life, through grade school, in Southern California. Middle school and high school were spent in various locations in Oregon, I went to college in North Dakota and have now lived in Savage since 2007. I have lived longer in Savage than any other location, so I like to call it my hometown.

Years in the fire service: 9 years.

What led you to pursue a career with the Savage Fire Department: I grew up in team sports. Once I was done with school and started a career, I realized something was missing. I wanted to be a part of a team again; I have also always enjoyed helping people. There was no better way to fulfill those desires and serve my community than joining Savage Fire. Now it has also allowed me to make a full-time career doing what I love.

Years in the fire service: 13 years

What led you to pursue a career with the Savage Fire Department: The Savage Fire Department has always been a strong paid-on call department. When Savage was hiring full-time firefighters, I applied for the fire captain position because I really wanted to be part of this exciting transition into a strong combination department. Savage is an outstanding city and I’m grateful for the opportunity to serve this community.

Years in the fire service: Just over 6 years

What led you to pursue a career with the Savage Fire Department: I had the opportunity to apply, so I gave it a shot. And, I instantly fell in love with the fire service. I wouldn’t change it for the world.

Years in the fire service: 6

What led you to pursue a career with the Savage Fire Department: I’ve always enjoyed the job. Every day presents new opportunities to help the community and make someone’s bad day, a little better. Savage is a growing city and I’m excited to be a part of that growth and serve this amazing community anyway I can!

Hometown: I was born in Hibbing, MN and lived there until 1993 when my family moved to Savage. I have been here ever since.

What led you to pursue a career with the Savage Fire Department: What led me to want to become a firefighter was the want to help people in need. I also wanted to become part of something that gave back to the city I love. I have made a second family here and built bonds and memories that will last forever.

What led you to pursue a career with Savage Fire Department: My part-time work with SFD and my previous job working as an EMT. I enjoy both the EMS side and the firefighting side, so what better way to combine them both into a career which I love and get to continue to work in this great community here in Savage.