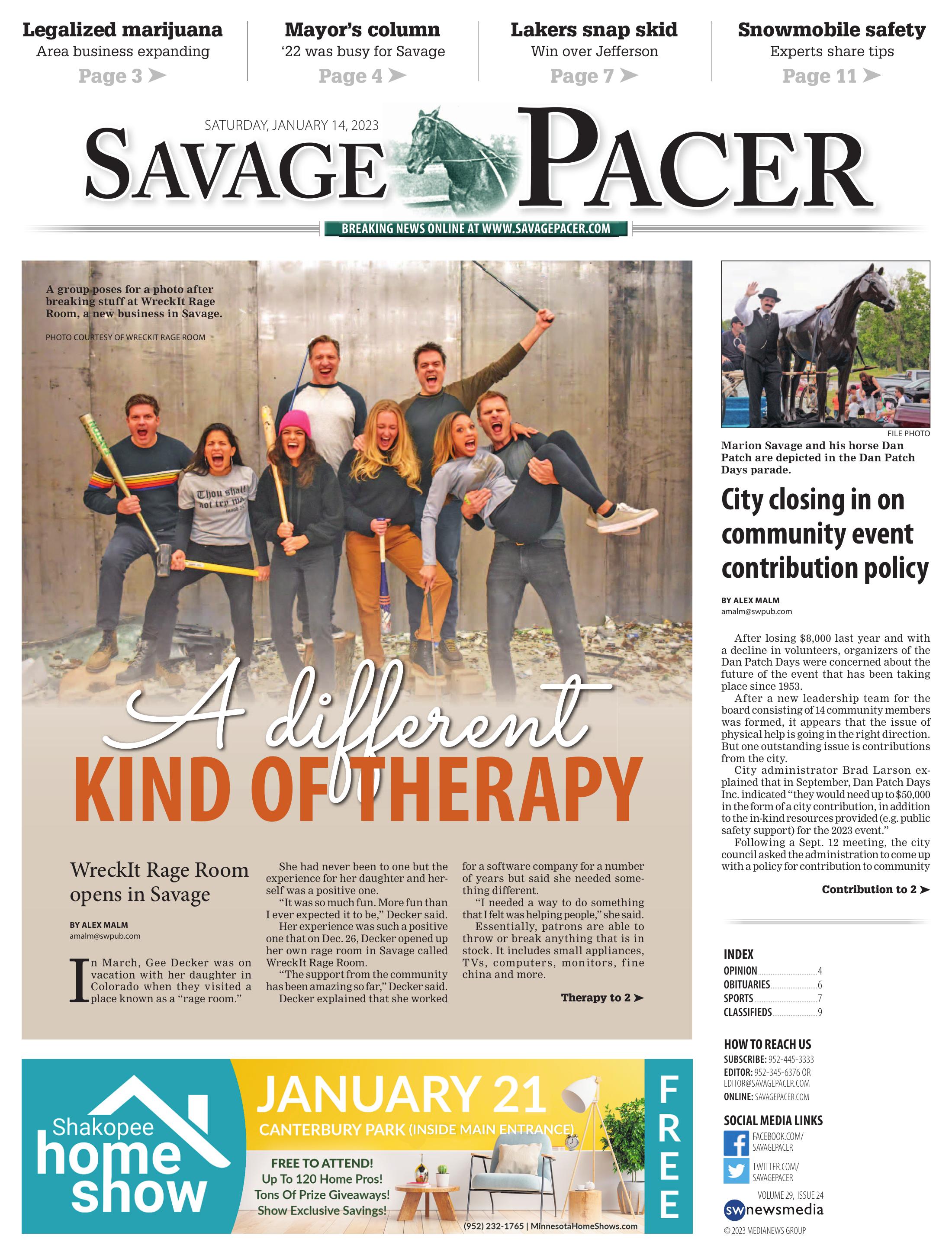 In March, Gee Decker was on vacation with her daughter in Colorado when they visited a place known as a “rage room.”

She had never been to one but the experience for her daughter and herself was a positive one.

“It was so much fun. More fun than I ever expected it to be,” Decker said.

Her experience was such a positive one that on Dec. 26, Decker opened up her own rage room in Savage called WreckIt Rage Room.

“The support from the community has been amazing so far,” Decker said.

Decker explained that she worked for a software company for a number of years but said she needed something different.

“I needed a way to do something that I felt was helping people,” she said.

Essentially, patrons are able to throw or break anything that is in stock. It includes small appliances, TVs, computers, monitors, fine china and more.

The banner inside the building reads “cheaper and way more fun than therapy.”

Decker said that it’s a different kind of therapy.

“You have a great time, you get rid of some stress, some anger, or you truly go just to have fun doing something that is taboo,” Decker said.

A Savage resident, Decker drove past the location of her business near the border of Burnsville and Savage on County Road 42 and immediately knew it was the perfect location.

“I like to say the universe spoke and I listened,” Decker said. “There wasn’t going to be a location close to where I live for this type of business.”

After meeting with the owner of the building, she made the decision to move forward.

Although she has the one location for now, Decker said she hopes to expand.

“I hope we are able to have multiple locations at some point,” she said.

New to the world of business, Decker said she has been relying on different connections to see what has worked and hasn’t for small businesses and is learning as she goes.

“It’s all just a huge learning curve me,” Decker said.

On Jan. 26, she said there will be a grand opening event at 3 p.m. which will also double as Decker’s birthday celebration.

Marion Savage and his horse Dan Patch are depicted in the Dan Patch Days parade.

The city council could be taking a vote on a policy related to city contributions to community events as soon as next week.

After losing $8,000 last year and with a decline in volunteers, organizers of the Dan Patch Days were concerned about the future of the event that has been taking place since 1953.

After a new leadership team for the board consisting of 14 community members was formed, it appears that the issue of physical help is going in the right direction. But one outstanding issue is contributions from the city.

City administrator Brad Larson explained that in September, Dan Patch Days Inc. indicated “they would need up to $50,000 in the form of a city contribution, in addition to the in-kind resources provided (e.g. public safety support) for the 2023 event.”

Following a Sept. 12 meeting, the city council asked the administration to come up with a policy for contribution to community festivals. That proposal was discussed during a council work session on Monday, Jan. 9.

“The policy establishes criteria for what qualifies as a community festival and structures the City’s participation,” Larson said in a memo.

He explained that two state statutes allow for cities to provide for free music events and fireworks displays. Larson added that direct city contributions would need to be related to these programs.

In addition, the city and the event organizers need to enter into a written agreement that would be approved by the city council to address the requested resources.

Larson noted that if the city council decides to adopt the policy, then revenue generated by the municipally-owned liquor stores could be used to support designated community festivals.

When asked if there are other community events that may qualify for funding under the policy, Larson said “right now, there are no other events that would qualify, but the policy is written to be open to any organizations that meet the criteria.”

Following the Jan. 9 work session, Larson said the council indicated a desire to move forward but asked that language regarding matching contributions, as well as a cap for city contributions.

Asked what the cap would be or how the matching contributions would work, Larson said in an email specifics have not yet been worked out.

Larson said the hope is to have a formal policy voted on during the Jan. 17 city council meeting.