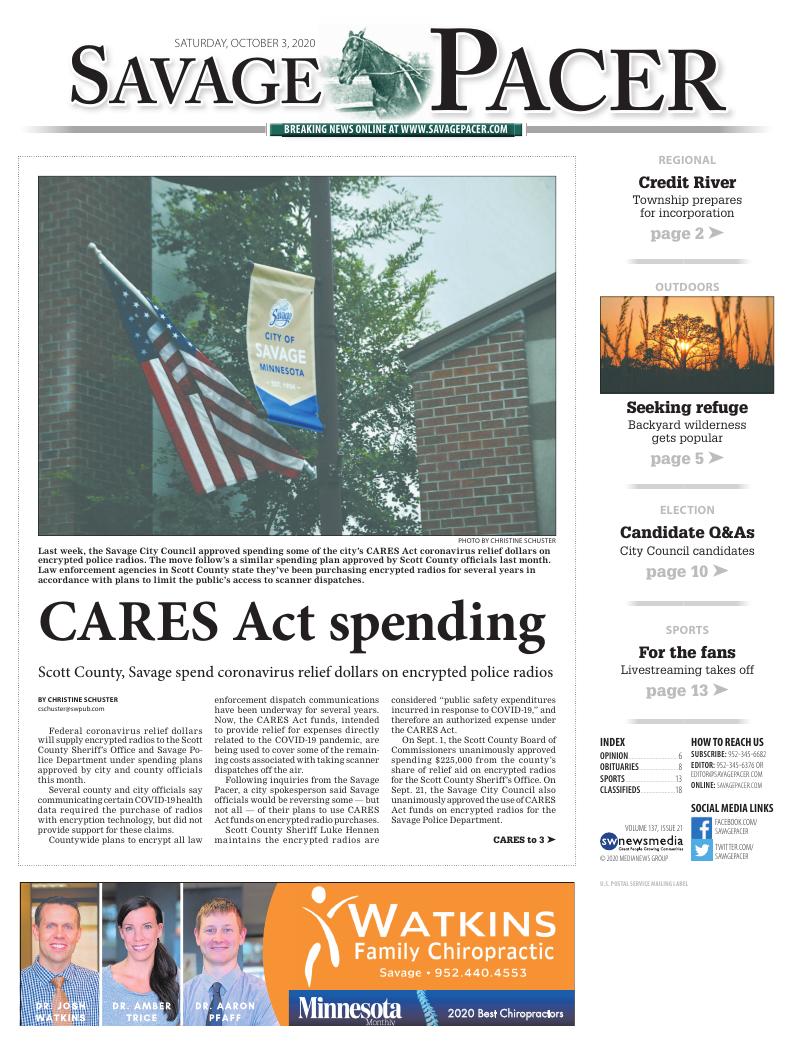 Several county and city officials say communicating certain COVID-19 health data required the purchase of radios with encryption technology, but did not provide support for these claims.

Countywide plans to encrypt all law enforcement dispatch communications have been underway for several years. Now, the CARES Act funds, intended to provide relief for expenses directly related to the COVID-19 pandemic, are being used to cover some of the remaining costs associated with taking scanner dispatches off the air.

Following inquiries from the Savage Pacer, a city spokesperson said Savage officials would be reversing some — but not all — of their plans to use CARES Act funds on encrypted radio purchases.

On Sept. 1, the Scott County Board of Commissioners unanimously approved spending $225,000 from the county's share of relief aid on encrypted radios for the Scott County Sheriff's Office. On Monday, the Savage City Council also unanimously approved the use of CARES Act funds on encrypted radios for the Savage Police Department.

The agenda memo requesting the county board's vote said, “The Department of Health has classified that COVID-19 health data may only be transmitted over encrypted radios in order to be in compliance with Governor Walz executive order 20-34. This prevents the 911 Communications Center from notifying officers before they enter a location with confirmed COVID-19."

In an email to the Savage Pacer, Hennen said using other private methods of communication, such as telephone or computer messaging, are cumbersome, inefficient and may be unsafe while driving to emergencies.

“The Governor’s Executive Order and subsequent direction from the Minnesota Department of Health references to encrypted radios provided a nexus to apply the Federal CARES funding to this project,” Hennen wrote.

The Savage Pacer could not verify the presence of any references to encrypted radios in the executive order or subsequent guidance.

Local law enforcement officials have previously said the decision to encrypt police radio traffic had been made in the interest of safety and victim privacy. Once the change occurs, the public will no longer be able to listen to scanner dispatches.

The order enabled officers to take precautions when responding to an address where COVID-19 might be present by permitting the health department to share addresses associated with COVID-19 cases with law enforcement.

"Shared data must not include identifying information beyond the address," the order states.

The Minnesota Department of Public Safety later published guidance on how law enforcement should handle the private data.

According to the guidance, obtained by the newspaper via the Scott County Sheriff's Office, dispatchers can send the COVID-19 alert over the officer's in-squad laptop, by phone or via radio only when the previously listed methods aren't available.

Dispatchers are able to verbally notify officers when they’ve sent additional information related to the address officers are responding to. With the health department data, the officer would click on the notification and be shown a brief, standardized COVID-19 alert message.

The executive order requires the data be transmitted only to the minimum number of people necessary to accomplish the order's purpose. Because there is no mention of using encrypted radios, it’s unclear if communicating the address alert to all officers within the county over the encrypted radio system would comply.

Savage City Administrator Brad Larson and Savage Police Chief Rodney Seurer both responded to emailed questions about the purchase with extracts from the county memo, which incorrectly claimed the health data "may only be transmitted over encrypted radios."

When questioned on inaccuracies, Seurer sent a copy of the executive order.

In April, a few days before the state order, the Savage City Council approved the purchase of six encrypted radios. These radios, which were reportedly planned for in the city’s Capital Improvement Plan, were said to be the last the police department needed to encrypt communications as part of Scott County’s long-term plans.

“We have been upgrading our mobile portable radios over the past three years and have 6 portable radios remaining that are in need of replacement,” Seurer wrote in the Council's memo.

Afterward, Emily Gunderson, Savage's communications manager, said radios totaling $25,587 will now be paid for from the city's Capital Improvement Plan equipment fund as the council approved in April, but additional radios will still be purchased with CARES Act dollars.

“The need to purchase the encrypted radio comes from the Governor’s Emergency Executive Order 20-34 which states that shared health data must remain confidential and be encrypted in transit,” Gunderson wrote. “The shared data must not be disseminated over any channel of communication that could be actively monitored by the public or uninvolved parties. This is for the safety of our police officers and the protection of our residents’ privacy.”

The Capital Improvement Plan provides long-range plans for improvement projects and equipment purchases in order to spread expenses out over time and avoid large budget and tax fluctuations.

Withdrawing the radio purchase requests from the county's Capital Improvement Plan will lead to roughly $204,000 in “future cost reduction” in 2021 and 2022, the Sheriff’s Office wrote in a memo to commissioners.

In an email to the newspaper, Hennen highlighted money saved from future years of tax levy funding.

“In my role as an elected official, I take pride in providing public safety with as minimal impact on the taxpayers as possible,” he said. “As the County Sheriff, I have a responsibility to the safety of our police officers and deputies and I strongly support this project.”

Savage received around $2.36 million in federal assistance through the program this summer, and Scott County received approximately $17.7 million.

The federal guidelines allow for the recipients to establish grant programs to support businesses and nonprofit organizations. Local governments seeking reimbursement for pandemic-related expenses ease pressure on governmental budgets, but reduce the funds available for such programs.

According to the U.S. Department of the Treasury, the CARES Act requires that the payments from the Coronavirus Relief Fund only be used to cover expenses that are necessary expenditures related to COVID-19, were not accounted for in the budget most recently approved as of March 27 and were incurred between March 1 and Dec. 30.

At a work session on Sept. 14, Savage officials discussed how they’d spend the rest of the city’s CARES Act dollars ahead of their formal vote on the plans the following Monday.

During the worksession, Julie Stahl, the city’s finance director, told officials they needed to be careful about capital expenditures because federal guidelines warn the money should generally not be used on capital improvement projects.

In Savage, officials approved the use of CARES Act funds to renovate one of the city's fire stations in preparation of transitioning to a full-time fire department next year, which officials say relates directly to the pandemic.

Savage Fire Chief Andrew Slama told the Council it would “definitely be a no-no” to upgrade the fire department’s living quarters if the department already had full-time firefighters before the pandemic hit. However, they began staffing the stations in March in response to the public health crisis, and hadn’t planned for the station improvements needed to accomodate full-time staff before the pandemic.

During the work session and subsequent meeting, officials didn’t discuss the purchase of new police radio equipment, although the plans were noted in the meeting materials.

Encrypted with or without COVID-19

Jason Wedel, Prior Lake's city manager, confirmed Prior Lake officials had previously budgeted for the encryption equipment and did not look to cover costs with federal relief dollars.

Shakopee city officials also said they had not spent the money on their encryption plan.

"I do not see how radios would fall under the CARES Act," Shakopee City Administrator Bill Reynolds said in an email. "They do not fall under the requirements as I read them."

Jordan City Administrator Tom Nikunen said Jordan officials were exploring the option of buying a few encrypted radios with their relief dollars since the county had received approval.

In interviews, some Scott County Commissioners said they supported the purchase because it had been planned for a long time anyways, and buying the radios allows law enforcement to utilize the equipment in their response to COVID-19.

Scott County Commissioner Barb Weckmann Brekke said the CARES Act funds allowed them to purchase the “last batch” of radios in hopes of encrypting all communications within three to four months.

Haas said he isn't exactly sure when they'll be ready to use the encrypted radios — that's because every law enforcement agency in the county must have their equipment ready to go before they all make the switch over.

Haas said it’s unknown how much the use of CARES Act money will expedite their plans.

When asked about his vote on the radio purchase, Commissioner John Ulrich initially cited the executive order.

“It certainly says information must be encrypted in transit,” he said, referencing executive order language that doesn’t specifically relate to radio communication.

Ulrich later said he supported the purchase because they were planning to buy the equipment anyways, and the Sheriff’s Office wanted to be able to use the radios to transmit COVID-19 related information.

Commissioner Dave Beer said he isn’t aware of exactly how the purchase might check the boxes required to use CARES Act funds, but he’s confident it meets the requirements because of his trust in county staff.

Beer said he supported the purchase because the radios had been on the books for a long time.

He said the money allows the county to “pre-buy” equipment they’d planned to buy anyways, which results in a tax break for residents because the “pre-budgeted” cost of radios is eliminated.

“We absolutely believe we are doing it correctly, doing it appropriately and doing it in a way that gives county citizens a win-win,” he said.

“The Governor’s Executive Order and subsequent direction from the Minnesota Department of Health references to encrypted radios provided a nexus to apply the Federal CARES funding to this project.”

The sun sets over the oak savanna at the Louisville Swamp Unit near Jordan in the Minnesota Valley National Wildlife Refuge. 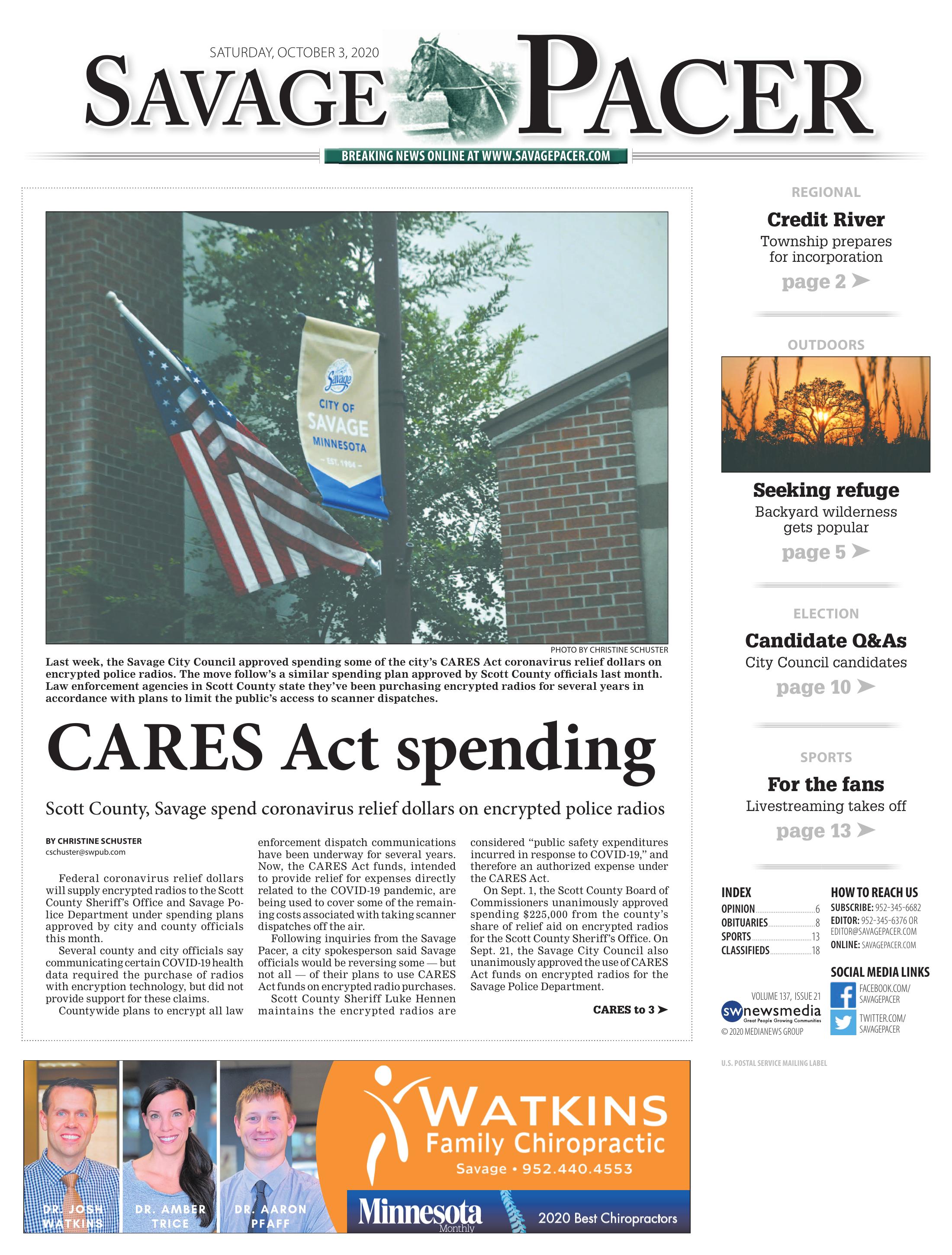