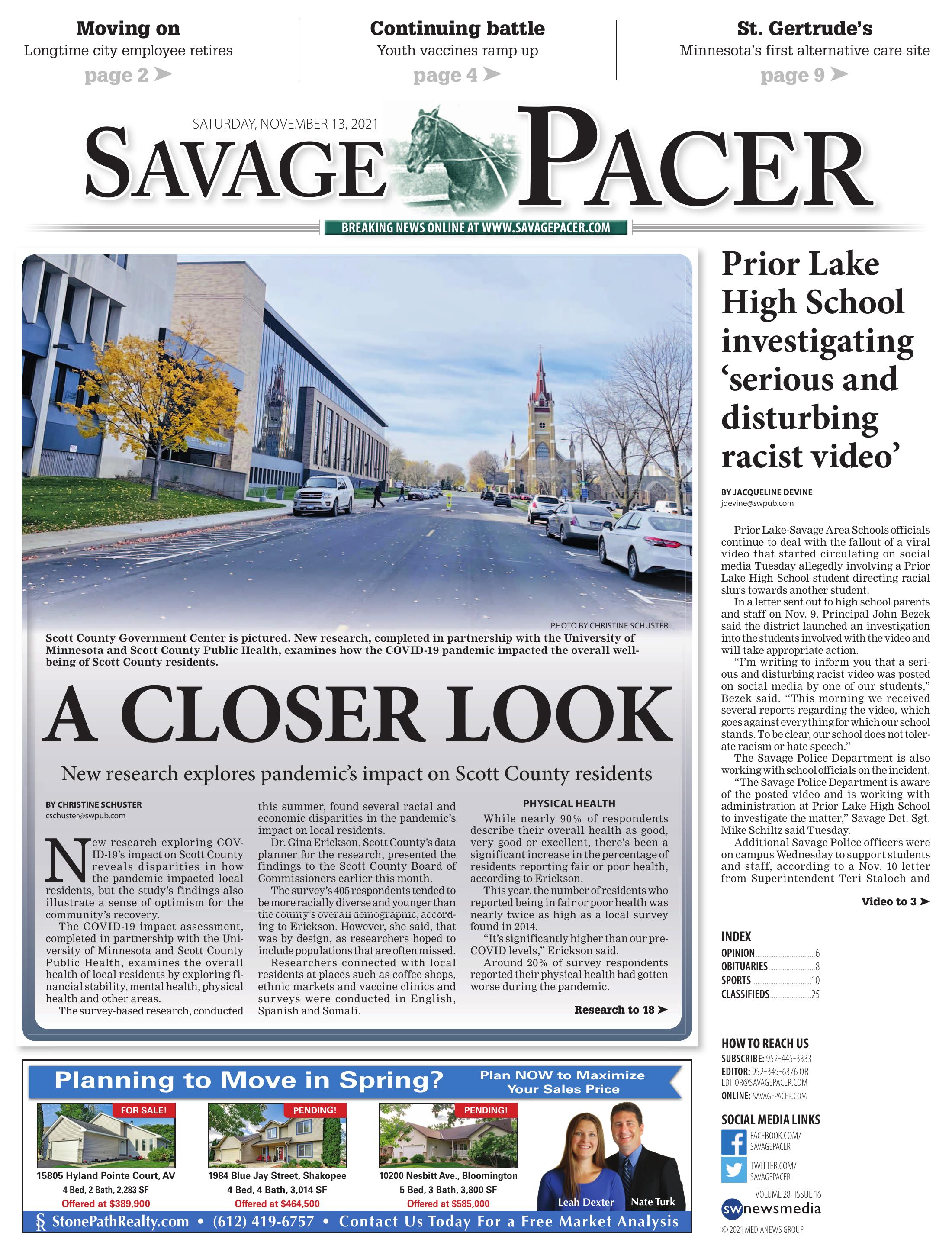 New research exploring COVID-19’s impact on Scott County reveals disparities in how the pandemic impacted local residents, but the study’s findings also illustrate a sense of optimism for the community’s recovery.

The COVID-19 impact assessment, completed in partnership with the University of Minnesota and Scott County Public Health, examines the overall health of local residents by exploring financial stability, mental health, physical health and other areas.

The survey-based research, conducted this summer, found several racial and economic disparities in the pandemic’s impact on local residents.

Dr. Gina Erickson, Scott County’s data planner for the research, presented the findings to the Scott County Board of Commissioners earlier this month.

The survey’s 405 respondents tended to be more racially diverse and younger than the county’s overall demographic, according to Erickson. However, she said, that was by design, as researchers hoped to include populations that are often missed.

Researchers connected with local residents at places such as coffee shops, ethnic markets and vaccine clinics and surveys were conducted in English, Spanish and Somali.

While nearly 90% of respondents describe their overall health as good, very good or excellent, there’s been a significant increase in the percentage of residents reporting fair or poor health, according to Erickson.

This year, the number of residents who reported being in fair or poor health was nearly twice as high as a local survey found in 2014.

Around 20% of survey respondents reported their physical health had gotten worse during the pandemic.

“For those who were already in poor or fair health, they were more likely to report the declines in health over the course of the pandemic,” Erickson said.

One contributing factor may be delays in seeking medical care during the pandemic.

More than a quarter of respondents reported delaying or foregoing dental care and around 19% reported impacts to their preventative or medical care.

Around 11% of respondents reported delaying or foregoing mental health care, and these respondents were more likely to cite access issues than concerns over the virus itself.

Of respondents who had COVID-19, around 15% reported dealing with a new health issue after the virus.

Around 19% of survey respondents reported their mental health had worsened due to the pandemic.

Of these respondents, 1 in 7 reported a depressed mood and more than 1 in 10 reported they’d considered self-harm or suicide during the last year.

“These are concerning numbers for us,” Erickson said.

The survey found that those reporting “other” as their race — including Asian American, Native American and Native Hawaiian populations — were more likely to report they’d seriously considered self-harm or suicide compared to white, Black and Hispanic respondents.

The survey also found differences based on income.

Findings showed respondents earning $50,000 or less were more likely to have considered self-harm or suicide than respondents at higher income levels.

Of all survey respondents who reported increasing their substance use during the pandemic, more than 60% attributed the increase to stress.

“Substance use is increasing largely because of stress-related or other mental health-related reasons,” Erickson said, adding men were more than twice as likely as women to increase substance use.

In addition to increased substance use, the study found men were more likely than women to report negative impacts to their social well-being, including lost connections with family and neighbors.

Medical bills and rent or mortgage payments were among respondents’ top financial concerns.

“Like with other areas here, we see that disparities were worse for those with lower incomes,” Erickson said.

Nearly half of respondents who reported a negative impact on their financial situation cited job loss.

Around 6% of respondents attributed the impact on their financial situation to COVID-19, whether it was due to recovering from the virus or caring for someone with the virus.

More of half of survey respondents who reported having a child, or are expecting, said they are concerned their child is falling behind on reading.

Adequate childhood nutrition and access to childcare were also top concerns among parents.

Despite the pandemic’s impact on well-being, the survey found most Scott County residents feel hopeful about the future.

Around 75-85% of people said they agreed or strongly agreed that they can count on their community to fully recover.

Prior Lake-Savage Area Schools officials continue to deal with the fallout of a viral video that started circulating on social media Tuesday allegedly involving a Prior Lake High School student directing racial slurs towards another student.

In a letter sent out to high school parents and staff on Nov. 9, Principal John Bezek said the district launched an investigation into the students involved with the video and will take appropriate action.

“I’m writing to inform you that a serious and disturbing racist video was posted on social media by one of our students,” Bezek said. “This morning we received several reports regarding the video, which goes against everything for which our school stands. To be clear, our school does not tolerate racism or hate speech.”

The Savage Police Department is also working with school officials on the incident.

“The Savage Police Department is aware of the posted video and is working with administration at Prior Lake High School to investigate the matter,” Savage Det. Sgt. Mike Schiltz said Tuesday.

Additional Savage Police officers were on campus Wednesday to support students and staff, according to a Nov. 10 letter from Superintendent Teri Staloch and Principal John Bezek.

A protest was held Thursday afternoon outside Prior Lake High School, but details were not available at press time. High school students were dismissed from class around 12:45 p.m. on Thursday.

Prior Lake Mayor Kirt Briggs released a statement Thursday afternoon, denouncing racism and stating that the community has important work ahead.

“The video does not reflect the values of our Prior Lake community. And yet, we must acknowledge that it originated here, and that there is still important work that needs to be done,” Briggs said. “We need to advance open conversations on racism to better understand one another and our experiences. This is the only way to create a path forward to strengthen and unite us.”

During a press conference Thursday afternoon, Superintendent Staloch declined to comment on the enrollment status of the students involved in the incident, citing the pending investigation.

“I understand the desire for consequences and (to know) what happened to the person — and that will come out,” Staloch said at the conference.

In the Nov. 10 letter, Staloch and Bezek said PLHS counselors, staff and administrators “continued to create extra space” for students to talk about the video.

“In various forums, we discussed ways in which we as a learning community can respectfully listen to one another, create safe spaces and heal moving forward,” Staloch said. “Our immediate concern is the health and well-being of our students. We take the ramifications of the video very seriously and know there is much we can continue to do in the days, weeks and months ahead to ensure we are making our school a safe and respectful place.”

The Shakopee Mdewakanton Sioux Community issued a statement on Facebook Wednesday, saying that the video involved “a minor in our Community using racist and harmful language.”

“The SMSC fully condemns these comments,” the statement read.

“As a tribal nation, we are acutely aware of the destructive nature of racist thoughts and acts,” the SMSC stated. “Our ancestors suffered from racist and genocidal government policies and acts for over two hundred years. We are still subjected to anti-Indian racism today. We are talking with our youth about our history and the genuine harm racist beliefs and comments cause.”

Threats against the safety of SMSC members are being investigated by the Prior Lake Police Department, according to the SMSC statement.

“Some members in our Community have been incorrectly identified as being immediate family members of the minor in this video,” the SMSC wrote. “They have received significant threats against their safety. These threats and perpetuation of hate must stop.”

When addressing the incident Tuesday, Superintendent Staloch stating that the school will remain focused on providing a safe, supportive and inclusive learning environments for all students.

“This is something that impacts all of us in the community and we recognize the pain and hurt that is a result,” stated Staloch. “Please know that we will continue our work, and welcome your partnership, to ensure that all students feel safe, respected and loved in our schools.”

According to the Nov. 10 letter, the investigation of the students’ action remain underway and the Savage Police Department is currently working with school administrators on the matter.

Due to data privacy, the district said, additional details of the investigation are not available.

A GoFundMe, which was widely shared by civil rights activist and journalist Shaun King, has currently raised over $75,000.