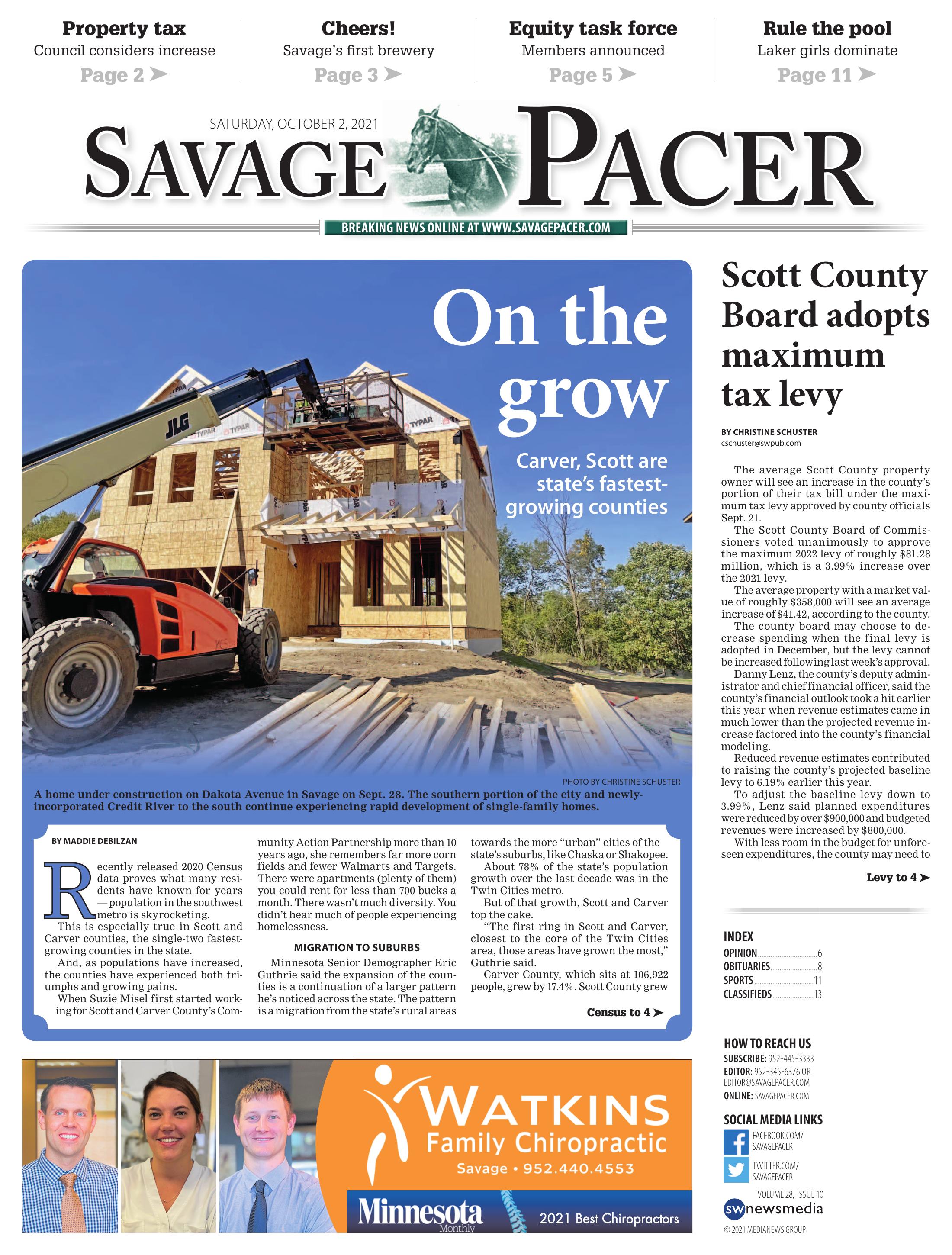 A home under construction on Dakota Avenue in Savage on Sept. 28. The southern portion of the city and newly-incorporated Credit River to the south continue experiencing rapid development of single-family homes.

Recently released 2020 Census data proves what many residents have known for years — population in the southwest metro is skyrocketing.

This is especially true in Scott and Carver counties, the single-two fastest-growing counties in the state.

And, as populations have increased, the counties have experienced both triumphs and growing pains.

When Suzie Misel first started working for Scott and Carver County’s Community Action Partnership more than 10 years ago, she remembers far more corn fields and fewer Walmarts and Targets. There were apartments (plenty of them) you could rent for less than 700 bucks a month. There wasn’t much diversity. You didn’t hear much of people experiencing homelessness.

Minnesota Senior Demographer Eric Guthrie said the expansion of the counties is a continuation of a larger pattern he’s noticed across the state. The pattern is a migration from the state’s rural areas towards the more “urban” cities of the state’s suburbs, like Chaska or Shakopee.

About 78% of the state’s population growth over the last decade was in the Twin Cities metro.

But of that growth, Scott and Carver top the cake.

“The first ring in Scott and Carver, closest to the core of the Twin Cities area, those areas have grown the most,” Guthrie said.

That didn’t surprise Minnesota Senior Demographer Eric Guthrie, who said the majority of that growth occurs in the most densely-populated areas of the state, like St. Paul and Minneapolis.

“Proximity to (the cities) is why we’re seeing the increases in diversity to begin with,” Guthrie said.

Scott and Carver County officials have long anticipated the migration towards the suburbs.

A 90-page housing blueprint created by the Scott County Association for Leadership and Efficiency, or SCALE, gives Scott County residents options for safe, stable and affordable homes. The blueprint outlines the organization’s top three goals for the future of Scott County’s housing: the preservation of housing stock, a balanced supply of housing options and accessible community design in residential developments.

Fred Corrigan, co-chair of the Housing Committee for Scott County’s Live, Learn, Earn initiative within SCALE, told the newspaper earlier this summer that housing, specifically for seniors, has become an increasing concern for the area.

In Scott County, for example, 17% of residents are renters, according to the housing blueprint. The average household income of those renters decreased by 1%, while their rent prices increased by 21%.

“There are all kinds of problems that can arise (when populations grow like this),” Guthrie said. “School capacity, access to transportation, housing.”

A growing population means growing needs. Misel, who has spent the past 10 years trying to figure out how to manage those needs, said the community as a whole has stepped up to address rising concerns related to housing, mental health, food insecurity, and other needs.

“The food shelf has provided much fresher foods. Now we’re getting produce, milk, all those kinds of things,” Misel said.

Live, Learn, Earn is working on getting 50% of the people who live in Scott County to also work in the community.

Launch Ministry in Chaska exists to assist young adults in crisis. Esperanza serves kids and families through food drives, summer camps and community resources. Guild provides mental health care and stable housing for people in the community who need it. Many of those organizations did not exist, or did not have the same presence, as they did in 2010.

“We’re better at counting the people who are experiencing homelessness, too,” Misel said. “We’ve come a long way in learning how to serve the homeless population.”

When Misel first started working at the CAP Agency, there were six staff members in the housing department. Now, there are 12.

While Guthrie said he doesn’t have a crystal ball, the work-from-home culture brought on from the pandemic may push even more people to the suburbs in the next decade.

White alone, not Hispanic or Latino

The average Scott County property owner will see an increase in the county’s portion of their tax bill under the maximum tax levy approved by county officials Sept. 21.

The Scott County Board of Commissioners voted unanimously to approve the maximum 2022 levy of roughly $81.28 million, which is a 3.99% increase over the 2021 levy.

The average property with a market value of roughly $358,000 will see an average increase of $41.42, according to the county.

The county board may choose to decrease spending when the final levy is adopted in December, but the levy cannot be increased following last week’s approval.

With less room in the budget for unforeseen expenditures, the county may need to draw from its fund balance to close any gaps next year, according to Lenz.

It’s possible the county will end 2022 in the red, he added.

The 3.99% increase adds some full-time positions, such as two corrections officers, but squeezes out over $1.3 million in other departmental requests, according to county documents.

During the meeting, Lenz said the county is exhausting its options to reduce the levy in sustainable ways without significant programming cuts.

If the county board doesn’t favor increases, Lenz said officials will need to begin a conversation about what programs and services will be cut rather than asking existing staff to continue doing more work with less support and resources.

The county is already struggling to hire and turnover is reaching alarming rates, he said.

Commissioners Tom Wolf, Mike Beard and Dave Beer urged county staff to continue looking for ways to decrease the levy before the final adoption in December.

County Administrator Lezlie Vermillion cautioned any decreases to the levy would likely result in significant changes to the county’s level of service with some programs, such as community corrections and social services, already under strain.

The county board will discuss the budget again this month. A vote to adopt the final levy is scheduled for Dec. 14.