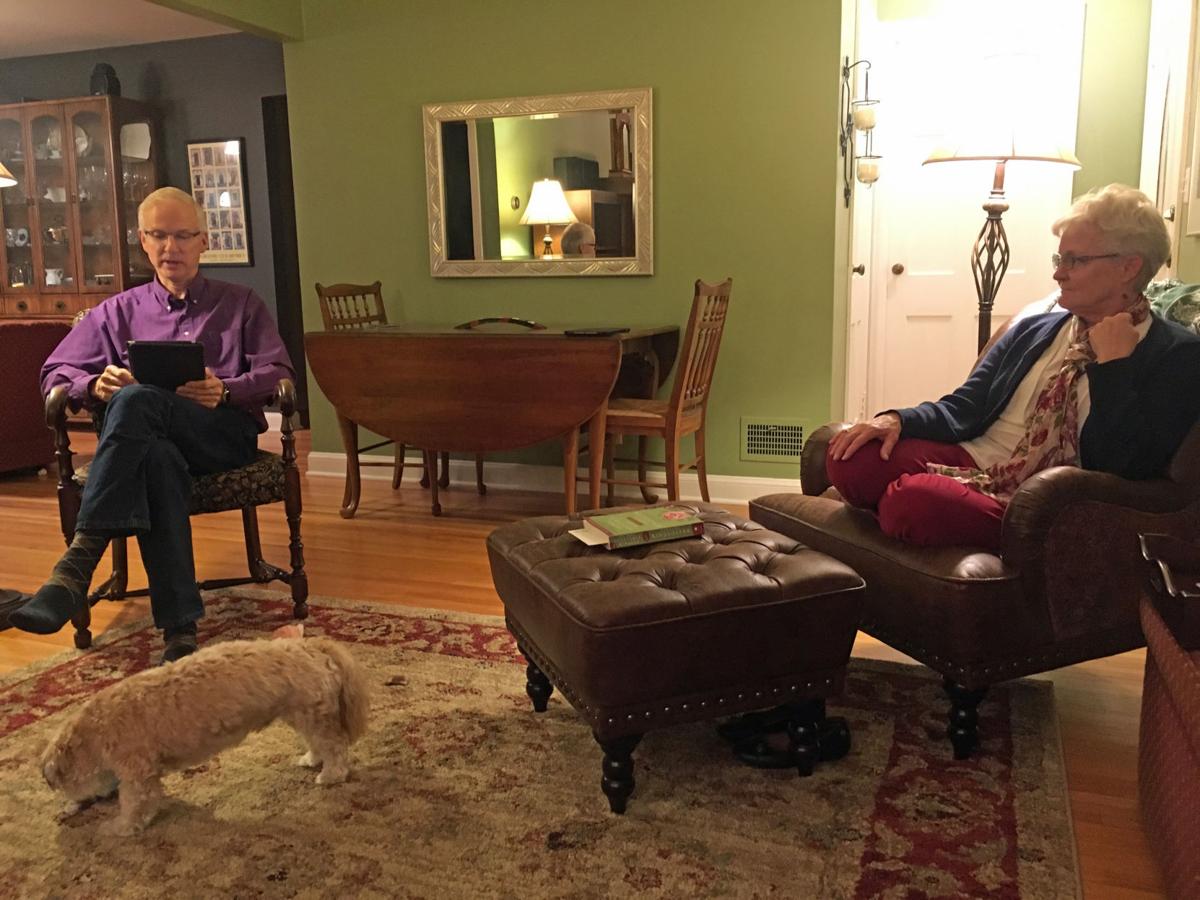 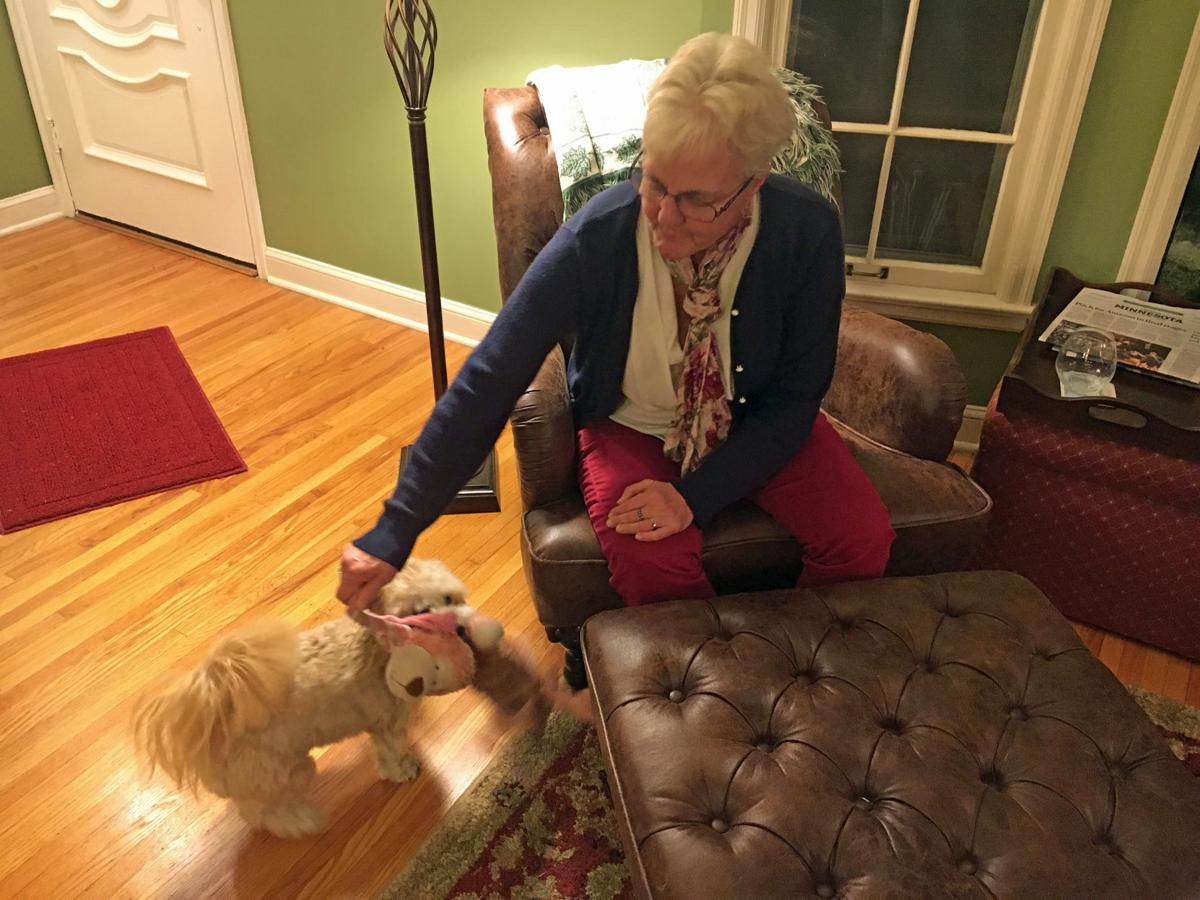 Nancy Olson with her and Rolf’s dog, Mocha. 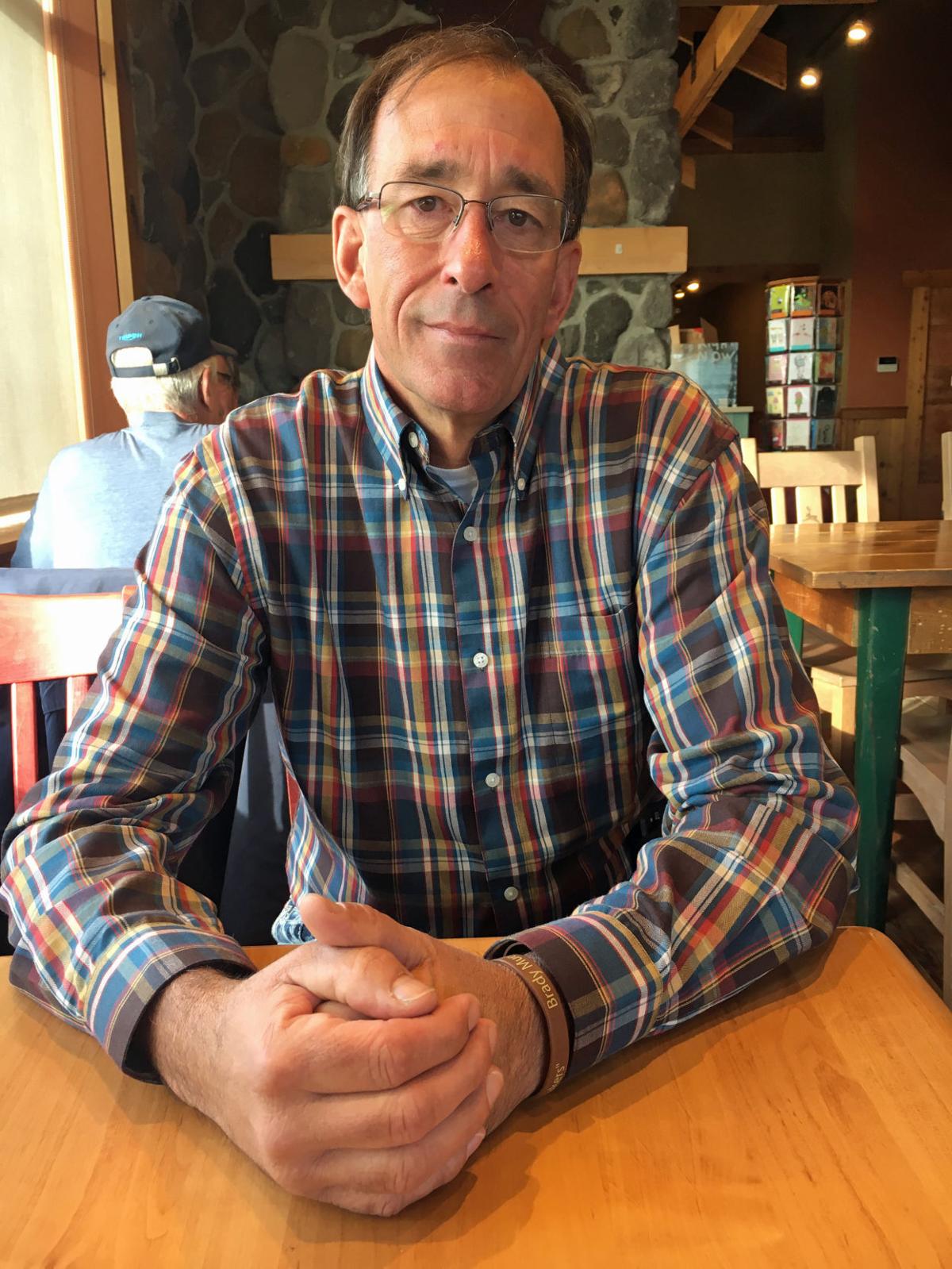 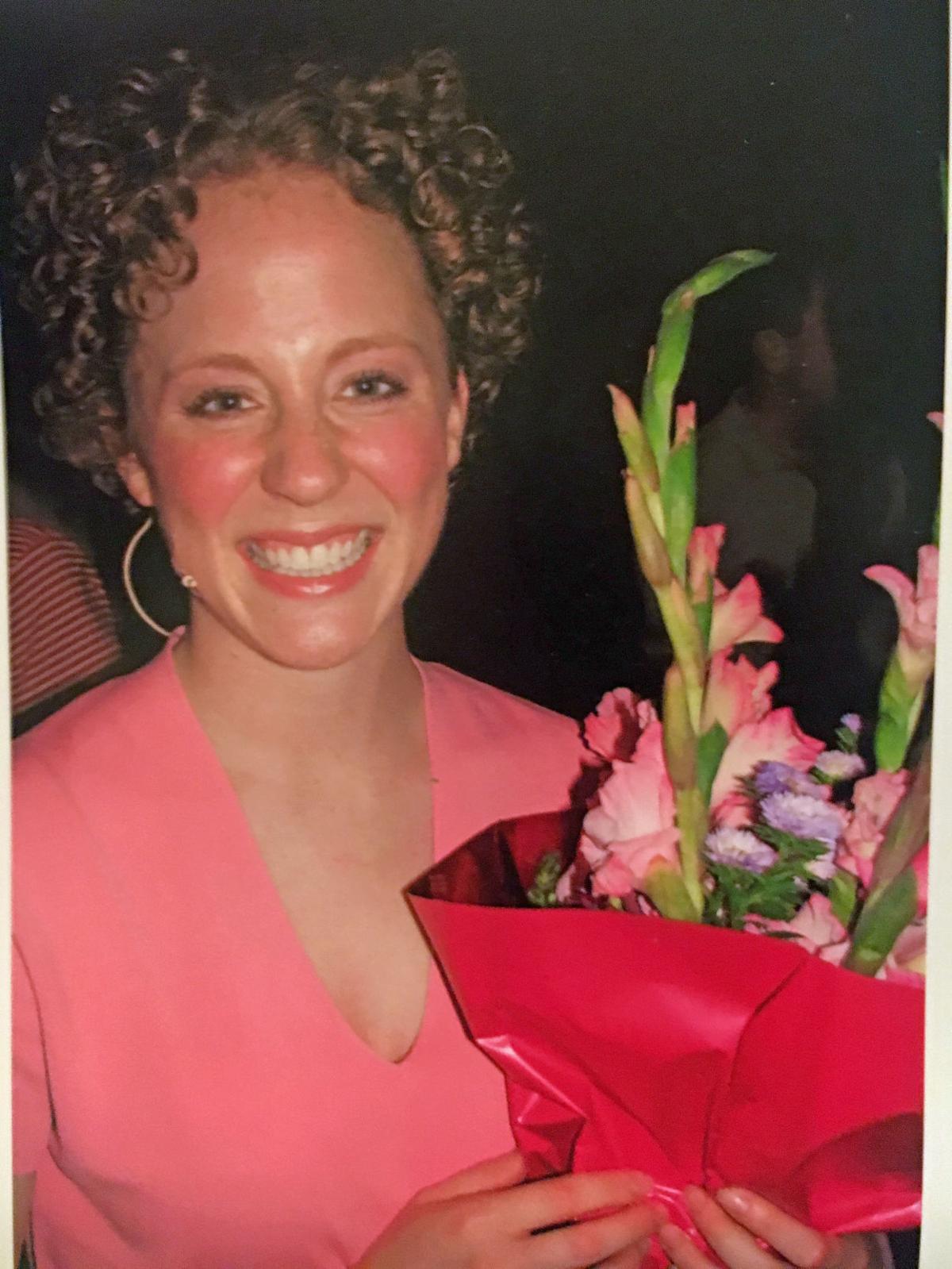 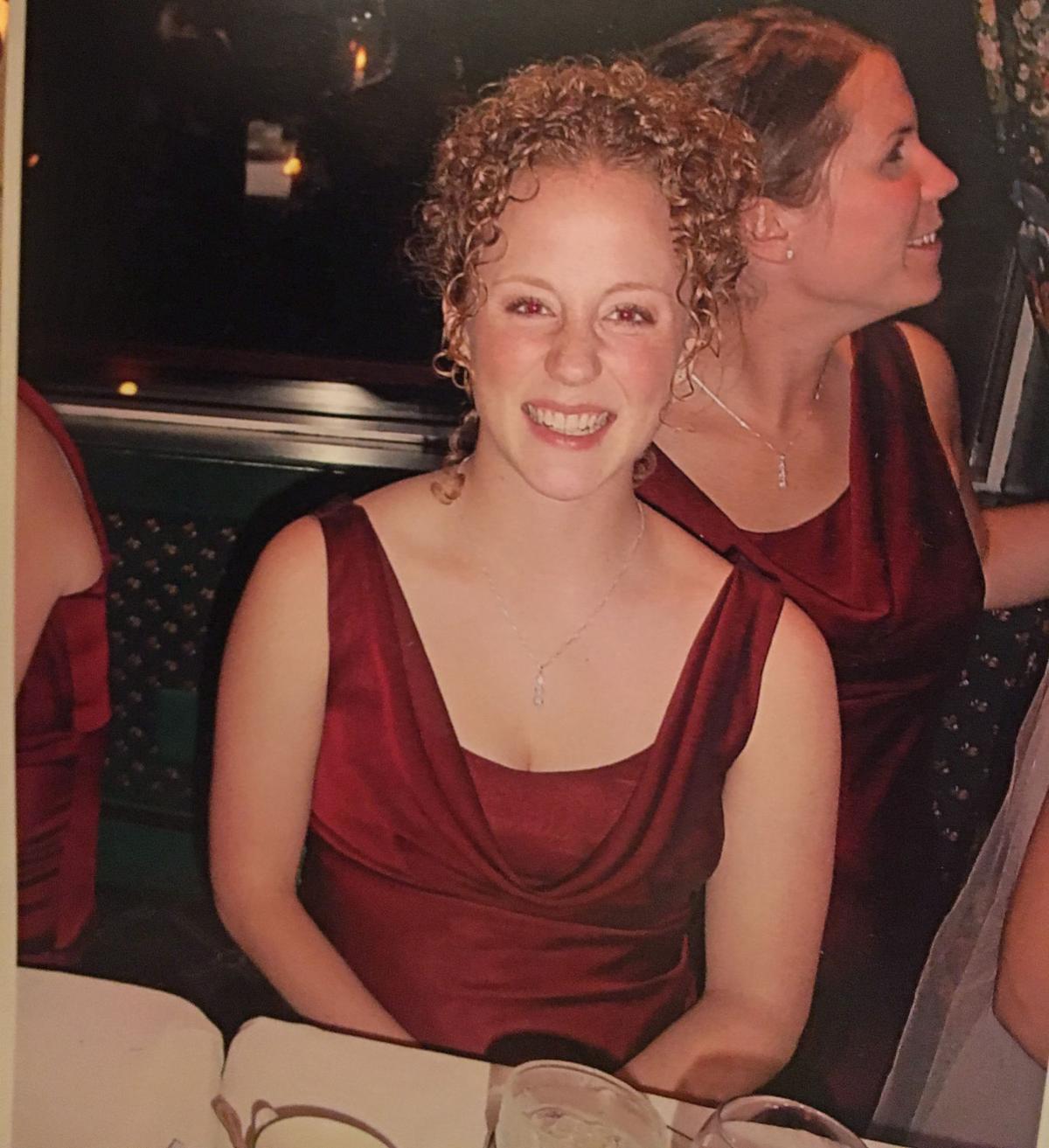 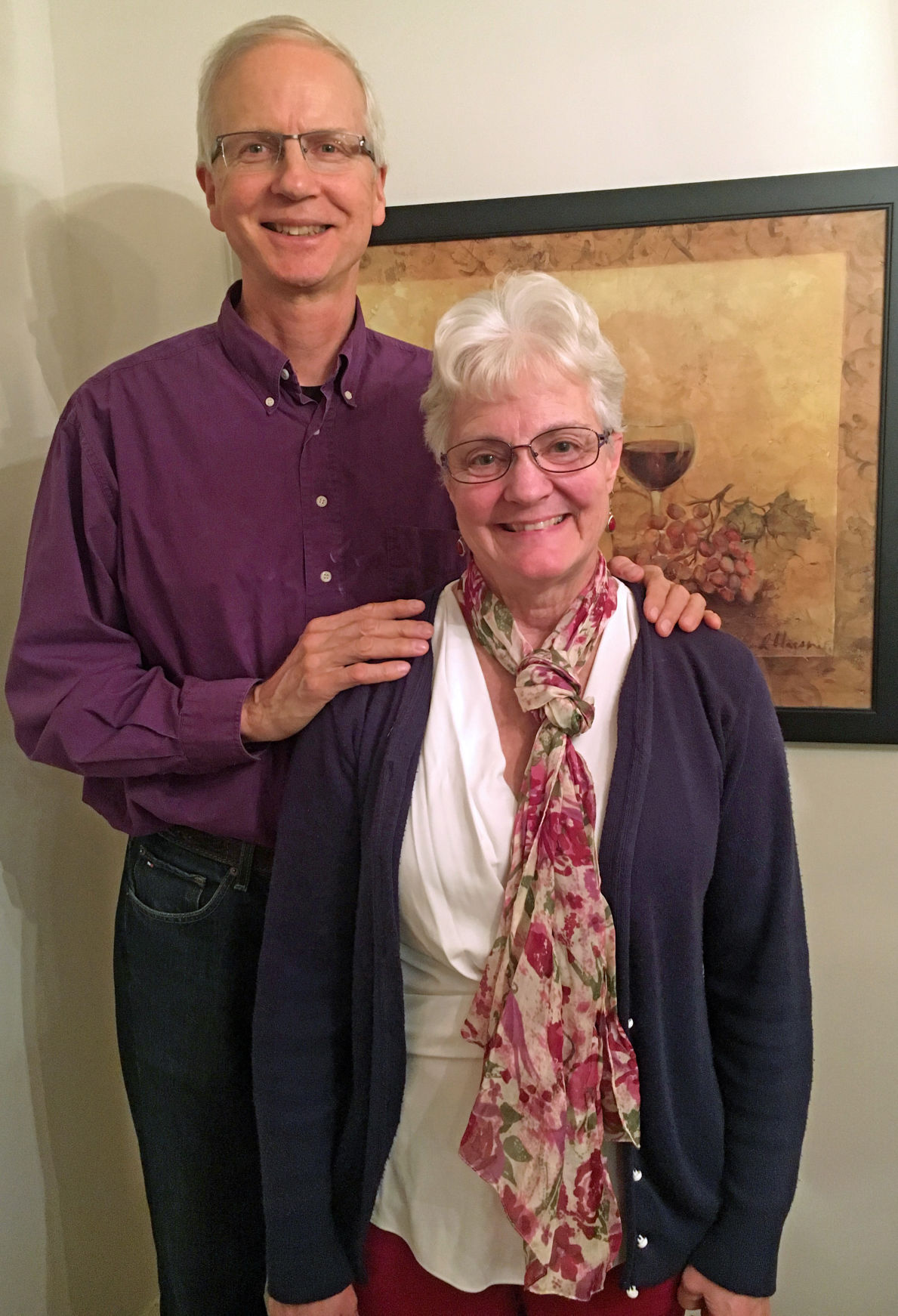 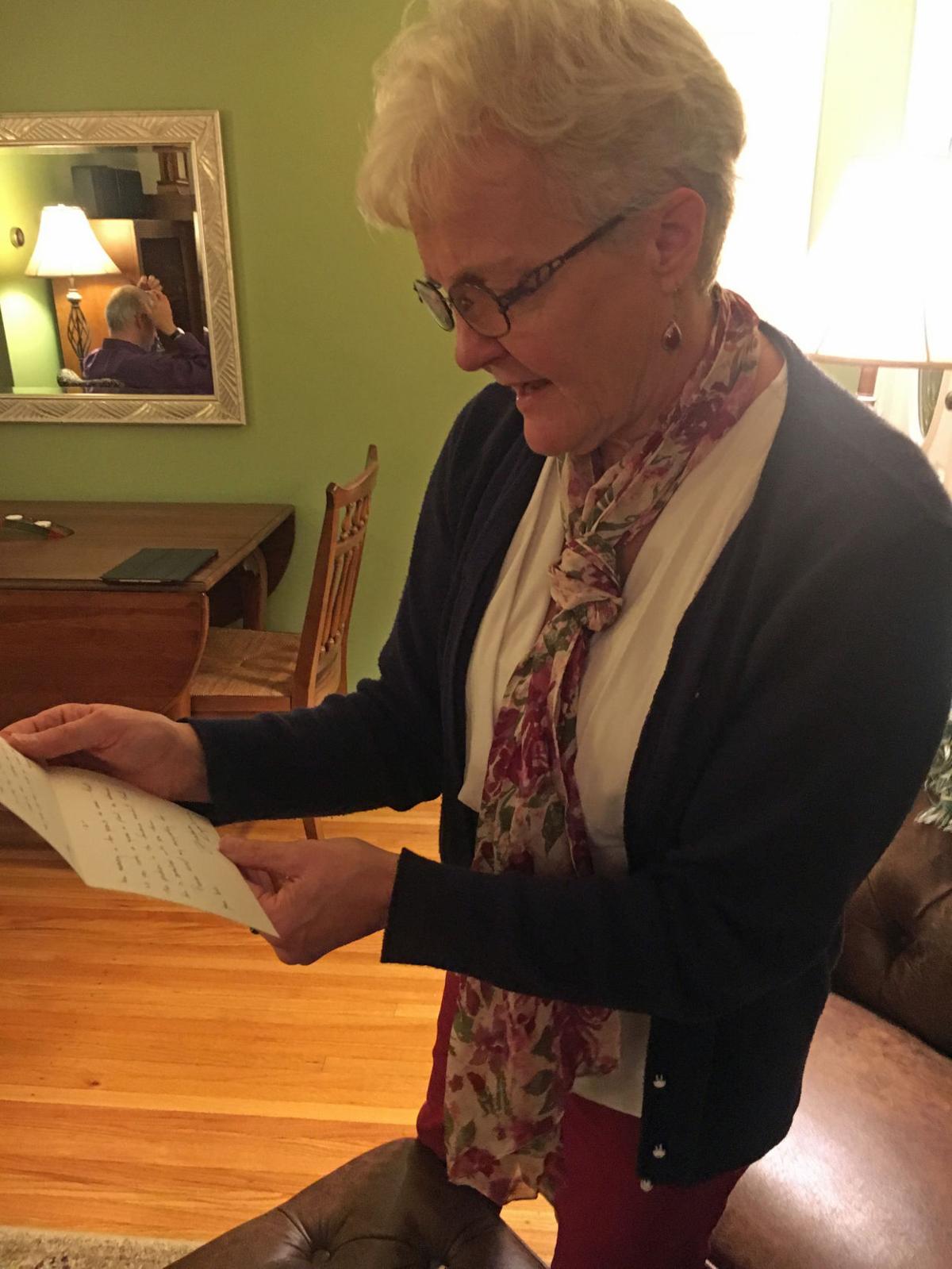 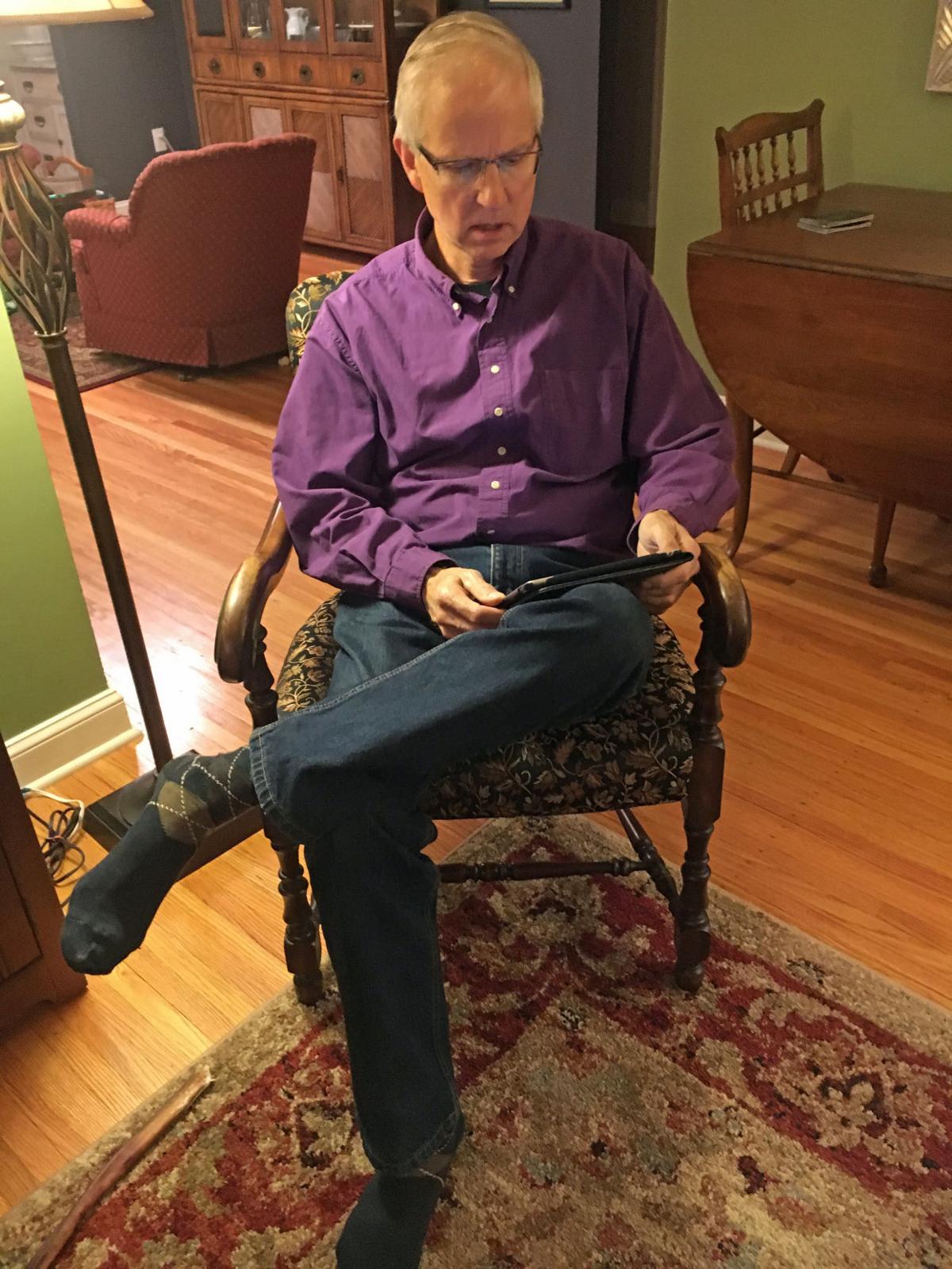 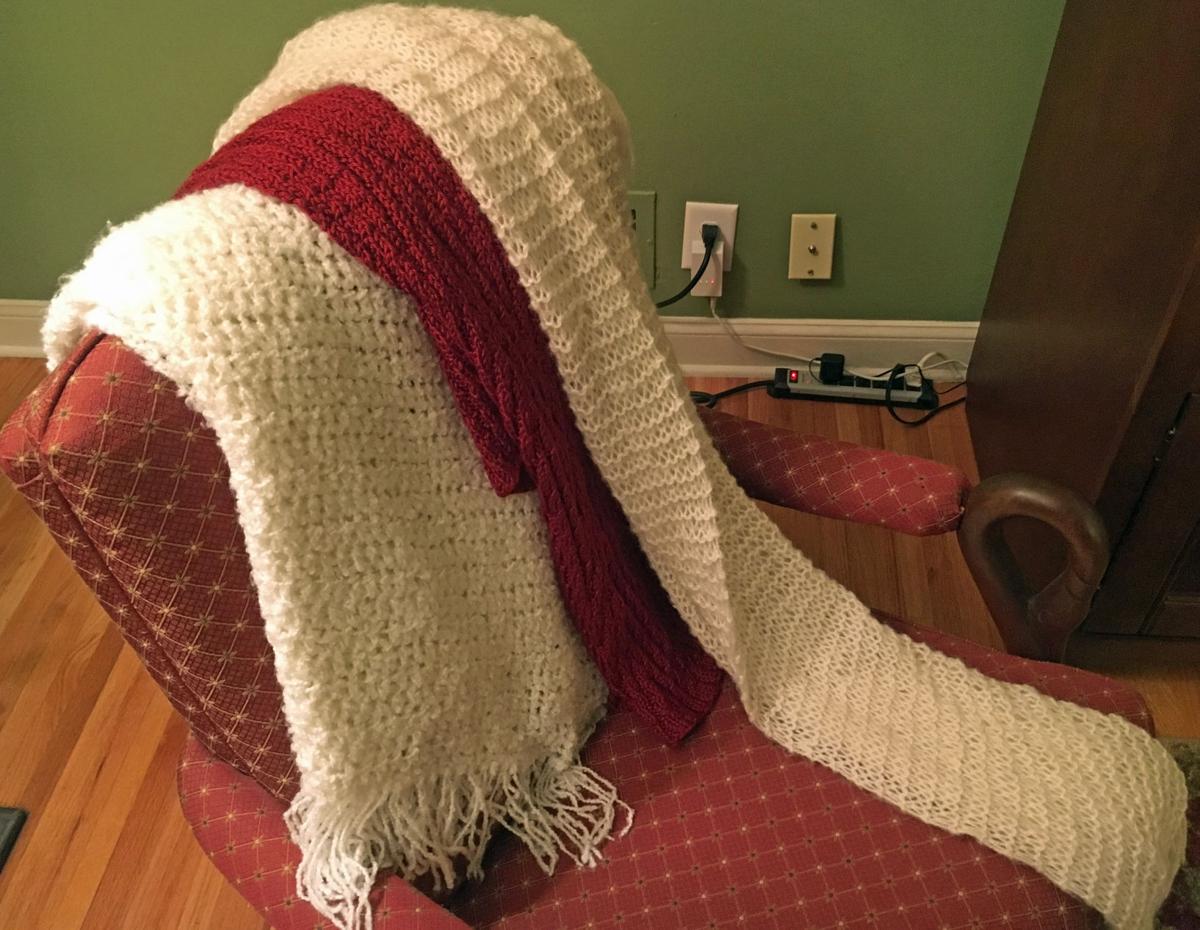 These are just a few of the prayer shawls that people sent to the Olsons after Katherine's death. 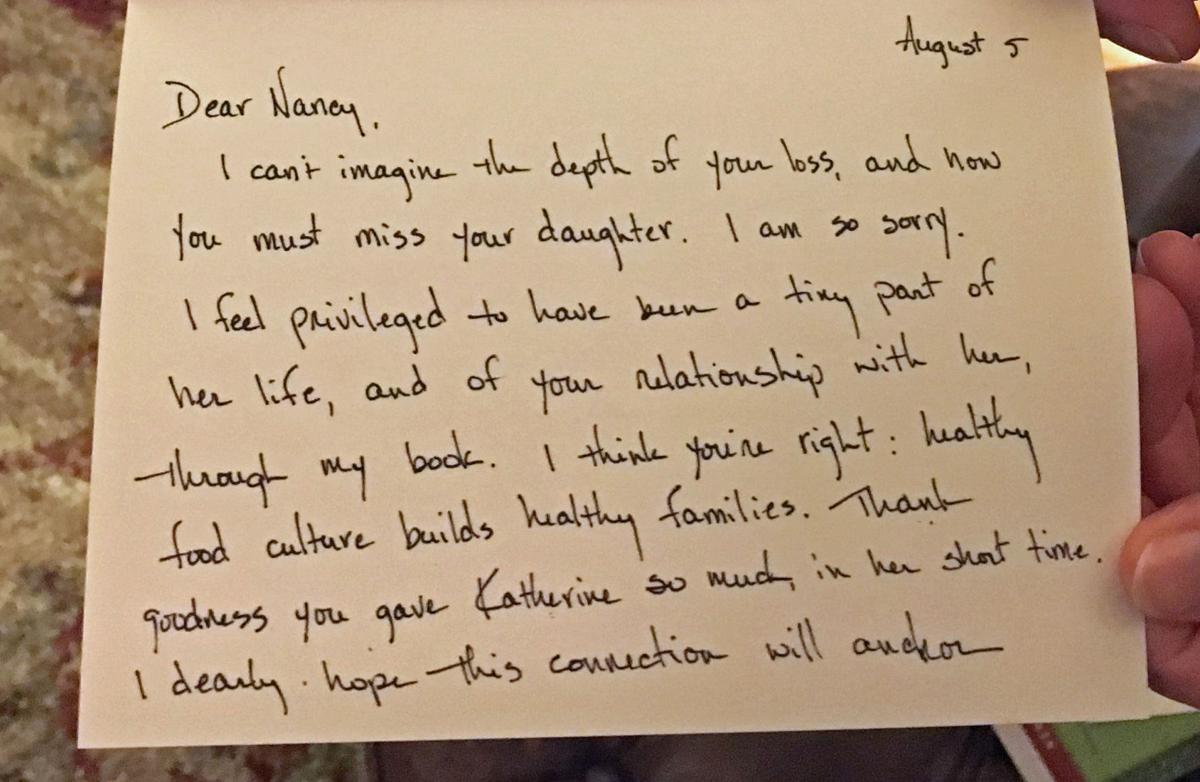 Famous author Barbara Kingsolver sent a note after learning about the Olsons' story. 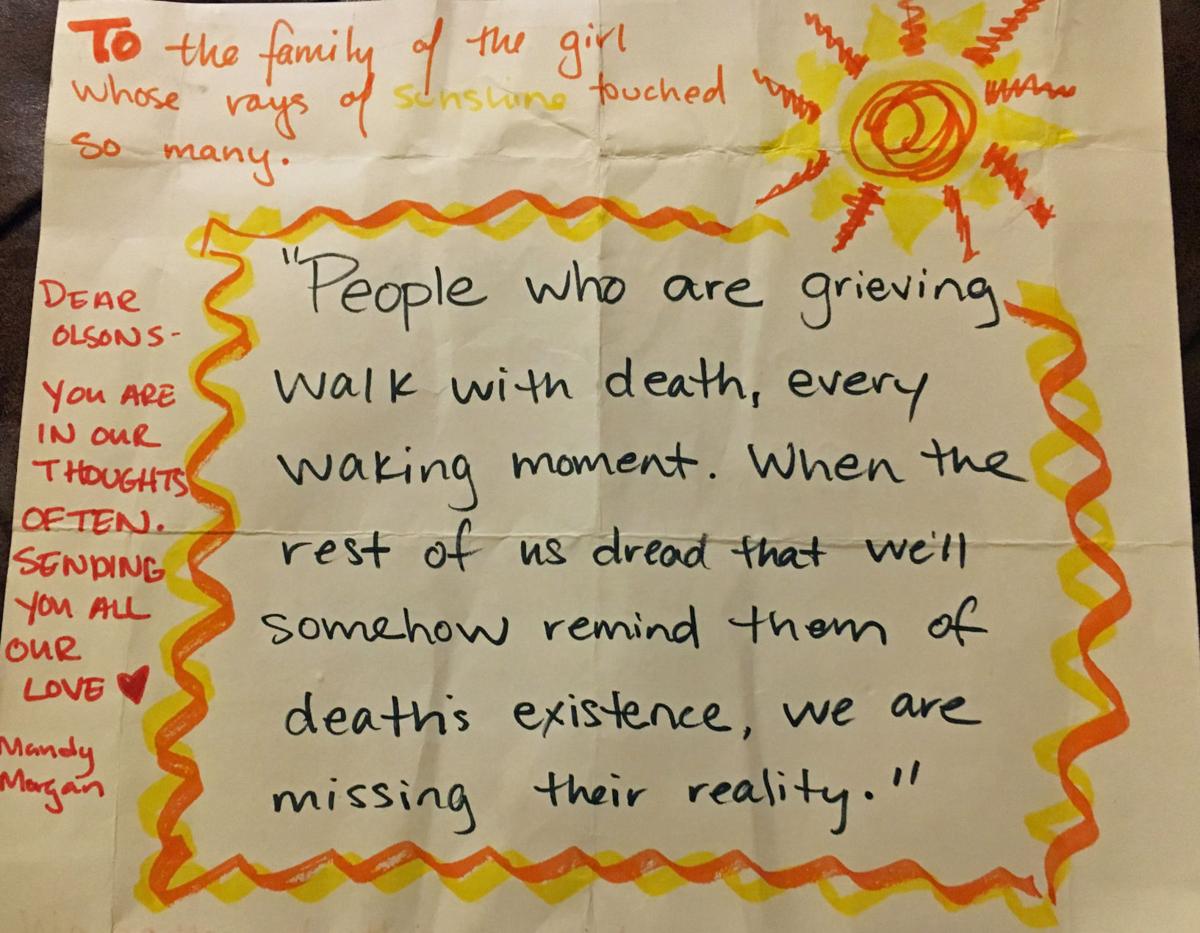 Rolf and Nancy Olson say they received thousands of cards and letters. This is just one example.

These are just a few of the prayer shawls that people sent to the Olsons after Katherine's death.

Before the bullet cracked her skin, before the police searched with terror and desperation for her body, before a grand jury found a young man guilty of her murder, Katherine Ann Olson was an exuberant 24-year-old with a love for theater and a promising future.

Ten years ago, on Oct. 25, Michael John Anderson, a 19-year-old who lived with his parents in Savage, drew a .357 Magnum Blackhawk Revolver and shot Olson in the back. She had shown up to the house in response to a Craigslist ad he posted where he claimed to be a woman named Amy who was looking for a babysitter. The murder was the first to be associated with the popular classified advertising website Craigslist. An international audience turned its eyes and ears toward the case.

He was sentenced to life in prison without parole and remains in a facility in Stillwater, according to the Minnesota Department of Corrections.

Attempts to reach Anderson in prison for comment were not successful.

A decade after Katherine’s death, her parents Rolf and Nancy Olson said in an interview that life without their daughter has never been the same. They liken it to an orchestra that plays with an out-of-tune instrument, an analogy they heard through a friend.

“It never goes away. You never have closure. You learn to live with a new normal,” said Nancy, whose feet were tucked behind her legs as she sat on a living room chair near soft light. “The orchestra of life goes on… [but the] instrument plays way out of tune.”

‘WE NEEDED SOME KIND OF CLOSURE, TOO’

The trauma of losing her daughter at all, let alone in such a brutal way, haunted her. But so did the arduous, long trial.

David Muelken was a Savage police captain at the time of Katherine’s death. He’s now retired but works as a contract investigator. To this day, he remembers the case vividly.

He said he handled two murders in his 35 years with the Savage Police Department. Katherine’s death was the first.

“Over my career I’ve had to go knock on doors and deliver bad news before,” he said. “This was a homicide. This was way different.”

He and Chief Rodney Seurer showed up at the Olsons’ residence in Cottage Grove to tell Rolf and Nancy in person that police had found Katherine’s body.

“I was in tears trying to explain what was going on,” Muelken said.

The Olsons speak warmly of how Savage police and other law enforcement handled the case. In fact, Muelken and Laura Kvasnicka, who was the lead detective sergeant for the case, attended Katherine’s funeral. They planned to sit quietly and out of sight, but Rolf and Nancy insisted they sit up front with the family.

“We wanted to be there because it affected us,” Muelken said, tearing up. “We needed some kind of closure, too.”

In photos that rest at the Olsons’ home, Katherine’s tight golden-brown curls sit perfectly as her fair skin radiates different shades of pink. Her smile glows warm and bright.

She graduated from St. Olaf College in Northfield, where she pursued theater and Hispanic studies. The Olsons say their daughter was extroverted and talkative and had many friends. “She was well-loved,” Rolf said. She was kind and compassionate, and on her grave marker, she is described as “the girl who looked like sunshine.”

During the trial, law enforcement officials said Katherine had the world at her feet.

“She was so brilliant and so talented and it’s just such a terrible loss to the world that she’s not around,” Nancy said.

But Katherine was not perfect. She had so much energy that both she and Rolf lovingly describe her as having been “a lot of work.” She changed her mind often, they said. She needed to verbally process her life often. And sometimes Katherine would go weeks without communicating. “She drove me crazy,” Nancy said with a smile.

“I don’t ever want to make her into a saint because she was a human being with flaws,” she said.

Rolf misses her, too. He began to cry from his living room as he read from a Facebook page called “Remembering Katherine Ann Olson,” which has more than 1,800 members. The page is full of stories from family, friends and people who never knew her personally but wish to remember her fondly.

Like one story from a woman who says she was a student of Nancy’s, who teaches English at Tartan High School in Oakdale.

“Katherine’s story was woven throughout our Bible as Literature class and there are some inspirational and moving class discussions that I will never forget (particularly that of Abraham and Isaac),” Alyssa Happe posted on the public group last week. “So I did not know Katherine, but she taught me a lot of things. I believe she was the kind of person I’d wished I met and, knowing her mother, I’m sure she was nothing short of remarkable.”

Rolf shares stories about Katherine with large groups of people, too. He’s the pastor at Richfield Lutheran Church and he has shared stories about her murder during his sermons and classes.

The spring after Katherine’s death for lent, he preached for a series on forgiveness.

“I need to preach this because I need to work through this,” Rolf remembers thinking.

He learned that true forgiveness doesn’t mean to make friends with a harmful person. Instead, he said, the New Testament says forgiveness means “to let go,” “to cut loose,” “to release.”

Rolf said true forgiveness means “to let go of the toxins that Katherine’s murder released into our lives.”

“What we have done is just cut him loose,” Rolf said. “So to forgive someone means to dispense with the influence they have over you.”

But, Rolf said, it’s a choice he continues to make. The emotions surrounding Katherine’s death do not just disappear. When he wants to descend into darker places, he said he remembers their family’s commitment to “stay in the light of Christ, because that’s where Katherine is.”

Now more than ever, holidays like Good Friday and Easter have become more meaningful to him.

“God knows the loss of a child. Jesus knows the suffering we have, which I find very comforting,” he said, light shining softly from the living room.

At 9 a.m. on Oct. 25, the time law enforcement estimated Katherine died, Rolf will pause for a moment of silence.

The Olsons’ moments are now protected with more privacy than in the time following Katherine’s death. Their story attracted immediate media attention worldwide. In fact, they got so many requests for interviews from a variety of national and even international media outlets that they created a mission statement to keep themselves centered. Their family, which includes daughter Sarah and son Karl, did not agree to each invitation. Not every request aligned with their family’s mission, which was to honor, uphold and celebrate Katherine’s memory.

When they weren’t considering media requests, the Olsons spent their time sorting through stacks of books and thousands of cards from people who offered support and wished for their healing. About 15 prayer shawls were sent to their home, too, which they still have.

They even received a touching card from famous author Barbara Kingsolver. The last book that Katherine read before her death was Kingsolver’s “Animal, Vegetable, Miracle: A Year of Food Life,” Nancy said. She and Rolf read the book after Katherine’s death and Nancy left a note on Kingsolver’s website. The author responded with a personal card she wrote to the Olsons.

Nancy works as an English teacher so it’s fair to say she appreciates notes and stories more than the average person. She referred to a book called, “The Things They Carried” by Tim O’Brien. In it a character says death is like being stuck inside a book no one is reading. This made Nancy weep every time she read it. She wants Katherine to stay alive by continuing to tell her story.

“I want that book of her life open,” Nancy said.

In fact, sharing openly is how Rolf and Nancy say they have found solace and healing over the years. From the dark, raw beginning to the wrenching moments that continue to wash over their lives today, great gifts have arrived in the form of friends and loved ones who listen without judgment, the Olsons said.

“One thing they didn’t do was try to fix us,” Rolf said.

People let them cry and rage and question. Some were people who had lost children and spouses and faced other loss.

Speaking freely about Katherine was, and still is, healing.

“It is not an imposition to bring something up about Katherine,” Rolf said. “It’s a gift.”

Somewhere, an orchestra plays out of tune. Nancy and Rolf’s hearts beat heavy in the crescendos and the silence. But Katherine’s story lives on.

About five weeks after Katherine Ann Olson died, the Olson family hosted a concert for her at Grace Church in Eden Prairie. About 1,200 to 1,300 people showed up, Nancy Olson said.

They have raised about $100,000 for Katherine that goes toward a scholarship fund in her name at St. Olaf College, where Katherine pursued Hispanic studies and theater. So far, seven students, all of them Latina, have received scholarships through this fund.

Anyone interested in donating can do so by giving a gift through the college’s website and designating the gift for the Katherine Ann Olson memorial scholarship.