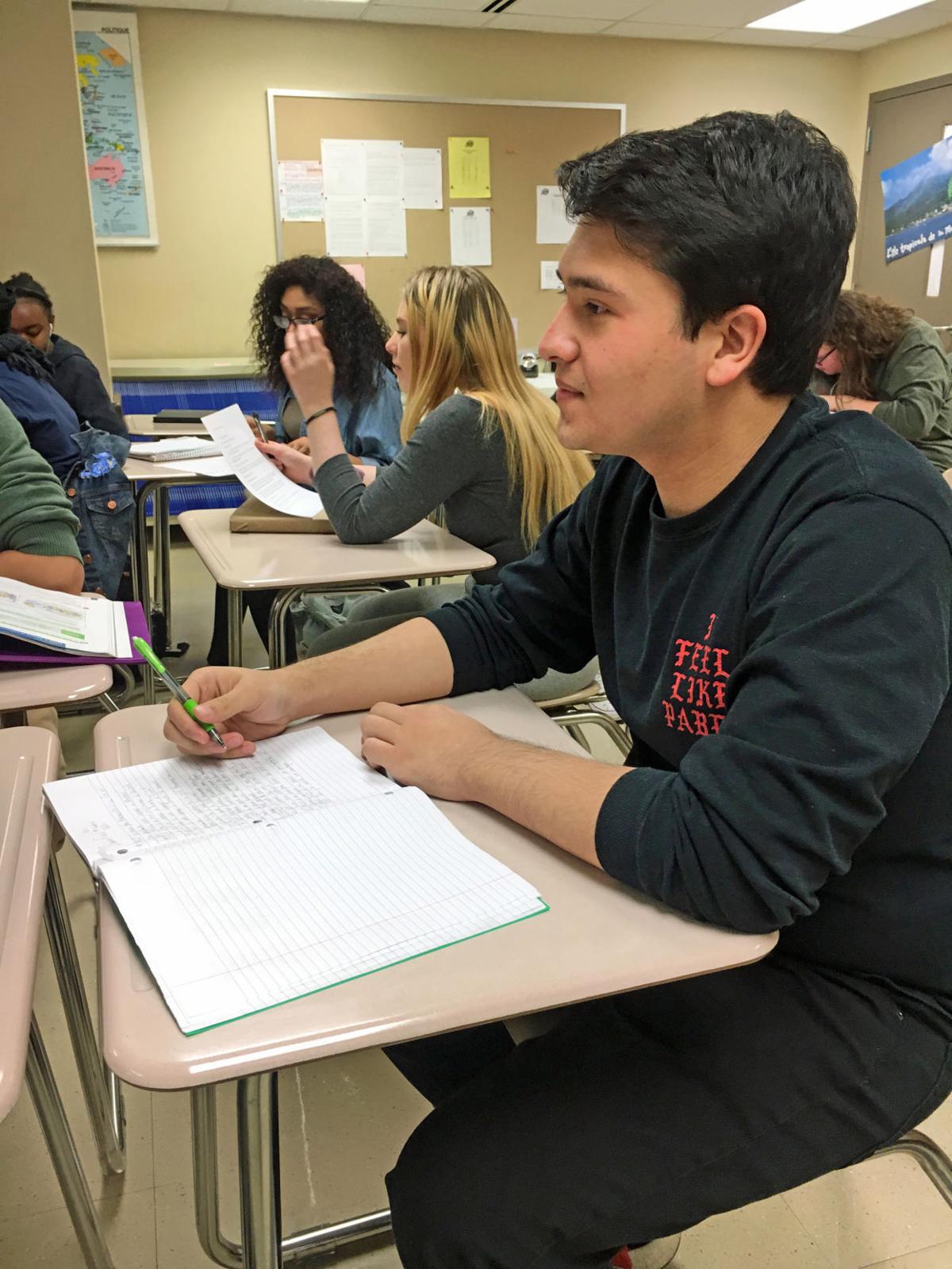 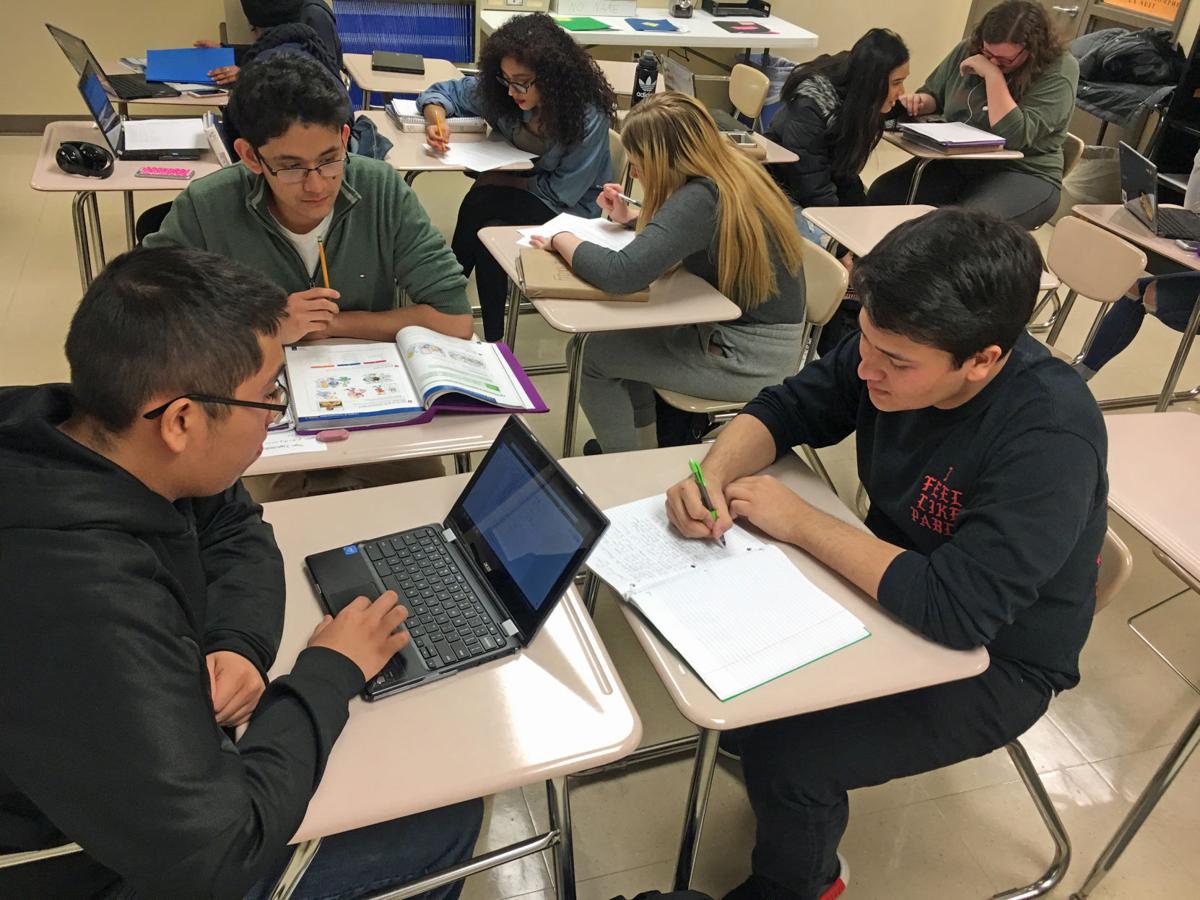 Justin Jasperse, right, works on a group project during French class alongside classmates Marco Flores Valadez, 18, of Eagan, left, and Victor Sanchez, 18, of Eagan, pictured in the top middle. 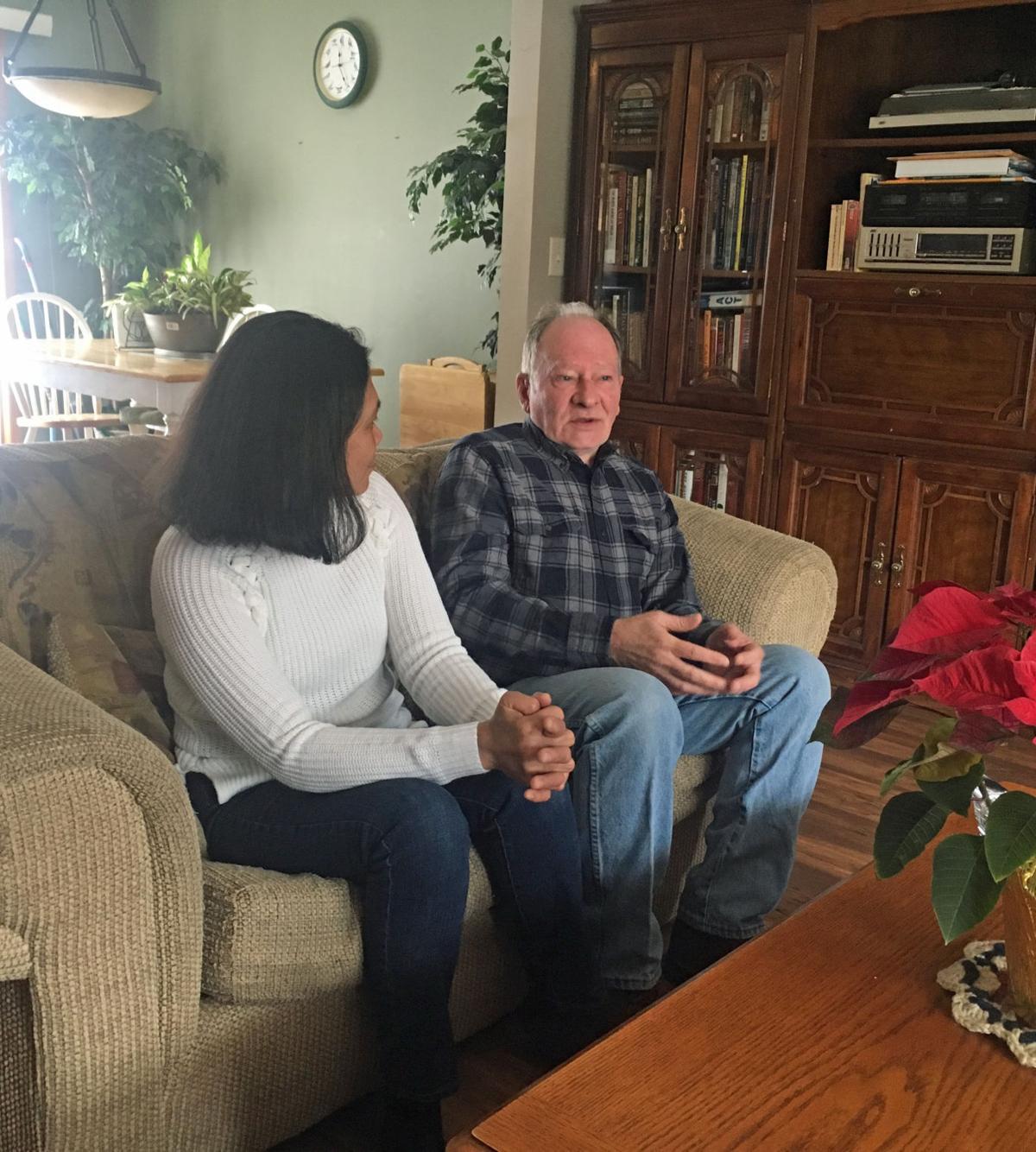 Left - Rose Jasperse, left, and Jean Paul Jasperese, right, talk about their son’s accomplishments. “You’ve gotta be careful about what you tell your children what they can’t do,” Jean Paul said. “Because they’ll surprise you.” 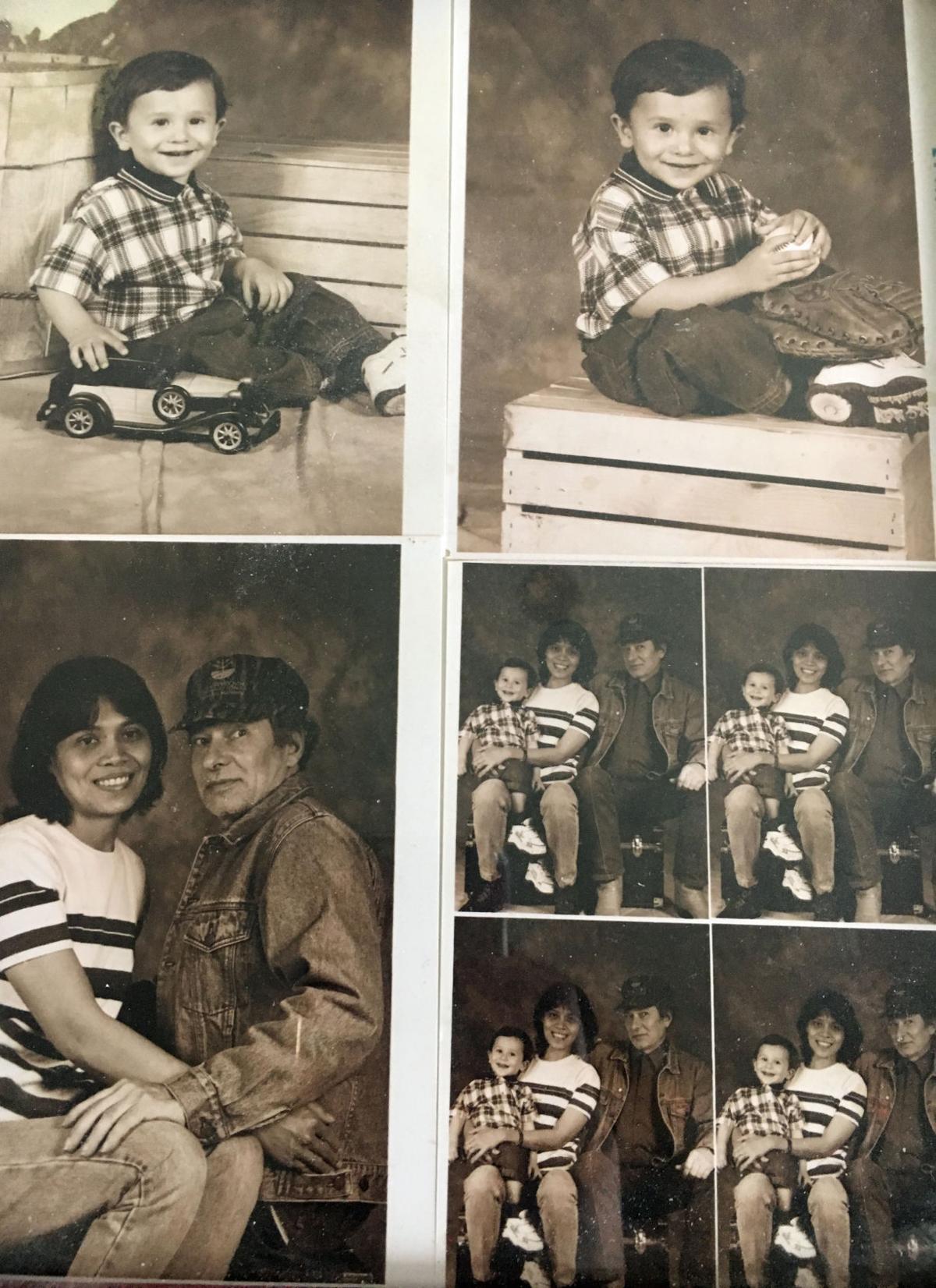 Above - Justin Jasperse and his parents, Rose and Jean Paul Jasperse, are pictured here in a collage of old family photos they keep in their Burnsville home. 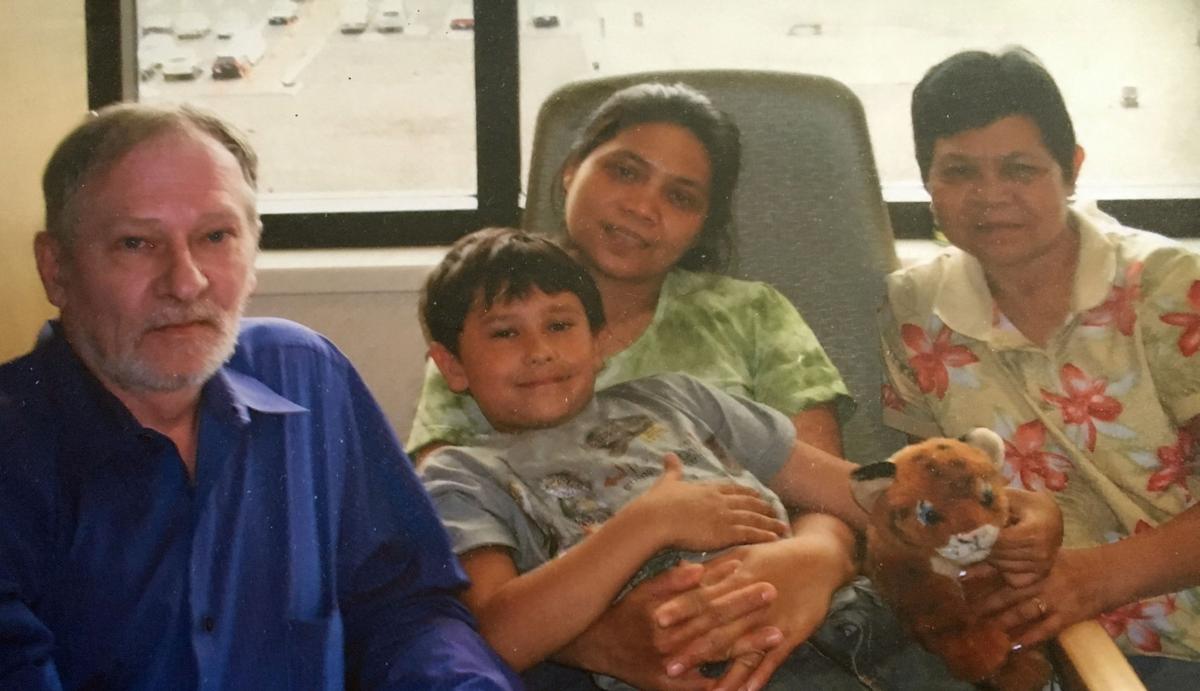 Justin Jasperse was only 11 years old when the bank foreclosed on his parents’ home.

It was 2011. Jasperse’s parents had long lived under strained financial conditions. His dad, Jean Paul, now retired, worked as a factory worker at PepsiCo in Burnsville for 30 years, riding the waves of layoffs and callbacks and strikes. His mom, Rose, works as a chef. As the oldest of five kids, she has always sent money to her siblings and other family members in the Philippines, where she was born. With all the responsibilities, there wasn’t anything leftover for things like family vacations, except for the one time they went to the Wisconsin Dells.

The foreclosure was a pivotal moment in his life, the Burnsville teen said.

“I decided, this really sucks,” he said. “The struggle of living in an apartment made me feel more (determined) than ever to have a marketable career.”

Jasperse’s determination has already taken him further than most will go and he hasn’t even graduated high school yet. Jasperse, 18, is a senior at Burnsville High School. He’s one of less than 1,000 students selected from a sea of 16,000 applicants for a scholarship program called QuestBridge, which links high-achieving low-income students with top universities across the country.

On a full ride.

“Justin’s intellectual curiosity is unparalleled,” Jasperse’s social studies teacher Kristina Aars said in a recommendation letter for the scholarship. “Some of my favorite teaching moments this year came when Justin asked some deeper questions about the information we were covering that week. His curiosity led us to grapple with some tough questions, which expanded the learning for all of us.”

The full ride is worth at least $300,000 and includes plane tickets to come back home to visit his family.

Justin’s academic career has been filled with one win after another.

He’s got a 4.0 grade point average, and that’s even after taking the most advanced courses he can, including College in the Schools, AP and honors courses. He killed the ACT with a score of 35. And he’s a beloved member of the Academic Quiz Bowl team.

“During his junior year… Justin lead the Burnsville B Team to its highest ever finish in the Minnesota State High School Quiz Bowl League, recording eight victories in 12 matches and placing 26th out of 139 teams,” Coach Les Moffitt wrote in a recommendation letter for Jasperse’s scholarship. “He finished as his team’s top scorer and placed (30th) overall out of more than 700 students in last year’s league. In fact, Justin finished as his team’s top scorer in all but three of the tournaments he competed in during his junior year.”

Not only was the foreclosure a memorable event that motivated him to succeed. But he also learned from his parents, including his mother, Rose Jasperse, who grew up in poverty in the Philippines. His dad, Jean Paul Jasperse, also came from a difficult upbringing; he was abandoned at 3 years old and then adopted.

“That’s part of also why I want to be successful,” Justin said. “We’ve been through a lot.”

Justin found the scholarship opportunity on his own. He knew that with his grades, ACT score and involvement, he had a good shot at a scholarship. He took the initiative and made the discovery on his own.

“I found QuestBridge kind of on accident,” he said.

The day he found out he got the scholarship worth hundreds of thousands of dollars, Justin, his parents, and his grandma who lives with them, all gathered around together.

She said her son thanked his parents for feeding him, for letting him study instead of do chores and for helping him.

‘I tried to enable him’

Jean Paul said having been abandoned at a young age and not having what he needed, he knew the importance of showing his child he is loved and belongs.

“Tell me what you need,” he recalls saying to his son over the years. “I tried to enable him but I was a little handicapped.”

He means, of course, he couldn’t buy much. But he provided the electronics he could. And anytime Justin was interested in a subject, he would feed his intellect with books.

And the two constantly talk about everything from history to religion to current events, and more.

“We talk about all kinds of things,” Jean Paul said.

He also recalled how Justin used to actually read to him. At 5 or 6 years old, for example, Justin read Calvin and Hobbes to his dad. Jean Paul knew then that his son was special and smart.

“There was something about him,” he said of his son.

“One would be very hard pressed to find a finer individual with more tact and propriety,” Moffitt wrote. “After several trips to tournaments in other towns and states, other teachers that helped chaperone have remarked that Justin made sure to personally thank them for giving up their time to drive the team to competitions. I have never heard him say anything negative about someone. He is the type of person that says please and thank you, calls elders by titles of respect, and holds the door open for the next person. Justin Jasperse simply does things the right way.”

Jean Paul said Justin has dreamed about the future ever since he was a kid.

He started out wanting to be a basketball star. Then he wanted to become a detective, though he didn’t want to be a policeman, so that idea was quickly thrown out.

Justin now wants to study political science or international relations, with the goal of becoming a U.S. diplomat. Or a lawyer. Or a judge.

He said his parents have always been loving and supportive. They never pushed him to be the perfect student. Instead, Justin said they emphasized the importance of being a good person.

“You’ve gotta be careful about what you tell your children what they can’t do,” Jean Paul said. “Because they’ll surprise you.”

“You’ve gotta be careful about what you tell your children what they can’t do. Because they’ll surprise you.”