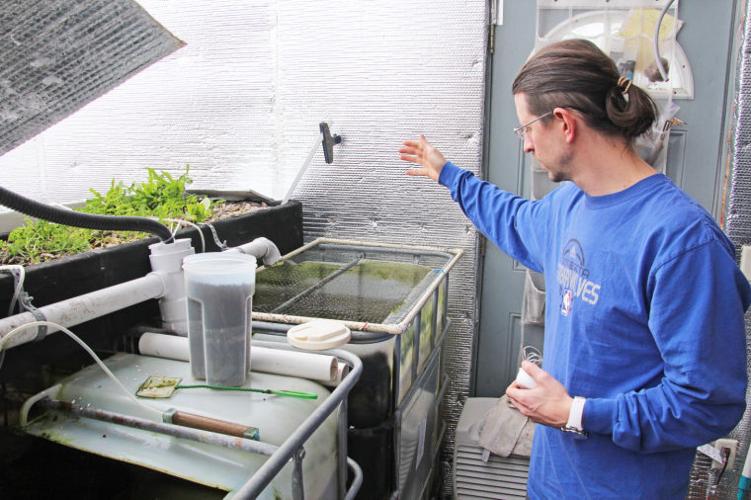 Attila Pegan is in charge of feeding and monitoring the fish while his wife, Roz Hansen, takes care of the plants. Here, Attila tosses food pellets into Tank No. 2, which contains about 30 rainbow trout. 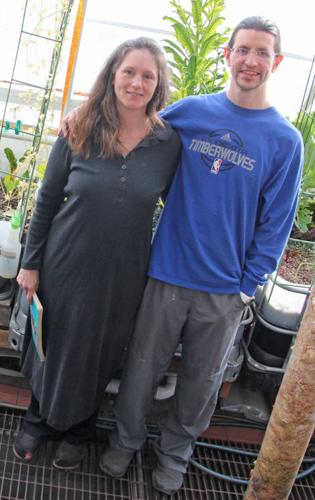 This is the second season of aquaponics gardening for Roz Hansen and Attila Pegan, who built the greenhouse addition onto their downtown Savage home last January. 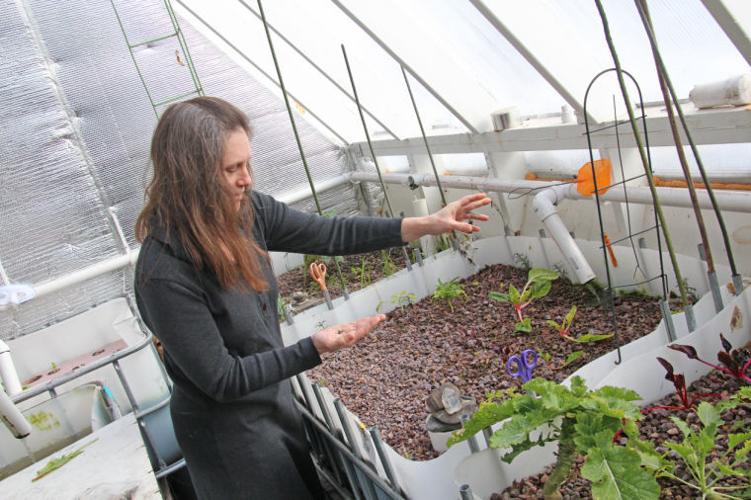 Roz Hansen scatters lettuce seeds in one of the greenhouse’s soilless beds. 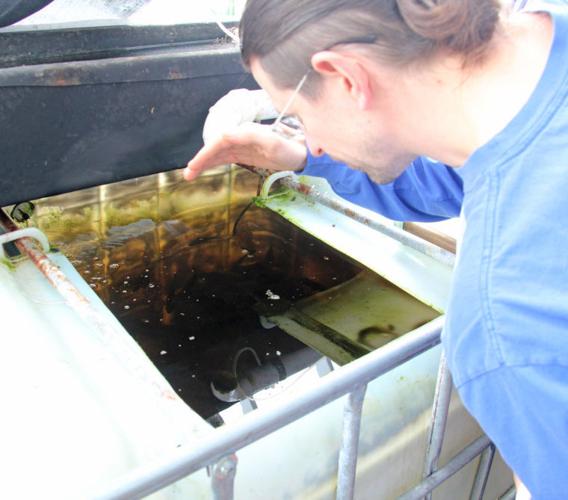 Attila Pegan checks on the sunfish and large-mouth bass in Tank No. 1, which contains about 200 fish. 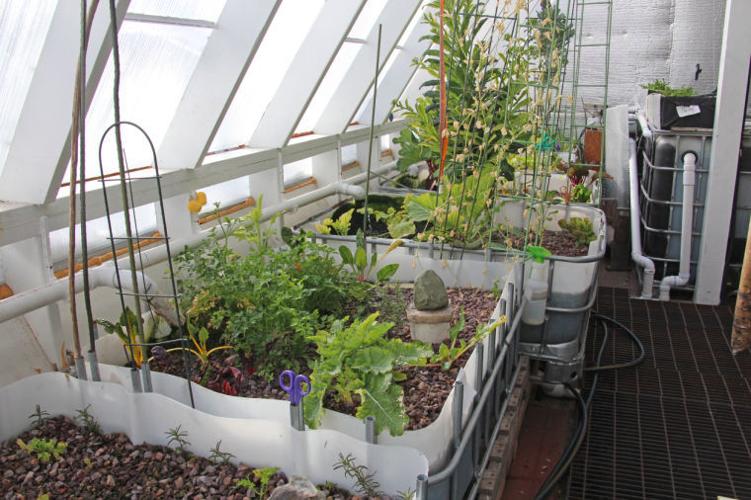 Water filters into the plant beds where various types of cold-weather crops are currently growing. 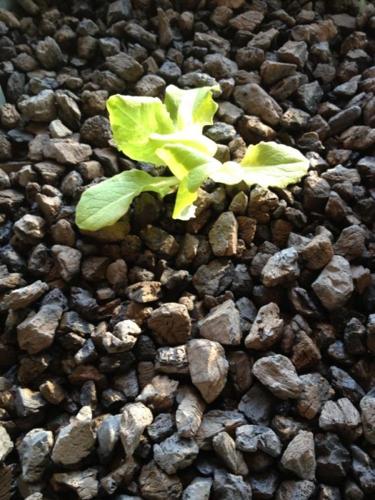 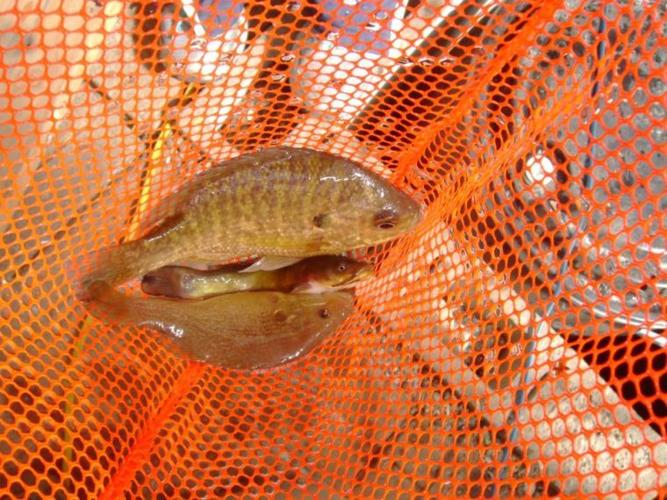 Attila Pegan is in charge of feeding and monitoring the fish while his wife, Roz Hansen, takes care of the plants. Here, Attila tosses food pellets into Tank No. 2, which contains about 30 rainbow trout.

This is the second season of aquaponics gardening for Roz Hansen and Attila Pegan, who built the greenhouse addition onto their downtown Savage home last January.

Roz Hansen scatters lettuce seeds in one of the greenhouse’s soilless beds.

Attila Pegan checks on the sunfish and large-mouth bass in Tank No. 1, which contains about 200 fish.

Water filters into the plant beds where various types of cold-weather crops are currently growing.

The Internet made them do it.

At least that’s how the seed was planted in Attila Pegan’s mind for a home-based aquaponics operation – marrying fish and plants for a synergistic growing environment.

His wife, Roz Hansen, gladly jumped on board.

Now, well into their second season, they’ve got a system down in the greenhouse attached to their downtown Savage home. Attila takes care of the fish, and Roz – with her self-proclaimed two green thumbs – takes care of the plants.

YouTube videos featuring aquaponics greenhouses piqued Attila’s interest and he went on to visit other websites, read books and chatted up local experts. The couple originally dreamed of a 10-foot by 12-foot structure in the backyard – a fancy shed, if you will. But plans mushroomed when they took their idea to the city of Savage planning department.

The city would only allow one detached structure, Attila explained, and the detached garage already served that role. It was a city staff member who suggested the addition to the house, which – with the help of an architect — turned out to be a 14-foot by 28-foot greenhouse.

It is a passive solar greenhouse, which means the sun heats water in large, black barrels – even on blustery February days – to a balmy 60-some degrees.

Accessed via a door that originally led to the side yard, there is a therapeutic ambiance to the greenhouse with its bubbling water and fresh, earthy smell. Yet there’s no dirt to speak of.

Two fish tanks – 300 gallons each – hold large-mouth bass, sunfish and rainbow trout. Attila feeds the fish once a day The fish produce waste and ammonia, which is converted by microbes to a fertilizer for the plants. The plants then filter the water, which returns to the fish.

They obtained a permit from the DNR for their “private hatchery,” and now have about 200 bass and sunfish, 100 yellow perch and 30 rainbow trout.

Roz has cold-weather crops growing in the beds, which are filled with rocks and the nutrient-filled water. Some of the plants include various types of lettuce, kale, chives, green onions, rosemary, parsley and garlic.

“I stage the lettuce so that I’m not harvesting it all at once,” Roz said.

There are 100 or so strawberry plants that will likely start producing this summer, and as the weather warms up, Roz will plant squash and cucumbers. They’ll skip the tomatoes this year – maybe plant some outside in the dirt.

“Tomatoes are very greedy,” said Roz. “They suck up all the nutrients from the other plants.”

“After it’s set up, it really takes care of itself,” said Attila.

And every aquaponics system is different.

“Our system is unique because we work with what Mother Nature gives us,” said Roz, noting that they collect rain water in barrels to use in all of the tanks.

A power outage last summer during the Dan Patch Days weekend in June taught them that they needed a back-up system in the event of a power outage.

“We lost a lot of fish,” said Attila, explaining that the number of fish in the tanks producing waste without circulating water creates a toxic environment for the fish.

But it was a learning experience, they agreed. Now they have a generator, which was used last week when there was a half-day power outage in the downtown Savage area.

“We didn’t lose any fish,” Roz said with a smile.

Attila would like to increase the size of the operation some time down the road – maybe incorporating renewable energy from solar or wind methods.

Although they repurposed most of the materials that went into the greenhouse, the initial cost to build the addition was fairly significant.

“Some people say, ‘Oh, you could have bought a new car’ with what we spent,” said Attila.

“But we’ll get more mileage out of this,” Roz said.

The greenhouse adds an extra $20 to $30 per month onto their electric bill, which they think is reasonable.

And the time commitment isn’t overwhelming by any means. Attila estimated that they spend two-to-five hours per week feeding fish, cleaning filters, planting seeds and harvesting.

“Some people have a playhouse, I have a greenhouse,” laughed Roz.

And speaking of playing, their three boys are finding fun in aquaponics, too. Attila and Roz will attend the M.W. Savage Elementary Science Fair next week and show the basics of aquaponics on a small scale with a glass tank, goldfish and a small growing bed.

And, while the boys are just like other kids in most ways, the greenhouse operation has them thinking a little outside of the box.

“They play a game called Minecraft,” said Attila, noting that the game consists of building structures in an imaginary land. “Instead of building play areas, they build aquaponics greenhouses. The fish go here, the plants go there...”

Aquaponics is a synergistic growing technique in which fish and plants are grown together in a recirculating system. Water cycles between a fish tank and soilless plant grow beds. The fish waste feeds the growing plants, and the plants, in turn, clean and filter the water that returns to the fish environment.

View more photos, watch videos and learn more about the process of aquaponics

The couple will participate in the Tour de Tank May 15-18 when their greenhouse will be open to visitors.