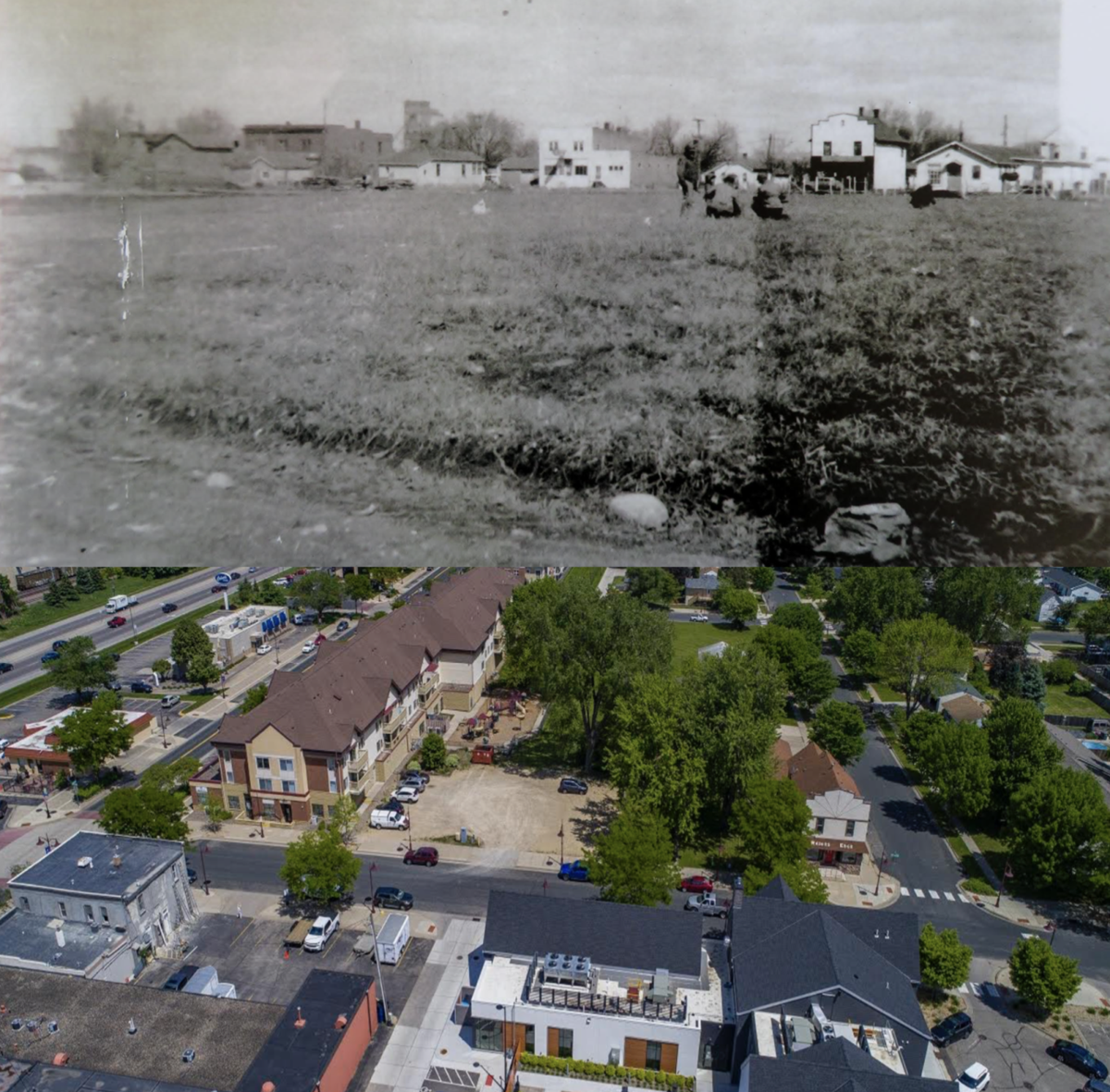 A drone photograph by Randy Monnens helps illustrate a century of changes in downtown Savage (Courtesy of the Burnsville Historical Society). 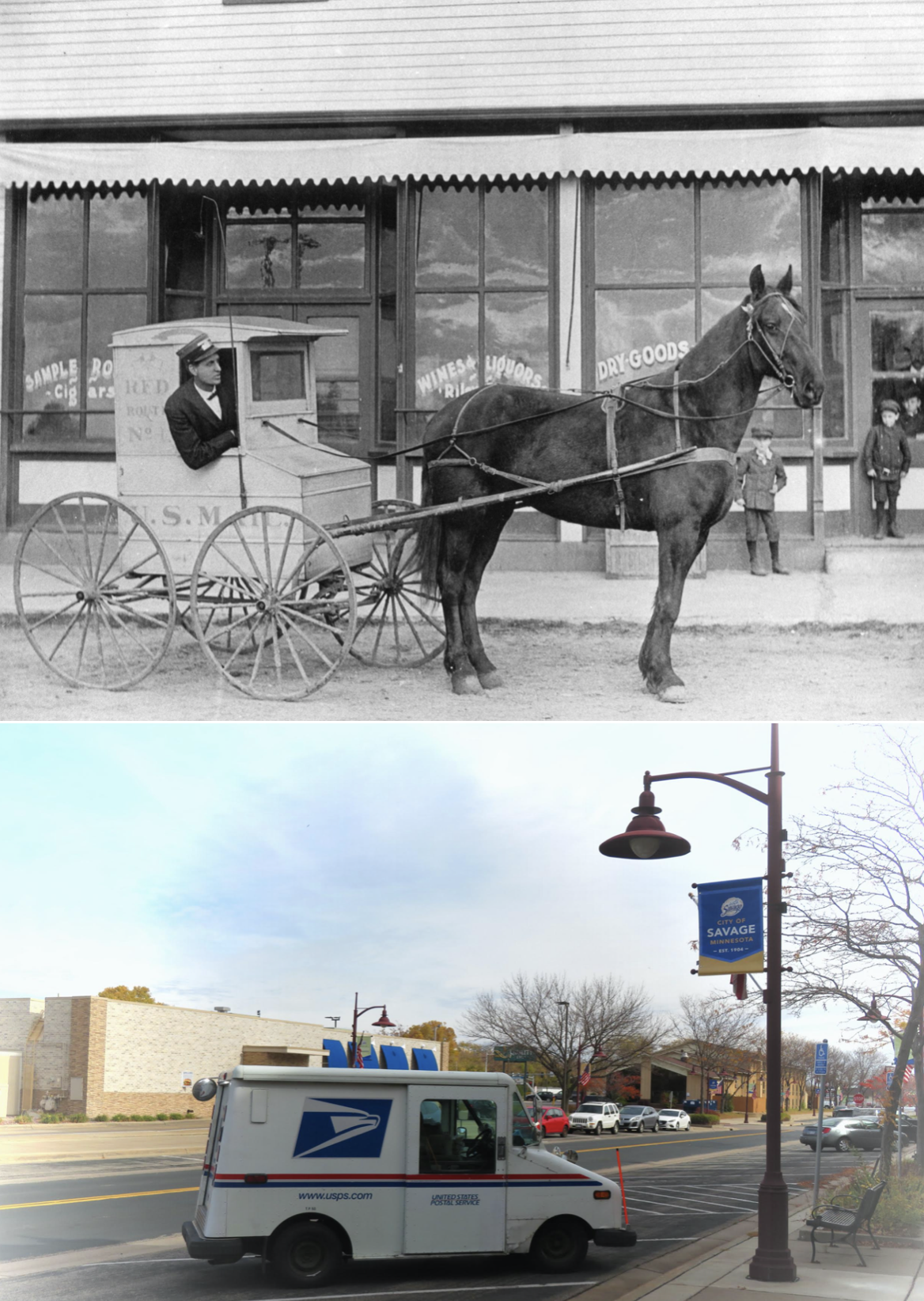 An old photograph shows a horse-drawn mail carrier in downtown Savage. A modern mail truck is shown in the same location as photographed by Jack Kennelly. (Burnsville Historical Society).

A drone photograph by Randy Monnens helps illustrate a century of changes in downtown Savage (Courtesy of the Burnsville Historical Society).

An old photograph shows a horse-drawn mail carrier in downtown Savage. A modern mail truck is shown in the same location as photographed by Jack Kennelly. (Burnsville Historical Society).

An online archive preserving the local history of Burnsville, Eagan and Savage grew tremendously during the pandemic thanks to the volunteer-led efforts of the Burnsville Historical Society.

More than 22,200 photographs and documents spanning over a century have been archived on the historical society’s website.

The history-buff behind the archive is Mendota Heights resident Jack Kennelly, a volunteer with the historical society.

“The Burnsville Historical Society has kind of come-and-gone in spurts,” said Kennelly, who grew up in Burnsville.

In the late 1960s, Richard Brooks with the Dakota County Library initiated the writing of a Burnsville history book — “Burnsville ‘76: A Community History.”

The mission behind the publication — to preserve Burnsville’s history with written text and photos — marked the “first inkling” of the Burnsville Historical Society, Kennelly explained.

For a handful of years, the organization published newsletters and created traveling displays. In 1999, another history book, “Burnsville 2000: A Community History”, hit the presses.

“It’s almost in some ways project-oriented,” said Kennelly, who describes himself as a ‘project volunteer’ with the Burnsville Historical Society.

Despite the humble title, his latest project — the web archive — has been a massive undertaking.

To find the best photographs, you need to know where to look; that’s sometimes a process of trial and error, Kennelly said.

A former manager of Burnsville Center once let Kennelly sift through old boxes of photographs, but the search was a bust. Kennelly left and told the manager they didn’t have anything he wanted to preserve.

“Six months later he called and said, ‘I found what you want,’” Kennelly recalled. His next visit turned up old aerial photographs and original mall brochures.

Searching for photographs among local families follows a similar process of trial-and-error.

“You always find one member of the family that is more interested in history than others,” Kennelly said.

During the COVID-19 pandemic, Kennelly said his work with the historical society took on new meaning as it helped him battle isolation.

“You’d get into fun conversations when we were in lockdown with people you’d never talk to,” he said.

The pandemic also gave Kennelly time to approach his hobby from new angles; he began subscribing to real estate alerts in search of the aerial photos added to property listings.

With permission, drone photos from roughly 25 different companies have been preserved in the archive.

Kennelly has also been busy capturing photos for the archive himself. Over the past year, he’s been creating a then-and-now series by photographing places today that are depicted in some of the archives oldest photos.

Looking to the future, Kennelly said the historical society isn’t looking for money, but rather hoping to further connect to local history.

“If people have pictures they’d like to see preserved of their life in Savage or Burnsville, we’d love to preserve it as well,” he said.

The archive can be found online at www.burnsvillehistory.org.