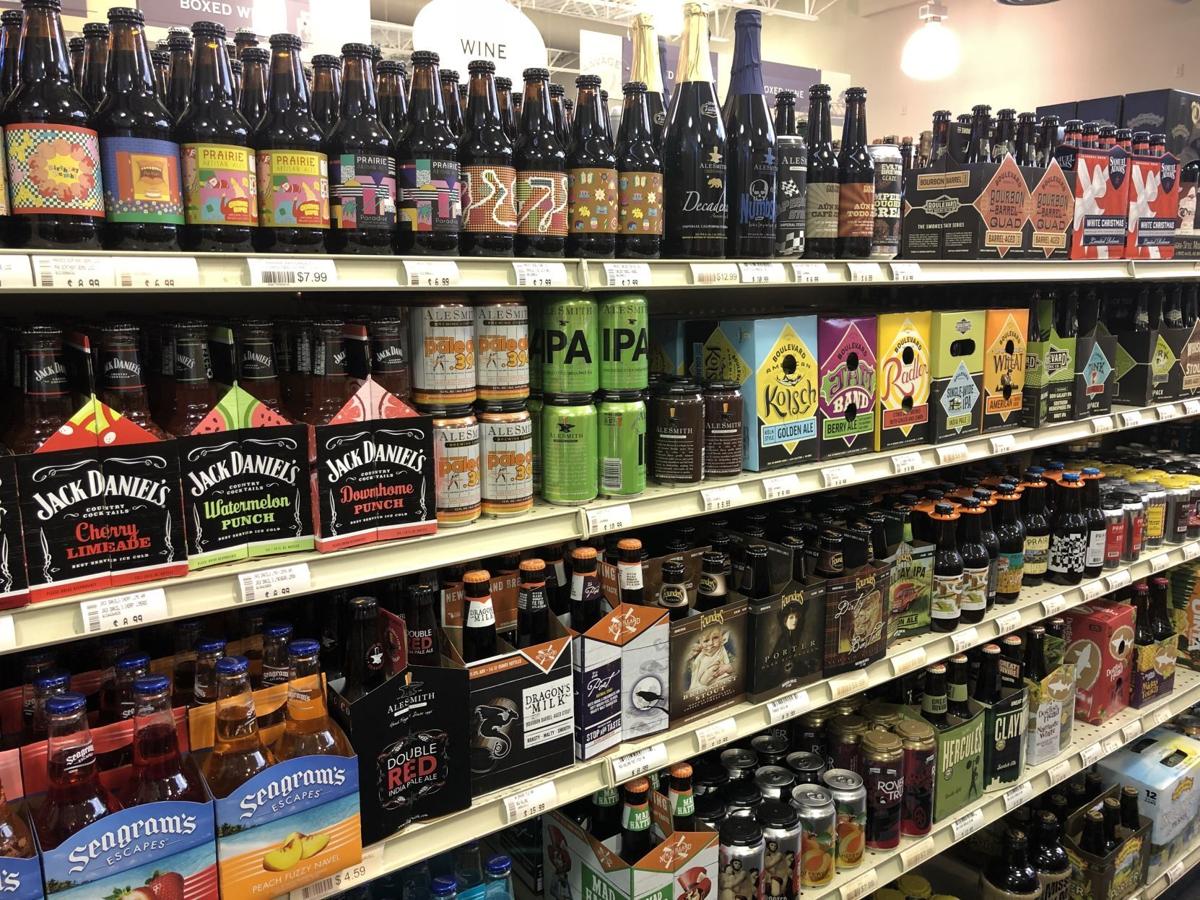 Savage’s municipal liquor operation had a successful year in 2020. The Savage City Council is now looking to put $400,000 from the liquor fund towards community projects. 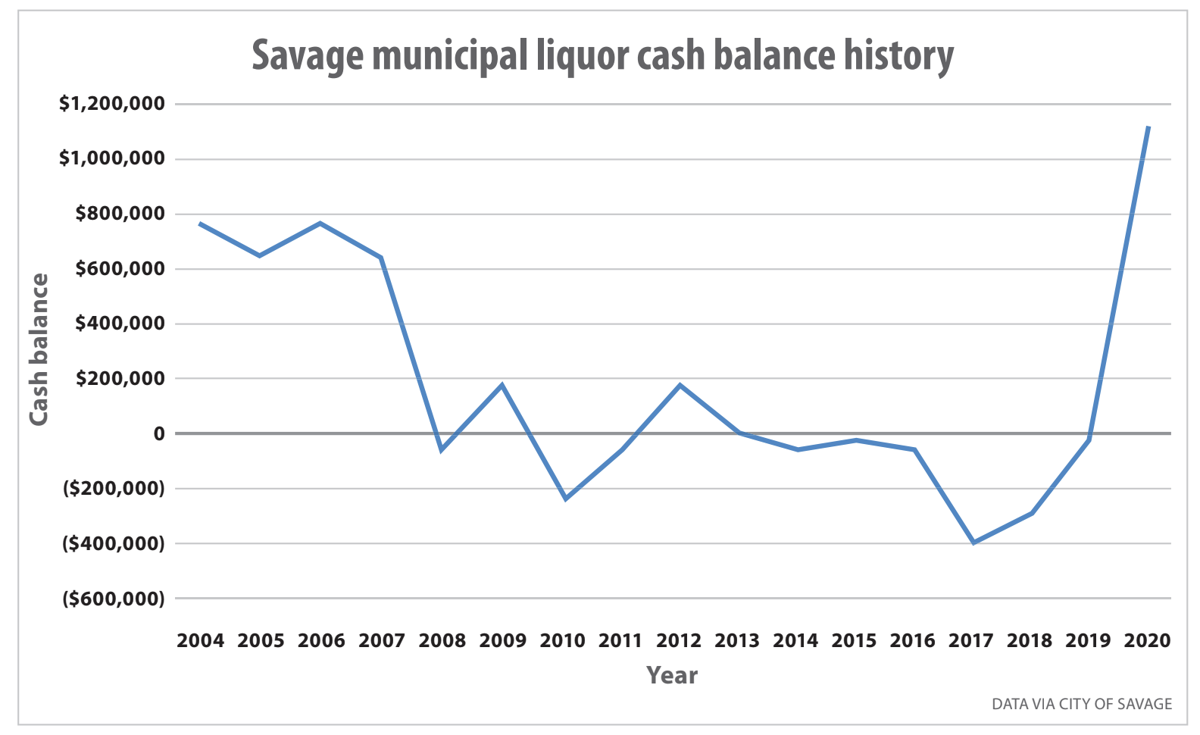 The success comes after several turbulent years for the city’s liquor operations, which underwent an overhaul in 2019 and cashed in on changed consumer habits during the pandemic.

The Savage City Council is now planning to authorize transferring liquor funds next month to benefit community amenities. It’ll mark the first transfer in over a decade.

Savage City Administrator Brad Larson recommended $400,000 be transferred out and spent at the council’s discretion.

Under the proposal, a positive cash balance of $115,000 will remain in the fund and $180,000 will be spent on liquor store maintenance projects, such as a roof replacement at Marketplace.

At the work session, the council supported spending $400,000 on four city projects. A formal vote is tentatively scheduled to be held at the March 1 meeting.

Around $158,000 is proposed to be allocated to Community Park.

A suspected arson fire destroyed the park’s playground in June 2020. The $158,000 amount represents the gap between the city’s budget for the rebuild and the dollars recouped through insurance and donations.

The playground design hasn’t been finalized, Boatman said, but two elements are locked in; the playground will have an accessible, poured-in-place rubber surface and a nature theme.

There are also plans to carve out an additional play area in the woods near the playground.

City officials are continuing to discuss building a “destination” playground somewhere in Savage.

Around $100,000 is proposed to be spent on constructing a Credit River-crossing trail in south Savage.

Boatman said the contribution of liquor funds would help the project move along faster. The city is also applying for a Department of Natural Resources trail grant.

The sloping topography in the area, and need to construct a bridge, make the project both expensive and complex, he said.

Currently, there’s a trail stub on Idaho Court that ends at the natural area.

The project being considered would continue the trail over the Credit River before spilling out onto County Road 27 near 154th Street.

State shutdowns led to approximately $150,000 in lost revenues at the Savage Sports Center, according to Larson.

During the work session this month, the council supported putting some of the liquor fund’s revenues toward the sports dome’s operations.

The sports dome is typically inflated each fall and taken down in May. Minimum-security prison inmates provide the labor through a Minnesota Department of Corrections program utilized by the city.

In 2020, the Institution Community Works Crews program was disrupted by COVID-19, and the city left the sports dome up year-round.

“We know the neighbors would like to see it down this summer,” Larson wrote in an email to the Savage Pacer this week, adding the city is planning to arrange for the dome to be taken down in May this year.

“We use a contractor who manages the ICWC crews,” Larson wrote. “The contractor knows the correct way to take the dome down, put it up, and store, it, etc.”

Financially, leaving the dome standing in 2020 was a “wash,” he added. The city saved dollars on dismantling the dome, but spent roughly the same amount on additional utilities.

The fourth proposed project supported by city officials will eventually pay for itself; install LED lights at some city buildings.

“We’d be spending money to save money in the long run,” Larson told the council.

Council members also reviewed a proposal to contribute funds to the city’s vehicle and equipment replacement program, but the proposal was rejected.

A few years ago, city officials considered ending the municipal liquor operation altogether after several years of failing to turn a profit.

In 2017, the Office of the State Auditor’s municipal liquor report revealed Savage had seen the third largest operating loss in the state; Finlayson, population 304, experienced the biggest loss, and Rush City, which came in second, folded their liquor operation mid-year.

No other municipal liquor operations in the seven-county metro had sustained losses that year.

In 2018, the city council held a state-mandated public hearing on the topic.

At the hearing, former city administrator and Savage resident Barry Stock urged the mayor and council members to continue the operation.

“I, too, sometimes struggle with why a city would be in this type of business,” Stock said. “However, as a taxpayer, if there’s any opportunity for the city to generate revenue which will reduce my taxes or provide amenities that I can benefit from — I’m there, I’m for it.”

City officials agreed to wait one year before revisiting the possibility of ending the operation, and they moved to tighten operating expenses by cutting liquor store staff time and eliminating some higher-paid positions. City staff also launched new marketing strategies.

By the end of 2019, things were looking up; the operation’s average number of sales, average sale per transaction and profit margins all rose during the year.

Soon after, a rush on grocery stores would bring a 240% increase in Savage’s liquor sales in the week of March 15 compared to the same week in 2019.

But before the pandemic’s impact could be anticipated, Larson told Council they were on track to make a transfer in 2021. He estimated the transfer would be in the amount of $50,000-$100,000.

Looking back, at the meeting this month, Council member Gene Abbott said he’s glad they stayed the course long enough to see the liquor operation benefit the community again.

There are 18 municipal liquor operations in the Twin Cities metro. In 2019, Savage’s was the only metro operation to not make a transfer of funds.

Lakeville also topped the list when ranked by gross sales in 2019, followed by Edina, Richfield, Eden Prairie and Apple Valley. Savage ranked 19th in 2019 with roughly $5.8 million in sales.

Statewide transfers in 2019 total around $20.8 million, according to the report.