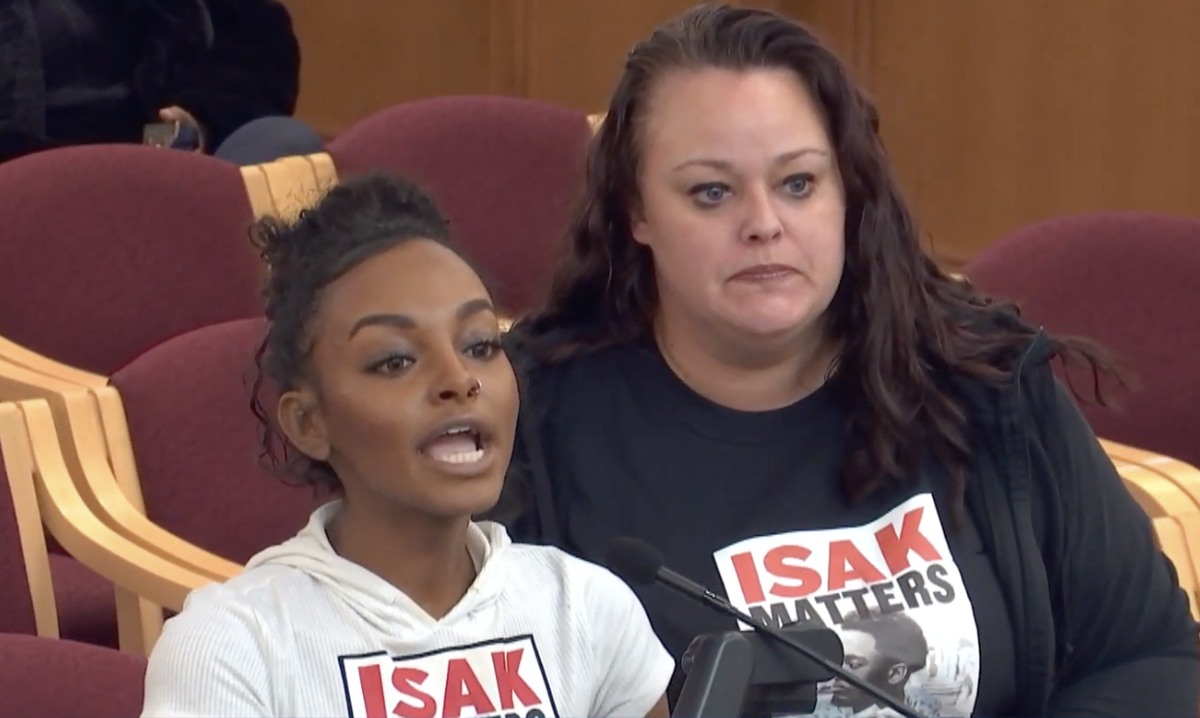 Protesters demanding the release of body camera footage related to an officer-involved shooting in July in Eagan shut down a Burnsville City Council meeting earlier this month.

Isak Aden, 23, died as a result of the incident.

Four officers from Bloomington and one officer from Eagan fired shots, according to the Minnesota Bureau of Criminal Apprehension, but officers from Burnsville and several other departments were also on scene.

Aden’s family members and supporters said city officials have disrespected their family and withheld public information by ignoring the data request they submitted in July.

Burnsville officials, meanwhile, said they’re following state law and standard practices by withholding the footage until the investigation is complete.

Aden was a full-time college student and credit union employee, family members said. He would have graduated this fall with an information technology degree.

“What I’m seeing here is negligence and frankly that you guys don’t even care,” Badrudin Aden, Aden’s brother, told the City Council Oct. 22.

“There is no issue going on in the city of Burnsville more important than the murders of our family members,” said Sumaya Aden, Aden’s sister, warning city officials the meeting would be disrupted if they weren’t given an answer regarding when they will get the recording.

Sumaya Aden said she had exhausted all other avenues to get the information and shouted at city officials and made verbal attacks on Burnsville Mayor Elizabeth Kautz. After 40 minutes of public comment, the meeting adjourned early after chanting and shouting erupted.

“It was very emotional, and the grief that Isak and Brian’s loved ones are feeling is unmistakable,” City Manager Melanie Mesko Lee wrote in an email.

Mesko Lee said the city forwarded the data request they received in July to the state bureau.

“It is my understanding that the BCA provided the family some of the information they requested at that time, and that the remainder was considered private until the conclusion of the investigation,” she wrote.

The city’s standard process is not to release evidence related to a matter under active investigation or in the process of review by the county attorney, Mesko Lee added.

“However, we have taken the feedback received to heart, and we will be reviewing processes within our control as they relate to responding to these types of circumstances in the future.”

Ashley Quinones, widow of Brian Quinones, who died in a police shooting after leading police on a chase from Edina to Richfield in September, also demanded police data at the meeting. Footage related to Quinones’ death has not be released while the investigation continues.

“I always say I don’t wish this upon anybody, but I honestly do,” Quinones said. “Because how else are you supposed to understand what we go through?”

During the council meeting, some claimed the city attorney or mayor had the authority to immediately release the data.

“That’s absolutely not true,” said Mark Anfinson, a data practices expert and attorney for the Minnesota Newspaper Association, which includes the Savage Pacer. “Clear and precise state law prohibits them from releasing the data while the case is active.”

However, state law does grant some authority to law enforcement agencies on the matter.

Under Minnesota Statute 13.82, subdivision 15, any law enforcement agency can release any data classified as confidential or nonpublic data under the law “to any person, agency, or the public if the agency determines that the access will aid the law enforcement process, promote public safety, or dispel widespread rumor or unrest.”

“That language is used very, very, very rarely,” Anfinson said, probably fewer than he could count on his fingers.

“Certainly if a City Council provides direction/preference for that release that could influence those entities’ decision,” she said in an email.

Minnesota Statute 13.825 subdivision 2, which relates to body cameras, provides narrow circumstances where the camera footage will be public immediately, Anfinson said. However, it wouldn’t apply in these circumstances because Burnsville Police Officers didn’t discharge their weapons.

All public records would be released once the case is closed.

The Bureau of Criminal Apprehension provided its findings but no recommended course of action to the Dakota County Attorney’s Office for review, said Jill Oliveira, a bureau spokeswoman.

“In cases involving a death caused by a law enforcement officer, our policy is to always offer to meet with family members and their attorney (if one has been retained) to discuss our decision in the case before any information is made public,” the Dakota County Attorney’s Office said in a statement, adding such a decision could come in the next several weeks.

The incident in July began when someone called 911 and said a man pointed a gun at her and threatened her in the area of Highway 13 and Burgundy Drive in Eagan, according to preliminary investigation details released by the bureau.

Aden fled a vehicle before officers arrived, and officers spotted him running into a small wooded area near Highway 13 and Silver Bell Road. Officers followed him to a parking lot next to business on Seneca Road.

They fired several shots after nearly four hours of negotiating with Aden to drop his firearm and surrender.

Officers provided medical aid, the report says, and Aden was taken by ambulance to Regions Hospital in St. Paul, where he died. Police said they found a handgun and cartridge casing next to Aden.