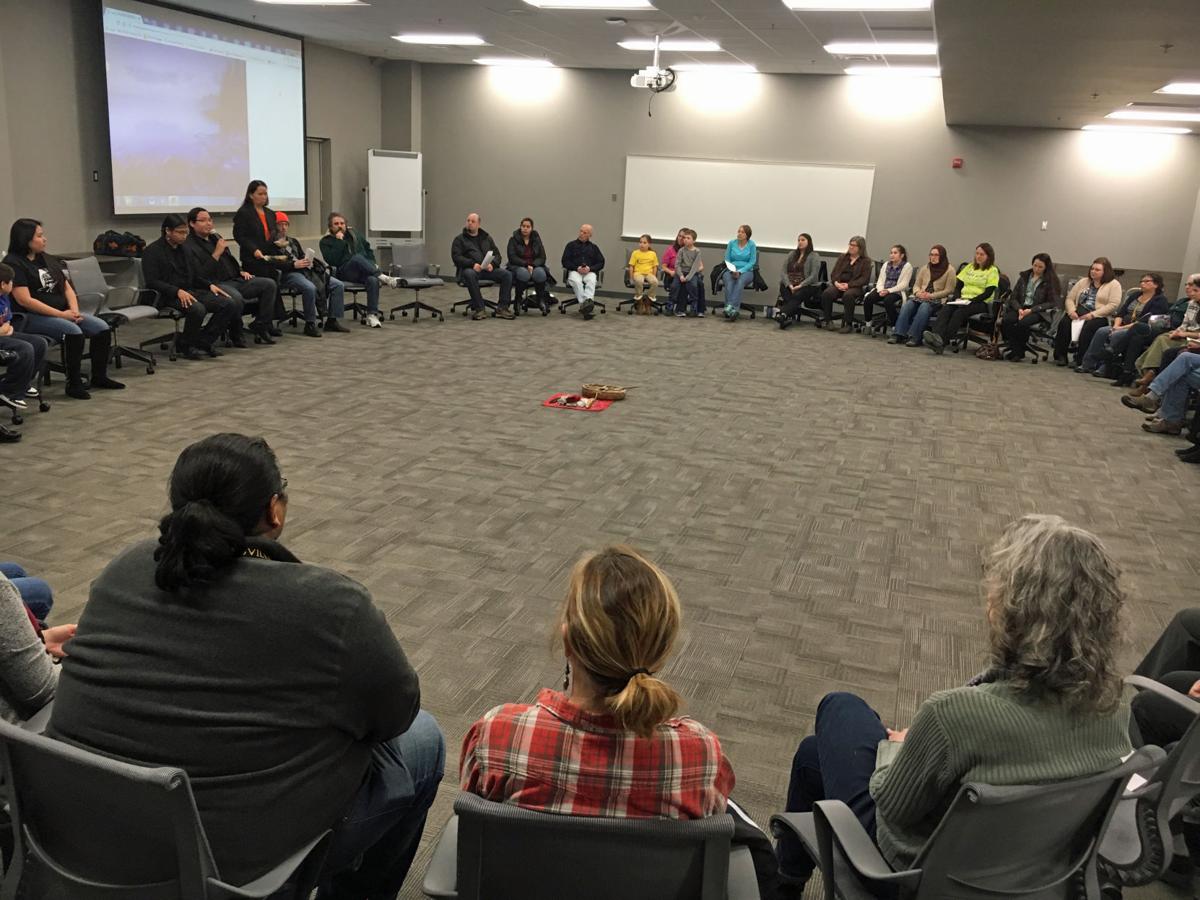 Top - Community members gathered at Diamondhead Education Center in Burnsville for an event called “The Sacredness of Water” on Tuesday, Feb. 7.

Above - School Board Chair Abigail Alt, left, and American Indian Parent Committee Secretary Jeana Stout, right, talk in a group discussion about the importance of water. 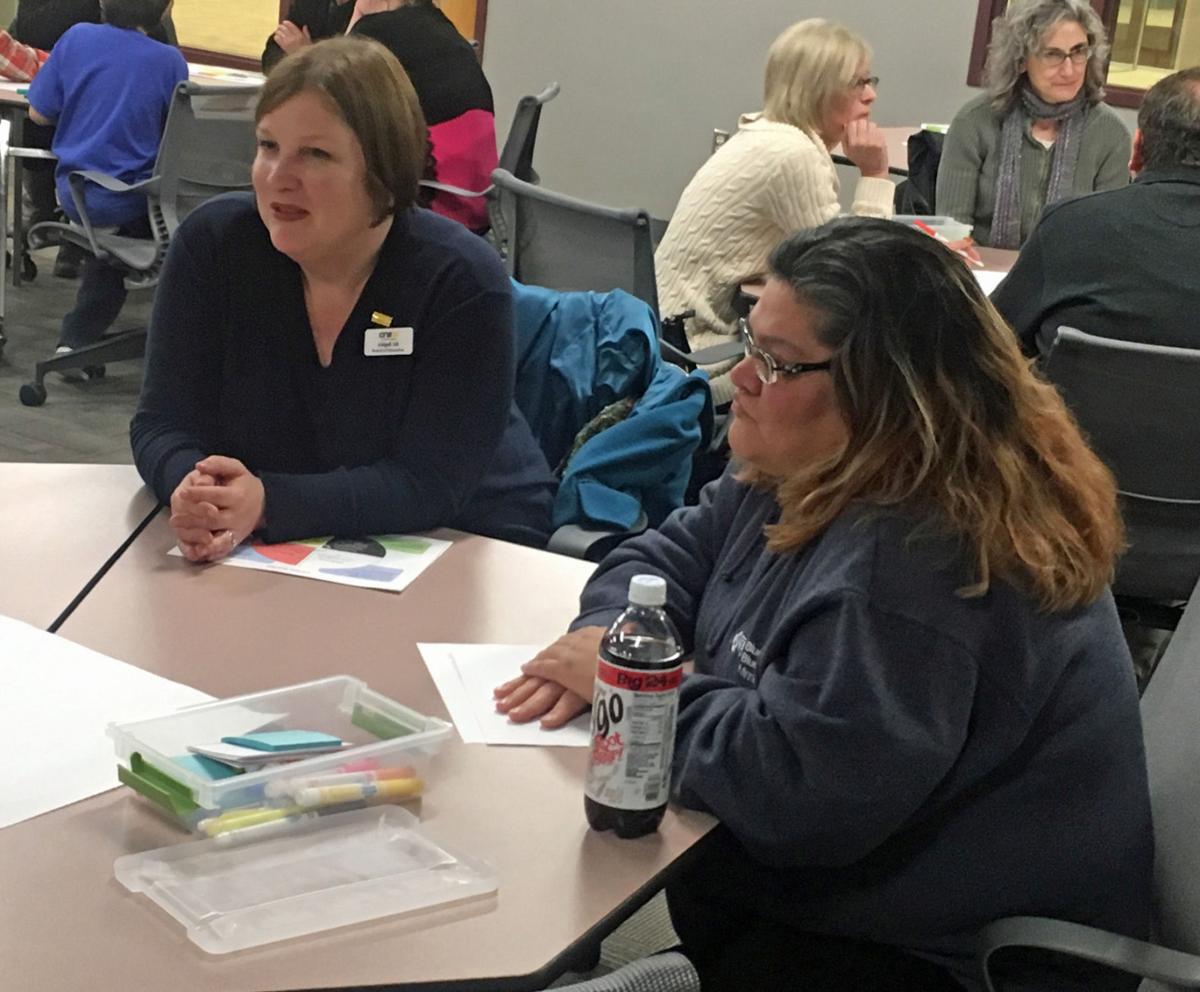 Burnsville-Eagan-Savage School Board Chair Abigail Alt, left, and American Indian Parent Committee Secretary Jeana Stout, right, talk in a group discussion about the importance of water. The discussion was part of an event called “The Sacredness of Water with LaPointe Tiwahe,” which took place on Tuesday, Feb. 7, at Diamondhead Education Center in Burnsville. 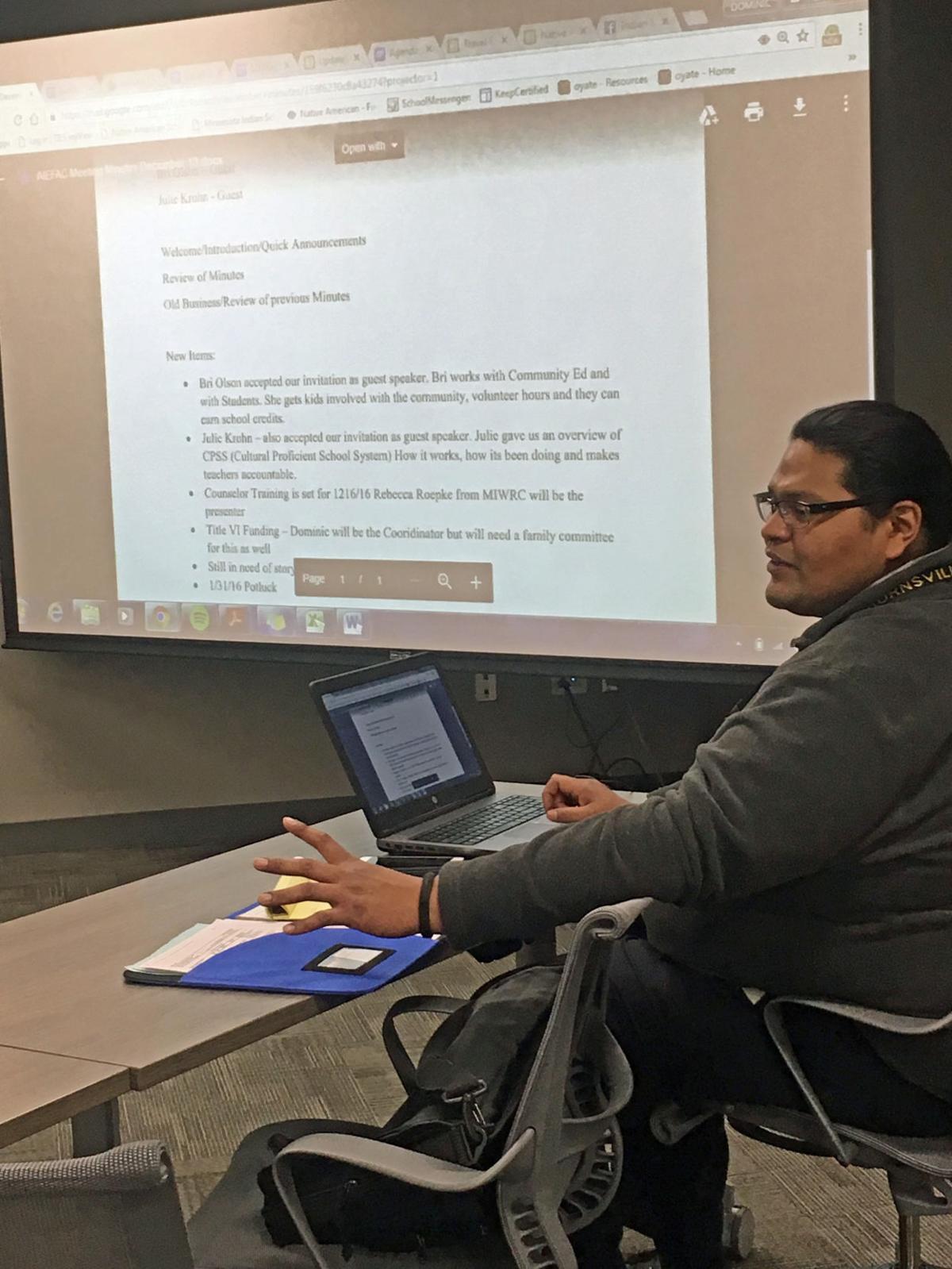 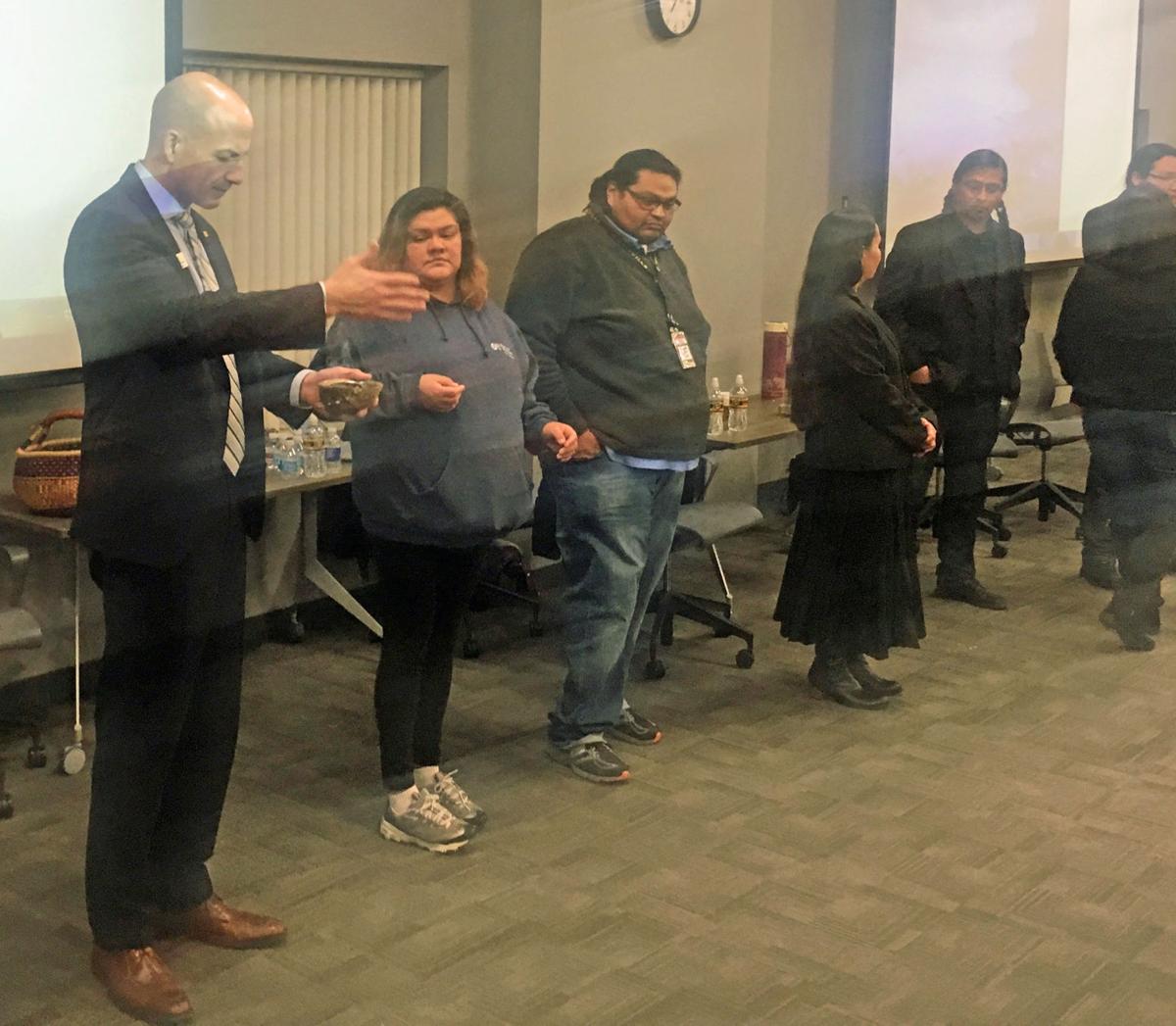 Superintendent Joe Gothard, left, wafts smudge smoke in a ritual at "The Sacredness of Water with LaPointe Tiwahe" on Tuesday, Feb. 7 in Burnsville.

Top - Community members gathered at Diamondhead Education Center in Burnsville for an event called “The Sacredness of Water” on Tuesday, Feb. 7.

Above - School Board Chair Abigail Alt, left, and American Indian Parent Committee Secretary Jeana Stout, right, talk in a group discussion about the importance of water.

Burnsville-Eagan-Savage School Board Chair Abigail Alt, left, and American Indian Parent Committee Secretary Jeana Stout, right, talk in a group discussion about the importance of water. The discussion was part of an event called “The Sacredness of Water with LaPointe Tiwahe,” which took place on Tuesday, Feb. 7, at Diamondhead Education Center in Burnsville.

Superintendent Joe Gothard, left, wafts smudge smoke in a ritual at "The Sacredness of Water with LaPointe Tiwahe" on Tuesday, Feb. 7 in Burnsville.

Just a little more than a year ago, relationships between the Burnsville-Eagan-Savage School District and the Native American community were tense.

“In my eyes I didn’t feel like the district... had our best interests in their thoughts,” said Jeana Stout, Savage resident and secretary of the American Indian Parent Committee.

Relationships were tense because the Native American population felt they had virtually no representation in the school district. There was little information about Native American culture and history in the curriculum or at events, and no cultural liaison was there to represent the community. All the while, people were talking about data that showed Minnesota Native American students fared worst in the nation. According to MinnCAN, an education policy and advocacy group, in 2013 the U.S. Department of Education ranked Minnesota last in the country for on-time Native American graduation rates.

He was hired last winter as a cultural liaison, and since then, parents and administrators say his work is making a difference. For example, District 191 School Board member Dan Luth publicly acknowledged at the Jan. 12 board meeting that Good Buffalo’s work has solidified the relationships between the district and the Native American community, which represents the smallest minority group in the district — there are approximately 86 Native American students currently enrolled.

“It pleases me to no end... that those communications and those relationships have been established,” Luth said, adding that “the results are right there, so thanks.”

On Tuesday, Feb. 7, a family of four gave an interactive presentation on the sacredness of water. The district-sponsored event — called “The Sacredness of Water with LaPointe Tiwahe” — was hosted at Diamondhead Education Center in Burnsville.

That night a group of parents, community members, school leaders and staff gathered in a circle, participating in a Native American cleansing ritual. They heard songs about healing and honoring the earth, they discussed the importance of water in small group discussions and watched a portion of a documentary made by one of the presenters, Tiana LaPointe.

The event was just one of many efforts Good Buffalo has made lately as he works to bring in cultural education such as this to the schools. He’s also forged a relationship with Native American bookstore Birchbark Books in Minneapolis, which he said helped in efforts to get authentic books and stories for kindergartners through third-graders. The district spent $20,000 on those books, Good Buffalo explained, “so they see themselves in the curriculum.”

This month, he plans to bring storytelling, drumming and singing to children for “I Love to Read Month,” which is recognized through the United States and Canada during February. In March they’re going to offer FIRE Academy classes for the Native American community, something that has already proven beneficial in the district's Latino and Somali communities. FIRE stands for Family Involvement for a Rich Education, and it educates parents on the American education system. Parents learn in this program how they can help their children succeed in school.

Good Buffalo also has worked with counselors and staff to offer training on Native American families and students, in conjunction with the Minnesota Indian Women’s Resource Center in Minneapolis, he said. Of particular importance has been educating people about historical trauma, he said, which is the “collective emotional psychological injury both over the lifespan and across generations, resulting from a cataclysmic history of genocide,” according to a handout given at the event on Feb. 7. Depression, alcohol abuse, domestic violence and high mortality rates are examples of the effects of historical trauma, the handout explained.

He’s also meeting with the American Indian Parent Committee each month and he started meeting regularly with kids at Burnsville High School. He’s also reigniting meetings between other school districts to gather Native American cultural liaisons who work south of the river, he said.

Good Buffalo said he has worked with children for 12 years and he said he wants to “serve as much as I can while I’m here and give back to my community.”

‘A world of difference’

Stacie Stanley, director of curriculum, instruction and support services at the district, said at the Jan. 12 school board meeting that parents had “serious concerns” only a year ago. In the time Good Buffalo was hired, family meetings are now more upbeat, she said, and relationships are much better.

“His presence and working with families and listening to them and following through and being transparent has made a world of difference,” she said.

Kristi Paavola, chair of the American Indian Parent Committee, said Good Buffalo has made a lot of progress in his time here.

“He has made great strides with the children within the school district,” Paavola said. “They now know they have someone they can talk to when it comes to their education and their culture. They have someone that’s championing for them in their corner.”

Still, more work needs to be done, she said, adding that she would like to see higher parent participation in the district. Anything from volunteering to going to school assemblies “would do great things,” she said.

Luth also said at the Jan. 12 board meeting that “we still have huge opportunities to do better,” and said that while they’re moving in the right direction, it’s important to stay grounded.

“It’s a long way that we’ve come, but it’s a beginning not an end here so to speak,” he said.