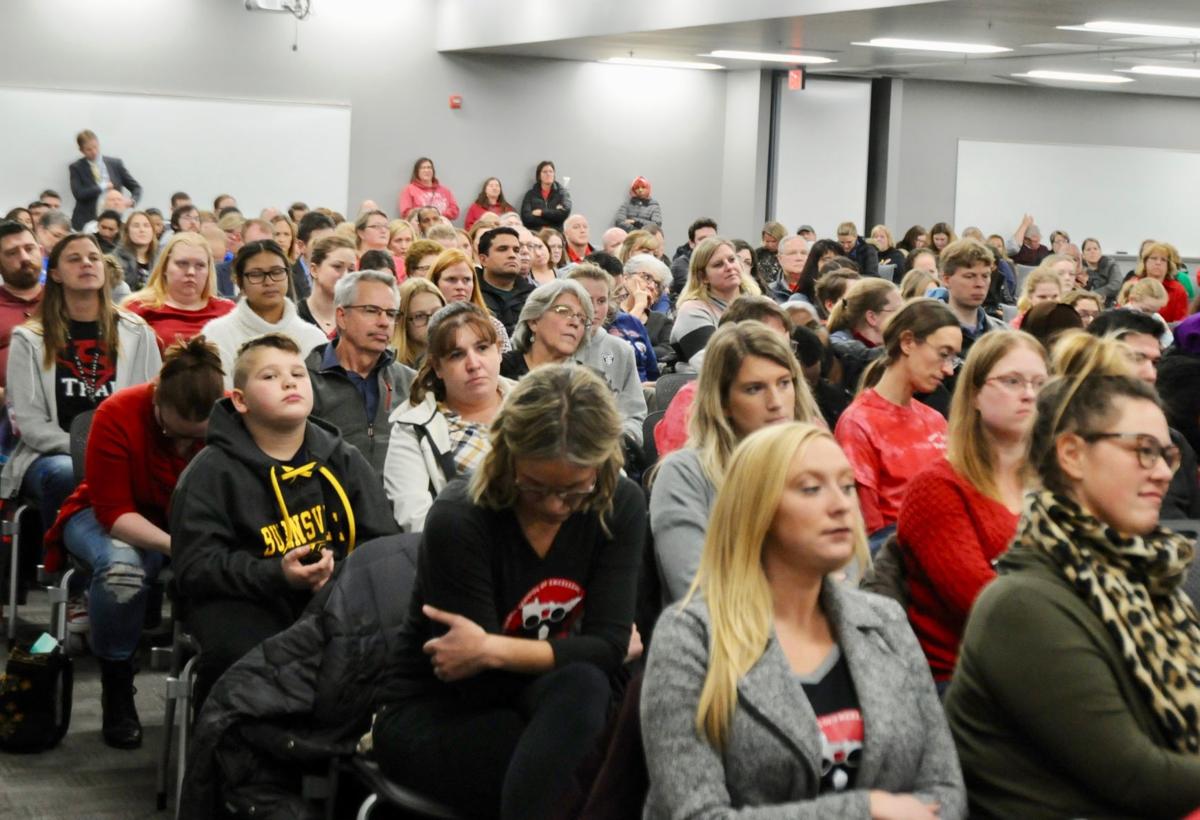 Around 200 community members attend the Burnsville-Eagan-Savage District Board of Education’s public hearing Dec. 4 to oppose plans to close three schools at the end of the year. The majority of speakers defended Sioux Trail Elementary School in particular. 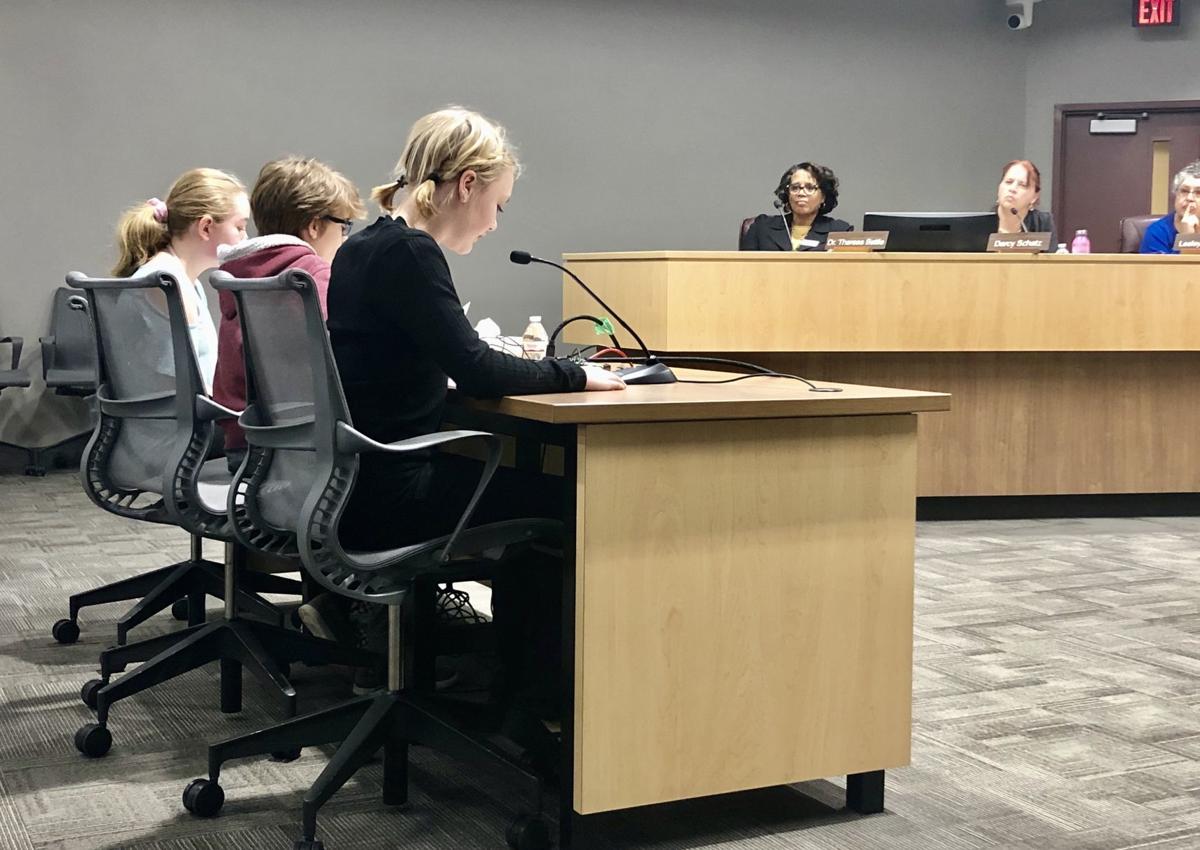 Around 200 community members attend the Burnsville-Eagan-Savage District Board of Education’s public hearing Dec. 4 to oppose plans to close three schools at the end of the year. The majority of speakers defended Sioux Trail Elementary School in particular.

An expert’s recommendation to close schools on the Burnsville-Eagan-Savage School District’s east side is deeply flawed, around 50 parents and teachers told the Board of Education Wednesday.

The majority of speakers at the board’s public hearing on the proposal said closing Sioux Trail Elementary School would be an irreparable loss to the district and would drive families to other districts. Several used the word catastrophic.

“What we have at Sioux Trail is not replicated anywhere else in this district,” teacher Leslie Horwart said.

The board will convene at a work session Dec. 10 before voting on the plan Dec. 12. The closures would be effective at the end of the current school year if approved.

The specific schools were announced in November after several months of additional analysis and public forums.

Around 93% of school faculty members and 68% of community members surveyed at a series of public meetings last month said the district has probable cause to close one or more schools, but 100% of speakers at the Dec. 4 hearing said the wrong schools were chosen.

Worner said the most important piece of criteria in selecting schools to close was geographic risk, or the likelihood that displaced students would open enroll out rather than moving to a different school within the district.

Choosing the wrong schools could mean more revenue lost to open enrollment than saved in the closures, the report states.

Worner said he considered Rahn Elementary in Eagan for closure but took it off of the list because it would be “highly vulnerable” to open enrollment.

Over 50 people spoke at the public hearing, and nearly every speaker said closing Sioux Trail and Metcalf would drive families to open enroll into the neighboring Rosemount-Apple Valley-Eagan District.

Residents said it didn’t make sense that schools on the fringes of the district were on the closing list given the concern over open enrollment.

Many also said the proposal didn’t protect against losing Rahn students, who might still leave the district if their nearby middle school, Metcalf, closed.

The North River Hills neighborhood in Burnsville had the most representation at the hearing. Several residents said they felt targeted by a proposal to close both of their neighborhood’s schools.

Several became choked up while telling the Board they’d started open enrollment paperwork.

Most speakers said Sioux Trail is the most successful school in the district, pointing to its Minnesota School of Excellence award from the Minnesota Elementary School Principals’ Association and to other recognition for the school’s Culturally Proficient School Systems efforts.

Test scores and other measures of academic achievement weren’t factored into Worner’s decision, but parents and staff said these numbers draw families to the district and to Sioux Trail in particular.

“To me, closing Sioux Trail is like firing your best employee,” district parent Shelly Conelly said. “It’s going to affect everybody in this district when these boundaries are redrawn.”

Only a handful of speakers made a case to keep to M.W. Savage open.

Savage resident and second-grade teacher Annie Jarzyna-Ingles said M.W. Savage is a pillar of the community, and its closure would lead more families to attend Prior Lake-Savage Area Schools.

Savage Mayor Janet Williams didn’t speak at the hearing but later said she’s saddened by the recommendation and shares the open enrollment concerns expressed by others, though she respects the Board’s authority to ultimately decide.

Williams said the arguments made about Sioux Trail also apply to M.W. Savage; both are neighborhood schools with an important place in their town’s history.

Resident Jesse Ortman said none of the schools should close. The under-utilized space could be used for something that generates revenue — he offered “Sioux Trail Coffee Company” as a suggestion.

“Let’s not take the report as gospel and do it,” he said.

The Burnsville-Eagan-Savage Board of Education will vote tomorrow on whether to close Sioux Trail Elementary, M.W. Savage Elementary and Metca…