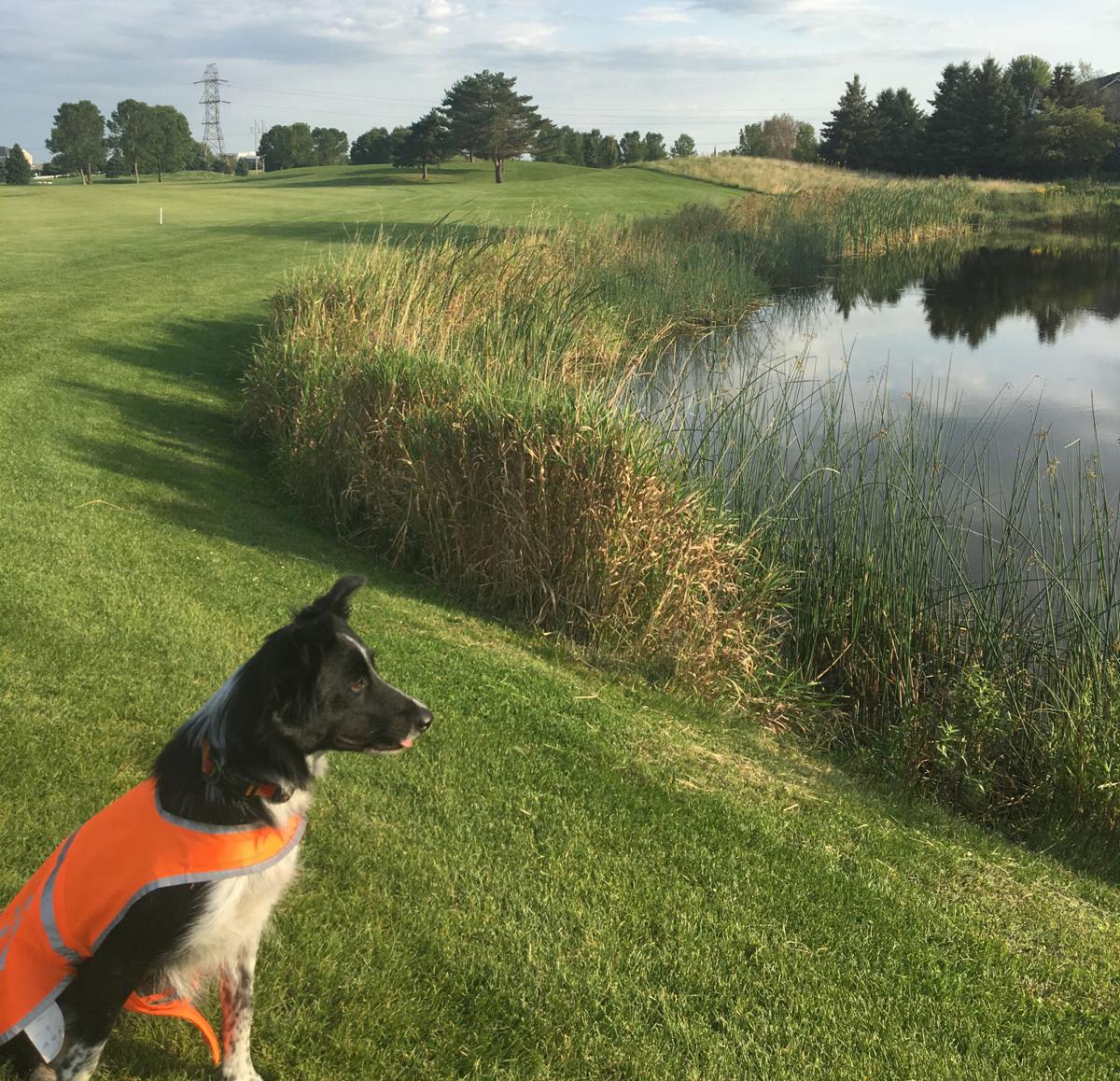 Goose the collie works at Driven Wild Goose Control. Her job: to chase geese. It’s a pretty cushy gig for a collie. 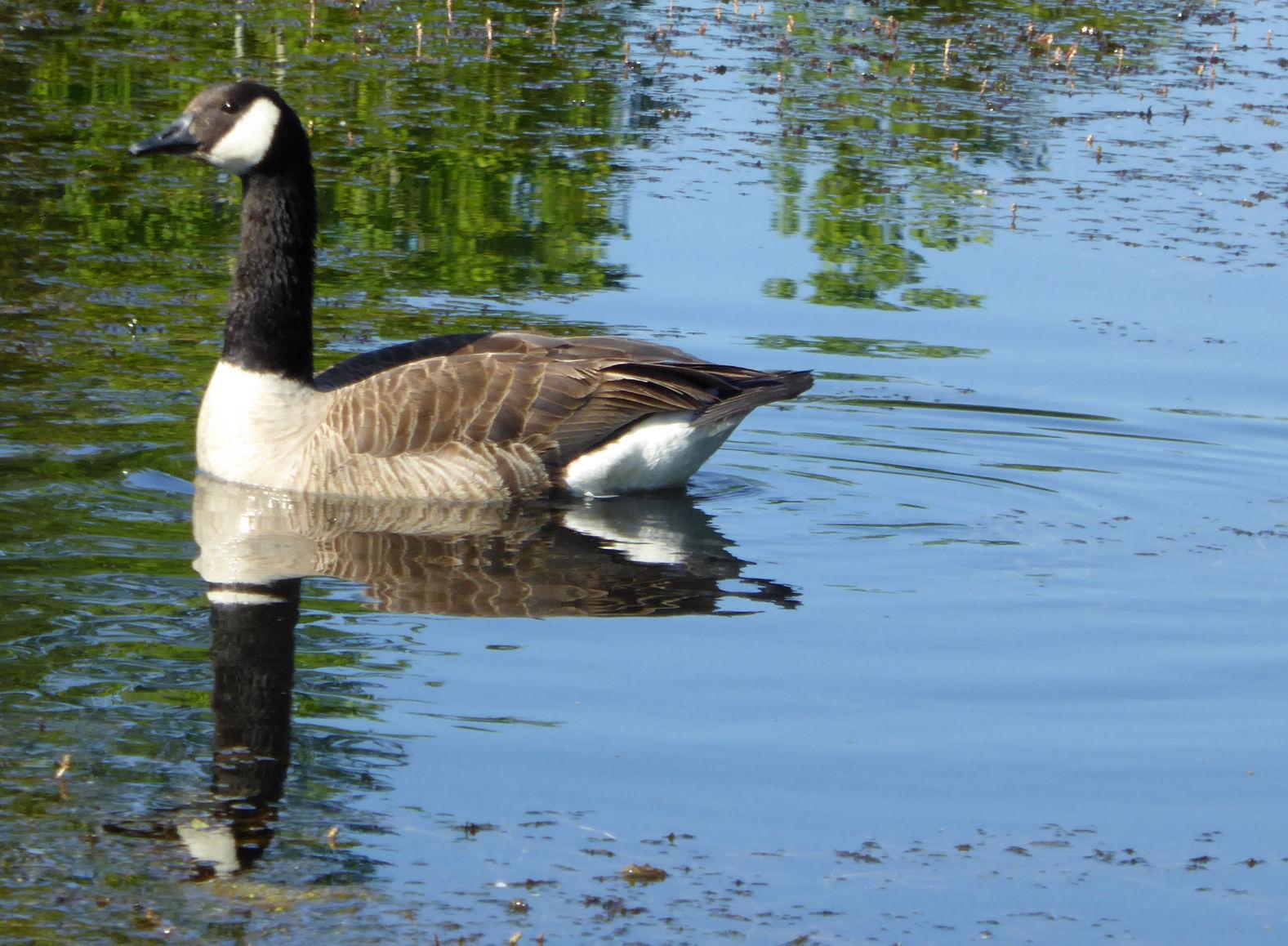 A Canada goose enjoys the still water at Lakefront Park.

Goose the collie works at Driven Wild Goose Control. Her job: to chase geese. It’s a pretty cushy gig for a collie.

A Canada goose enjoys the still water at Lakefront Park.

Dwayne Stich of Prior Lake is worried that he isn’t hearing as much honking lately.

Around this time of year, he’d normally hear Canada geese mustering, calling to one another as they prepared to ship out for the winter. This year, they’ve been “largely silenced.”

“I remember awhile ago, there were too many geese, and the golf courses were complaining,” he said. He doesn’t know if that had anything to do with the geese seemingly disappearing, but he feels like he hears gunfire all the time.

Stich isn’t totally off base. Many golf courses do have permits to get rid of geese through the Minnesota Department of Natural Resources, and one of the ways they do it is good old-fashioned shooting.

“There are permits available that some golf courses get,” said Steve Cordt, the department’s waterfowl staff specialist. Golf courses, homeowners, lake associations — they can all get permits to lower their overall goose quotient. Geese can have a pretty devastating impact on corn and soybeans, and on water quality and golf course cleanliness. When a swimming beach is closed for a while due to unsafe E. coli levels, geese are generally the reason.

However, according to Diana Regenscheid, the department’s area wildlife supervisor, only Carver County and the Hazeltine National Golf Club in Chaska have applied for permits this year. Some parks and courses do cross over and apply for permits with other area supervisors, so it’s possible other entities in the area have their own permits.

“In order to get a permit, they have to have a management plan in place,” she said. Over time, she expects more and more municipalities to apply. Geese are still as pervasive in Minnesota as dessert bar recipes and road construction.

It may surprise the average Minnesotan to learn that 100 years ago, Canada geese were driven nearly to extinction. The Migratory Bird Treaty Act of 1918 protected their numbers by preventing the hunting of migratory birds outside of established seasons. By 1980, they’d gone from the brink of disappearing to being one of the most hated birds in the state. Some evidence to the fact: an article written for The Dodo titled, “Why are geese such assholes?” and a 200-member Facebook group simply named “I Hate the Canada Goose.”

Of course, Stich’s concern for his feathered neighbors also shows there’s some love out there for the Canada goose, and some questions about what might be happening to them. Essentially, here’s what:

Goose control can happen any number of ways: hunting, deterring the geese from nesting, grabbing the nests and eggs in the spring, even “rounding up” goslings in summer. Those goslings, Cordt said, are usually processed and given to food banks.

“That’s the one I do get some calls on,” he said. “People wonder what happen to them.”

The Three Rivers Park District has managed their geese this way in the past. In the past three years, they’ve done two goose roundups, according to John Moriarty, who has worked with the parks district for about 15 years.

“Our first line of defense is harassment,” he said. “Harassment,” in this case, pretty much amounts to throwing specialized firecrackers at geese or firing them overhead. The noise is intended to scare them off. They also open up a couple of parks to goose hunting — not so they can kill off the excess, but so they can alert the geese that this is not a safe place for them to hang out. In some locations, they do nest addling, which involves pouring oil over goose eggs so they never hatch.

And, usually in one location a year, they do round-ups of the summer goslings. Yes, Moriarty said, they are euthanized, and yes, they do go to local food shelves.

The fact is, geese are everywhere, and they’re not great for parks and waterbodies. In spite of the management tactics, quite a few Three Rivers Parks still have a lot of geese hanging around all season.

“We’ve occasionally had to shut down beaches for a number of weeks,” Moriarty said. The picnic areas by the golf courses get bad too, he said. Nobody wants to walk through layers of goose poop.

Meanwhile, Carver County parks are making their own attempts at goose control. Sam Pertz is Carver’s parks and trails supervisor, and he helped Carver County put a goose management plan in place in June 2016. Their goal isn’t to manage the goose population, he said, only to keep parks and facilities clean, safe and frankly, “desirable.”

“We get a permit every year from the DNR,” he said. They contract with Canada Goose Management and have a few deterrents in place to discourage local geese settling in. This year, they’ve tried a few new tactics, including a flashing light meant to disturb geese’s eyesight and prevent them from nesting nearby, and a sort of grape-based spray application for turf.

Pertz said the jury’s still out on whether or not these new tactics work. In the universe of the “Home Alone” movies, it definitely would be. But they’re just up against so many geese it’s hard to tell if they’re making any headway.

“I personally think the goose population is on the verge of out of control,” he said. “In our park areas, it’s hard to say how we’re doing.”

Other services offer to control geese by introducing one of the best deterrents out there: a natural predator. That’s the philosophy behind Leah Kulsrud’s company, Driven Wild Goose Control. Predators, she said, tend to have more lasting effects than lasers and decoys or even removal.

The “natural predators” in question are actually a couple of dogs, who regularly chase the geese out of clients’ parks and golf courses. Their names: Duke, and ironically, Goose.

According to Cordt, just because geese are being managed this way doesn’t mean goosekind is suffering too badly.

“Statewide, they’re doing well,” he said. “The population based on the surveys we’ve been doing has been pretty stable for the past 10 years.”

However, Cordt said he really couldn’t speak for what’s going on in specific parts of the state. In a given small area, he said, their numbers could be considerably lower.

Of course, the absence of geese doesn’t always mean somebody finally got tired of them and took matters into their own hands. Geese are, as a species, a mobile bunch. As their young grow and develop over the summer, they’ll travel from lake to lake, looking for the right resources.

“A lot of times when people ask, ‘What did you do with the geese?’ it’s because they’ve moved on,” Moriarty said. And if the Department of Natural Resources’ numbers are any indication, they’re not going too far.