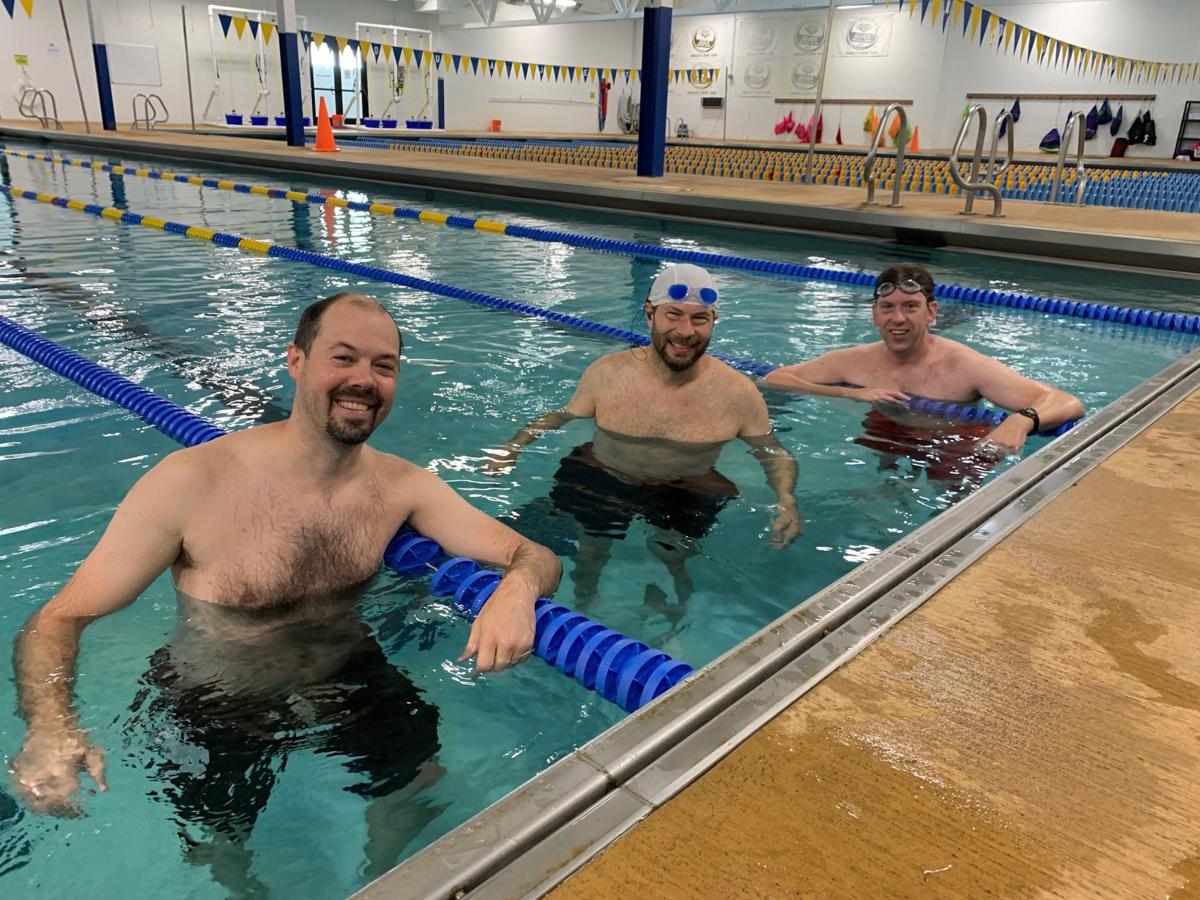 Savage resident Todd Millenacker and his friends Pete Davich and Casey Black each swam nine miles at the Foss Swim School in Eden Prairie on July 14 to replicate swimming the English Channel. Davich, Millenacker and Black are pictured here left to right. 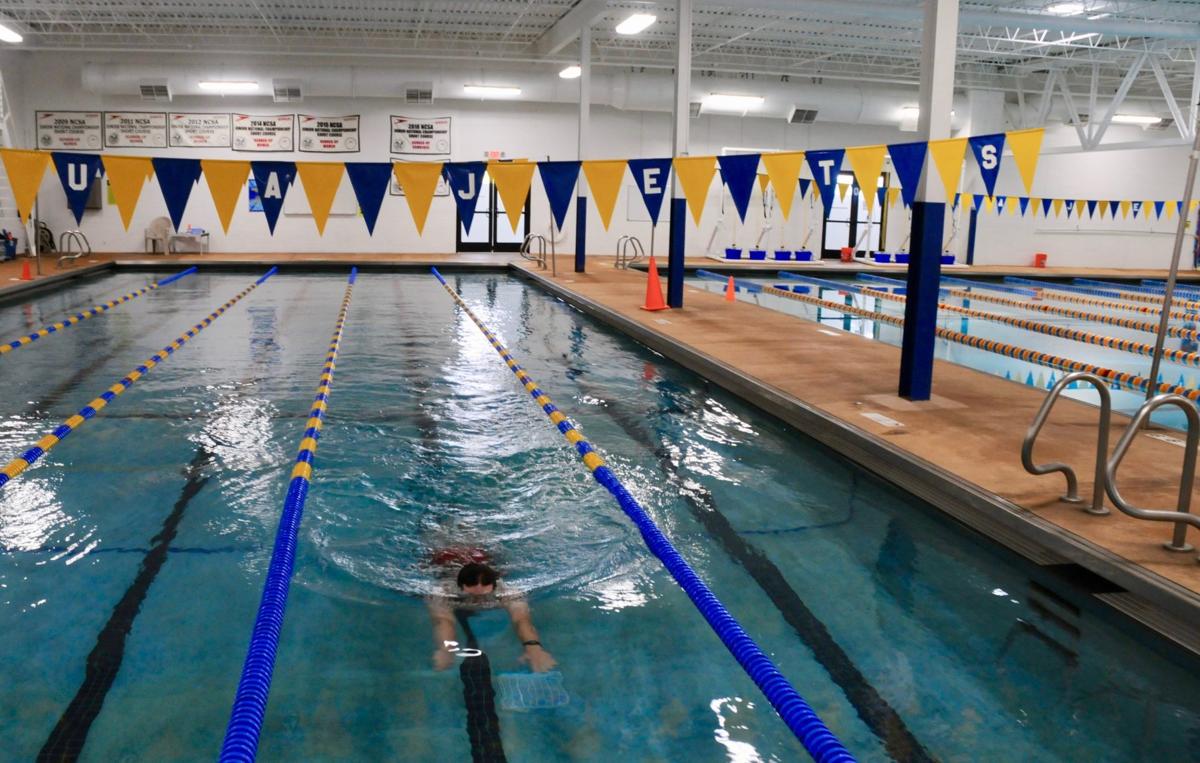 Savage resident Todd Millenacker and his friends Pete Davich and Casey Black each swam nine miles on July 14 to replicate swimming the English Channel. They completed the challenge one year after replicating a hike up Mount Everest.

Savage resident Todd Millenacker and his friends Pete Davich and Casey Black each swam nine miles at the Foss Swim School in Eden Prairie on July 14 to replicate swimming the English Channel. Davich, Millenacker and Black are pictured here left to right.

Savage resident Todd Millenacker and his friends Pete Davich and Casey Black each swam nine miles on July 14 to replicate swimming the English Channel. They completed the challenge one year after replicating a hike up Mount Everest.

Savage resident Todd Millenacker, 40, was reading a book on Mount Everest when he thought it really can’t be that hard.

He and his friends gave it a try one year ago. After 96 laps up and down the tallest peak of the Hyland Hills Ski Area in Bloomington, they completed the 29,000-foot climb, in a way.

“My heel is finally healing from that one,” Millenacker joked recently.

This month, he organized and completed their next challenge: swimming the English Channel.

“Are we trying to flee England to go to France, or do we not like France and want to get to England?” Millenacker asked friends Pete Davich and Casey Black as they stood around eating pizza Sunday afternoon at the Foss Swim School in Eden Prairie.

The group gathered at the pool with a plan to swim nine miles each and collectively match the 21-mile English Channel’s width.

They don’t try to convince anyone their “edited-down, stupid, fun version” replicates the real thing, but that’s not the point, Millenacker said.

The Channel Swimming Association’s list of official regulations says swimmers can’t wear wetsuits and a boat must escort swimmers across. Less than 2,000 people have completed the swim under those rules.

Millenacker is an endurance athlete; he ran from a Culver’s in Albertville to his cabin in Alexandria in May, for example. The 101-mile run took him less than 36 hours, counting a hotel stay and stops along the way for things such as Powerade, Hostess Donuts and Milky Ways.

“The adventure was a lot of fun,” he said. “Of course, that might depend on your definition of fun, but I’m already thinking about doing it again next year.”

Outside of being an athlete, Millenacker works in an office as a freight broker. Also a musician, he’s found success as a jingle writer and landed a rare opportunity to write tunes for Little Caesars pizza commercials.

“He’s just driven and wants to go above and beyond,” said his high school sweetheart and wife, Laura Millenacker.

She supplied the pizza at the pool and talks about her husband’s athletic feats with an eye roll and a bit of sarcasm.

At the end of the day, she said, she hopes his dedication inspires others to train for something they want to achieve. She joked that he took things too far when he went for a run on Highway 169.

Todd Millenacker said Davich and Black, both engineers and marathon-runners, “kind of get roped into my crazy antics.” Davich and Millenacker have been friends since high school, and they met Black years ago at church.

When asked why they’d do something like this for an afternoon, Davich and Black gestured toward their kids, who were tossing each other to the ground and occasionally being told not to shake the vending machine, and joked they’d do anything to get away for a little while.

Davich departed the pizza break early to get back to swimming. By this time, another friend had arrived to take over the official role of sitting poolside and tallying laps on a sheet on paper.

Millenacker, still eating pizza, called Davich the group’s dark horse. He didn’t train for the event and didn’t want to spend money on waterproof headphones. While the others listened to National Public Radio podcasts and music, Davich was left to his thoughts.

The other two kept a poolside assortment of candy, but Davich stopped periodically to eat walnuts and sunflower seeds.

Once back in the pool, Millenacker said he’d decided they were leaving behind pastries in France for better music in England.

After approximately seven hours, they made it to the other side.

So what’s next? He said they’ll think of something.

He even threw around the idea of spending six days in their bathroom pretending to be astronauts going to the moon.

They didn’t want this idea committed to writing, but Davich suggested wearing tin foil hats if they do embark on the mission.