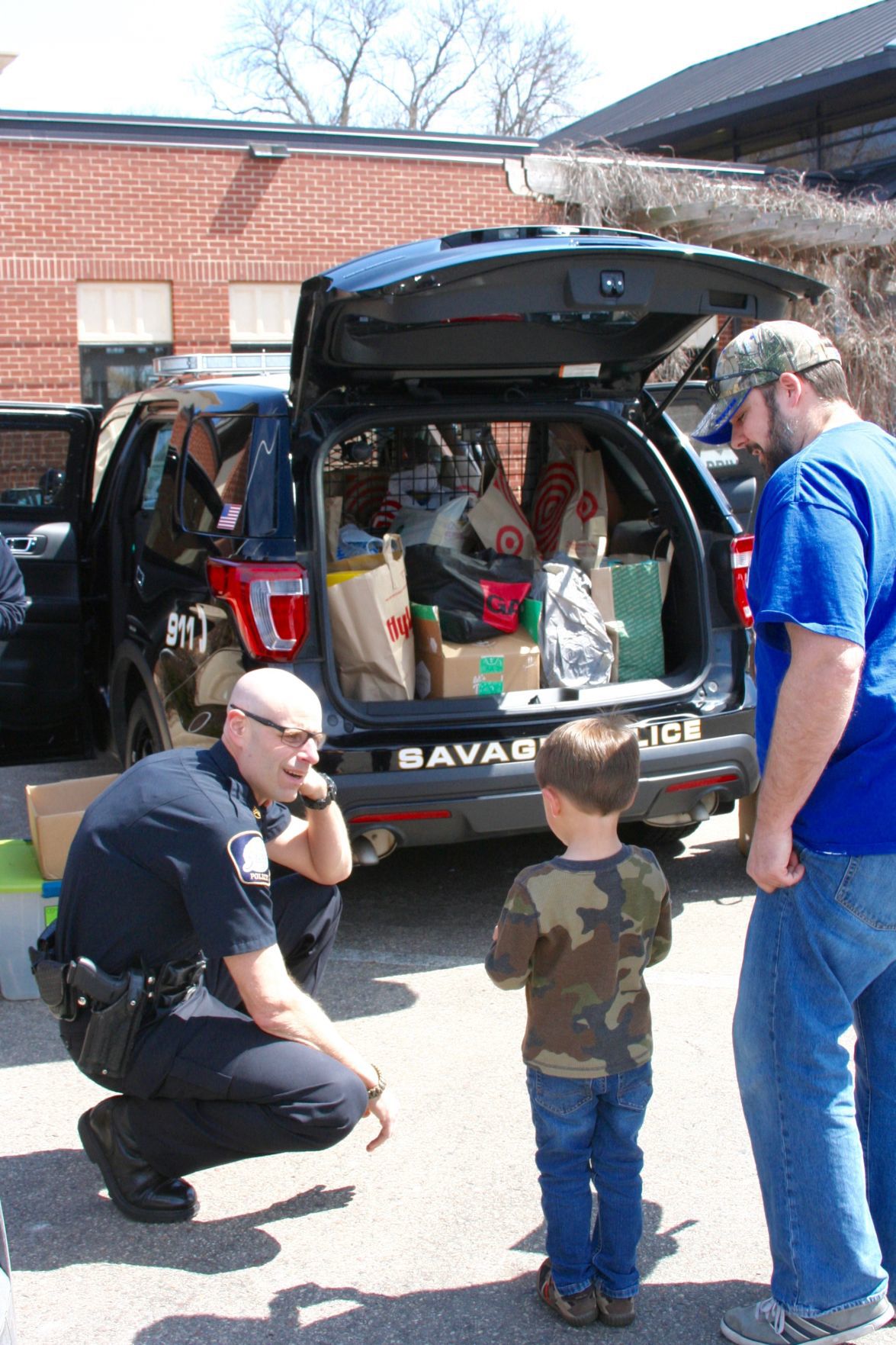 Savage Police Sgt. Patrick Mans, left, greets volunteers and loads food donations into the back of a squad car outside of the Savage Police Department during Service Day Saturday on April 21, 2018. 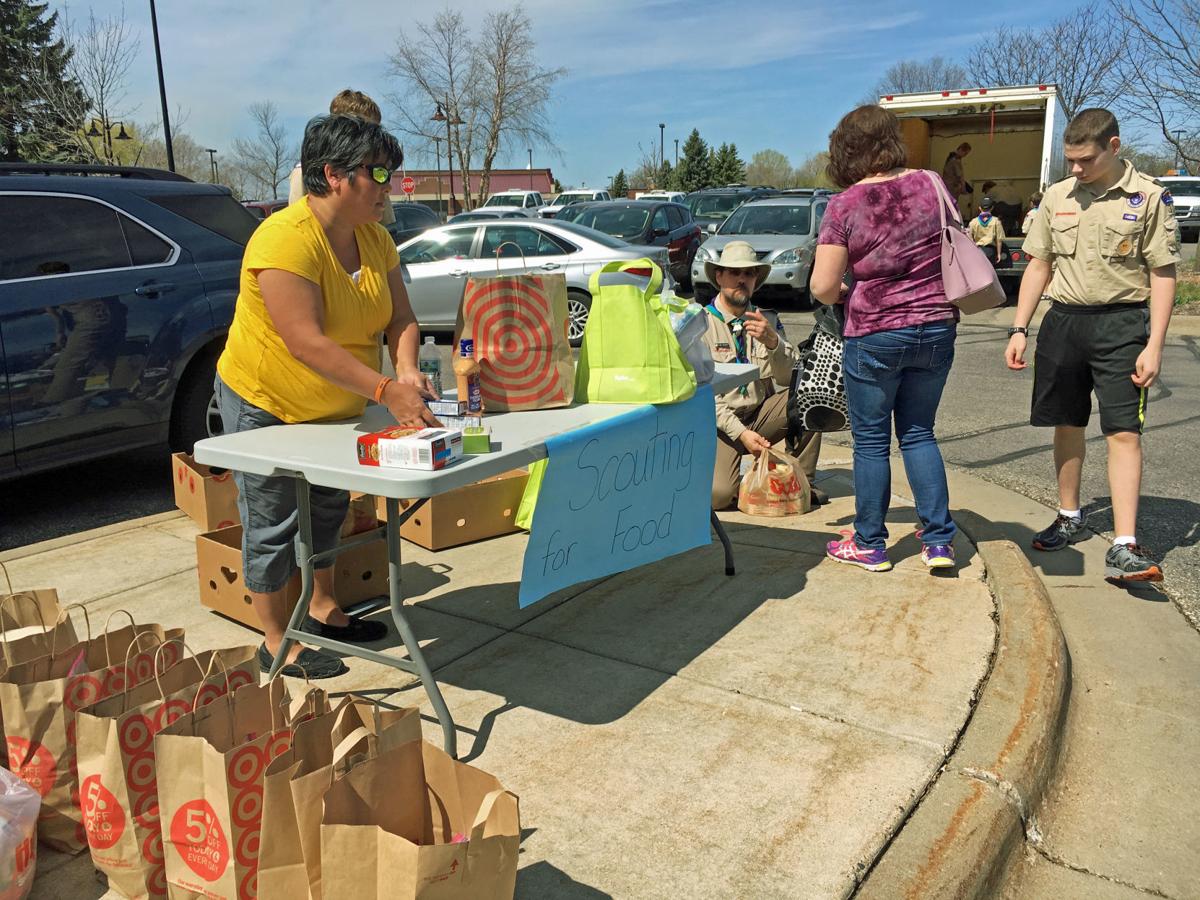 Savage Police Sgt. Patrick Mans, left, greets volunteers and loads food donations into the back of a squad car outside of the Savage Police Department during Service Day Saturday on April 21, 2018.

As usual, it’ll essentially be a one-stop shop to contribute to or learn about dozens of nonprofits and other area organizations, said Shrey Pothini, a Burnsville High School freshman who founded the event.

Participants can come at their leisure and, say, donate blood to the American Red Cross and register to vote, or they could drop off and pack donated food and other items for the CAP Agency or Avenues for Homeless Youth.

They could also meet some pets up for adoption from Matty’s Heart & Soul Animal Rescue before eating a free lunch and snacks from the Savage Fire Department and Savage Senior Living at Fen Pointe while learning about CPR or decorating Meals on Wheels lunch bags.

Or they can do all of those things and more.

The big idea is to bring together charity groups and the broader community and show that anyone of any age can help others, Shrey said.

“The younger you start, the more excited you’ll be towards it” — and the more likely that volunteering will continue, he added, pointing to himself as one example. Shrey started collecting towels for a homeless youth shelter in Minneapolis before he even reached school age, a separate event that still happens yearly.

But Service Day also doesn’t need to rally an army of constant volunteers to be worthwhile, Shrey added. Organizers estimated 1,500 people attended last year and donated more than two tons of food and contributed hundreds of pairs of shoes and other items for people in need.

“Even if it’s something people do once a year, they’re still doing something,” Shrey said.

Several hundred homeless young people a year use the dental kits and detergent packs that come from Service Day volunteers, said Katherine Meerse, executive director for Avenues for Homeless Youth in Minneapolis. The organization provides shelter and housing, case management and other services for people ages 16-24 from around the region.

“They’re often coming in with very little possessions of their own,” Meerse said. “That’s one less thing we have to buy, and that’s fantastic. It makes a huge difference when folks donate supplies.”

Lisa McAlister, executive director of the newly formed Matty’s Heart & Soul, said the animal rescue she worked with last year got adoption applications for almost every puppy and other pet it brought to Service Day.

Her organization, named for her own rescue dog, places rescued cats and dogs with local foster homes before adoption. It’s overseeing around 40 animals now, and McAlister plans to bring as many as she can that are old enough and available to adopt.

“It was a phenomenal, phenomenal day last year,” she said.

A few hundred volunteers, including members of the Harriet Bishop Elementary School Service Club, will keep about 30 activities running, Shrey said. Sponsors such as local grocery stores and service clubs are chipping in about $4,000 in supplies and services to help out, too.

New this year will be a booth to sign up for bone marrow donation screening, Shrey said, along with a joint event with Savage Senior Living and a group called STEM Bunnies. The bunny nonprofit aims to stop the common abandonment of the animals by educating interested families, according to its website.

On top of the work its participants accomplish, Service Day is also simply a positive civic gathering, several participants said.

“People feel good about coming together and doing something productive together, and it’s fun,” said Savage spokeswoman Emily Gunderson. “I mean, the (city) campus is hopping that whole time.”

Savage Senior Living is participating for its fourth year by hosting the activity station for the Meals on Wheels lunch bags, Linda Ulrich, the facility’s sales and outreach director, said in an email.

“We believe our senior friends have a lot to contribute to the city of Savage,” she wrote. “It’s heartwarming to see young and old at a table decorating the bags and then sharing conversations all with the common goal of simply making the world a better place.”