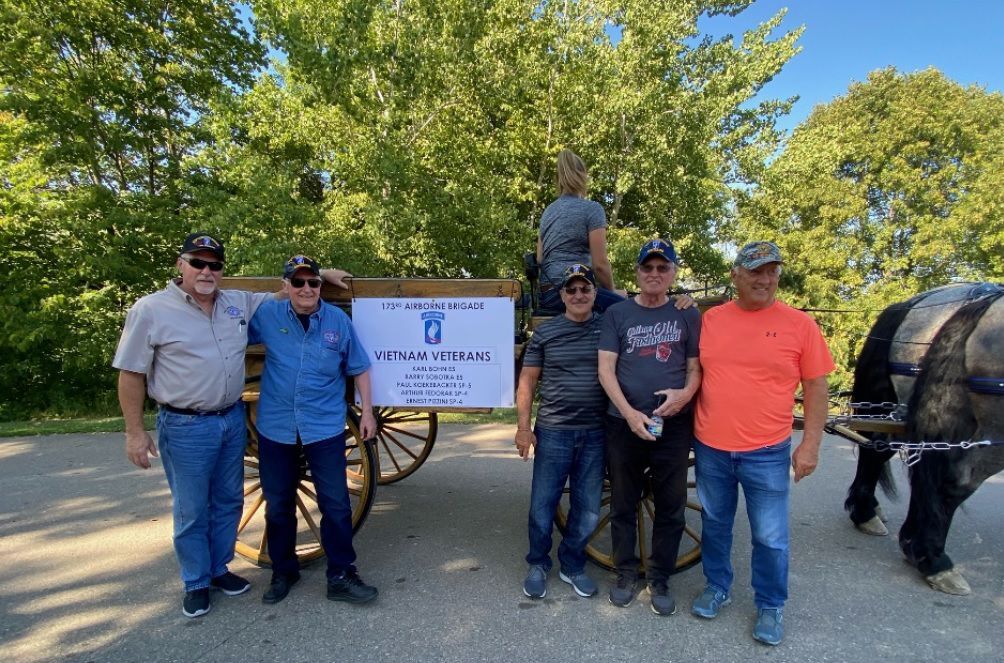 Veterans of the 173rd Airborne Brigade reunite for a wagon ride to the Minnesota Horse and Hunt Club in Prior Lake. The vets, from left to right, are Paul Koekebacker, Arthur Fedorak, Ernie Pizzini, Barry Sobotka and Karl Bohn. 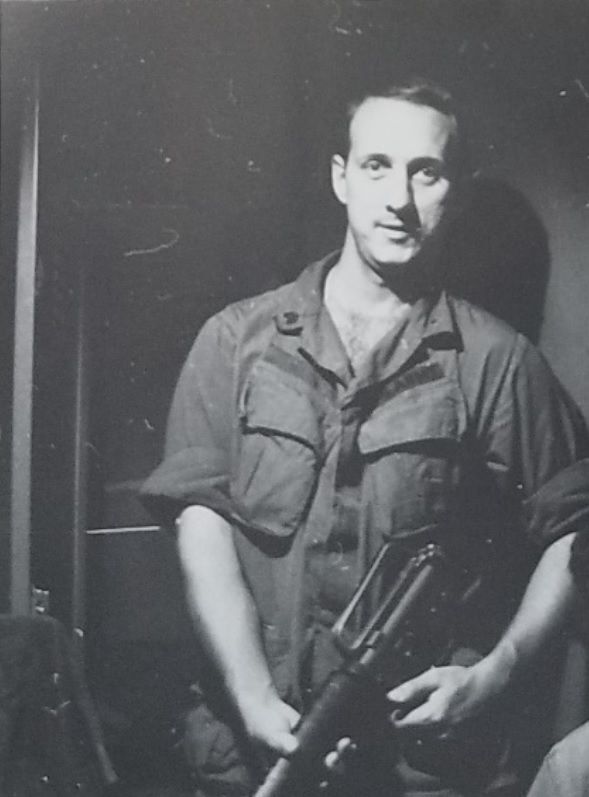 Savage resident Karl Bohn during his Vietnam deployment in 1969.

Veterans of the 173rd Airborne Brigade reunite for a wagon ride to the Minnesota Horse and Hunt Club in Prior Lake. The vets, from left to right, are Paul Koekebacker, Arthur Fedorak, Ernie Pizzini, Barry Sobotka and Karl Bohn.

Savage resident Karl Bohn during his Vietnam deployment in 1969.

It was 53 years ago that five young men just out of high school and college were sent to fight a war in Vietnam. On Aug. 16, five of them reunited at Karl Bohn’s home in Savage to share memories, stories and to catch up on their lives since serving together so many years ago.

Karl was drafted in 1968. He was 23 years old. He was first sent to basic training at Fort Polk, Louisiana. Then he went to advanced infantry training at Fort Campbell, Kentucky. Then on to Fort Benning, Georgia to jump school to learn how to parachute out of planes and helicopters.

Karl was then ordered to go to Vietnam. He was part of the 173rd Airborne. When he arrived, he was assigned to be the sergeant over a group of young men.

The other four who served together with Karl — and came to visit last month — are Barry Sobotka (nicknamed Penguin), from Chicago; Paul Koekebacker (Kooky), from Upper New York; Art Fedoruk (Turtle), from Phoenix; and Ernie Pizzini from Detroit.

During their visit, they enjoyed a horse wagon ride to the Minnesota Horse and Hunt Club in Prior Lake. They also visited Savage Mayor Janet Williams' home for coffee and dessert (Janet is Karl’s sister). They made a stop at the old McColl Farm in Savage — home of the largest Burr Oak Tree in Scott County.

The 173rd Airborne was one of the first army combat units deployed to Vietnam. They arrived “in-country,” as they called it, at the Vietnam Bien Hoa Airbase separately, but within months of each other. They were assigned to E Company, 4th Battalion of the 173rd Airborne Brigade. This assignment was based on their Military Occupation Specialty Code.

E Company consisted of a recon platoon, a four-deuce mortar platoon, and an 81 mortar platoon. They were assigned to either the Fire Direction Center or gun crew. They spent a majority of their time in the central highlands of the Binh Dinh Provence. The coastal lowlands between the mountains provided some of the richest agricultural area in Vietnam, and the coastal waters provided a large fish market. The North Vietnamese Army and Viet Cong relied on these resources for resupply as they traveled on the Ho Chi Minh Trail. The location was within the Binh Dinh Provence in the An Do Valley, a heavily-fortified Viet Cong area.

According to Art, “Our primary mission was to support the units trying to intercept the Viet Cong from infiltrating into our area of operations, to keep them from their supplies and to prevent them from accessing Highway 1 and the railroad line which ran south to north along the coast.”

“A secondary mission was that of supporting the Tam Quan District Pacification effort,” he added.

The Pacification Program was an attempt to provide a sense of security for the hamlets and the villages of Tam Quan and Bong Son. While these men were together they recounted many memories such as when they were in the mountains above the Qui Nhon Port protecting the oil depot, a typhoon hit them.

“It almost knocked us off the mountain,” Ernie said.

Art told about one of the heaviest monsoons encountered while they were out there — it was pitch black and they endured torrential rains. A nighthawk (hunter-killer) team was trying to get to their command post but was unable to determine which way to go. They called in a fire mission to provide them direction.

All of these Vietnam vets were exposed to Agent Orange. They said that Agent Orange was used to defoliate everything at the base camp at LZ English and LZ North. They would spray Agent Orange to get rid of all the foliage. The only water they had to drink was from natural rivers and shallow wells. They dropped iodine tablets in the water to make it tolerable to drink. This exposure has plagued these veterans for many years.

"The worst was coming home and going through the airport. People would insult us verbally," Barry said.

“When we were on the plane to come home, people would literally get up and move away from us because we were in uniform,” Ernie added.

They all unanimously said, “We didn’t ask to go there, we were drafted.”

One thing that each of them talked about is that they formed a lasting bond of friendship. They all said it is a bond that developed 53 years ago in Vietnam and it’s just as strong today.

“We met the best guys in the world when we were over in Vietnam,” they said in agreement. “We were a band of brothers.”