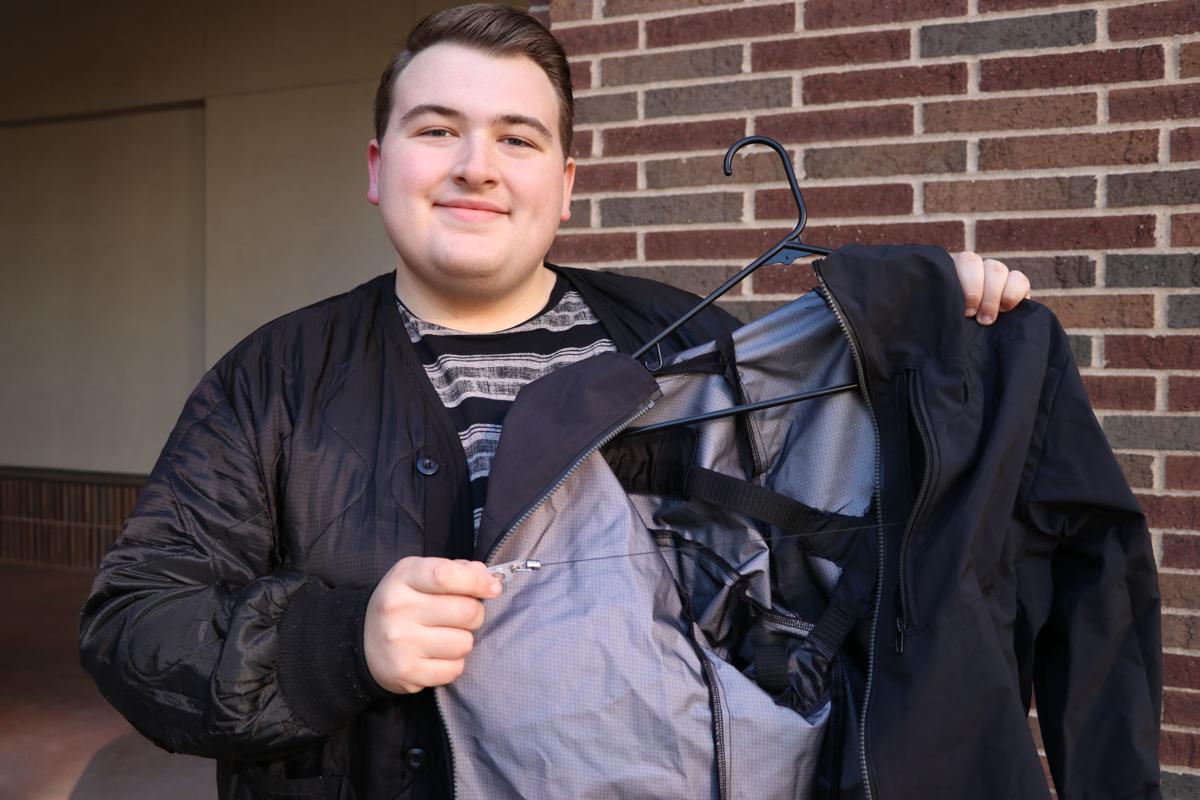 Ian Harris, 21, of Savage shows off the harness system inside a jacket that was designed with the idea it could save avalanche victims. Harris and his teammates took first place in a recent design contest.

Design images show a prototype of a beacon that could be used to save lives in case of an avalanche. The design was crafted by University of Minnesota students in a contest sponsored by Patagonia.

Ian Harris, 21, of Savage shows off the harness system inside a jacket that was designed with the idea it could save avalanche victims. Harris and his teammates took first place in a recent design contest.

Design images show a prototype of a beacon that could be used to save lives in case of an avalanche. The design was crafted by University of Minnesota students in a contest sponsored by Patagonia.

Ian Harris of Savage designs clothes, but his recent creation likely won’t show up on the fashion runways of Paris. It could instead save the lives of avalanche victims.

Harris shared a first place industry prize this year with Warda Moosa and Mary Xiong for their development of a jacket and harness for skiers and snowboarders to wear in the backcountry. Their special design secures a beacon in a pocket and reduces interference with the beacon’s signal, making it possible to locate someone in an avalanche when time is critical.

“We were pretty shocked and proud of our work,” said Harris, 21, a senior in the University of Minnesota College of Design. “I’m still kind of like, wow, I’ve never won a design competition before.”

The trio won first place in the 2019 Advanced Textiles Student Design Competition, which is awarded by the Advanced Textile Products and Narrow Fabrics Institute, a division of the Industrial Fabrics Association International. Their achievement earned a $6,000 prize package and a trip in October to the IFAI 2019 Expo in Orlando.

Harris, a 2016 graduate of Burnsville High School, credits the school’s theater department with giving him a foundation for his design work. He learned to sew while working on costumes and continues to use those skills.

The jacket — officially called an emergency avalanche transceiver garment — is a departure from Harris’s usual clothing design style, which he calls “bright and fun.” But the project is a necessary part of his education at the College of Design.

He has studied color theory, development of textiles and pattern-making skills and submitted a dress inspired by the mod style of the 1960s for the college’s annual fashion show.

Course work became practical his junior year, when Harris worked on a team that made garments for a charity in Uganda. “We made 48 dresses in five different sizes for girls 8 to 18,” Harris said.

The program was also technical. For example, students in the Human Dimensioning Laboratory might find themselves scanning hands to design better gloves for women firefighters. A second lab, the Wearable Technology Lab, has been involved in designing space suits.

As part of the emphasis on wearable technology, students are given a technological problem to solve by such organizations as NASA.

Lucy Dunne, program director for the apparel design program, formed the teams and assigned the projects. Harris, Moosa, and Xiong were tasked with solving a problem posed by Patagonia.

“On the market, there is no garment designed with an avalanche beacon in mind,” Harris said.

Here is how beacons work: A group of skiers or snowboarders carry them and set the devices to “send.” If an avalanche occurred, someone who escaped the disaster would set the beacon to “search” to locate the victims. The beacon, Harris said, works “kind of like a metal detector.”

Xiong tackled the question of whether the beacon would be located near the chest or in the pants. Harris said they decided to place the beacon near the chest to keep it warmer with heat from the body’s core and make it easier to reach.

A harness built into the inside of the jacket secures the garment to the body. Wearability and user mobility was tested on volunteers who performed jumping jacks and arm movements while wearing the jacket.

A second question they addressed was whether to boost the beacon’s signal or to reduce interference from cell phones. Boosting the signal would be “more of an electronic, engineering issue,” Harris said, so they decided on the latter.

Part of the solution was to construct a pocket near the chest for the beacon and reserve a lower pocket on the other side for a cell phone. The other part was to identify a material for the cell phone pocket that would block the signal.

To choose a material, Harris set up an experiment in which he wrapped walkie-talkies in different fabrics and used a spectrum analyzer to measure their signal. Moosa made the special pocket for the cell phone, while Harris sewed the rest of the jacket.

Harris said the team almost didn’t enter the contest because they were unsure whether the project fit, but they figured it couldn’t hurt.

Harris said he doesn’t know if Patagonia will produce and sell the jacket in stores.

“I would love if they would implement this technology we came up with,” he said. “It would be cool.”

In the meantime, Harris is working on his line of clothes for the senior show in February, which will be strictly plus-sized.

“I know people who just need a winter coat” but can’t find it in their sizes, Harris said. “I want to make people smile with my pieces.”