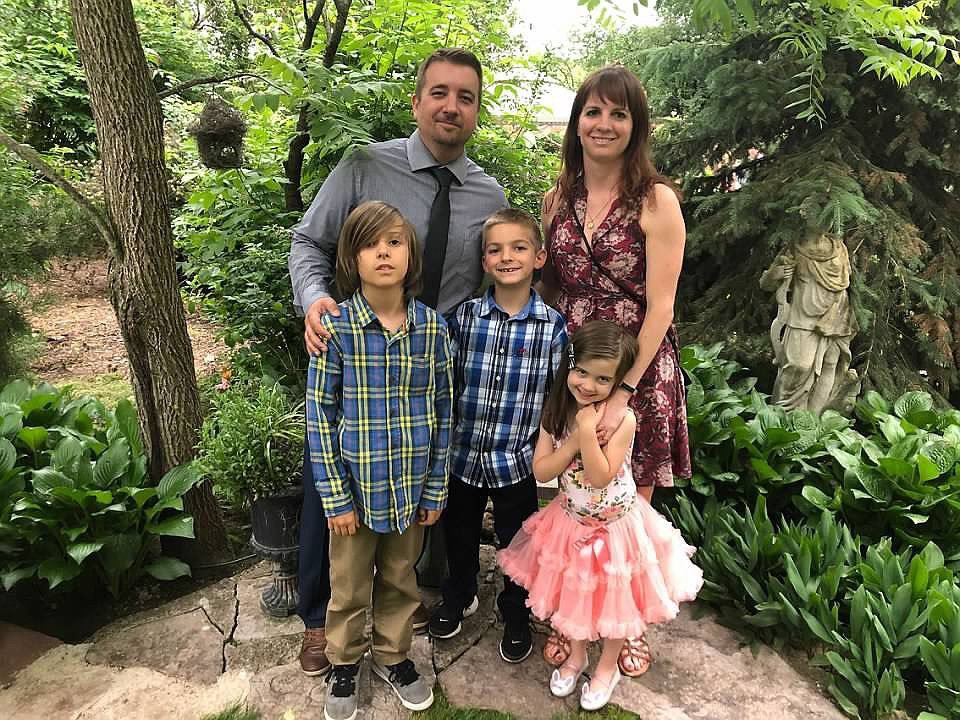 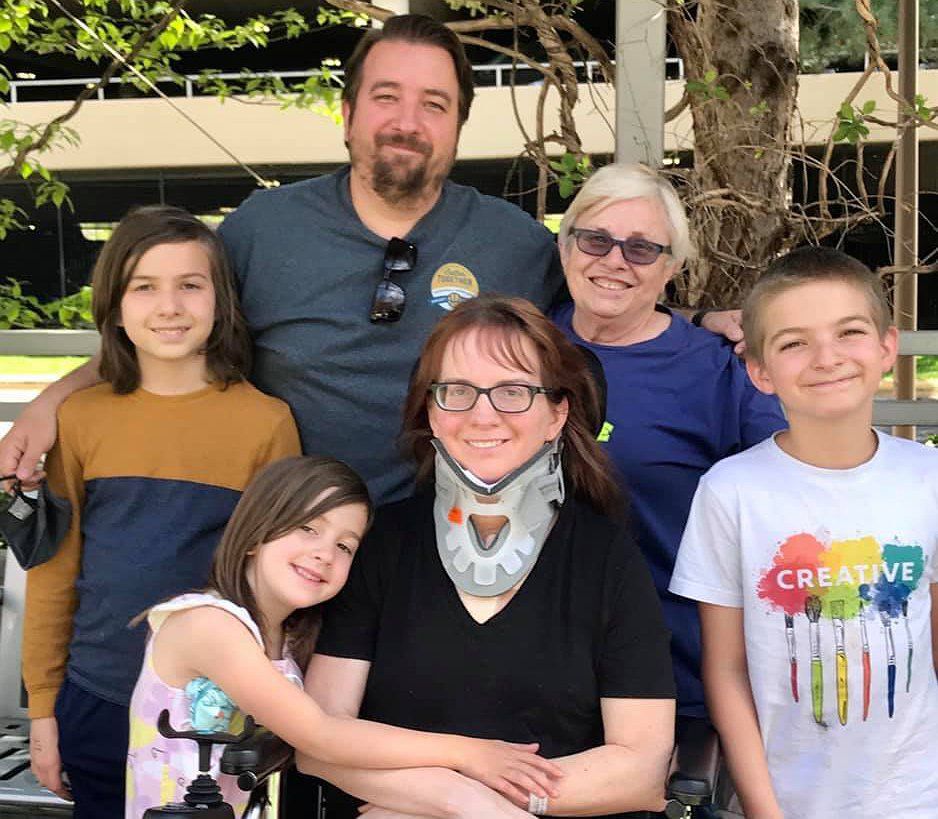 Sarah Gerrish sits with her family outside of Courage Kenny Rehabilitation Institute on May 1, 2021. 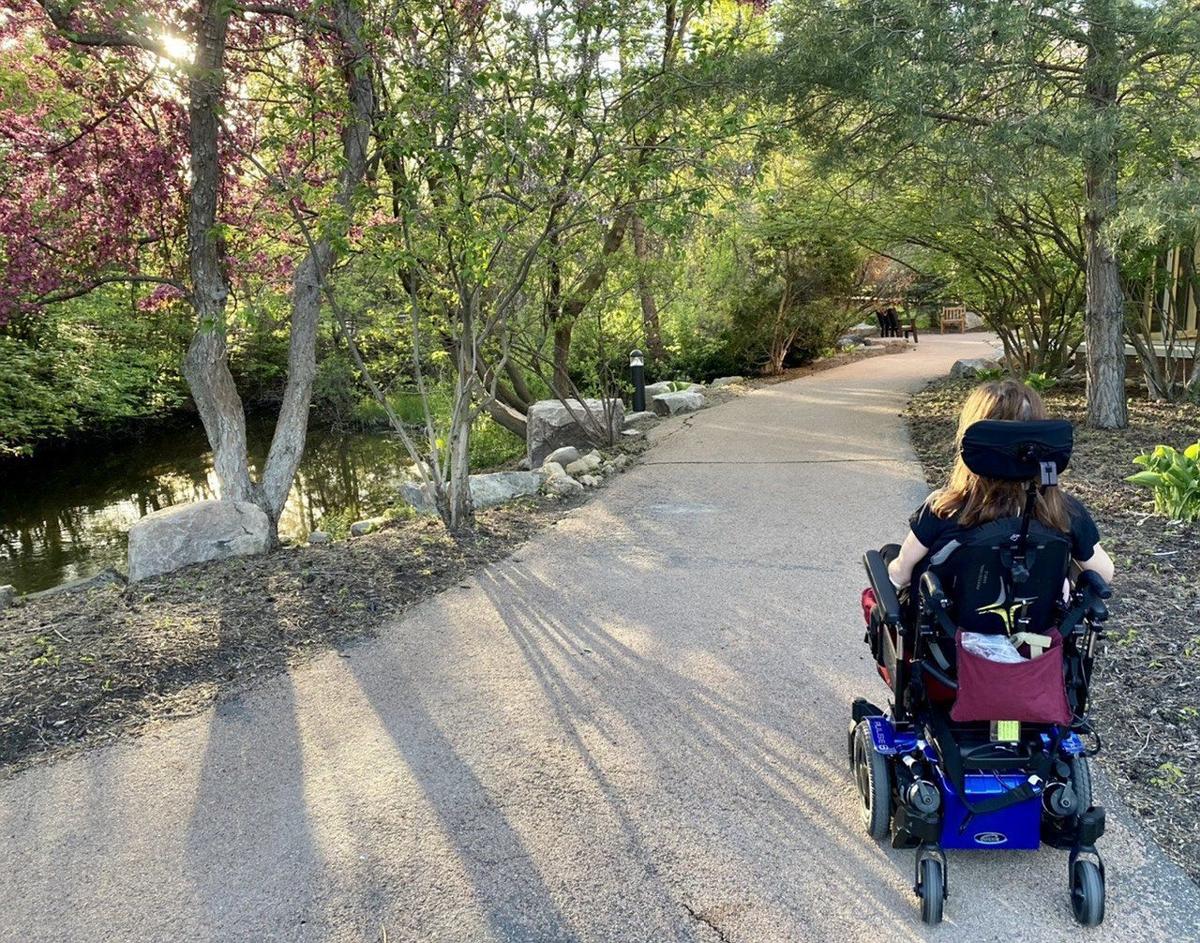 Sarah Gerrish strolls through a park on her power wheelchair. 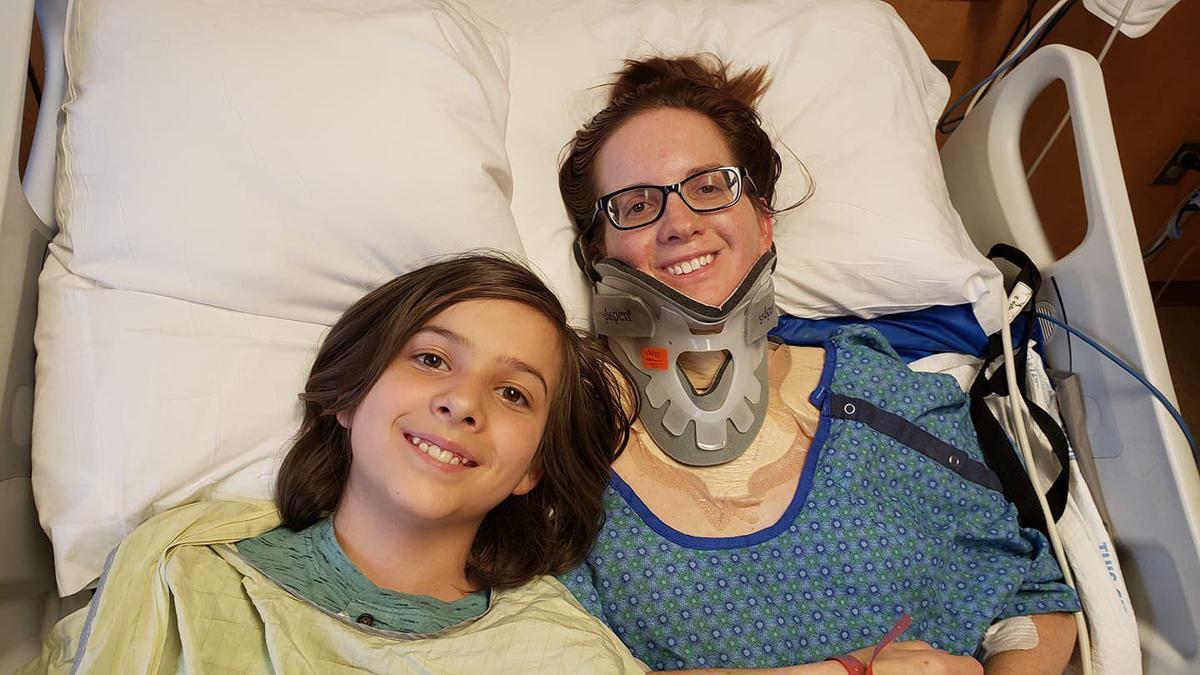 Sarah Gerrish and her oldest son Bennett, 12, during a hospital visit at Hennepin County Medical Center in Minneapolis on April 9, 2021. 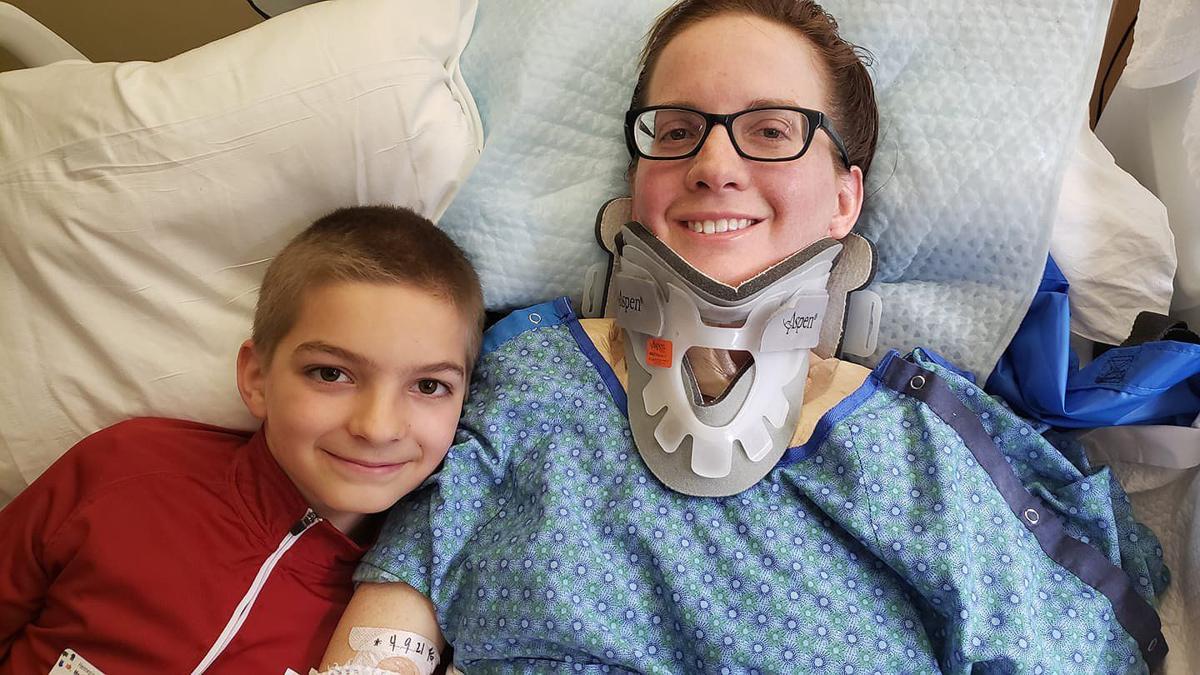 Sarah Gerrish and her second oldest son Colton, 10, during a hospital visit at Hennepin County Medical Center in Minneapolis on April 10, 2021. 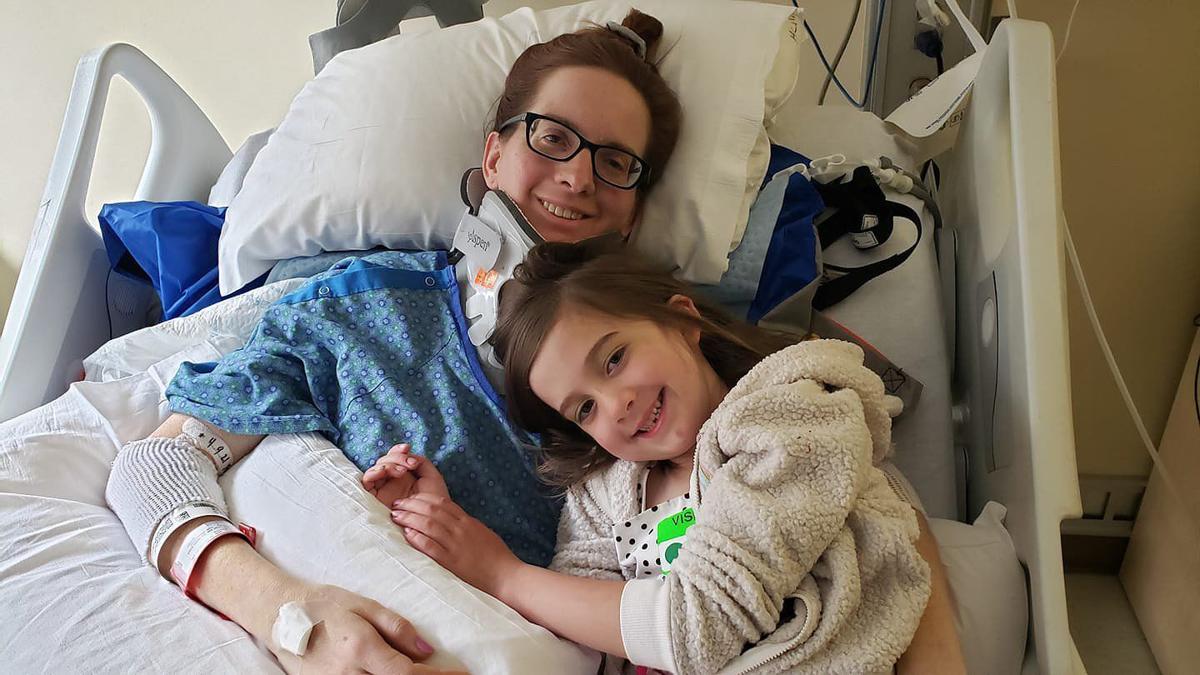 Sarah Gerrish and her daughter Nora, 6, during a hospital visit at Hennepin County Medical Center on April 11, 2021.

Sarah Gerrish and her twin sister Andrea Elstro during a hospital visit at Hennepin County Medical Center in Minneapolis on April 28, 2021. 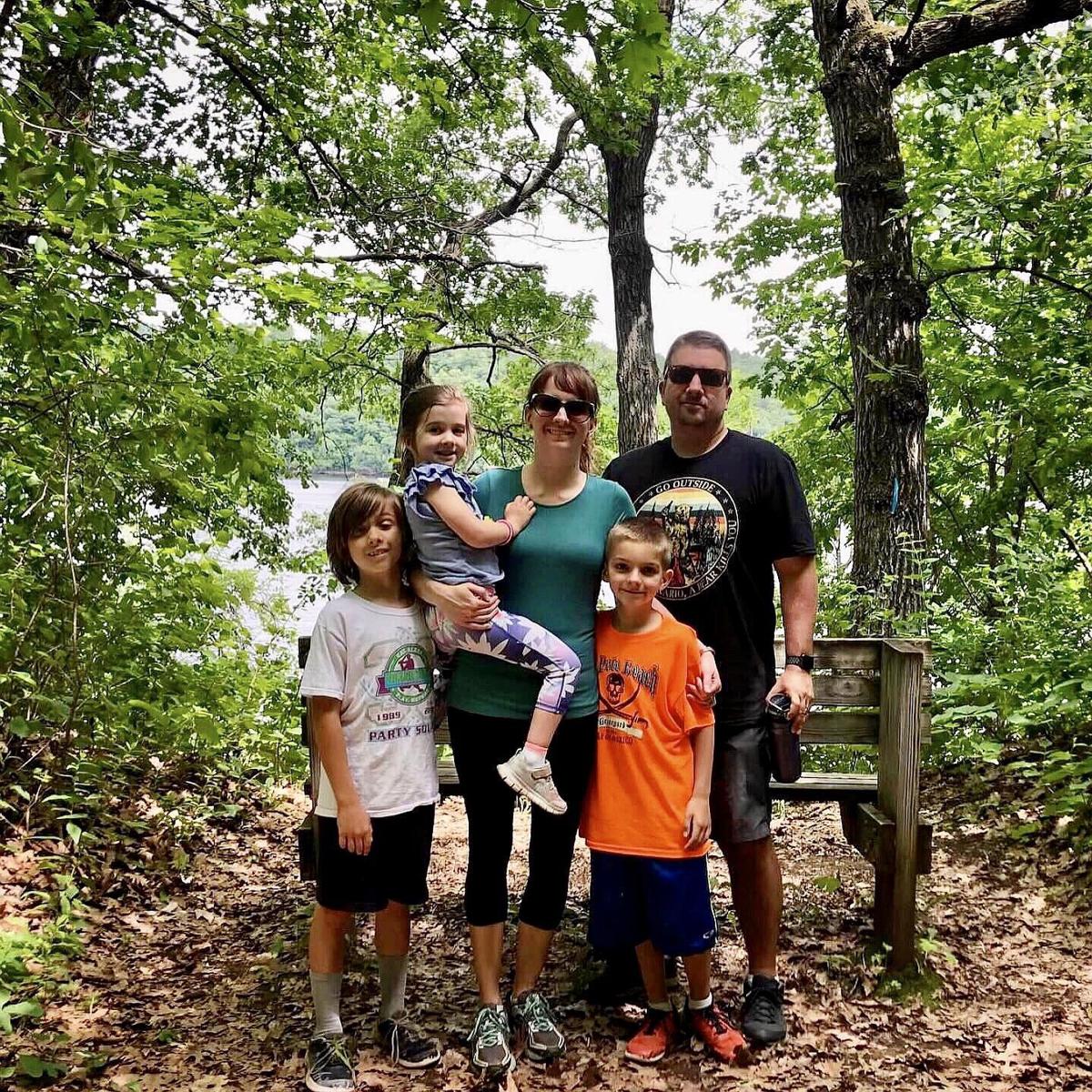 Sarah Gerrish holds her daughter Norah, 6, as she stands for a photo with her husband Paul and two sons Bennett (L), 12 and Colton (R), 10. 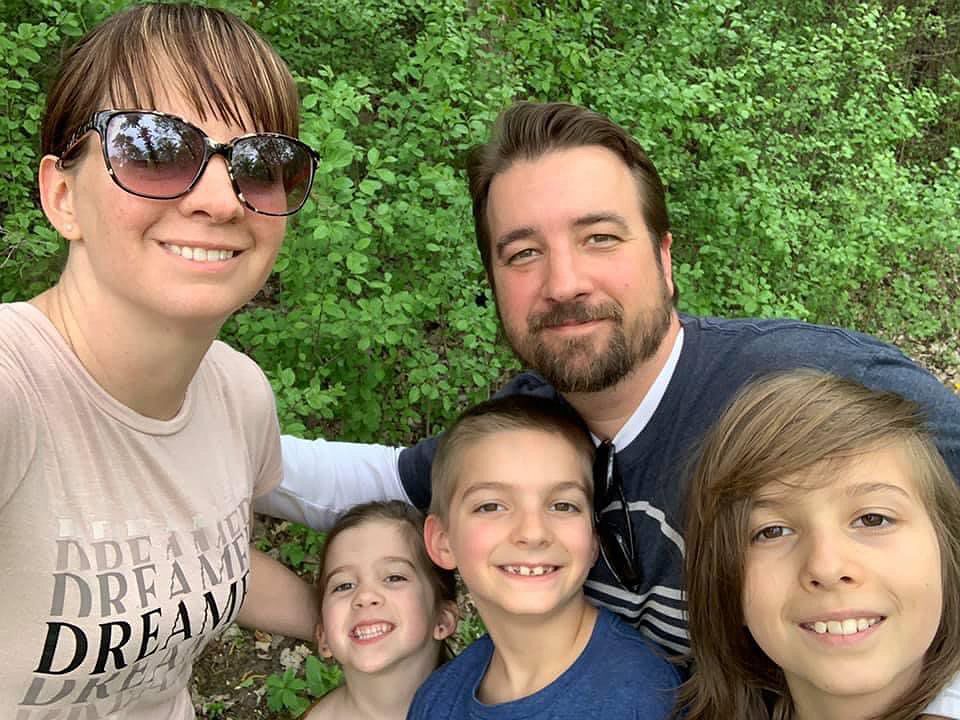 Sarah Gerrish stands for a photo with her husband Paul and three children from left to right: Norah, 6, Colton, 10 and Bennett 12. 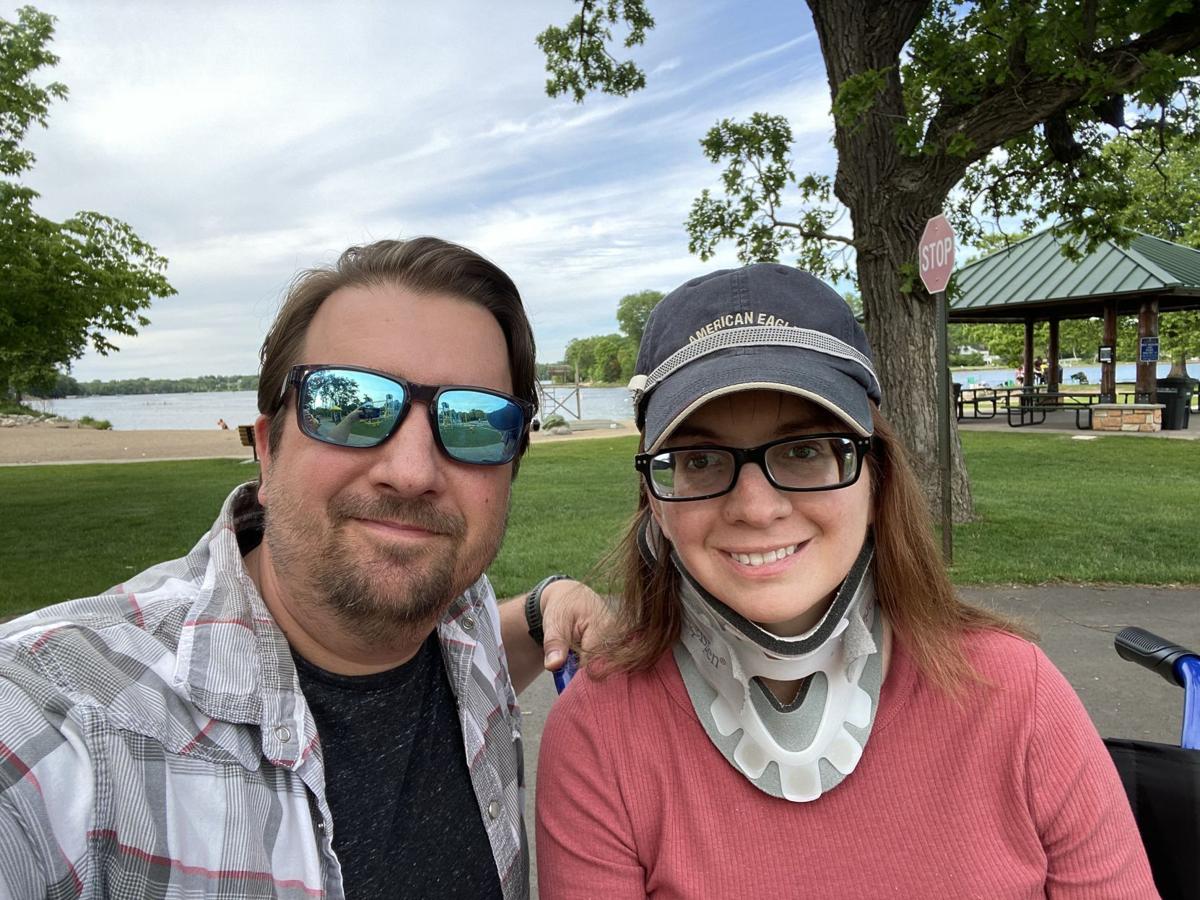 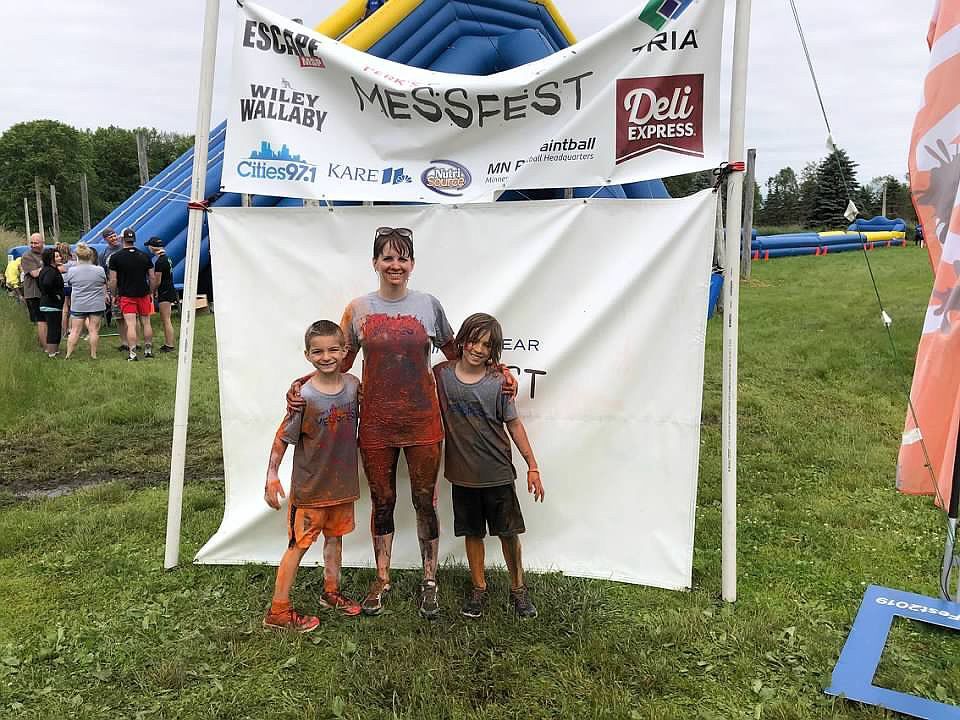 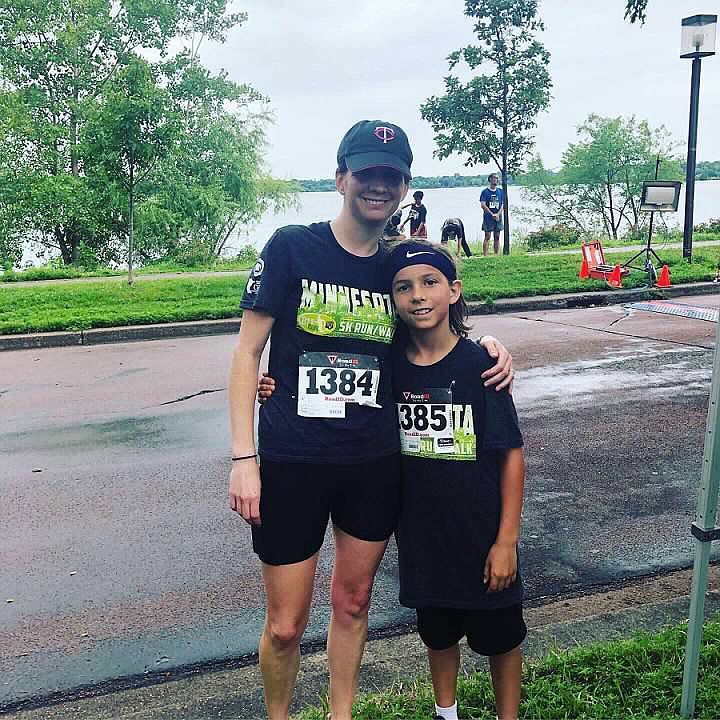 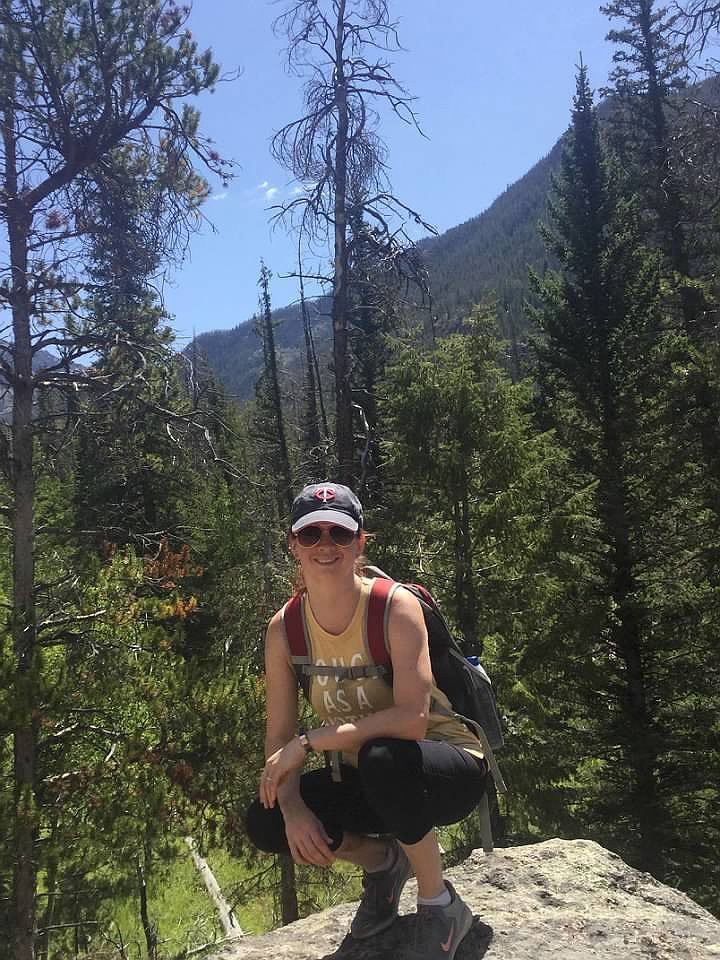 Sarah Gerrish out on a hike. Before her injury, Gerrish enjoyed running and being in the outdoors with her family. 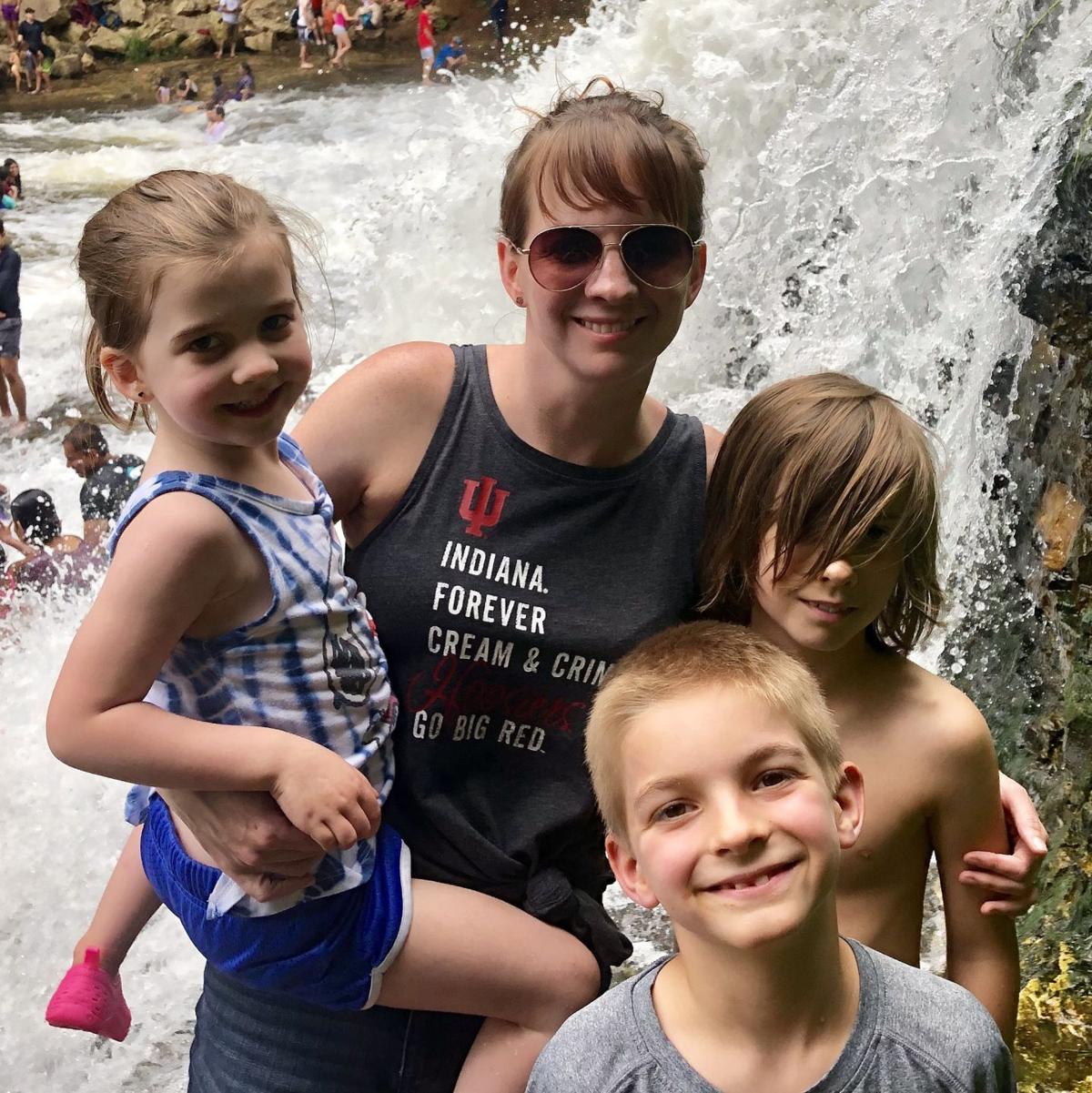 Sarah Gerrish and her three children Norah, 6, Colton, 10 and Bennett, 12. 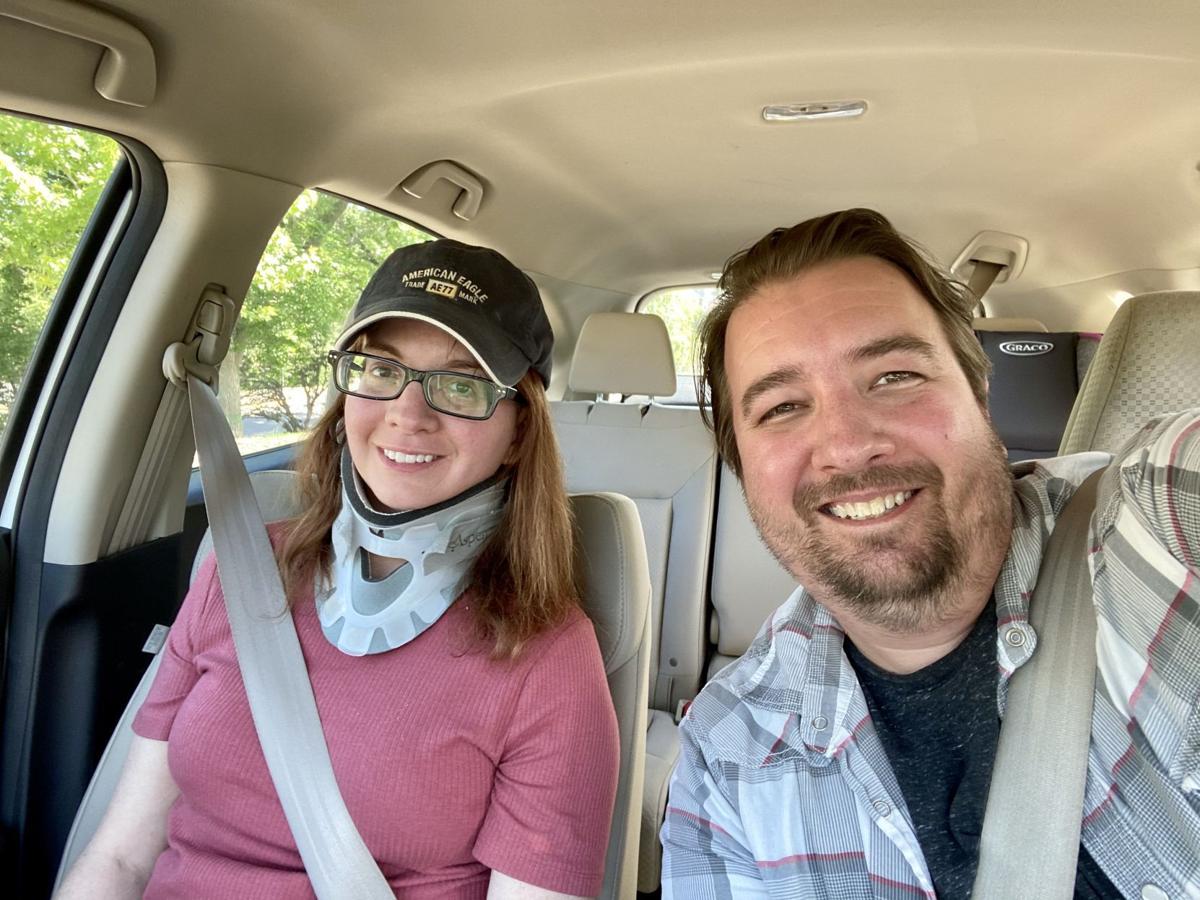 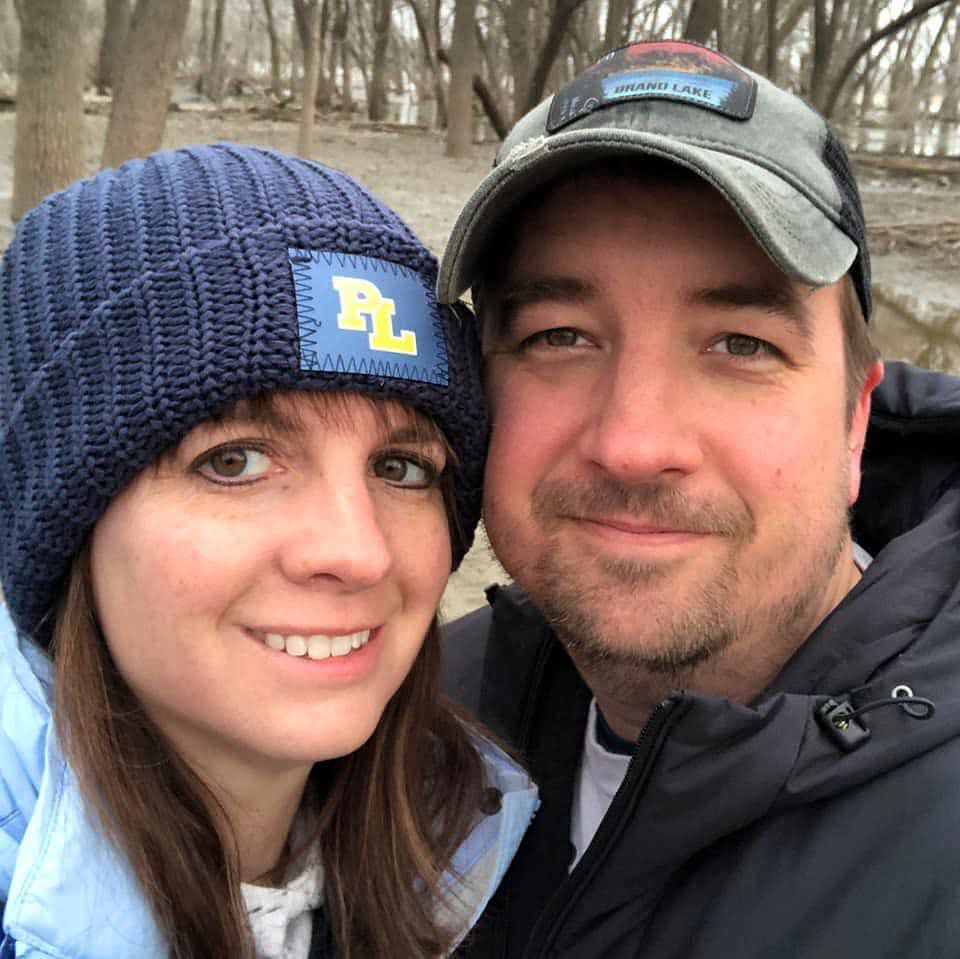 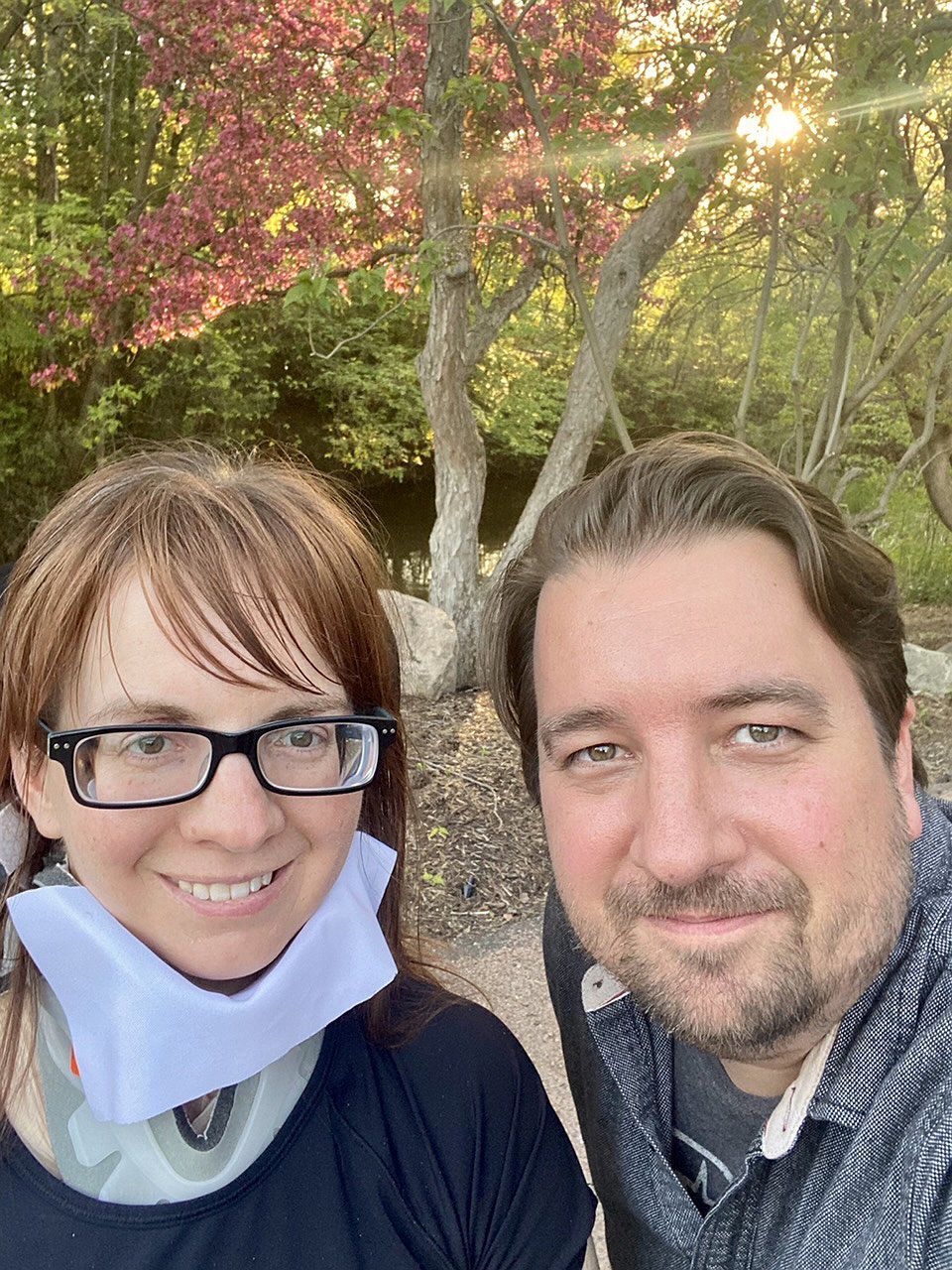 Sarah Gerrish sits with her family outside of Courage Kenny Rehabilitation Institute on May 1, 2021.

Sarah Gerrish strolls through a park on her power wheelchair.

Sarah Gerrish and her oldest son Bennett, 12, during a hospital visit at Hennepin County Medical Center in Minneapolis on April 9, 2021.

Sarah Gerrish and her second oldest son Colton, 10, during a hospital visit at Hennepin County Medical Center in Minneapolis on April 10, 2021.

Sarah Gerrish and her twin sister Andrea Elstro during a hospital visit at Hennepin County Medical Center in Minneapolis on April 28, 2021.

Sarah Gerrish holds her daughter Norah, 6, as she stands for a photo with her husband Paul and two sons Bennett (L), 12 and Colton (R), 10.

Sarah Gerrish stands for a photo with her husband Paul and three children from left to right: Norah, 6, Colton, 10 and Bennett 12.

Sarah Gerrish out on a hike. Before her injury, Gerrish enjoyed running and being in the outdoors with her family.

Sarah Gerrish and her three children Norah, 6, Colton, 10 and Bennett, 12.

Sarah Gerrish was living her normal life as a devoted wife, full-time working mom to three young children, a runner and someone who enjoyed giving back to her community — until her life changed in the blink of an eye on March 28.

Gerrish was paralyzed from the shoulders down following a freak accident in her home in Savage after she stumbled down some stairs in her garage trying to retrieve something from her van.

Before her accident, like most people in 2021, the Gerrish family was looking forward to travel and meeting with friends and family again after a year and a half of not seeing anyone due to the pandemic. Things were looking bright. Sarah and her husband, Paul, were able to get vaccinated before her injury and Sarah was also in the final stages of an interview for a new job that would allow her to work from home.

On the day of Sarah’s fall, the Gerrish family had guests over for the first time in more than a year for a home-cooked meal and to catch up like old times — then things took a drastic turn.

“We had our pastor and his wife over for dinner and I was running out to the garage to grab something,” recalled Sarah. “I was about halfway down the garage stairs and my slippers started coming off. I reached back to grab one and knocked myself off balance and my head hit the concrete floor. From that point on I really couldn’t feel my body.”

“Everybody that was there was really good and helped us both keep calm until the ambulance got there,” said Sarah. “Luckily, our pastor and his wife were there because our pastor drove Paul to the hospital. Paul wasn’t really in the condition to drive and our pastor’s wife stayed with our kids.”

Successful surgerySarah was rushed to Hennepin County Medical Center and suffered a laceration to her head and broke her C5 vertebrae in her neck causing her to be paralyzed from the shoulders down. She had emergency surgery on her neck the following day and was admitted in the Intensive Care Unit for the next three weeks.

Paul said when she broke her C5 vertebrae, it hit her spinal column causing it to swell and dissected an artery.

“They did a whole graft to remove that C5 vertebrae and they did a spinal fusion. They also put a graft in between her C4 and C6 vertebrae and she was in surgery for about four hours,” said Paul.

Paul said following the successful surgery, Sarah regained sensation throughout her body, but had very little movement. Even though Sarah’s spine was stabilized, doctors were clear that she had a very long, difficult and uncertain recovery ahead. They advised them to measure recovery in months, not days, and to celebrate the small wins along the way.

“Even just six weeks ago when I was talking to the doctors, we were talking about hopes and dreams and what kind of recovery outcomes would be amazing, including walking and having Sarah come into the house and give our kids a hug,” said Paul. “Doctors actually told us not to expect it but to continue to be optimistic and push for it.”

Sarah was eventually transferred to Courage Kenny’s inpatient acute spinal rehab program at Abbott Northwestern Hospital in Minneapolis. While there, Sarah was able to see her three young children — Bennett, 12; Colton, 10 and Norah, 6 — for the first time after the accident.

“The first time they got to see mom in person, she was in a power wheelchair. She was able to move her left arm just enough to give them a little bit of a hug,” said Paul. “I think that put their minds at ease and we talk pretty constantly about not knowing what things are going to look like. We’re still the same family and we can do a lot of the same things, it just might look a little bit different. We just have to adjust to make mom comfortable when she comes back to us.”

After a month, Sarah was moved to the transitional rehab program at Courage Kenny in Golden Valley where she’s been making great progress and receiving less medical treatment and focusing on getting her ready to move home.

‘I want to run again’In the last three weeks Sarah has been able to stand and walk using just a traditional walker. She is now also brushing her own teeth, feeding herself, working on brushing her hair and she’s transferring in and out of bed without a lift. Sarah said her goal is to be able to run again.

Sarah and Paul’s oldest son, Bennett, would run with her on the weekends before the injury. He joined the track team as a sixth-grader and runs as a tribute to her. Bennett has set personal records each week in distance events and eagerly shares his progress with his mother after practice each day while she recovers.

“At the end of all this, I want to run again. I’m a runner, and that’s something I really enjoy doing,” said Sarah. “If I can’t do that, then I definitely want to see myself walking again and I think that’s something that I can do. It’s just a matter of how long it takes to get there.”

Prior to the pandemic, Sarah was also a full-time employee and volunteer. She was the treasurer at their church up until her injury and has also tutored adults pursuing their GED in Minneapolis. Aside from tutoring, Sarah volunteers with her children at Feed My Starving Children and helps fundraise for Gillette Children’s Specialty Healthcare in St. Paul.

Paul said life has been challenging since Sarah lost her corporate job due to the pandemic and has been away in physical therapy, but they are thankful for the support from their family, friends and community.

“With family so far away (in Indiana) and Sarah in the hospital for months with very limited visitation, we’ve relied heavily on our community to keep things afloat,” Paul said.

“Help Hope Live is unique in that all donations are managed by the non-profit and can only be spent on approved medical, care, transportation and home modification expenses for patients recovering from catastrophic injury or critical illness,” said Paul.

Paul said he is thankful for the progress Sarah has made and thanks everyone involved in her recovery.

“She’s blown us all away with her resilience and grit and even her care team has been astonished by the progress she’s made so far. She’s fighting for every inch her body will give her and the staff at Courage Kenny has been amazing,” said Paul. “Sarah is certainly the heartbeat of our family. After seeing her paralyzed, confined to a bed and unable to hold my hand, it has been a blessing to see her stand up, take her first steps and not look back. We pray that one day she’ll be running and working again, but we remain thankful for every little victory along the way. We wouldn’t be where we are without the love and support of our friends and community.”

Those interested in mailing a check to help pay for the Gerrish family's medical bills can make checks payable to Help Hope Live.

In honor of Sarah Michelle Gerrish