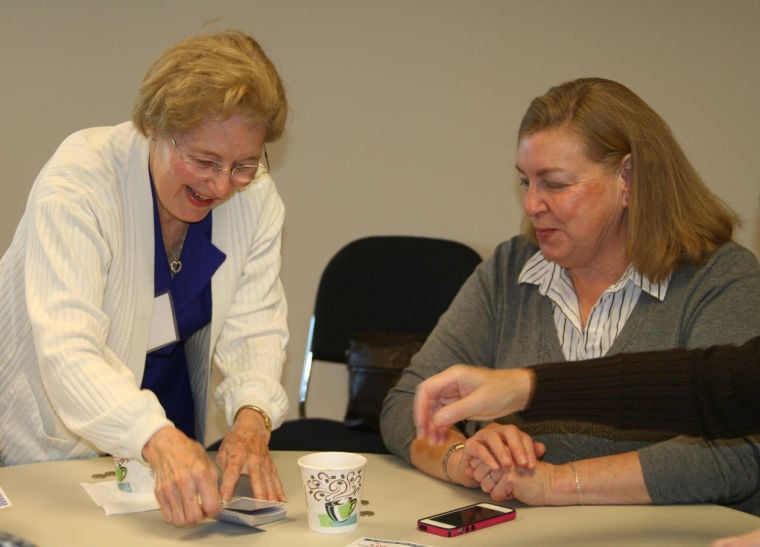 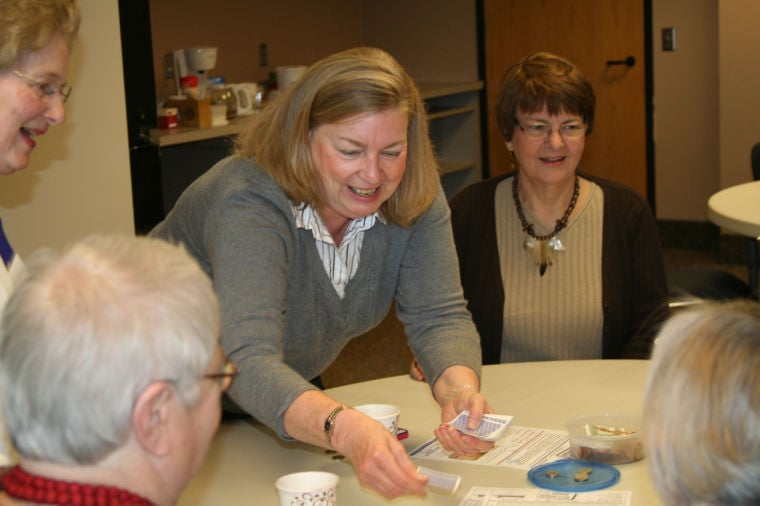 The Savage Senior Club and the Savage Arts Council have both recently moved into their new spaces at the Savage Library, and both organizations are more than satisfied with their new homes.

“We love the new space,” said Ann Klein, a Savage Senior Club member who helps organize events for the group. “I think if you talk to anybody here, they’ll tell you how much they like it.”

“It’s very comfortable in here,” added club member Del Lind. “People seem to enjoy it. I think it has something to do with the fact that it’s our space, a place of our own.”

The Savage Senior Club started in the summer of 2011, and since then members had been meeting every Tuesday morning at the McColl Pond Environmental Learning Center. Because that facility is often leased out for special events, the group was required to put out tables and chairs before each weekly event, then put everything away again. Club members have shared the responsibility of opening up the McColl Pond ELC for weekly meetings, and for set-up and clean-up duties. They’ve also received assistance from the city parks department staff.

Now, they have tables and chairs set up permanently in their new space, and they also have room to store equipment.

Members of the Savage Arts Council are equally excited about the approximately 2,000-square-foot space they share with the Savage Senior Club.

“We are just in the process of moving in, but we are very excited about it,” said Denise Baerg, chair of the Savage Arts Council. “We are thrilled to be able to have a place to call home for the very first time.”

“Ever since Savage Art Studios left in 2012, there’s been a missing link for artistic and cultural things to do in this city,” Baerg said, adding that the new space will allow the Arts Council to start hosting a wide variety of classes. “We have had a very positive response from the community about having classes. There’s been a lot of interest about that.”

The two nonprofit entities are sharing the library space, which includes two offices, a small meeting room and a large meeting room.

While the space is inside the Savage Library’s building, Baerg wants to make it clear that it is separate from the library and has its own door around the wall to the right of the library’s main entrance. “We were thinking about calling it ‘The Annex’ or something,” said Baerg.

While that’s what they’ll tell people to explain that they’re not actually part of the library, their new space does have an official name: The Savage Arts and Cultural Center.

The Savage Senior Club recently underwent a name change, too. Until recently, it was known as the Savage Social Club.

“It was for identification purposes,” Lind said. “When people see the word ‘senior,’ they know it’s for people over the age of 50.”

The club has been a place for seniors to expand their social circle, play games and learn about issues that affect their peer group. The group often has some sort of presentation from a speaker or organization, like talks about senior health care, end-of-life planning or the history of Savage.

“We’ve had some really interesting speakers,” Lind said, “and learning to know Savage has really been helpful.”

Some of the upcoming presentations include seminars about sarcoma cancers, Gettysburg and nature preservation. The group will hold its Savage Seniors Holiday Festival on Tuesday, Dec. 17 during which attendees are encouraged to bring a half dozen treats and share their favorite holiday memories.

While the group has been meeting every Tuesday from 10 a.m. to 1 p.m., some members have taken it upon themselves to start meeting on Thursdays from 1 to 4 p.m. It started as a way to get people together for card games such as cribbage or 500, but other activities are welcome such as knitting.

While the group doesn’t receive funding from the city, it does receive the space, and Lind said he is appreciative of city leaders for keeping the interests of its senior citizens in mind.

“The leadership in the city, they do things for young people like ballparks and things for families like Music in the Park,” Lind said, “but they didn’t forget seniors. They’ve been very encouraging and have provided for us and helped us.”

Club members say they go to Savage Senior Club meetings for good company, good conversations and fun, and for Dean Osterman and Diane Helgeson, it’s been a way for them to meet new people.

“We’ve been here [in Savage] for a year and a half and our neighbors haven’t been that responsive,” said Osterman, “but since we started coming here, we’ve met some nice people and have actually gotten together with them [outside of the group].”

Savage Arts Council members are especially excited about the new space because it will allow them to do things they never had the opportunity to do before.

“What makes us excited about this is that we’re going to be able to do several different things [in this space],” Baerg said. “We could even do fun things like improv classes. We actually have far more ideas than we have time at this point.”

Baerg said that when they first started the Arts Council, which puts on events like the Scott County Art Crawl and the Minnesota River Arts Fair, they put the “S” on “Art” for a reason.

“When the organization was formed, we wanted to be clear that [we were supporting] multiple forms of art,” Baerg said. “We were first focused mostly on visual art, because you have to start somewhere… but now we’ve been able to grow it beyond that. We’ve kind of taken that first step toward supporting multiple forms of art, and this is just going to solidify that, especially now that we have a home.”

Baerg said the organization plans on holding classes for visual arts, writing and more. The classes could begin in February, and once they’ve been decided upon, participants can register for them by visiting www.savageartscouncil.org.

The Arts Council is also going to be able to use their new home as a gallery and exhibit space for work created by local artists, Arts Council members and people taking classes through the Arts Council.

They’re also excited because they’ll now have the opportunity to offer some small venue cultural events. For instance, the Arts Council is in talks with a woman who performs music using instruments from around the world, and they hope to have her perform in their new space sometime next year.

Most importantly, Baerg said the Arts Council wants to make the programming affordable and accessible for people of all ages and skill levels.

“We’re trying to make this something that appeals to a wide variety of people,” Baerg said. “We’re kind of joking, but we keep saying that we want to make this for people age 8 to 108.”

Volunteer for the Savage Arts Council

With events like the Scott County Art Crawl and the Minnesota River Art Fair, the Savage Arts Council is always in need of volunteers. But now that they are opening their new home, the Savage Arts and Cultural Center, they need volunteers more than ever. To find out how you can help, visit http://www.savageartscouncil.org/join-the-fun/volunteer