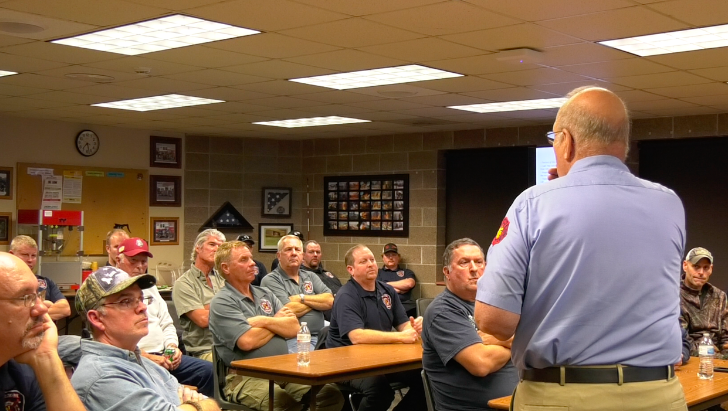 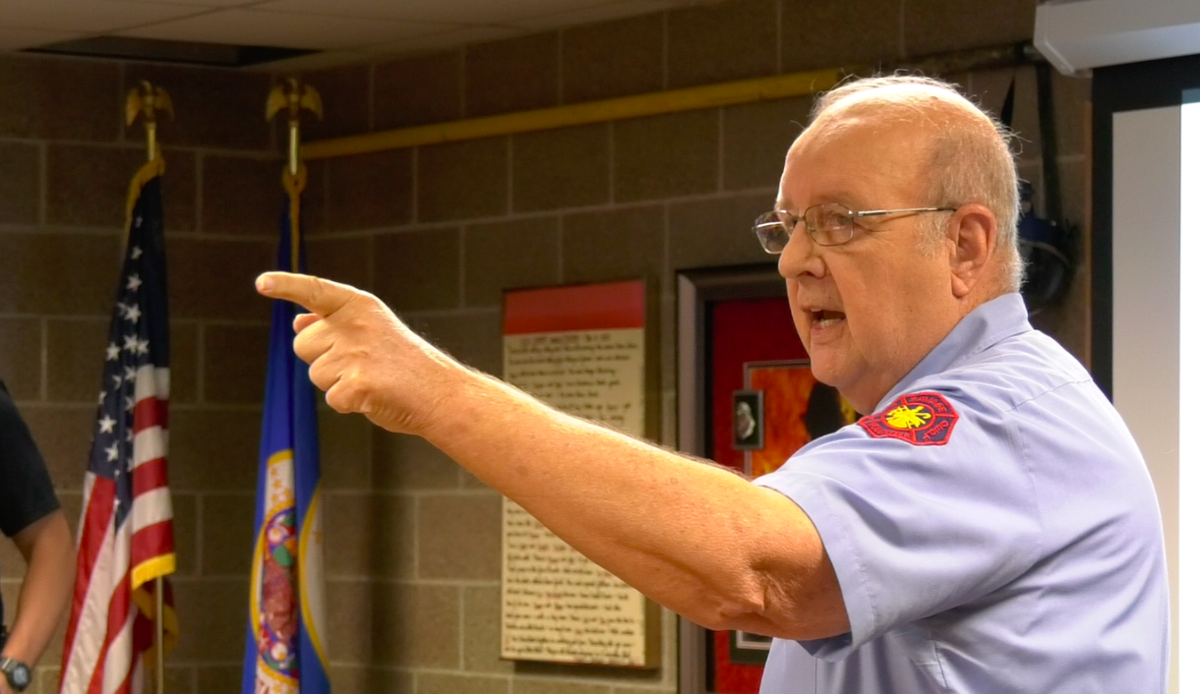 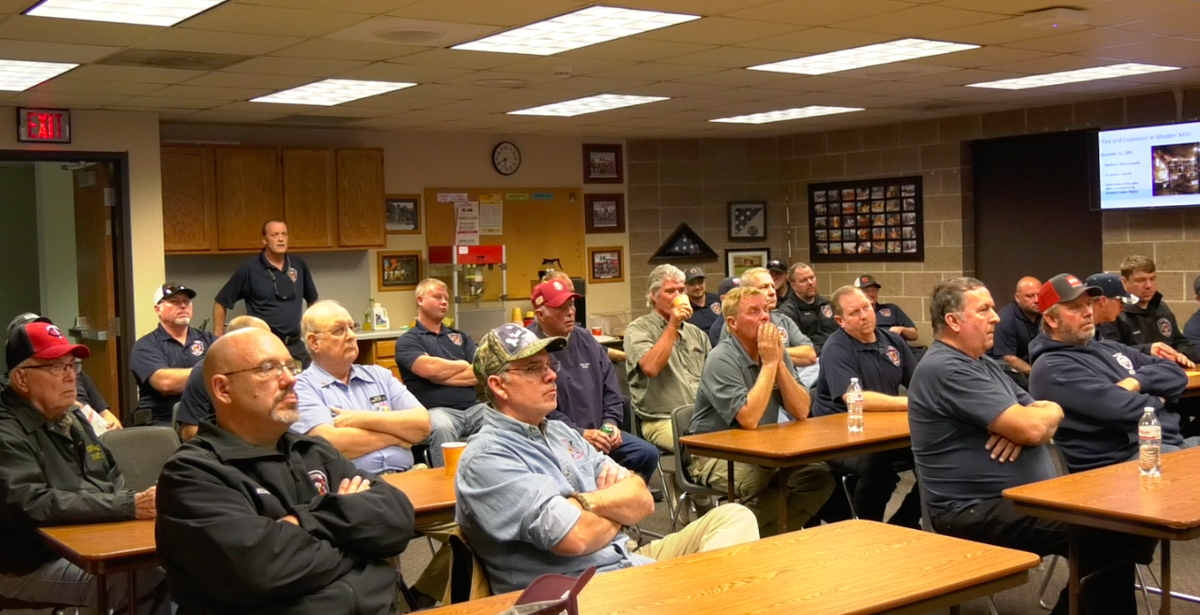 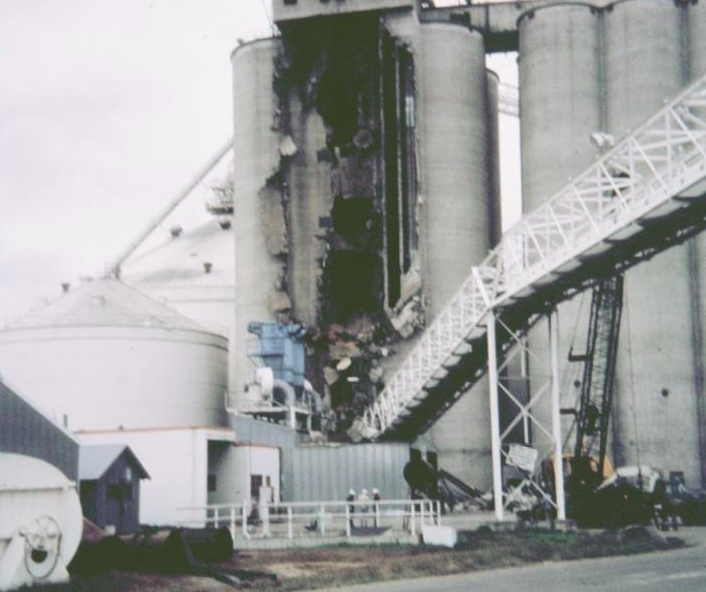 Left - This image of the blast area ran in the Oct. 4, 1978 edition of the Daily Globe in Ironwood, Michigan. 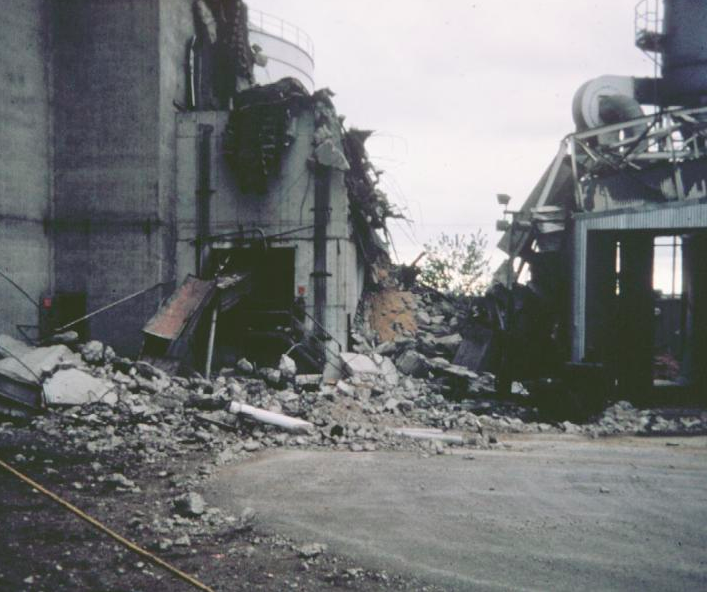 Photo by AP from the Oct. 4, 1978 edition of the Daily Globe Ironwood, Michigan.

Left - This image of the blast area ran in the Oct. 4, 1978 edition of the Daily Globe in Ironwood, Michigan.

Photo by AP from the Oct. 4, 1978 edition of the Daily Globe Ironwood, Michigan.

Forty years ago this month, three men were killed when an explosion ripped apart a grain elevator in Savage. According to grain and fire experts, tighter industry regulations haven’t eliminated the risk of explosions.

On Oct. 23, retired firefighters — and a Port Bunge employee who survived the explosion — shared memories from the devastating day in hopes of better preparing responders for large scale explosions and fires.

“We want to take all this information and learn from it so when — not if — this happens, when it happens, we are better prepared for it,” Savage Deputy Fire Chief Andrew Slama said. “I don’t think we are ever going to be completely prepared.”

The ports along the Minnesota River in Savage are an economic engine for the country’s grain industry. Grain elevators located at the six ports in Savage include those operated by multi-billion dollar companies such as CHS and Cargill. Back in the 1970s, Savage’s Port Bunge unloaded soy and corn grain from around 500 trucks per day. Today, the Port Bunge grain elevator — renamed Savage River Port LLC — is owned by Ceres Global Ag Corp.

“I just saw a big fireball,” he said.

Koch leapt into the next room of the office he was working in, took cover and waited.

“Suddenly it just became really quiet,” he said. Eventually, Koch and other employees walked outside to see that the structure below the elevator’s headhouse had been blown wide open.

“We kind of stood there, we were all in shock, not knowing what to do or where to go,” he said.

Another coworker emerged with his clothes on fire. Eventually, they began to run north towards the Minnesota River as responders began arriving.

In recent years, the fire department began formally debriefing after fires. The firefighters and chiefs reconstruct details of the incident to examine the circumstances leading up the fire, the initial actions taken, what went well and what could’ve gone better.

On Oct. 23, the Port Bunge explosion debriefing finally took place. The generational divide between the retired firefighters and current firefighters became apparent during the debriefing, as retirees recalled unsafe practices such as holding each other by the ankles while someone pulled a firehose on top of the building. The uniforms back then consisted of a rubber raincoat, rubber boots and a plastic helmet — one retiree remarked they were waterproofed but not fireproofed. Today’s commonplace equipment, such as air tanks and masks, weren’t in the picture.

Although the times have changed, retired fire chief Marc Bohn said the mission is the same — save lives.

Bohn — the fire chief at the time — worked nearby at American Cast Iron on the day of the explosion. One of the yardmen came into his office to alert him of the blast. Bohn had just become the first in Scott County to use his personal vehicle as a chief’s car. He arrived at the scene before the fire department got the call, he said.

He remembered a man with an ash-blackened face crawling out of a corn pile. Immediately, Bohn began calling Shakopee and Prior Lake departments for assistance.

There was no fire hydrant nearby, and Bohn directed the Bloomington department to run hose lines across Highway 101 despite the highway patrol’s objections. However, the fire wouldn’t begin until hours after the first explosion.

“If you’re a fireman, you’re looking for fire,” said Tom Johnson, a retired Savage firefighter who arrived in the first engine on the scene. He was 22 years old.

Joe Williams was still in his firefighter training period when the explosion happened. As a trainee, he was not yet permitted to go to a fire call on the truck. The grain elevator explosion was his first call nonetheless.

Al McColl was working as a police officer at the time. He said that the biggest challenge initially was trying to account for everyone. They could see a huge pile or rubble but had no idea how many people were missing.

Retired firefighter Ken Rypka was one of the responders who climbed over 100 feet to get to the highest part of the grain elevator structure, called the headhouse. The headhouse was still standing despite the severe damage to the middle portion of the structure. When they arrived at the top, Rypka said, they could see two badly burned bodies through an opening in the wall.

“They told me I could go in there and get the bodies out if I kept a rope around me,” he remembered.

The floor had been blasted away. Rypka crawled out onto the support beams and handed a body back through the opening. Then he removed the safety rope he was wearing and used it to pull out the second body.

“They were really well burned; you couldn’t recognize them,” he said.

A third body was recovered from a large pile of rubble around 5:00 a.m. the next morning. Others were injured and treated in the hospital for burns.

Those killed were later identified as August Kes, a Savage resident and Minneapolis Grain Exchange weighing supervisor; Joe Franek, a New Prague resident and weigher with the Bunge Corp; and Jim Gault, a St. Paul resident and grain sampler trainee. A few hours after the initial explosion, a fire broke out around 160 feet from the ground when a large conveyor belt lit fire.

Bohn became teary remembering August Kes’ son arriving at the scene and asking about his father. According to an article published that week in the Prior Lake American, Kes left a wife and four children.

“You can pre-plan it, but you never know what it’s going to be like when it actually happens,” Bohn said.

The retirees recalled working at the scene around the clock for nearly a week. The Savage woman’s fire auxiliary worked around the clock, too, making sandwiches and coffee for the firefighters, who ate and rested in shifts. During the deconstruction of the site, a fourth man was killed by a falling beam.

“We’ve had fire fatalities in Savage, but we’ve never had anything of this magnitude,” said Savage Fire Chief Joel McColl.

“You don’t realize what it’s like at a big fire like that ... it’s tough as hell,” Bohn said to the firefighters. “The pressure on the chief — the white hat — you don’t believe it, you can’t feel it until you wear it.”

Slama said grain elevator explosions have been deadly problems throughout the country for a century.

He explained that sugar, flour and many other things create small particles in the air, known as combustible dust, that ignite under certain conditions.

Koch said primary explosions can also shake dust from the structure’s walls and surfaces, creating fuel for a severe, second explosion. Port Bunge’s tidiness likely saved them from one of those.

Grain elevators started to be constructed with non-combustible materials such as concrete and steel, replacing the wooden structures of the past.

Slama said that in the 1970s and 1980s, there was a huge rise in explosion fatalities.

“The wooden elevators in the past had little blast damage because they blew out from everywhere, they didn’t have the stability,” he said.

The federal government became involved in studying grain elevator explosions and found confinement was a key factor in the severity of the explosion. After nearly a decade of studying the explosions, new regulations brought sweeping changes to the industry, Koch said. The design of grain elevators changed to allow more open structures and explosion venting.

Today, Koch has returned to manage the grain elevator in Savage. Despite the major changes that have taken place in the industry in recent decades, he continually reminded firefighters, the risk of an explosion is minimized but not eliminated.