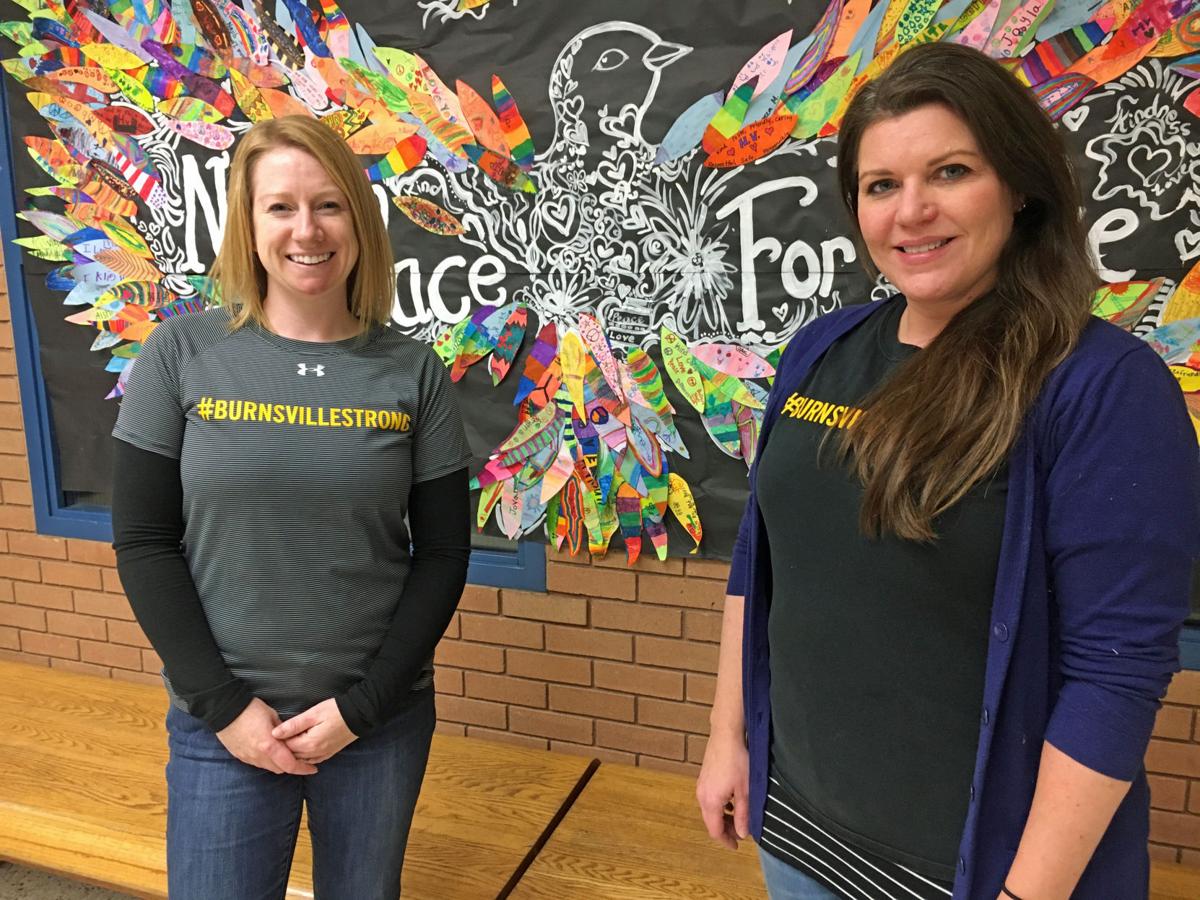 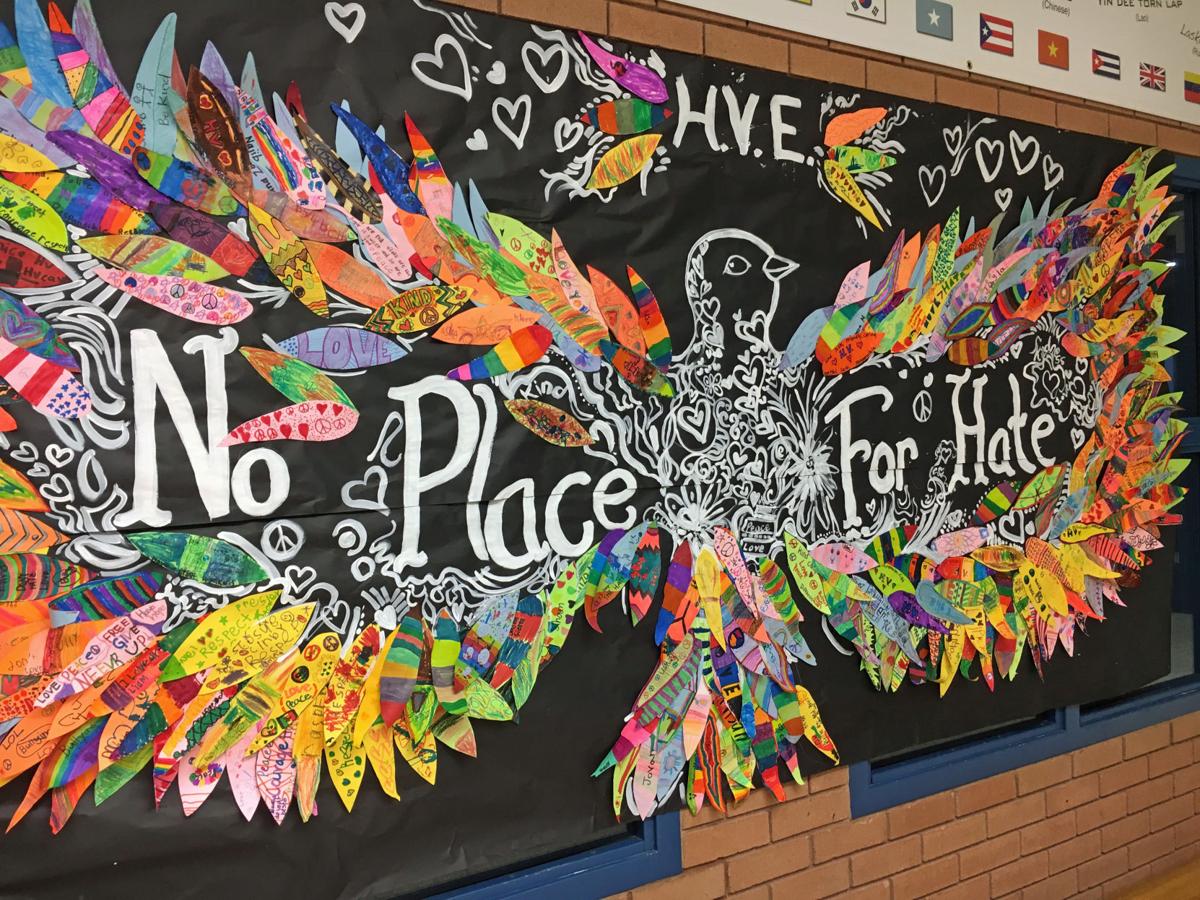 Students cut out and decorated 550 paper feathers to create the peace dove, which can be seen on a wall near the school’s entrance. 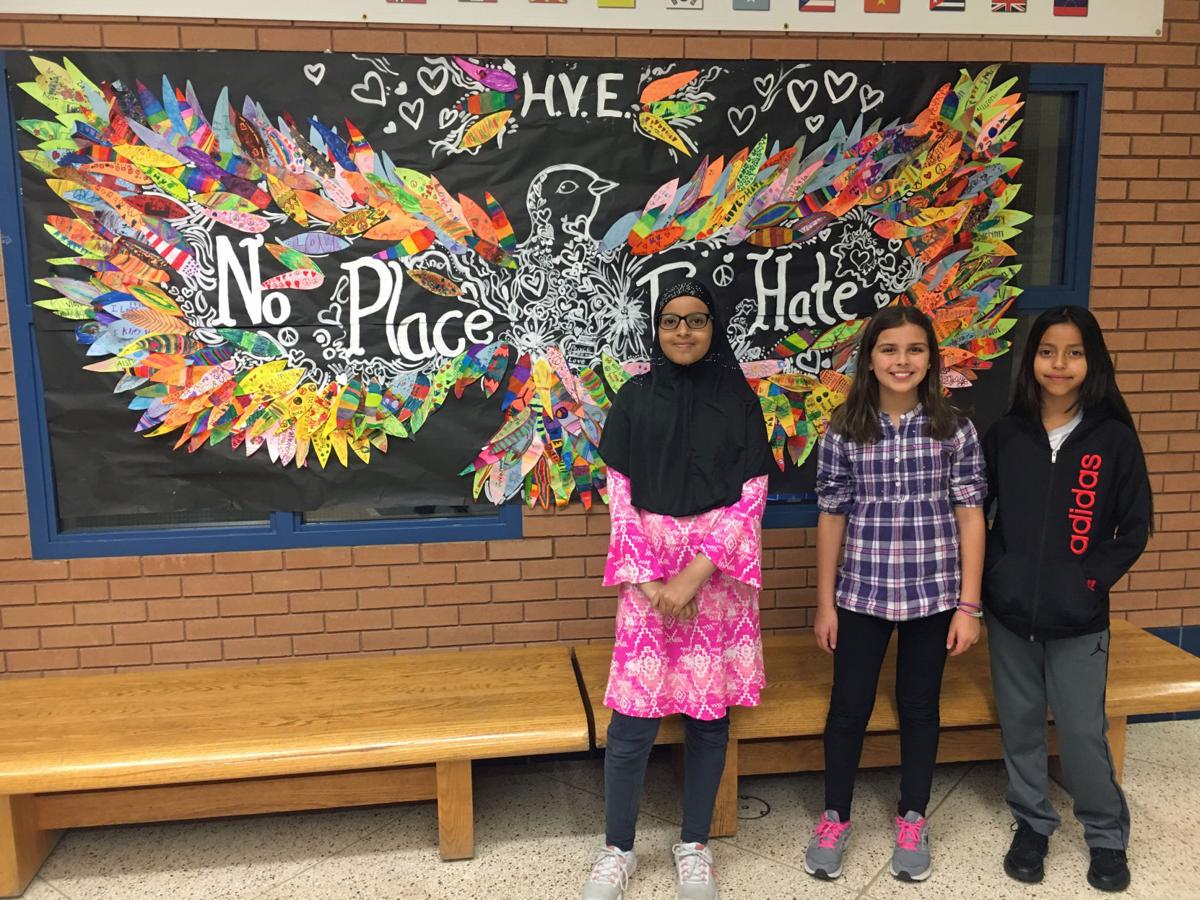 Pictured are Hidden Valley Elementary School fifth-graders, from left, Hanan Dayib, 11, Emma Legorreta, 11, and Esmeralda Loredo, 10. They are three of 20 student leaders who cut out the paper feathers for other students in the school to decorate. The students are pictured on Friday, Nov. 17. 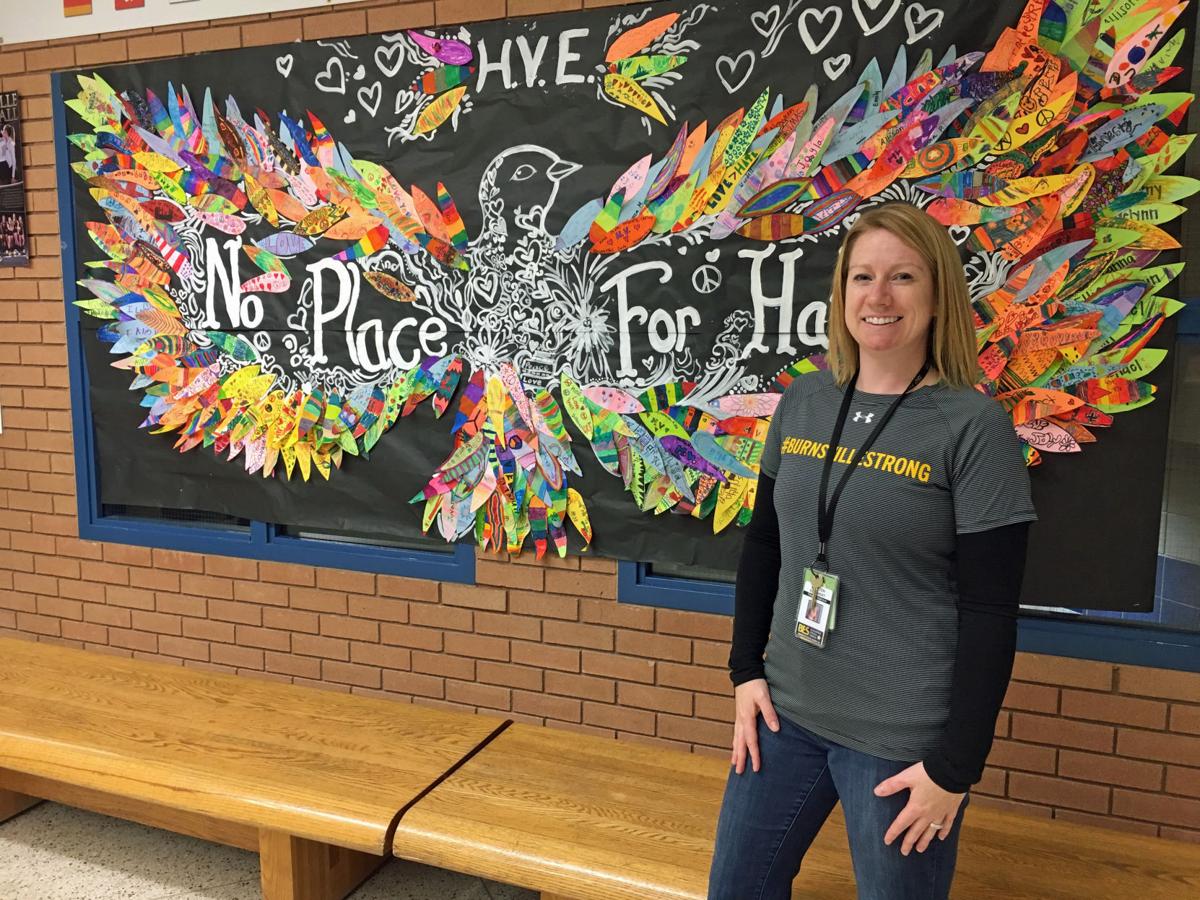 Kristen Reichert, school social worker at Hidden Valley, stands near the No Place For Hate peace dove on Friday, Nov. 17.

Students cut out and decorated 550 paper feathers to create the peace dove, which can be seen on a wall near the school’s entrance.

Pictured are Hidden Valley Elementary School fifth-graders, from left, Hanan Dayib, 11, Emma Legorreta, 11, and Esmeralda Loredo, 10. They are three of 20 student leaders who cut out the paper feathers for other students in the school to decorate. The students are pictured on Friday, Nov. 17.

Kristen Reichert, school social worker at Hidden Valley, stands near the No Place For Hate peace dove on Friday, Nov. 17.

To say Hidden Valley Elementary School is diverse would be an understatement.

The school in Savage has a student population that represents 20 languages, said Kristen Reichert, the school’s social worker. And 55 percent of its students are considered Limited English Proficiency status. That’s more than double the district’s average number of LEP students in its elementary schools. That average stands at 25.5 percent, according to 2017-2018 data presented at a recent Burnsville-Eagan-Savage Area School Board meeting.

As students file in and out of classrooms, a struggle for peace remains. Last year, hate crimes rose across the country. In fact, a Nov. 13 report from the Federal Bureau of Investigation shows hate crimes jumped from 5,850 reported incidents in the U.S. in 2015 to 6,121 in 2016.

“With the national climate and international climate, it’s really important for all kids to know that they’re welcome and safe and wanted here,” Reichert said.

“You can be pretty sure a lot of (what they hear is) negative,” Merkel said.

‘No Place For Hate’

Reichert went into this school year inspired by a conference she attended over the summer. The conference was put on by PACER, a national bullying prevention center and advocacy group for children with disabilities.

Before school started, Reichert and Merkel put their heads together. What kind of anti-bullying project could they do this year? They had done a project four years ago, after the state Legislature and Minnesota Department of Education passed rules strengthening protections against bullying. It was time for a new project.

“I was just looking for something that everyone’s a part of. They’re less likely to commit acts of violence,” Reichert explained.

They thought of a giant, multicolored peace dove accompanying the words, “No Place For Hate.” Other students and staff didn’t necessarily know what it would be but they worked hard on it. Twenty student leaders — called “student ambassadors” — cut out 550 paper feathers. They sorted, bagged and handed the paper feathers to students, who each drew and colored on one.

Then, quietly, one day those 550 feathers became a giant display near the school’s entrance and office. It drew awe and praise from parents, staff and students from across the school, Reichert and Merkel said.

It taught students that “our purpose here is to be kind and helping to our friends,” Reichert said.

Eleven-year-old Hanan Dayib, a fifth-grader at the school, was one of the students who cut out the paper feathers for the project.

“You shouldn’t be a bully,” she said the project taught. “It’s not really a nice thing.”

Helping students feel safe neither starts nor stops with this recent art project.

“With the political climate being what it is, we have a responsibility,” Merkel said.

Across the Burnsville-Eagan-Savage Area School District, among all grades and ages, teachers, staff and leaders have taken training through a program called “Culturally Proficient School Systems.” The outcome of the program, according to the district, aims to make participants become more culturally aware and sensitive to a variety of students’ needs.

“The fact is, most of our staff is white,” Merkel said. “We need to all be in the same place, on the same page.”

Merkel said she’s worked to include a variety of cultures in her classes. For example, recently she included a Somali folk tale called “The Lion’s Share” in her class. The story is about the misuse of power.

“Diversity is really a powerful, amazing thing,” she said.

She said that last school year the district paid for her and her fellow art teachers to go to a workshop at the Minnesota Humanities Center for a workshop that encourages diversity in places such as education, government and community leadership.

The diversity training increased dialogues about important topics. For example, that sometimes it’s awkward to not know or understand something about a culture. But that sometimes you should just ask.

“That awkwardness is OK… it’s good because it means that you’re trying,” Merkel said.

This kind of work makes its way to the classroom, where she says students need to see that teachers are kind, accepting, supportive people.

“It’s not like racism hasn’t been there,” she said. “But since this last election cycle, it’s been a lot more blatant. We need kids to know not all white people feel that way.”