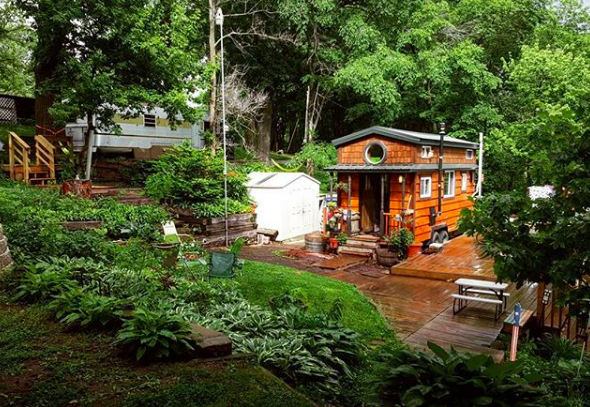 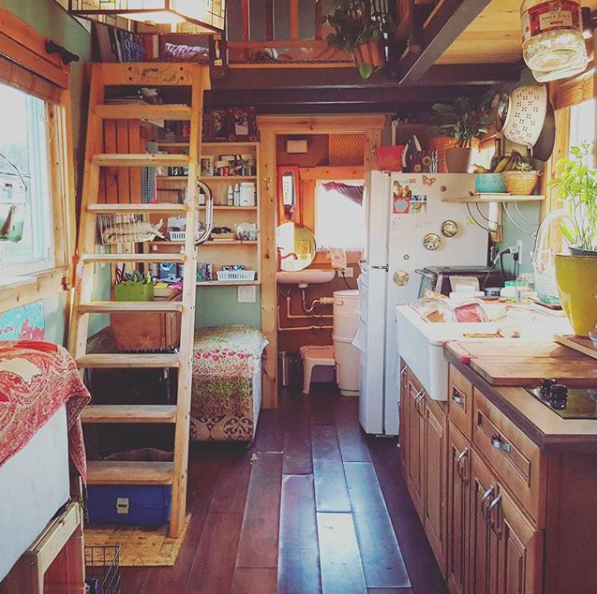 This 267-square-foot tiny house is home to Kim Kasl, her husband, two kids and two dogs.

This 267-square-foot tiny house is home to Kim Kasl, her husband, two kids and two dogs.

A family who sold their Shakopee home for a tiny house about a tenth the size say they are ready to buy a house again but the small-home, minimalist lifestyle has taught them to make do with less.

Kim Kasl and her husband traded their 2,000-square-foot Shakopee home for a 140-square-foot tiny house four years ago, drawing attention around the region and making an appearance on the TV program “Tiny House Nation.” They live in the 140-square-foot abode with two children — Sully, 10, and Story, 8 — and two dogs.

With the kids growing up, Kasl said it’s time to make an adjustment in order to give both kids their own space to express themselves in.

The couple originally planned to remodel a silver streak camper into a master bedroom to add on, so to speak, to their tiny house, but the camper was destroyed in the tornado this fall. They instead decided to begin the home search. This month, the Kasls placed an offer on a 1,500 square foot single family home in Faribault.

Kasl said they aren’t planning on filling their new home with furniture, and her husband might even construct a wooden platform for their bedroom to mimic sleeping in the loft of their tiny house. She joked that they’ve gotten used to sleeping on a wooden floor after ditching their mattress.

In the next chapter, Kasl said they hope the flexibility of the single family home will help them launch a nonprofit for expectant mothers. They’d also like to list their tiny house on Airbnb, and one day the Kasls plan to move back in as empty-nesters.

“I don’t feel like we are leaving what we’ve done behind,” Kim Kasl said.

Tiny homes, though attention-grabbing around the country, have in some ways been swimming against the current.

The National Association of Homebuilders last year said the median new, single-family home’s size reached about 2,500 square feet in 2015, up almost 500 square feet since 2000 to 2015, a trend combined with fewer first-time buyers and high building costs. The median size has fallen slightly since then but is still about 2,400 square feet.

On the other hand, cities around the country have seen more interest in accessory dwelling units, such as cottages or attics near larger homes, for budgetary or environmental reasons. St. Paul’s City Council last year voted to allow more of the structures, for example, according to the Pioneer Press.

Ryan Mitchell, founder of The Tiny Life, a blog about tiny houses, minimalism and homesteading, said tiny houses are often a tool families and individuals use for bridging financial gaps.

“Tiny houses can be a forever home or a stepping stone to a life you want to lead,” Mitchell wrote in an email.

The Kasls were high school sweethearts from Cambridge and rented in Chaska and Belle Plaine before settling into their first home in Shakopee.

Kim Kasl ran a wedding photography business, and her husband had a few years of graduate school left. That’s when Kim said she felt a calling to homeschool their two young children, who were about to reach school age.

“God was opening my heart to that, but it didn’t look possible financially,” she said.

Kim Kasl began looking more closely at their mortgage and the student loan payments that soon surpassed mortgage payments by more than $1,000.

“What can we do with the mortgage?” she recalled thinking. “That’s when God started turning our hearts towards minimalism.”

Kasl began researching ways to scale things down and started learning about tiny-house living, which usually refers to a home that’s smaller than 300 square feet.

The Kasls spent $30,000 to construct their tiny house. Listings on Tumbleweed Tiny House Company’s website show the homes typically cost around $70,000 to $95,000 to buy new.

The Kasls first parked their tiny home on a campground in Savage and later moved around to a few other places before settling on a lakeside property in Faribault.

Kim Kasl said the family spends most of their time outdoors, where they usually have a campfire near their deck overlooking the lake.

Inside, they live without television, and many nooks are lined with books and homeschooling materials.

She said a home isn’t defined by size and the number of the things.

Kasl said that more people, especially millennials, are seeing minimalism as an opportunity.

“It’s so cool to see that change in our culture,” she said.

Kasl said that around 75 percent of the comments she’d read on news articles about her family were negative and often critical of their parenting ability back when they first started tiny house living.

“Now, it has completely flipped,” she said.

Mitchell says he expects to see a tiny house boom during the next recession.

“Living simply is something that’s very attractive to most people in the modern age,” he wrote. “People are wanting different lives and the ideals of tiny houses meet those needs very well.”