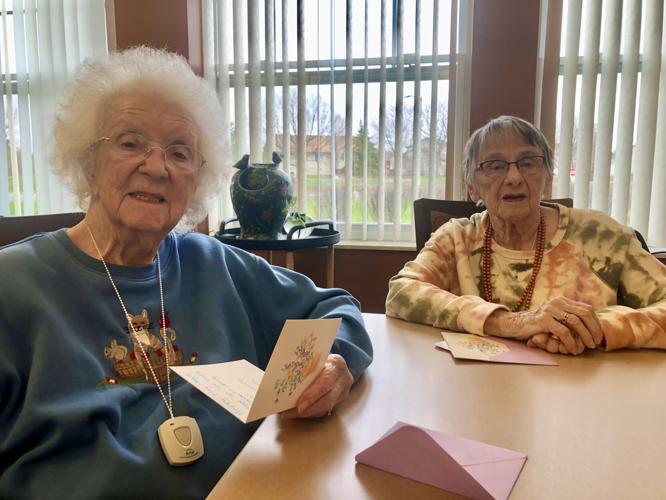 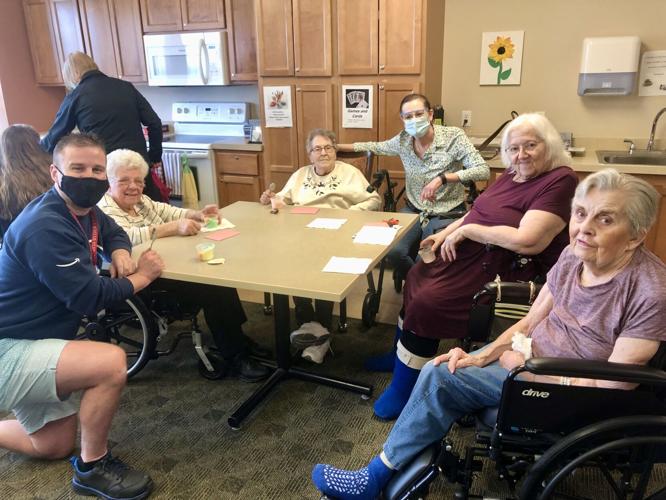 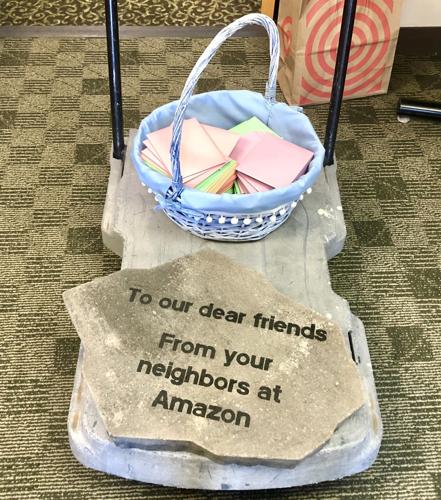 In addition to cards, Amazon provided a dedication stone to the living center. The stone is inscribed with the phrase, “To our dear friends, from your neighbors at Amazon.”

In addition to cards, Amazon provided a dedication stone to the living center. The stone is inscribed with the phrase, “To our dear friends, from your neighbors at Amazon.”

Amazon also created a dedication stone for the living center, inscribed with the phrase, “To our dear friends, from your neighbors at Amazon.” In the coming weeks, the company will plant a small tree outside the building.

“We really just wanted to show (the seniors) that they’re still valued in our community and really give them a tangible, sustainable gift that would brighten their day,” Amazon engagement area manager Ben Chatmas said.

Plans for the letter-writing project began at the beginning of April, according to Chatmas. He contacted St. Gertrude’s, hoping to create an initiative that would celebrate spring, reach out to residents and thank the living center’s staff for their continuous care during the pandemic and onward.

“My role was, ‘How do we go into the community, develop relationships with the local businesses and really dispel that myth that Amazon’s kind of just this big monolith in the middle of town that delivers your packages quickly?’ We really wanted it to be like Amazon’s a member of our community,” he said.

Yvonne Anderson, St. Gertrude’s marketing director, said she was excited to put together an opportunity for residents and employees to kick off spring.

“It was fun to know that someone was interested in doing something special for our residents, and it became just a fun opportunity,” she said. “I think they enjoy getting mail and getting cards … it’s special.”

Staff typically filled out the cards during their work breaks.

“It’s really just been such a team effort between our building, MSP5 down the road and all of the associates who participated in writing cards to show the seniors and our community how much we care about them and how much we value them,” Chatmas said.

Amazon worker Bill Sneden was one of the MSP1 staff members who helped write cards for St. Gertrude’s staff. Sneden said the initiative felt very personal for him and his co-workers since assisted living staff have taken care of many people’s family members.

“I don’t think there’s very many people whose parents, grandparents or great-grandparents haven’t been at an assisted living home or had some health care worker come and help them at their home,” he said. “The staff does not get the recognition that they deserve … and I just believe that they need some more.”

After completing and gathering up all the cards, Chatman and other Amazon workers visited St. Gertrude’s on May 2 to deliver letters and the dedication stone in person to residents and staff. About

St. Gertrude’s staff, Amazon employees and around a dozen residents spent the afternoon chatting over ice cream and opening the cards together.

“It means a lot that they think of us,” St. Gertrude wellness director Joni Horvath said. “We love being here every day and taking care of our people. The fact that (Amazon’s) acknowledging this in the community is just so important.”