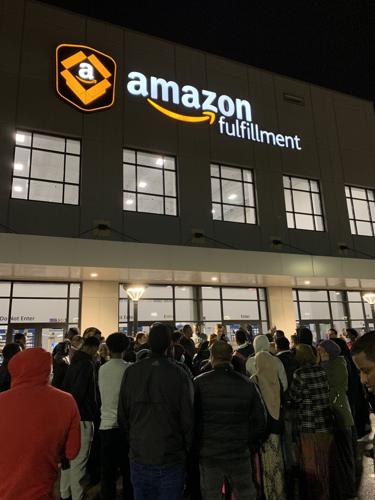 Workers gathered outside the Amazon MSP1 fulfillment center in Shakopee to protest low wages and lack of voluntary time off for Eid. 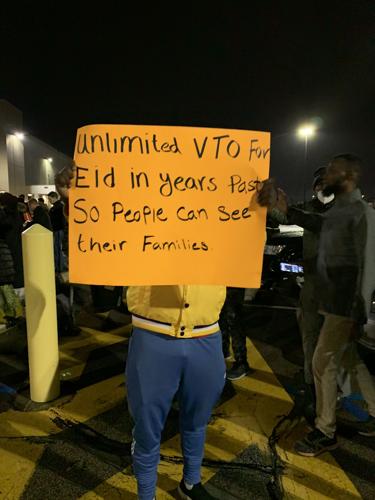 Some workers participating in the walkout made signs voicing their demands. This sign reads, “Unlimited VTO for Eid in years past so people can see their families.”

Workers gathered outside the Amazon MSP1 fulfillment center in Shakopee to protest low wages and lack of voluntary time off for Eid.

Some workers participating in the walkout made signs voicing their demands. This sign reads, “Unlimited VTO for Eid in years past so people can see their families.”

Amazon workers at the MSP1 fulfillment center in Shakopee staged a walkout the night of April 29, advocating for increased wages and time off for Eid, the Muslim holiday marking the end of Ramadan.

Around 100 staff members participated in the walkout, according to the Awood Center, an organization that supports the East African community in Minnesota. The fulfillment center has about 2,000 employees.

Employees are pushing for a wage increase of $3 per-hour for all workers. Amazon employee Tyler Hamilton alleges that overnight staff received this $3 increase for about five months up until the end of March. Workers also are asking Amazon to provide unlimited voluntary time off for Eid — something the Awood Center says Amazon has provided as an option in the past.

Walkouts have taken place at the fulfillment center in recent years, with workers protesting for better working conditions back in December 2018.

An Amazon spokesperson said managers communicate time-off policies with workers, but the company did not comment on the wage request.

Talk of planning a walkout initially began among employees about a week prior, according to Hamilton. He said he and other staff members created a group chat to get more workers involved and plan out the details.

A news release from the Awood Center states that workers also delivered a demand letter in English, Somali and Spanish to management.

Increasing wages was a main priority for those planning the walkout. Amazon employee Lusio Dhore said losing the $3 per hour increase has negatively impacted his financial situation.

“There was about an additional $800 every paycheck each month for five months … that’s a huge chunk of money taken away,” Dhore said. “The big reason we demand that $3 back is we provide so much more value than we are actually hired for.”

Amazon employee Jeremy Lane said many staff workers are feeling stressed and angry about their wages as inflation continues to rise throughout the country. “I know a lot of people that I talked to at work — we’re just struggling to get by,” he said. “I mean, it really shouldn’t be like that after you give a company years of your life.”

Hamilton shared these feelings, saying he and many of his coworkers feel like they are “falling behind” under current wage conditions.

“More people are living paycheck to paycheck,” he said. “People who commute a long way, they’re paying for all of that gas. People who need to feed their families, the cost of food keeps going up. The cost of rent keeps going up, it’s harder to pay your bills … it’s incredibly frustrating.”

TIME OFF FOR EID

Time off for Eid was another concern among staff workers. Employees are calling for Amazon to provide unlimited voluntary time off for Eid so people could spend the holiday time with their families.

According to Hamilton, voluntary time off, which is unpaid, does not count toward workers’ time-off balances, so they wouldn’t have to worry about losing those hours.

“They’re not giving workers that ability this year with VTO to see their families for Eid, which means to go and see your family on an occasion as important and as cherished as Christmas is for me, they’re forced to use their time off. This pushes them closer to being fired and adds to that stress and frustration,” he said.

In an email to Southwest News Media, Amazon spokesperson Richard Rocha said that managers communicated with employees the various leave options available for Eid, including paid time off and unpaid time off.

But multiple employees said communication is often rocky between managers and workers at the center.

“The communication is horrible. They don’t communicate things well at all,” Lane said. “I talked to a few co-workers that were talking about this, and they were pretty upset because they couldn’t get the time off to go and see their families.”

Workers gathered outside the fulfillment center, some with signs stating their demands for change.

“I’ve been here almost five years now … if you look at my pay and the compensation adjusted for inflation, every single year it’s gone down. They’ve never included adjustments for inflation, and look at inflation this year — we need this $3 an hour,” Hamilton said to his coworkers during the walkout.

Dhore said he considered the walkout a success and sees it as a catalyst for additional initiatives in the near future. “The general mood was very good, and we can use this one as a stepping stone for future organized walkouts,” he said.

Amazon HR told workers no one would be fired for walking out, according to Hamilton, but he alleges that the time spent off the clock was subtracted off employees’ time-off balances.

He added that workers can allegedly face termination if their time-off balance falls below zero hours. This has resulted in worry among employees thinking twice about participating in future walkout and protest initiatives, Hamilton said.

“You’re literally that much closer to losing your job when you wouldn’t be if they didn’t take your time off from you when you walked off … there’s a lot of workers who are worried and more stressed,” he said. “Now they’re scared they’re gonna lose their jobs because they walked out.”

Amazon did not respond to a Southwest News Media request for comment on these claims about how the company’s time-off policies could affect walkout participants.

“Our employees are the heart of Amazon, and we provide several ways for employees to raise concerns or provide feedback directly to us if they see room for improvement,” Amazon said in a statement to the newspaper.